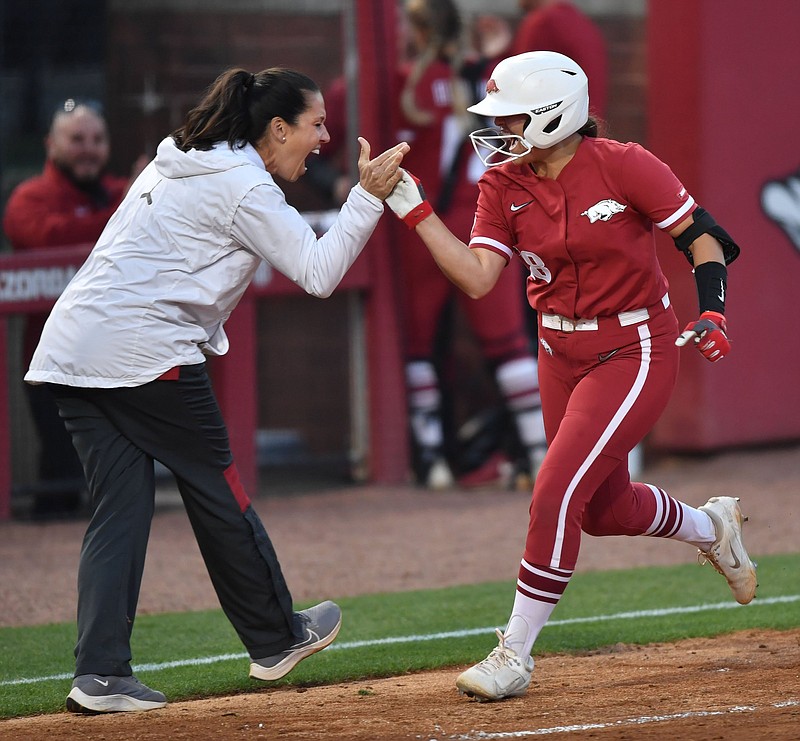 FAYETTEVILLE — On a night when upset-minded University of Central Arkansas had No. 7 University of Arkansas on the ropes, an unexpected hero delivered the biggest hit of the game for the Razorbacks.

In only her third at-bat of the season, Marlene Friedman stepped to the plate Tuesday night with Arkansas trailing by one run and a runner on third base in the bottom of the sixth inning. On a two-strike pitch, the sophomore from Huntington Beach, Calif., smacked a two-run home run over the left-center wall, lifting the Razorbacks to a 3-2 victory at Bogle Park.

“I was just mainly focused on my team,” Friedman said. “We have endless support from the girls and from the coaches, and my main focus was just doing it for my team, whatever it takes.

“It was definitely a team win. It was really hard, and we had to grind through it, but we never lost hope. Every one of us in that dugout knew we would come out on top, no matter what it took.” The Bears (28-17) controlled most of the game, largely due to junior Jordan Johnson’s pitching performance. The right-hander was dominant over six innings, allowing six hits.

Arkansas Coach Courtney Deifel, whose team swept Florida for the first time in program history last weekend, said her team was fortunate to win the game but was proud of the gritty victory.

“It was kind of lucky,” Deifel said. “I just really thought UCA played a great game. Johnson threw a heck of a game. We didn’t really make adjustments, and she just did a really great job controlling our offense. We ended up finding a way, scraping out a win. I’m really, really proud for Marlene just making the most of that opportunity. It was just a really big moment and I’m so happy for her.” UCA took a 1-0 lead in the third inning when Mary Kate Brown sent a chopper to second base, scoring Tremere Brown. The Bears would pad the lead an inning later, capitalizing on an Arkansas (36-8) fielding error, going ahead 2-0.

Callie Turner was the Arkansas starting pitcher, tossing 4 innings and giving up 2 runs on 5 hits.

After a leadoff single in the fifth by Tremere Harris, Deifel turned to Mary Haff for relief. She pitched three shutout innings to earn the win and didn’t allow any runners to reach base.

“Callie did a really great job,” Deifel said. “She’s going to use our defense and did exactly that. Then Mary came in and shut the door, and so I was just really pleased. They complement each other really well and were a good duo today. They gave us a chance to win today when our offense wasn’t always firing.” Arkansas scored in the fifth inning when Danielle Gibson sent a deep sacrifice fly to center to score Hannah McEwen, who had three of the Razorbacks’ six hits.

Deifel did not hesitate to go to her bench with the game hanging in the balance and Friedman promptly rewarded her coach with a clutch performance.

“It’s critical,” Deifel said. “You just never know what’s going to happen and we tell them that all the time. We tell them they have to be able to control what they can control, and that’s being ready when your name is called. You have no idea when that’s going to happen. We’ve called on her [Friedman] a couple times this season and she’s done such a great job each time. She works really hard, and I’m just proud of her.” The Razorbacks will carry a five-game winning streak into a home SEC series this weekend against South Carolina. First pitch from Bogle Park is scheduled for 6 p.m. Friday.