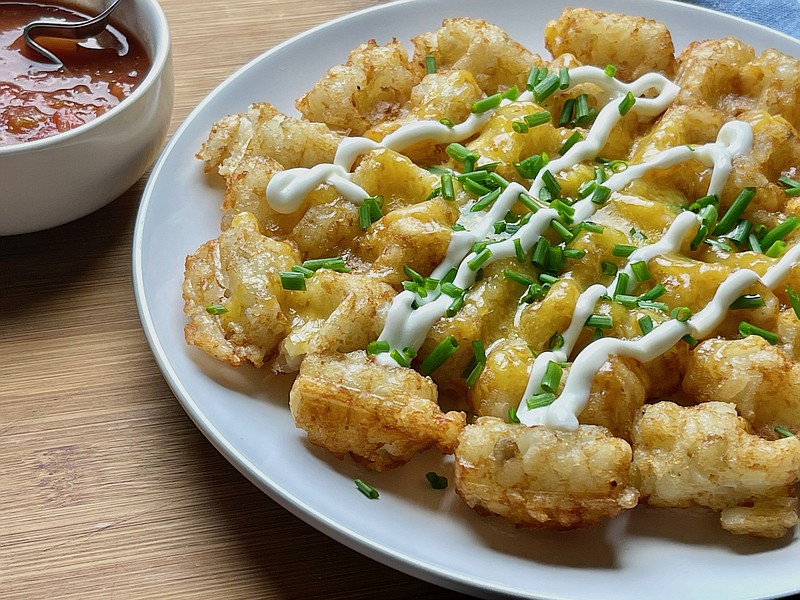 There are lots of reasons one might want to avoid eggs for breakfast.

Maybe you noticed a significant price increase at the grocery store. Maybe you or someone you cook for is allergic to eggs. Maybe you're trying to eat more plants. Maybe your teenager ate all of the eggs in your fridge. Or maybe you just don't like eggs.

With all of those in mind, we've collected a range of breakfast recipes that don't include eggs. It wasn't easy. Breakfast recipes in most American cookbooks tend to fall into two categories: eggs and sweets. And even then, many of those sweets include eggs: pancakes, waffles, french toast, Dutch babies and the list goes on.

We focused on things that can be prepared ahead or in roughly the same amount of time as it takes to cook a couple of eggs — ideally 5 to 10 minutes. (Your actual cooking times may vary.) The recipes include hot and cold oatmeal, a variety of toasts, no-bake granola bars and a new way to abuse your waffle iron.

These no-bake granola bars are best served from the fridge; as their texture is on the sticky and chewy side they won't hold up long at room temperature. Crisped rice cereal provides a pleasing contrast in texture against fiber-rich whole-grain oats. Nut butter and honey or maple syrup hold them together, boost the flavor and make them sweet, but not too sweet.

Line an 8-inch square baking pan with parchment paper. Combine the cereal and oats in a large bowl.

In a microwave-safe bowl or in a small saucepan, combine the nut butter, honey or maple syrup, cinnamon and salt. Microwave for 30 second increments or cook over medium-low heat, stirring frequently, until mixture is smooth. Pour mixture over cereal and oats; gently mix with a wooden spoon until oats and cereal are completely coated.

Spread mixture evenly into the prepared pan, pressing firmly to form a compact, even layer. Chill until fully set, about 30 minutes. Cut into 12 bars.

Vegans will want to use Miyoko's Cultured Vegan Butter for this recipe as it is the only plant-based butter that will brown and get nutty like dairy butter.

Eating soaked oatmeal, or overnight oats as it is more commonly known, can be a bit like diving into a bowl of soggy cereal. Toasting the oats in brown butter before soaking helps the oats retain a bit more of their chewy texture, which we think is a great improvement.

Melt the butter in a saucepan over medium-low heat until it foams and turns light brown. Add oats and stir for several minutes until lightly toasted.

For hot oats, add the water and/or milk, bring to a simmer and cook, stirring frequently, for 5 minutes or until oats are tender.

For overnight oats, after toasting the oats in the brown butter, divide them between two pint jars. Add ½ cup milk or water to each jar, cover, and refrigerate 5 to 12 hours.

This recipe requires a little planning ahead as the tots need to be defrosted before cooking. For tots that are ready to cook when you are, simply place the bag of tots in the fridge and let them thaw overnight. Otherwise, spread them out on a baking sheet and let them sit at room temperature for a bit.

These can be topped any way you like hash browns or baked potatoes. We went with the classic combo of cheddar, chives and sour cream. Pinto or black beans would also be excellent.

[Video not showing above? Click here to watch: arkansasonline.com/427breakfast]

Heat a waffle iron to medium-high heat. Lightly oil the top and bottom of the waffle iron.

Working in batches, arrange tater tots in a single, even layer on the grate of the waffle iron. For large, round waffles you'll need about 30 tots per waffle. Close iron, pressing down firmly to flatten, and cook until golden brown and crisp, about 6 minutes, or until desired crispness is reached. If topping with cheese, sprinkle it on the waffle immediately and then carefully transfer waffle. Repeat with remaining tater tots, adding more oil to the grate as needed. 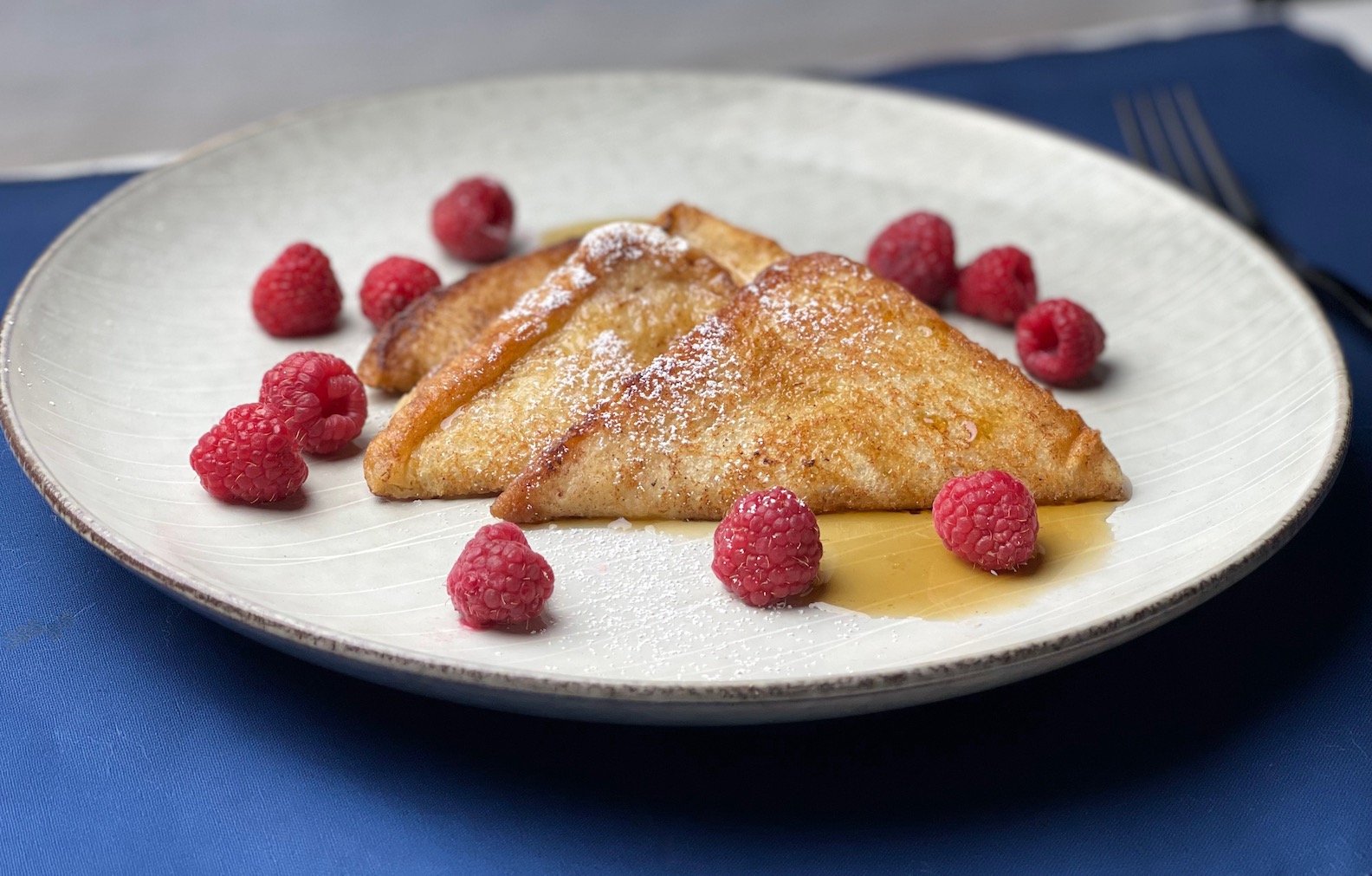 Buttermilk French Toast with maple syrup and fresh raspberries (Arkansas Democrat-Gazette/Kelly Brant)  This eggless french toast lacks the custardlike quality of the real thing, but if you view french toast as a vehicle for eating bread drenched in syrup, you won't miss it.

The formula for scaling this recipe is easy: 2 tablespoons buttermilk per slice of bread.

Melt a pat of butter over medium low heat in a nonstick skillet.

Meanwhile, in a wide shallow bowl or deep plate, combine the buttermilk and cinnamon.

Lay a slice of bread in the buttermilk and immediately turn it to coat. Remove from buttermilk, letting any excess drip off and transfer bread to the skillet with the melted butter. Repeat with remaining bread slice.

Cook soaked bread in buttered skillet, flipping after about 2 minutes, until golden brown on both sides. Serve immediately topped with a light dusting of confectioners' sugar, fresh fruit and maple syrup.

Note: If your bread is fresh, lightly toast it — just enough to dry it out, but enough not to color the crumb — before dipping in buttermilk. 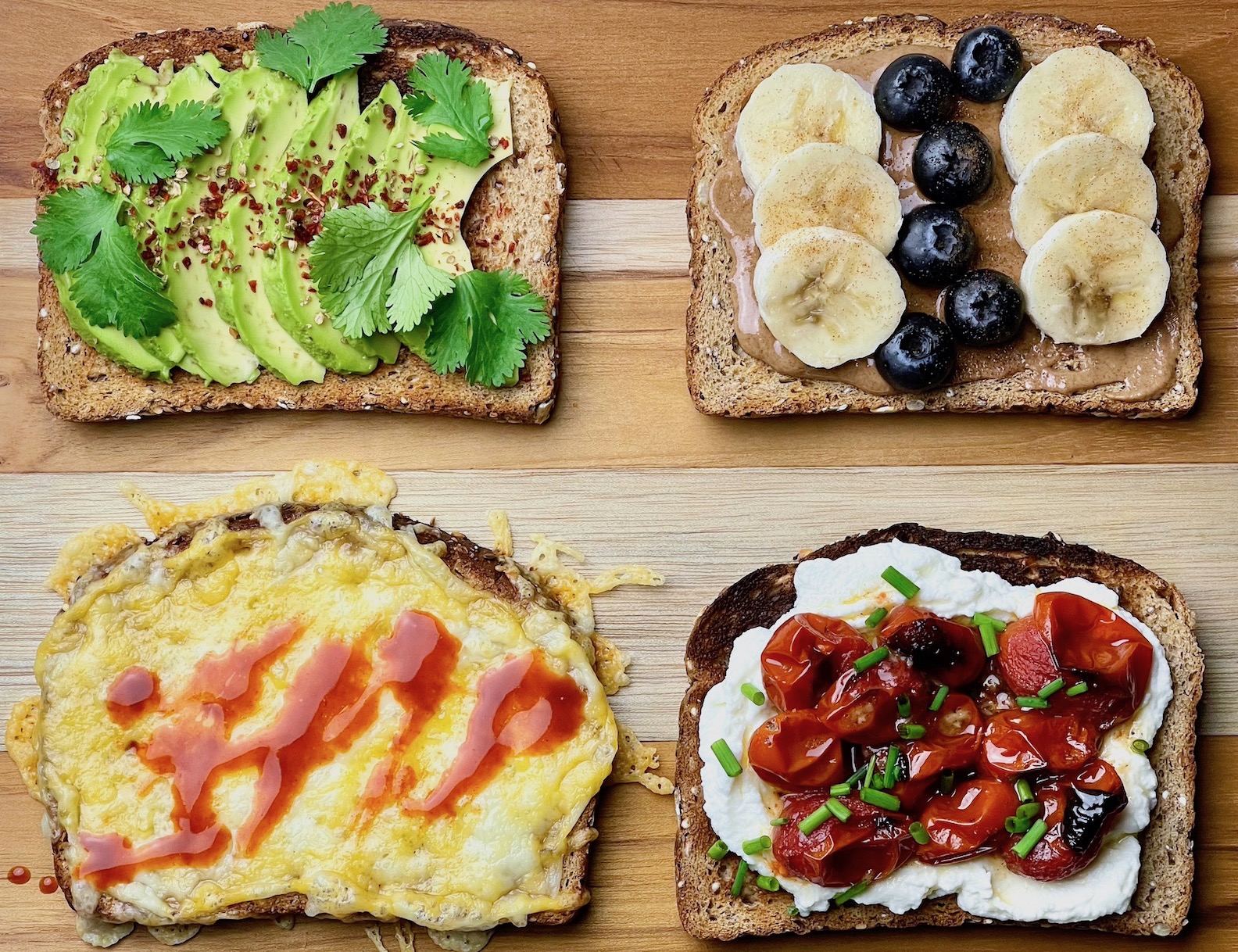 Place the tomatoes on a square of foil, crumpling the foil to create a bowl-like raft for the tomatoes. Drizzle the tomatoes with olive oil and season with salt and pepper. If desired add a bit of garlic paste. Mix well. Broil until tomatoes are blistered and a few have burst, about 5 minutes.

Slather the ricotta on the toasted bread. Top with the tomatoes and any oil and juices pooled in the foil. Sprinkle with chives. Serve right away.

Some people like chunky avocado on their toast, others prefer a smooth mash. For us it depends on what else is on the toast. If we're adding lots of things like diced tomato and cucumber, we want the avocado mashed so the stuff has something to "stick" to. If we're just having seasoned avocado, we don't mash it.

Top bread with sliced avocado, season as desired, (mash if desired) and then layer on remaining toppings. Finish with a squeeze of lemon or lime, if desired.

Heat oven or toaster oven to 375 degrees. Spread 1 side of bread with softened butter; sprinkle with ¼ cup shredded sharp cheddar cheese and ¼ cup shredded mozzarella cheese. Bake on a baking sheet until cheese melts and edges begin to brown, 8 to 10 minutes.

Spread bread with a mixture of butter and fig jam before adding cheese.

Add a few drops of hot sauce to the butter or drizzle on top after melting.