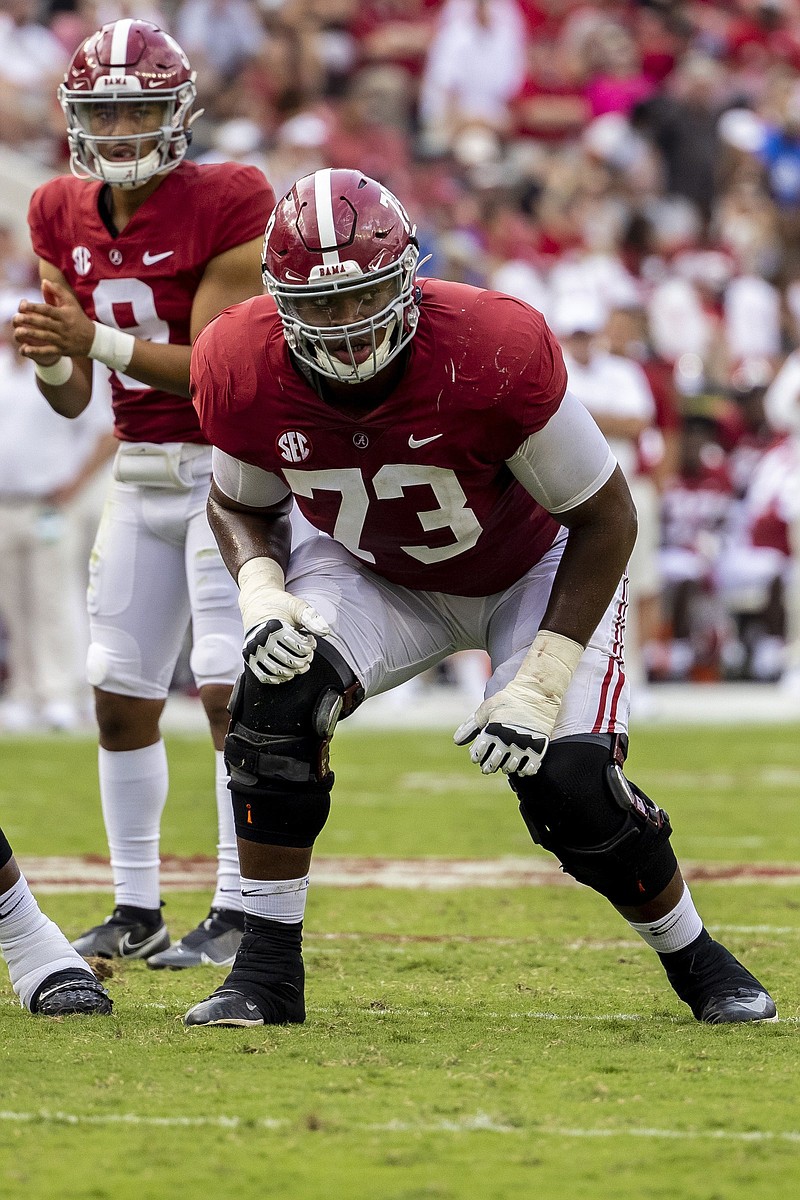 Alabama’s Evan Neal is projected to be the first offensive lineman taken in the Democrat-Gazette’s NFL Mock Draft with the New York Giants selecting him fifth overall. (AP/Vasha Hunt)

COMMENT It's a toss up for the Jaguars at edge rusher, but they'll take Walker, the first of a handful of Georgia stars in this draft.

COMMENT The Lions keep the former Wolverine in state and build their defense around him.

COMMENT Coach Lovie Smith gets his defensive building block, adding the former LSU star who has the potential to soon be an All-Pro.

COMMENT In the AFC East with great receivers Tyreek Hill (Miami) and Stefon Diggs (Buffalo), the Jets grab a player whose nickname will be loved by the New York headline writers.

COMMENT The Giants use the first of two top-10 picks to beef up their woeful offensive line.

COMMENT Offensive line is just as important of a need as quarterback for the Panthers.

COMMENT The All-American, who has top-three talent, finds his way to New York.

COMMENT The Falcons needed to improve their wide receiver group before the suspension of Calvin Ridley.

COMMENT Seattle's offensive line woes are too much to ignore here and Ekwonu comes in to start from Day One.

COMMENT Johnson turned himself into a top prospect in his only season at Florida State with 12 sacks.

COMMENT The Notre Dame star becomes the anchor of the Washington secondary.

COMMENT Kirk Cousins gets another receiving option alongside Justin Jefferson and Adam Thielen.

COMMENT The Ravens add one of the draft's top run-stuffers from the national champions.

COMMENT Philadelphia is hoping to give Jalen Hurts as much help as possible.

COMMENT It's a quarterback league and Jameis Winston isn't the long-term answer in the Big Easy.

COMMENT The AFC West is loaded with star QBs, so adding a player of McDuffie's caliber is key for the Chargers.

COMMENT The addition of Mitchell Trubisky in free agency isn't deterring the Steelers from landing a quarterback in the first round.

COMMENT Lloyd was all over the field for the Pac-12 champions in 2021.

COMMENT The former Warren Lumberjack and Arkansas Razorback lands in a great spot in Green Bay.

COMMENT Call this the replacement for Chandler Jones, who left in free agency.

COMMENT The Cowboys are not a legitimate Super Bowl contender until they address their offensive line.

COMMENT Ridder will backup Ryan Tannehill for a year, then take over as the starter in 2023.

COMMENT The Buccaneers add to their defensive line with Jones.

COMMENT Hill will contribute in multiple ways for the Packers.

COMMENT Dotson is not Tyreek Hill, but he'll be just fine in the Chiefs' offense.

COMMENT The Chiefs are high on this former Golden Gopher standout.

COMMENT The Super Bowl run proved why the Bengals must get better up front.

COMMENT Adding the high-character Dean is vital to the Lions' rebuild.