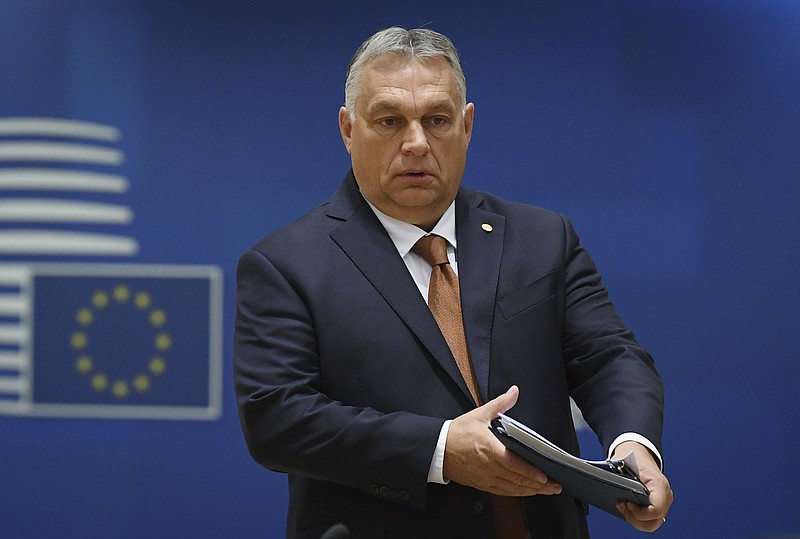 Hungary’s Prime Minister Viktor Orban arrives to a round table meeting at an EU summit in Brussels in October. (AP/Pool/John Thys)

BRUSSELS -- The European Commission has launched proceedings that could ultimately lead to the partial suspension of support payments to Hungary for breaching the 27-nation bloc's rule-of-law standards, the EU's executive arm said Wednesday.

The commission has given Hungary formal notification that marks the start of the process. The notice opens a round of discussions, and Hungary has two months to provide explanations and propose remedies.

The case marks the first use of a new mechanism allowing the EU to take action to protect its budget since the European Union's highest court ruled in February that the procedure had been adopted legally.

The commission said the main goal will be reaching an agreement so the process can be stopped. If not, the process will continue, and the commission would ultimately make proposals for EU members to consider.

The proposed measures, such as the suspension of payments or ordering financial corrections, would need to be proportionate on the basis of the impact of the breaches on the EU budget, the commission said.

A full suspension of EU funds is unlikely. Any action requires approval from a qualified majority of the European Council -- 55% of member states representing at least 65% of the total EU population.

The new tool does not target EU members for general breaches of EU law but was designed to protect the EU's financial interests from violations affecting the bloc's common budget.

The commission decided to move against Hungary because of concerns about the country's use of EU money, alleged lack of proper anti-corruption procedures and alleged breaches of EU law.

Hungary, a large recipient of EU funds, has come under increasing criticism over the past few years for veering away from democratic norms with policies such as exerting excessive control over the judiciary, stifling media freedom and denying the rights of LGBT people.

The rule of law mechanism, seen as the EU's most potent weapon to prevent a democratic rift from deepening within the bloc, was approved more than a year ago, but the European Commission waited until it received legal clearance before applying it.