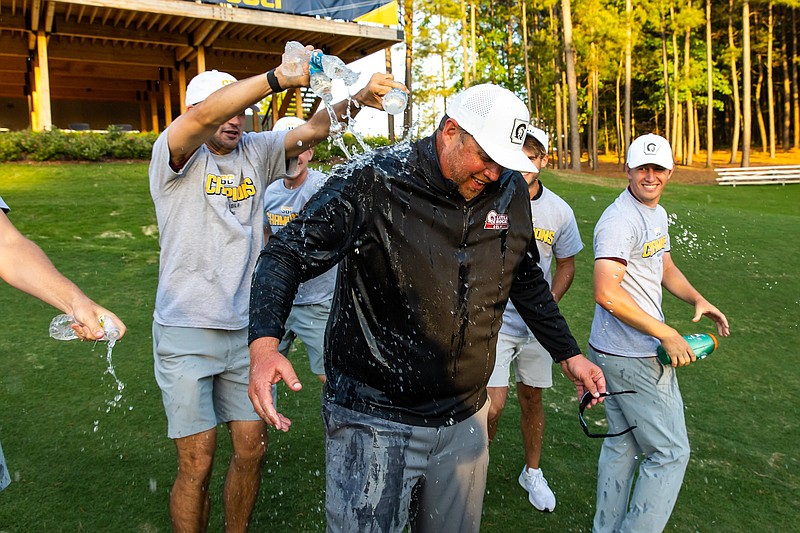 Jansen Smith didn't need anyone to tell him that his birdie on Mystic Creek Golf Course's 16th hole Wednesday evening was worth celebrating.

Two holes later, Smith didn't even have to swing his putter to set off another celebration. And this time, the Trojan junior wasn't reveling alone.

Smith's lengthy birdie late in the No. 3 match against Georgia Southern swung the momentum toward the University of Arkansas-Little Rock as the Trojans won 3-1-1 to claim the Sun Belt Conference men's golf tournament title in El Dorado.

Smith followed back-to-back birdies on 16 and 17 -- which moved him 1-down to 1-up -- with a tight approach on the par-5 18th, needing only a two-putt tap-in par to win his match against Hogan Ingram and give UALR its third point to clinch the third men's golf conference championship ever.

"It's been a long journey," Coach Jake Harrington said of a season that began in September. "We didn't have our best stuff yesterday, but I told the guys afterward, 'I'd rather get that out of the way yesterday.' And they came through in a big way today."

Yet Smith wouldn't have been poised to wrap up the Trojans' first crown since consecutive championships in 2000 and 2001 if not for the pair of veterans out in front.

Marcel Rauch had the lead-off duties in the afternoon following UALR's 3-2 win against Texas-Arlington in the morning semifinals. The senior from Germany seized control of his match with three birdies in the first four holes to go 3 up against Wilson Andress. A par on the 5th increased Rauch's lead to 4 up, and he was on cruise control the rest of the way, leading by multiple holes until he finished things on the 16th for a 3-and-2 win.

Nico Horder had an equally auspicious start in the No. 2 match. After both he and Georgia Southern's Colin Bowles parred the first, Horder gradually built his advantage, leading by four after seven holes en route to a 4-and-3 win.

For Rauch and Horder as well as Magnus Lomholt and Anton Albers, Wednesday's win was a redemptive one. Although they made the NCAA Tournament with an at-large bid, they lost to the Eagles in last year's Sun Belt tournament title match.

"We have four guys returning ... and they wanted it. They had a chip on their shoulder," Harrington said. "To be able to get it done this year is incredible."

The Trojans, who began the week ranked 43rd in the nation, knew their season wouldn't be ending at Mystic Creek so long as they reached Wednesday's match play.

But for Harrington, now in his ninth season, there was an added joy in capping UALR's Sun Belt run with a trophy.