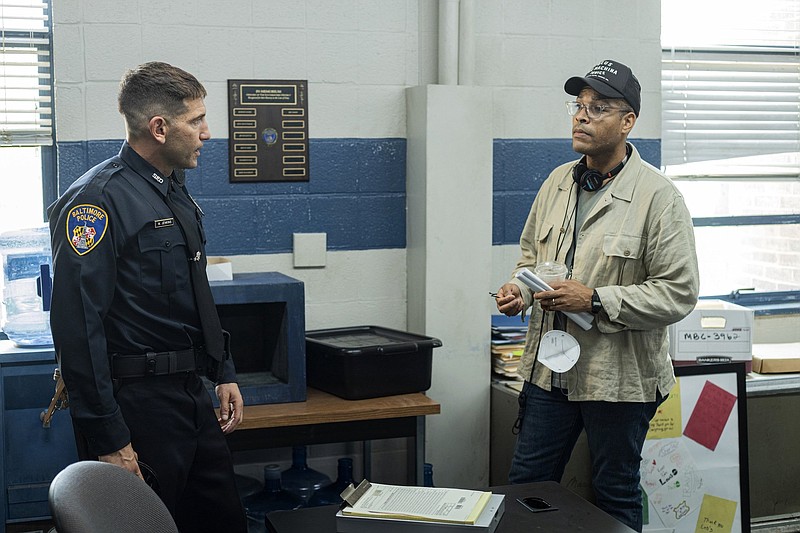 Jon Bernthal and Reinaldo Marcus Green star in HBO’s “We Own This City,” a companion to the hit show “The Wire.” (Paul Schiraldi/HBO)

The first two episodes of HBO's new police drama "We Own This City" — which debuted Monday — introduce a dead man riddled with bullets in an alley and a drug lord whose wares seem to be leaving behind a trail of bodies, but the real mystery is something else altogether. The miniseries takes its title from a declaration uttered not by criminals but by a Baltimore cop, Wayne Jenkins (Jon Bernthal), who rises through the ranks while planting drugs, committing assault, stealing from lawbreakers and ordinary citizens alike — and showing his fellow officers how to get away with it all. The big question isn't what he did but why his superiors considered him their "golden boy" and turned a blind eye to his misdeeds for nearly a decade and a half.

Adapted by David Simon and George Pelecanos from former Baltimore Sun reporter Justin Fenton's nonfiction book, "We Own This City" is a spiritual sequel to "The Wire," exposing and deploring the institutional rot that renders reform just about impossible. Freddie Gray's name is invoked early and often, though less as a victim of police brutality than a temporal marker after which law enforcement dug in its heels even harder against reform while residents grew ever more suspicious of them. In the opening scene, Jenkins stands at a lectern, discouraging other officers from using excessive force — and in the next one threatens to beat someone up with a baseball bat. According to the show, the only real achievement of the political energy around police in the past few years might be their newfound adeptness at parroting the talking points the public wants to hear.

Executive Producer Pelecanos displays no shortage of ambition. "We Own This City" is a portrait of how police corruption destroys a city: draining its coffers to pay settlements, disillusioning the citizenry of its leaders and institutions, and emboldening officers to act without regard to law or morality. Baltimore is its case study, but as one of the show's preachy monologues makes clear, a Jenkins could happen anywhere. That impression is bolstered by the series' similarities to "The Shield," the FX police thriller that took inspiration from Los Angeles' late-90s Rampart scandal.

By 2017, Jenkins is the leader of the Gun Trace Task Force (GTTF), a rogue unit within the Baltimore police department that ostensibly targets drug crimes. The elite squad actually comprises some of the city's worst offenders. Several of its officers have already been penalized by internal affairs for misconduct, like the smoothly opportunistic Jemell Rayam (a scene-stealing Darrell Britt-Gibson). Others are on a list of cops no longer allowed to testify in court because of their history of perjury, like the pugnacious, born-to-bully Daniel Hersl (Josh Charles playing against type). Still others openly aspire to live like their criminal associates, like the swaggering Momodu "G Money" Gondo (McKinley Belcher III).

Like other shows by Simon and Pelecanos, "We Own This City" isn't a particularly inviting world to enter. There are dozens of characters (some played by familiar faces from "The Wire"), and the scripts are heavily peppered with statistics and unexplained jargon and acronyms. The first couple of chapters are especially — and to be frank, unnecessarily — opaque, jumping between timelines with little payoff. The remaining installments are structured around interviews, either by the pair of investigators Erika Jensen (Dagmara Dominczyk) and John Sieracki (Don Harvey) working to take down the GTTF or the federal civil rights attorney Nicole Steele (Wunmi Mosaku) hoping to make the case for a bigger overhaul of the BPD via consent decree.

"We Own This City" is closer to a Simon-Pelecanos also-ran than another masterwork a la "The Wire." (The look of this series, from director Reinaldo Marcus Green of "King Richard," does strongly recall that predecessor's drab realism.) Six hours may in fact not be a large enough canvas for all that the writers want to accomplish — especially their efforts to shoehorn observations about how policing has changed after Gray's death in 2015. The interviewers elicit confessions from the dirty cops a little too easily — though, satisfyingly, there's no honor among thieves, the reckless profligacy of Jenkins' thefts stirring an unexpected self-disgust among his troops. The series may be most effective when the investigators talk to the victims of GTTF's mayhem, as the human cost of police brutality on everyday people piles up.