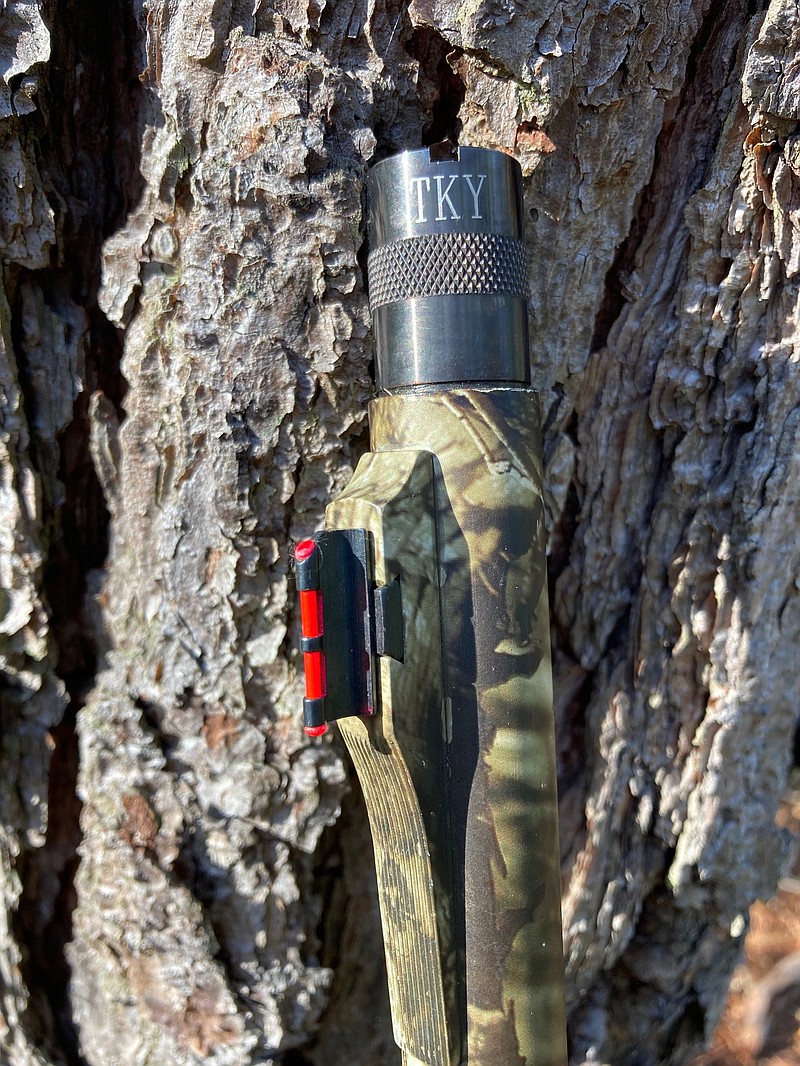 What a weird turkey season this has been.

I missed opening day because I procrastinated too long on my taxes. Then the rains came. I don't hunt in the rain. I will fish in the rain, but hunt? No. Then came a two-day bout with a stomach ailment Thursday and Friday, followed by a packed family schedule for the weekend.

So opening day for me was April 25, and I almost made up for lost time in moments.

It was an afternoon hunt in a place where I killed two gobblers in 2021. As I walked down a grassy lane, I blundered into two turkeys hidden in tall grass. They flushed like pheasants. One was a hen and the other was a tom. They flew different directions, so I slipped a short distance into the woods toward the hen and plopped down against a big pine tree.

I waited about 10 minutes and began yelping softly on a diaphragm call, betting that the turkeys would be eager to reunite. Sure enough, the hen answered my calls and approached slowly. Shortly after, the gobbler yelped from the other direction. They were going to meet about 25-30 yards away, a chip shot for my Winchester SX3 20-gauge and its potent load of Tungsten Super Shot.

Like many of my grand designs, this looked great on paper, but it didn't not account for a crucial variable. Having established vocal contact, the turkeys drifted beyond the danger zone and zipped their lips when they linked.

On Tuesday, I arrived before dawn and reveled in the celestial summit between Jupiter, Saturn, Mercury, Venus and the moon. This convocation of heavenly giants portended a momentous turkey hunting morning.

Despite having not seen in it in a year, I managed in the dark to find the exact spot where I sat when I killed my second gobbler of the 2021 spring turkey season. I remembered every moment of that grand encounter. I called up a hen and gobbler that strolled right up to my decoy, and before I had time to take my first sip of coffee, the 2021 season ended with the best possible outcome.

Tuesday's result would have been identical had I brought a decoy. I took stock of my turkey hunting methods before the season and decided that I make it way too complicated. I don't need to take an entire sporting goods store worth of calls into the woods. I don't need all the other junk, excuse me, gear, that I carry. I believe I've gotten competent enough to not need a security blanket of excessive gear.

I wanted to travel light, which meant one of two bulky items would have to stay in the truck. I could take my decoys, which require a separate backpack, or I could take my ground chair. I'm sorry, but comfort is going to win that debate every time. There is no call to be tougher than you have to be.

Except for Tuesday. I needed to be tougher on Tuesday.

As we say in Arkansas, I was tickled to death to find my proven turkey killing spot in a vast tract of woods that contain no defining features. It's almost as indistinct as being in the flooded timber at Bayou Meto Wildlife Management Area. If you don't know where you are, it might take you awhile to get back out.

At about 6:30 a.m., turkeys surrounded me. They clucked and yelped no more than 40 yards away, but I never saw them. Like the two turkeys on Monday, they drifted away unseen.

At about 7:15 a.m., a hen yelped softly behind me. I quietly repositioned my seat and yelped in response. The hen cutt sharply, and I answered her, provoking the longest insult-a-thon I have experienced with a turkey. Whatever I said triggered the hen grievously. She cutt nonstop for almost two minutes without changing pitch and seemingly without breathing. I was right with her, note for note, except I spiced mine with angry purrs for a touch of French vulgarity.

In the distance, a gobbler yelped in protest. This was going to be a classic femme fatale ambush. This ticked off hen was going to march up to teach this mouthy interloper a lesson, and the hapless gobbler would follow her into a trap of her own making.

That's exactly how it would have gone down had I been a little tougher. The hen would have come to a decoy. Instead, she crisscrossed the side of a gentle slope below me. I watched her head bob up and down in the grass as she stalked back and forth. If the gobbler was near, I didn't see him.

My soft purrs and feeding whines did not persuade the hen to ascend the hill. Eventually she got tired of looking and vanished in the direction from which I heard the gobbler yelp.

All of this activity made me ecstatic and confident that a gobbler would show up eventually. With that many turkeys about, how could one not?

At about 8 p.m., my eyelids grew heavy. Getting up at 3 a.m. will do that to you. I felt that heavy sensation of falling through a dark void as I slipped into a short but intense sleep. All of my senses shut off at times like that except for my hearing. A deep cluck roused me instantly back to awareness. I didn't dream it. That was a gobbler.

I pondered it for another hour, slowly coming to the bitter conclusion that those flapping wings were the sound of the curtain closing on this exciting but decidedly unsatisfying act.

I acknowledged this reality by removing my face net and exposing my face. I removed my Thermos from my vest and slugged down its liquid life. I looked at the spot where I would have placed decoys and concluded that it would take two trips to get them, a ground chair, and a gobbler back to the truck. Maybe even three trips because the ground chair goes where I go, decoys or not. It's not negotiable.

Three trips through mud, long expanses of ankle-deep water and an increasingly thick cloud of gnats. The thought of it made my knees and ankles sore.

It would have been worth it.