Officials hope to avoid widespread outbreak like Shanghai’s by The Associated Press | April 29, 2022 at 3:16 a.m. 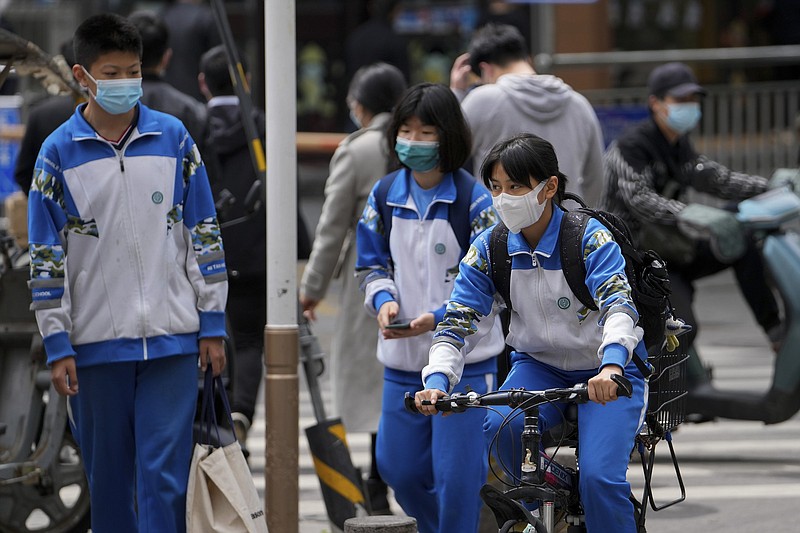 BEIJING -- Beijing is closing all city schools in a further tightening of covid-19 restrictions, as China's capital seeks to prevent a wider outbreak.

The city of 21 million has already ordered three rounds of mass testing this week, with the third coming today.

On Thursday, the city's Education Bureau ordered all schools to end classes from today and said it hadn't determined when they would resume.

It also wasn't clear whether schools would be able to offer classes online or allow students facing crucial exams to return to class.

Beijing announced 50 new cases on Thursday, two of them asymptomatic, bringing its total in the latest wave of infections to around 150.

Students make up more than 30% of total cases, with clusters linked to six schools and two kindergartens in Chaoyang.

Also Thursday, residents of two housing compounds in Beijing's Chaoyang district were ordered to stay inside and some clinics and businesses shut down.

Beijing has moved more swiftly than many Chinese cities to impose restrictions while case numbers remain low and the scale of the outbreak is still manageable.

The goal is to avoid the sort of sweeping measures imposed on Shanghai, where the highly transmissible omicron variant has torn through the city of 25 million. Restrictions confining many Shanghai residents to their homes are now in their fourth week and all schools have been online since last month.

The National Health Commission on Thursday reported 11,285 new cases across mainland China, most of them asymptomatic and the vast majority in Shanghai, where an additional 47 deaths were reported.

Shanghai city authorities said Wednesday they will analyze the results of new rounds of testing to determine which neighborhoods can safely expand freedom of movement for residents.

Shanghai is seeking to achieve "societal zero covid" whereby new cases are found only in people who are already under surveillance, such as in centralized quarantine, or among those considered to be close contacts.

While China's overall vaccination rate stands at around 90%, just 62% of people over 60 have been vaccinated in Shanghai, the country's largest and wealthiest city. Health workers have been visiting elderly residents at home to administer vaccines in a bid to boost that figure, the city's Health Commission said Thursday.

Taiwan, which had been living mostly free of covid-19, is now facing its worst outbreak since the beginning of the pandemic with over 11,000 new cases reported Thursday.

Cases have been on the upswing since late March. In April, the island's central authorities announced that they would no longer maintain a "zero-covid" policy like the Chinese government's in which they would centrally quarantine positive cases.

Instead, the government is asking people to quarantine at home if they test positive, unless they show moderate to severe symptoms.

Chen Shih-chung, the island's health minister, announced Thursday they had found 11,353 new cases, along with two deaths. During the daily press briefing held by the Central Epidemic Command Center, he said 99.7% of the cases in the current outbreak either had no symptoms or had mild symptoms.

Most of Taiwan's 858 covid-19 deaths came from summer 2021. Until this month, it had been the island's one major outbreak in the pandemic.

Experts are worried about the 5 million people who have not been fully vaccinated against covid-19.

Those who did not complete a full vaccination course are four times more likely to get moderate or severe symptoms compared to those those who have gotten a booster, said Ho Mei-Shang, a vaccine expert in Taiwan who has also worked for the U.S. Centers for Disease Control and Prevention, according to Central News Agency.

Most vulnerable in Taiwan's outbreak this time are children and the elderly. The vaccination rate among people over 75 is 72.5%. However, only 59.1% in the same age group received a booster.

Society's youngest are also not protected. Some schools have switched back to remote learning based on the number of positive cases each school is reporting. The island is opening up vaccine shots to children ages 6-11 next week.

A 2-year-old boy in New Taipei City died last week, the youngest victim of covid-19 in Taiwan. His condition deteriorated rapidly after testing positive in a rare case.

Still, officials urged the public not to panic, saying that Taiwan was better prepared with vaccines and ways to ensure moderate and severe cases would get prompt attention.

"We want to tell the public, from the medical world, please rest assured," said Chiu Tai-yuan, a lawmaker who also heads the Taiwan Medical Association. "Last year's outbreak situation is not like the one we face today."

Information for this article was contributed by Ihuizhong Wu of The Associated Press. 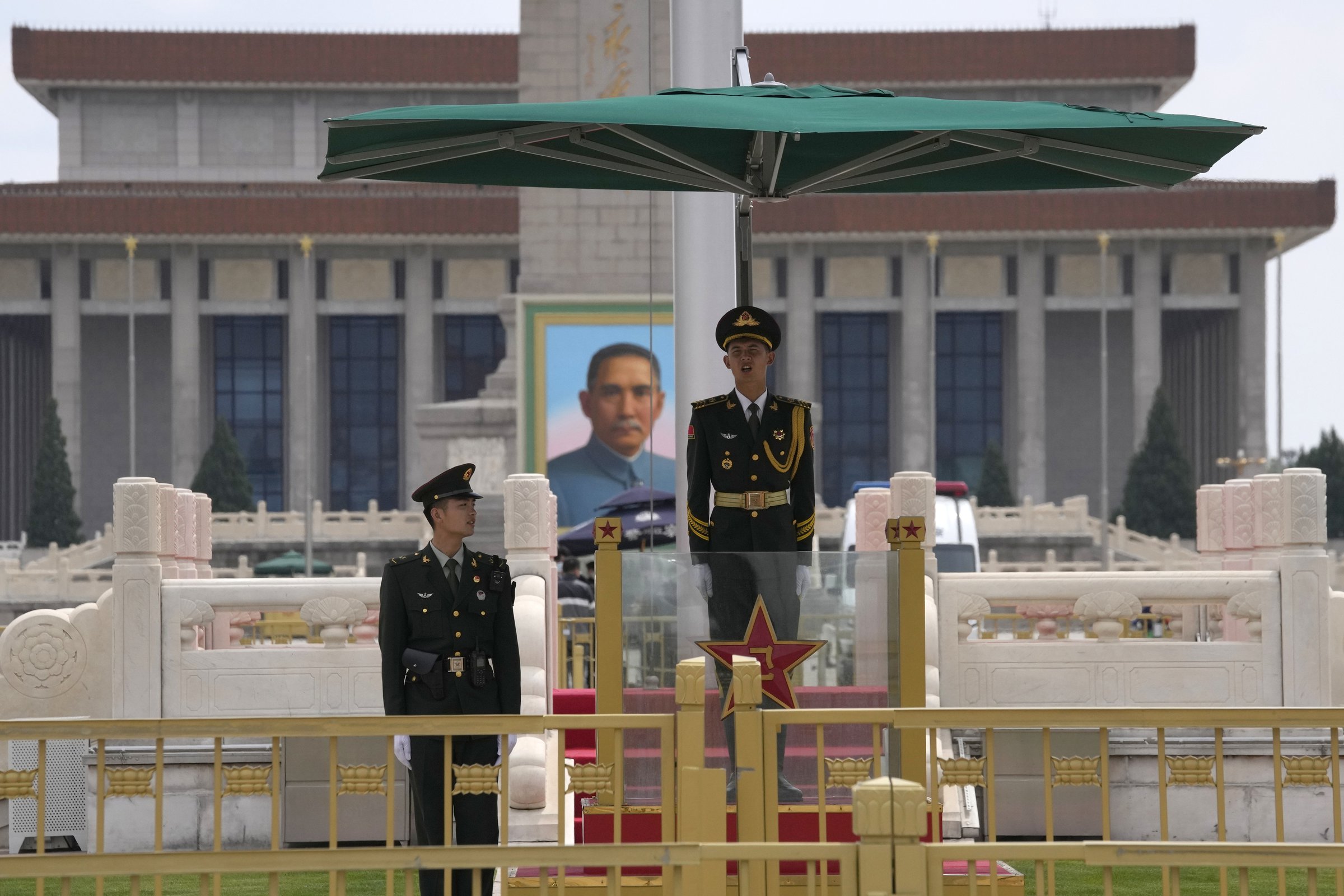 Members of an honor guard stand on duty in Tiananmen Square on Thursday in Beijing. With the May Day holiday just around the corner, Beijing has been tightening covid-19 restrictions as it seeks to prevent a wider outbreak. (AP/Ng Han Guan)