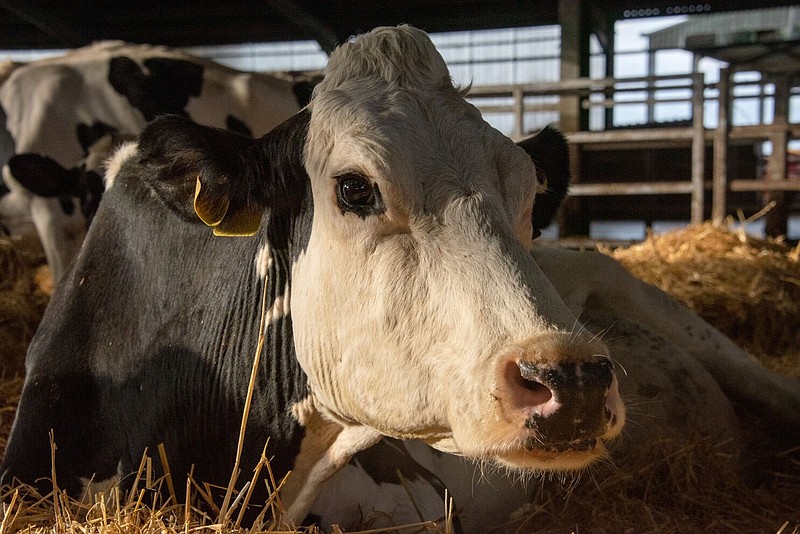 Luma, better known as cow no. 1129,” is the British Holstein protagonist of Andrea Arnold’s documentary “‘Cow,” which tracks her life on a dairy farm in Kent in the U.K.

Sharing a spiritual and conceptual similarity with Viktor Kosakovskiy's "Gunda," Andrea Arnold's documentary "Cow," about the day-to-day life of a dairy cow on an English farm, avoids politicizing its subject. Instead, it strikes a tone of organic profundity in its depiction, making neither comment nor voicing opinion. In this, Arnold presumes simply showing the life of her cow (known to us until the very end as the "1129," branded on her hind legs), and her service to the farm, will be enough to make her point.

In this, she's absolutely right. Even given my strong pro-animal welfare biases, the film is deeply moving. It would be nearly impossible to watch the life of 1129 and not come to understand the sacrifices she is forced to make for us to enjoy the wealth of what she provides.

The film opens with the birth of yet another calf from 1129, who is given only a few hours with her offspring before they are separated from her and put into a pen on a different part of the farm. From there, over the course of several seasons, we watch 1129 go through the regimented course of her life, pregnancy/birth/milking on repeat. Along the way, Arnold's camera captures singular moments of shimmering beauty: The cows out in the fields, staring out at the stars contemplatively in twilight; a group of young calves cavorting and nuzzling each other as they race around their stalls, some sense of the lives these creatures share together on their part of the world.

On one occasion, during the summer as 1129 is at last allowed to go out into the pasture and roam, we get to see a most perfect sort of day for her, the sun warm, the grass long and dark, the air glowing in soft, damp light, and her sleeping peacefully under the stars. Naturally, this beatific scene is contrasted with the harsher metal gates and muddy wood blocks of her stall -- though it should be noted this dairy farm is a smaller family business, and the care given the herd appears to be genuine. As she makes her way through the repetition of her days, and seasons, we come to some greater understanding of her existence.

As with "Gunda,'' the pleasure of watching the film, as beautiful as it often is, remains laced with a strong sense of foreboding -- a farm, we can all understand, however peaceful, is still in the business of maximizing profit from living, feeling creatures -- a misery that very much comes to pass by the end, but not before forcing viewers to find a kinship with a creature they might have been able to ignore otherwise.

It's not a PETA video, appealing to your emotional vulnerability, or trying to convert you to a cause you might well not believe in. It is instead a work of profound empathy, finding in 1129, a sweet and docile creature who gets to enjoy her time on this earth in fits and starts, in kinship among all the rest of us living things.