‘The Bad Guys’ shows off an animated Los Angeles 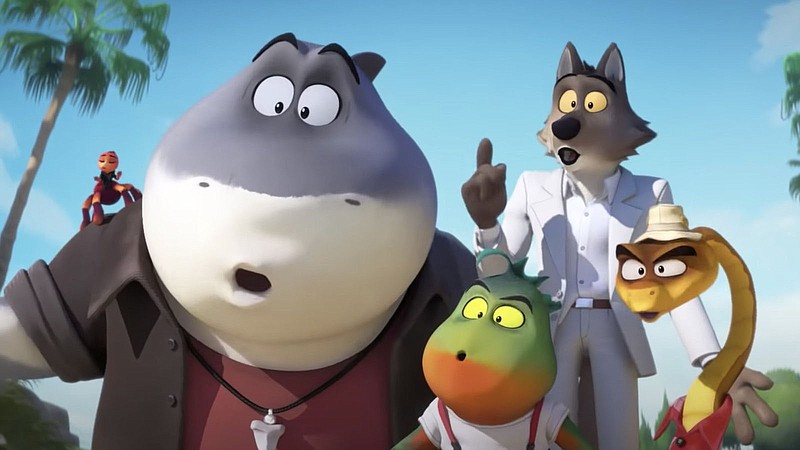 LOS ANGELES -- DreamWorks Animation's "The Bad Guys" opens with what seems like a routine meet-up between best friends.

But Wolf and Snake are not just ordinary pals -- they're part of a close-knit gang of notorious criminals about to rob a bank. The job quickly leads to a spectacular car chase throughout a version of Los Angeles unique to animation.

Out now in theaters, where it outperformed expectations and hit No. 1 at the box office on opening weekend, "The Bad Guys" marks Perifel's feature directorial debut. Written by Etan Cohen, based on the popular books series by Aaron Blabey, the film follows a gang of five -- Mr. Wolf (Sam Rockwell), Mr. Snake (Marc Maron), Ms. Tarantula (Awkwafina), Mr. Shark (Craig Robinson) and Mr. Piranha (Anthony Ramos) -- after a heist gone wrong forces them to try being good guys for a change.

As it introduces the main players and the overall energy of the movie, the opening car chase zips viewers through neighborhoods immediately recognizable to those familiar with L.A.'s various locales. Wolf burns rubber through the areas inspired by downtown, Mid-City and Echo Park during the getaway. The Bad Guys' lair is even located under what resembles the Sixth Street bridge that crosses the L.A. River.

When Perifel first stumbled across "The Bad Guys" on producer Damon Ross' desk, the film was not set in Los Angeles. But the French filmmaker's love for the city where he has been based since 2008, as well as his appreciation for L.A.-set classics such as Quentin Tarantino's "Reservoir Dogs," "Pulp Fiction" and Michael Mann's "Heat," led to the film's ultimate setting.

"It's not immediately a city that you understand, aesthetically speaking," said Perifel, whose initial impression of L.A. was that it's architecturally diverse with no discernible structure compared to older European cities, or even those on the East Coast.

In addition to paying homage to classic L.A.-set gangster films, Perifel wanted to "tap into the L.A. that wasn't just the Hollywood sign and the beach" and showcase the sides of the city beyond the obvious tourist-oriented landmarks.

Overall, 10 different L.A. area neighborhoods -- including Highland Park, Elysian Park, Miracle Mile, Malibu, Santa Monica, Chatsworth and Century City -- served as the visual inspiration for the version of the city in the movie. And that's not to mention L.A.'s freeways, which are almost a location of their own.

Unlike live-action, incorporating a real city into an animated movie takes more than just heading to a specific location and filming there (though plenty of live action movies use other cities as stand-ins).

Partly due to the legalities involved in reproducing architectural works, the "Bad Guys" team did not actually replicate any specific L.A. locations. Instead, they had the "more fun" task of reinventing the city, according to production designer Luc Desmarchelier.

This involved "com[ing] up with elements," said Desmarchelier, such as "single buildings [and] street props like billboards, palm trees, telegraph posts ... to create a library of individual objects and assembl[ing] them in sets that evoke a certain neighborhood in Los Angeles or can give a certain vibe of a real place that has been re-created as opposed to just copied."

And because the goal was capturing the "visual flavor" of the city, not everything had to make geographic sense.

For example, astute viewers will notice that "it doesn't matter which way [the Bad Guys] are headed [during the car chase], you always have the downtown silhouette in the distance," Desmarchelier said. "It's like a visual signature."

Avoiding exact copies of specific locations also reflects Perifel's artistic sensibilities. The director, who started in traditional 2D animation, wanted the movie's look and animation to be more stylized -- like illustrations and paintings done by hand -- than realistic animation that resembles live action.

Anime such as "Sherlock Hound" and "Lupin III" as well as the French-Belgian "Ernest & Celestine," influenced the approach to the characters in "The Bad Guys." To match the playful charm of the character designs, the film's action bends the rules of physics for heightened effect.

Because the characters are so stylized, "we [also] wanted to have the same kind of stylization in the background," said art director Floriane Marchix. This meant not only designing structures or other elements with a more illustrative approach but also having them rendered "more sketchy" and impressionistic the farther they are in the background.

"Everything is not as crisp anymore" when they are farther away, Marchix said. "It starts to look more like a painting."

When drawing by hand, artists can choose where to focus details and how much to include or remove to achieve the desired balance. But because 3-DCG animation has traditionally pushed toward realistic renderings with extreme detail, existing digital tools were not built with making such aesthetic choices in mind.

Part of the process for "The Bad Guys" team was removing unwanted details, as well as adding some 2D-inspired line work, to achieve the look they wanted. Marchix describes it as a delicate balance.

"People don't realize very often that it's sometimes way more easy nowadays to do something with tons of detail everywhere" because of the available tools, Marchix said. "It takes a lot of time and energy to dismantle that, to actually make something that looks simple and tasteful."

Perifel is hopeful that the winds in 3-DCG animation are shifting after the pinnacle of realism reached in "The Lion King" remake as well as the paradigm-busting "Spider-Man: Into the Spider-Verse."

"To me, it's always been obvious that we should start to have more creative license in how we display those visuals," Perifel said. "I can see the trend within the whole animation industry [is] 'Let's now open new doors,' and I'm so happy about it."