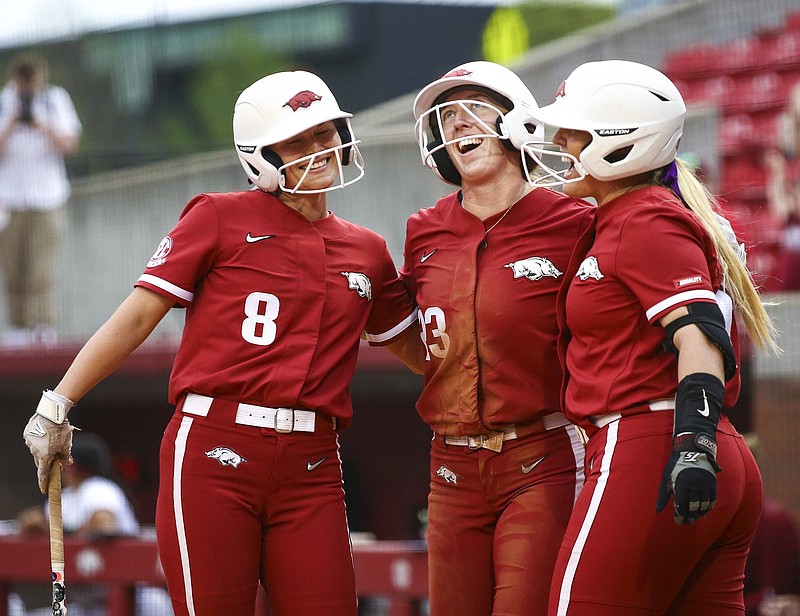 FAYETTEVILLE -- Arkansas (37-8, 15-4) put its foot on the gas early and never let up, blanking South Carolina 12-0 in five innings on Friday night at Bogle Park.

The Razorbacks set the tone in the first inning to the tune of eight runs. Eight of Arkansas' 13 hits came in its first time to the plate.

"I thought we approached this game very business-like," Arkansas Coach Courtney Deifel said. "It's always good to jump on another team right away. I felt like we just kept the momentum on our side. I really liked our focus throughout, and it was a really great start to a series."

The big first inning was highlighted by a three-run home run from senior Linnie Malkin that landed in the parking lot past the grass berm. Malkin, one of eight seniors playing in their final regular-season home series this weekend, drove in three runs on two hits. The homer was the 43rd of her career in a Razorback uniform.

"I just love the sound off the bat," Malkin said. "It's just a lot of fun. Going into this game I just wanted to stay really relaxed and everything as always. Us fifth-years we've been through a lot with this program. Just seeing people come support our team, the fans are just amazing and super supportive."

Malkin's home run wasn't the only homer in the first inning. Two at-bats later, Audrie LaValley sent a solo shot over the right-field wall, her fourth of the season.

Senior Hannah McEwen had a productive day batting. She went 3-for-3 with three RBI. A triple in the third inning from McEwen turned into an in-the-park score off a South Carolina throwing error.

Seven different Arkansas hitters recorded a hit, with KB Sides matching McEwen's game-high three. Deifel said she was proud to see many of her seniors put up a big performance.

"I literally don't have words to express how proud I am of them," Deifel said. "Not just tonight, but just over the course of their careers. It's not just what they've done for us on the field, but what they do and who they are off of it is even more impressive."

Redshirt junior pitcher Chenise Delce was dominant and got only stronger as the game went on. The reigning SEC and National Pitcher of the Week tossed all 5 innings, struck out 9 and allowed 2 hits in the win.

"I went in thinking don't let up, and just go as hard as you can," Delce said. "I pretty much go into all of my games like that. It feels great because the seniors have all worked really hard for this team. I just wanted to work hard for them and give them a great ending to their career."

Arkansas will look for the series win today at 1 p.m. today. The game will be streamed on SEC Network-Plus.

Southern scored 10 unanswered runs over the fourth and fifth innings to down the University of Arkansas at Pine Bluff at Lady Jaguar Field in Baton Rouge.

Destiny Hernandez had two hits and drove in two runs for Southern (12-32, 9-13 Southwestern Athletic Conference), which faced a 2-0 deficit in the fourth until rallying in the bottom of the inning. After Alissa Castaneda's run-scoring hit cut the Jaguars lead in half, Londyn Lau ripped a two-run single to give Southern the lead. The Jaguars then scored seven runs in the fifth to blow the game open.