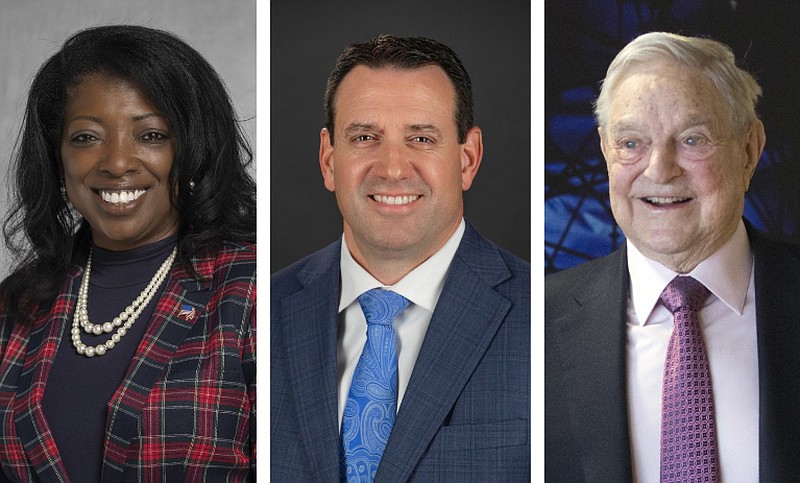 From left, Alicia Walton, Will Jones and George Soros are shown in these undated file photos. (Left, center, special to the Arkansas Democrat-Gazette; right, Olivier Hoslet, Pool Photo via AP)

George Soros, the billionaire philanthropist and Democratic donor, is putting money behind Alicia Walton's race for prosecuting attorney in the state's 6th Judicial Circuit, which includes Pulaski and Perry counties.

Walton said it's news to her.

She was busy putting out campaign signs Friday afternoon when a reporter called.

"He hasn't made a donation to us," she said.

"She knows people are worried about their kids' safety and don't trust the system to treat everyone fairly," says the male voice of the radio ad. "It's time for a change. That's why she supports reforms to make our communities stronger, safer and more just. As our next prosecuting attorney, she'll prioritize violent crime, expand diversion programs that save taxpayers money, and make sure kids who make mistakes don't become hardened criminals. She'll ensure there is one standard of justice so everyone is treated fairly and no one is above the law. Vote for stronger, safer communities. Vote Alicia Walton for prosecuting attorney. Paid for by Arkansas Justice & Public Safety PAC."

The Arkansas Justice & Public Safety PAC is an independent expenditure committee backed by $321,000 from Soros, according to a report filed Monday with the Arkansas secretary of state's office.

Walton faces Will Jones in the nonpartisan race to replace retiring prosecutor Larry Jegley. Walton and Jones are both from North Little Rock. The election is May 24, along with the state's party primary elections.

"It's disappointing to see that a group like this that has consistently funded defund-the-police prosecutors and soft-on-crime prosecutors is trying to bring those types of policies to Central Arkansas, especially in light of the rise in violent crime that we're currently dealing with," Jones said of Soros' support for his opponent.

The Arkansas Justice & Public Safety PAC spent $106,248 in April, mostly on consulting, polling and research -- none of it with an Arkansas entity.

Whitney Tymas of Washington, D.C., was listed as the PAC's officer. She is director of Black Women Forward Action Fund, according to the filing. Tymas couldn't be reached for comment Friday.

Walton said that if they were ads for her campaign, she's unaware of them.

"I have been so focused on my campaign, I haven't had time to listen to the radio," she said.

Walton said she would check into it and call a reporter back later Friday afternoon. She didn't call back, and voicemail messages left for her weren't returned.

In a video on her campaign's Facebook page, Walton talks about her reason for running.

"Over the course of my career, I have worked extensively within our criminal justice system, and I see a system that fails far too many," she says. "A system where laws are applied unequally, where defendants' rights are abridged, victims go unheard and far too often justice depends on how much money a defendant or victim has. Lady Justice is supposed to be blind. We should not allow this to continue."

According to the Arkansas secretary of state's website, the Committee to Elect Alicia Walton had received $19,074 in contributions and had $16,481 in expenditures.

The Republican Party of Arkansas sent out a mass email on Friday, saying: "Crime increases around the Nation where George Soros funded DAs and Prosecutors reign. Now as crime is on the rise in Little Rock, Soros turns his attention and cash to the Central Arkansas Prosecuting Attorney's Race, supporting soft on crime Alicia Walton.

"This highlights the importance of doing our research on these 'non-partisan' candidates in judicial and prosecuting attorney races and how they are funded. Do we as Arkansans want billionaires with Leftist agendas deciding who we elect in Arkansas?"

Soros has been somewhat of a bogeyman for the Republican Party.

"In cities where they have taken over, Soros prosecutors coddle even violent, career criminals, often with sweetheart deals," according to Cotton. "The only good Soros prosecutor is a defeated Soros prosecutor. These radicals have no business holding any public office anywhere in our nation."