IN THE GARDEN: Samples of ailing plant can help determine course of action regarding its siblings 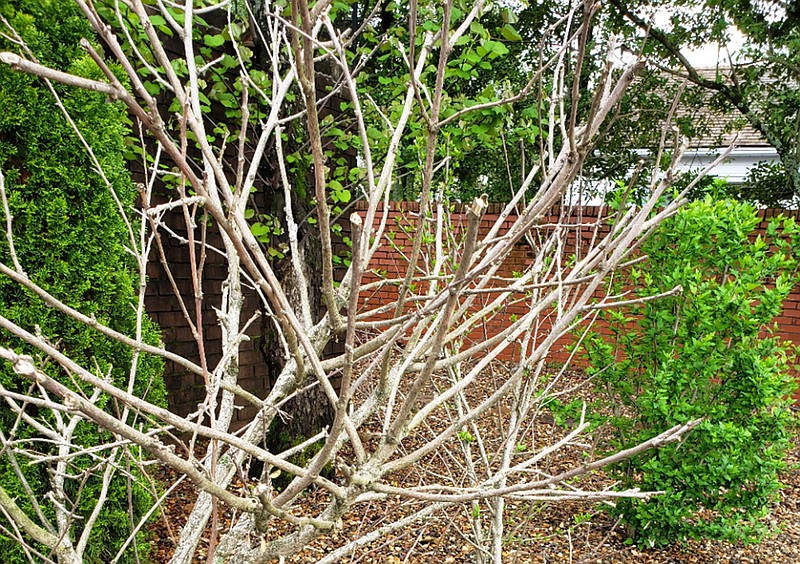 A plant pathologist can determine whether disease, pests or something about the site has harmed these rose of Sharon plants. (Special to the Democrat-Gazette)

Q: The attached pic shows the front of a garden covered with weed fabric and decorative rock. All three Althea, starting in the left foreground, were luscious till mid-late last summer, when the first two (left and middle) started looking bad: branches losing leaves and drying up. I watered and fertilized (sparingly) all three, to no visible effect. The left-most one, my pride and joy for years, has completely failed to come back this spring, and one of the two main trunks of the second one is also bare and dry, while its other trunk is leafing out (though not nearly as early nor vigorously as the one more distant on the right ... that one is trying to conquer the world). Unsure as to No. 1's demise, I scraped the bark, bent stems and branches for rigidity, looking hard for signs of viability. Just can't tell. I'm prepared to dig up and replace No. 1, but want to be sure it won't come back (especially since all three were treated the same, in virtually identical growing conditions). Advice?

A: Rose of Sharon or Althea is usually a tough plant. It can suffer from several root diseases, especially in poorly drained soils. Without seeing it in person, I can't say for certain, but I do not think it is going to survive. I talked with the University of Arkansas plant pathologist, and she would like a sample of the roots and some of the wood. If you are cutting it down, see if there is any brown streaking in the stems, especially near the base. If you can take the samples in to your local county extension office, she can test for disease and tell you what to do for the other plants, and whether you should replace them with something else.

Q: When I was younger, my mother and I would walk around the woods of Hall High campus in Little Rock. There was a wildflower — I am thinking a type of violet — that grew around the trees. They were purple with 5-6 petals. Randomly one petal on a flower would be dark, velvety purple. My mom would tell me that an angel had kissed that flower. Do you know what this flower would be?

A: What a sweet memory. I would guess the plant is a wild violet, Viola sororia. Depending on where it is growing it can be a wildflower or a weed. It is in full bloom now in many lawns and gardens, and while it is pretty, it can be highly invasive.

Q: This Japanese maple was damaged when the tree trimmers came through our neighborhood for Entergy a couple of years ago. They dropped a large branch on the tree, and it sliced all the branches off down one side. I've been watching for new growth on that side and there isn't any. Is there anything I can do to promote growth on the side without any branches? I am worried that as it matures it may be more susceptible to wind damage because it will be heavier on one side. The tree is finally getting some height, and I would hate to lose it.

Q: We are being invaded by woolly caterpillars all over Hot Springs. I'm assuming they come from those small white webs on the trees. Are they harmful and what are they?

A: Yes, they are associated with the white webs in the trees. They are Eastern tent caterpillars. Luckily, they are short lived. They can eat a lot while they are active, but they should be gone in about two weeks, and the trees will recover. Very young, small trees can be damaged, but most trees are not significantly harmed.