Little Rock port gets OK for buy at $2.2M 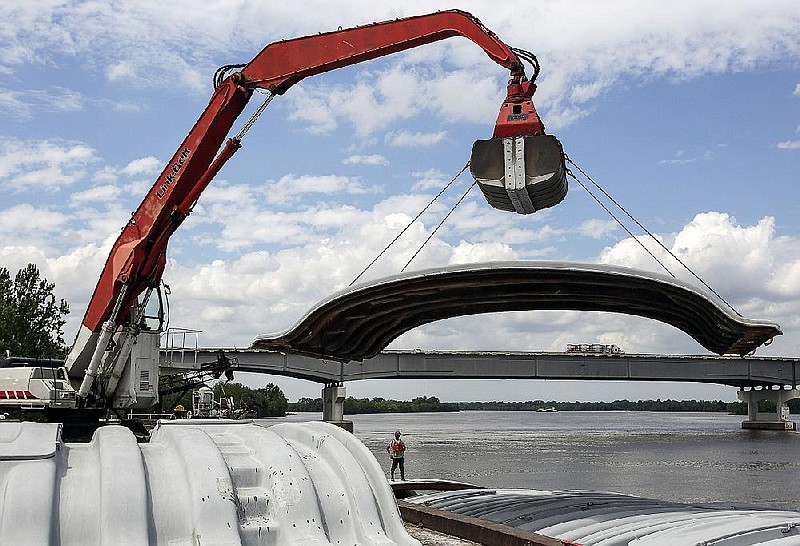 FILE — A crane lifts a cover into place for a barge at the Little Rock Port Authority in Little Rock in this April 20, 2017 file photo. (Arkansas Democrat-Gazette/staff photo)

The Port of Little Rock is acquiring a building within its property for $2.2 million so it can be converted into a multipurpose space for the port's tenants and surrounding community with its precise function still to be determined.

The Little Rock Port Authority's board of directors heard a presentation on the proposed purchase last week but Stan Hastings and other board members said they wanted more time to review the proposal.

The board was more receptive when the port's executive director, Bryan Day, revived the proposal at a special meeting Friday morning held via an online meeting platform.

"We want to purchase that building and work with the board and other members of the community to develop a port resource center," Day told the board members. "What that looks like today I don't know."

He cited a plethora of uses for the acquisition.

"I envision creating a revenue stream through people renting it," Day said. "It could be a police substation, it could be food service, it could be an employment office, it could be temporary office space for our industry partners, training space, health care.

"Again the first step would be to come together and program it, do some surveys with the port and the community to see what's needed."

A multipurpose space has been on the port's radar since development of its 2015 strategic plan, which included it as an action item. A 2020 update specifically focused on a multipurpose facility, cited a void in amenities at the port as well as industry trends as reasons to continue to pursue it.

The feasibility study cited the Maritime Education Center at the Port of Catoosa in Tulsa, which is described as a free exhibit facility featuring interactive video kiosks and the port's history and impact on the economy; Regional Commerce Center at Port of Caddo-Bossier in Shreveport, a 34,000-square-foot facility that cost $14 million; and the workforce training center at the Fairfield County Port Authority in Ohio.

The Little Rock port's proposed facility was initially envisioned as a new building that would be constructed near the port's main office, but Day said at last week's meeting that construction costs made that option unfeasible.

It doesn't hurt that Delta Dental is willing to help finance the deal with a five-year, interest-free loan.

Day has said it would cost about $100,000 annually to maintain the building and provide utilities and wouldn't rule out hiring an additional employee to manage the building.

The building has been on the market just shy of three years with no listed price. The two-story structure contains 40,000 square feet and sits on almost 5 acres at 7773 Sloan Drive. It is about 2.5 miles from the port's main office at 10600 Industrial Harbor Drive.

The building was built in 1994 and used as headquarters for Georg Fischer Ltd., a Swiss manufacturer with a facility at the port. Delta Dental acquired the property in 2008 for $1.8 million and spent several million dollars modernizing it.

The motion Hastings made to approve a resolution authorizing Day to enter into the contract received no opposition. Board member Tamika Edwards said her participation on the Delta Dental board constituted a conflict and left her unable to participate in the discussion of the purchase or vote on the resolution.

The sale agreement still must be approved by the Little Rock Board of Directors before it can be executed.

Print Headline: LR port gets OK for buy at $2.2M