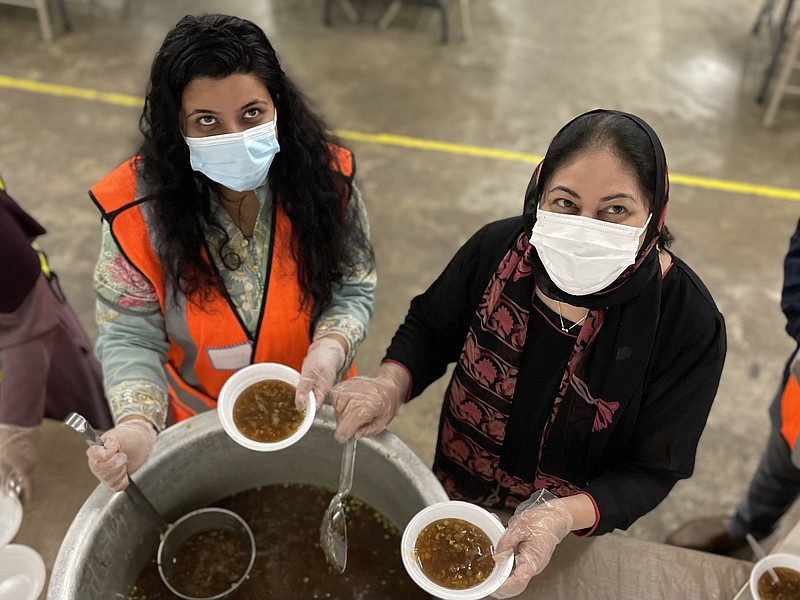 Shashataw Hoque Logno (left) and Summaiya Kamran dish up hot-and-sour soup Monday evening to serve to guests at Madina Institute and Mosque in Little Rock. During Ramadan, many Muslims have been gathering there in the evenings to break the fast. More photos at arkansasonline.com/430mosque. (Arkansas Democrat-Gazette/Frank E. Lockwood)

Sophia Said is the first and only woman to found and chair a mosque in Arkansas.

Night after night during Ramadan, which began April 1, she is present, not only to pray and hear Quran recitations at the Madina Institute and Mosque in Little Rock, but also to welcome guests and to ensure that everyone is well-fed.

Others track sunrise and sunset, so that prayers are said and fasts are broken at precisely the right moment.

Said shepherds interfaith visitors around the center and makes introductions, seemingly knowing the name, home country and occupation of every person who gathers in the 17,000-square-foot facility on Kanis Road.

For faithful Muslims, hospitality isn't merely good manners; it is seen as a core value.

"He who believes in Allah and the Last Day should treat his neighbor with kindness and ... show hospitality to his guest," the Prophet Muhammad is said to have counseled.

Said (pronounced Saw-eed) is a native of Pakistan and serves as executive director of the Interfaith Center.

Said and her husband moved to Arkansas in 2007 so her husband could take a job at the University of Arkansas for Medical Sciences.

Initially, the family worshipped at the Islamic Center of Little Rock, a stone's throw from the University of Arkansas at Little Rock.

Eventually, she saw the need for a mosque farther west.

"I started working on this project back in 2014. It took two or three years, but we opened this in 2016. It was a long, arduous journey [for] me and my steering committee of seven people," she said.

After scouting for a good location, they found a building a short distance from Sam's Club and Lowe's.

"This book warehouse came on sale and we purchased it, and then we slowly started converting it into a house of worship," she said. "We made a parking lot, we made the wash rooms, we made the prayer room, we did the landscaping but we have to finish a lot of it in order for it to look like a mosque."

"My dream would be to have a dome and a minaret," she said. "I don't know if we can do that or not because we haven't started on that journey yet with the city and the designs and the architect."

For now, the focus is on finishing the dining room and the gym, she said.

According to its website, the Madina Institute "promotes a spiritual and inclusive understanding of Islam that is based on peace, tolerance, acceptance, interfaith engagement, and gender equality."

"In an age when Muslim communities are divided by ethnic, sectarian, and ideological factionalism, Madina Institute hopes to revive the values of love, compassion, and unity that rest at the core of our beloved religion," it states.

Its leaders seek to maintain "a commitment to the Quran and the Prophetic way while encouraging open dialogue, mature discussion, and free thinking."

The mosque's imam, Mohammed Nawaz, holds a degree in Islamic Studies from Jamia Nizamia in India.

When he's not reciting the Quran in Arabic or offering spiritual exhortations in English, he walks from table to table in the dining room, welcoming guests, greeting regulars, smiling warmly as he makes the rounds.

On a recent evening, he encouraged listeners to lead lives of holiness and to draw closer to Allah.

Abstaining from food alone is insufficient, he said afterward.

Ramadan is meant to be observed in community. Over the past two years, covid-19 has complicated matters for the imam and those he serves.

Due to the pandemic, only a handful of Muslims were able to worship at the mosque during Ramadan in 2020; at least four people must be present for Friday prayers.

Last year, the restrictions were eased somewhat, though masks were mandatory and communal meals were not allowed.

This year, with covid numbers down sharply, the building is bustling again during Ramadan.

Since there are no membership rolls, it's hard to determine how many people have adopted the mosque as their own.

Anyone is welcome, Said said, and Ramadan meals have been free, with generous benefactors underwriting them.

On Monday, worshippers broke fast in the traditional fashion -- by eating plump, delicious dates. After enjoying hot and sour soup and mango juice, worshippers removed their shoes and headed into the prayer room, with men in the front and women in the back.

After bowing toward Mecca, praying and praising Allah, they headed back into the dining room. Thanks to the benevolence of Dr. Ahmad Yousaf and Dr. Omar Qazi, there was more than enough Chinese-Indian fusion food from Taj Mahal to feed the multitudes, followed by cheesecake and mango ice cream.

During Ramadan, mosque attendance has varied, with as many as 350 people showing up to break the fast.

A large crowd is expected on Monday for Eid al-Fitr, the holiday marking the end of Ramadan.

After a month of fasting and prayer, the gathering is supposed to be joyous. Fasting, in fact, is forbidden.

Islam is a global religion and the west Little Rock mosque reflects that. On a recent evening, immigrants from India, Iraq and Niger mingled with others from Afghanistan, Pakistan, Arkansas and Alabama.

Dr. Sara Tariq, one of the organization's co-founders and a member of its board, said the mosque opens its doors to all.

"I believe in radical inclusion and I wanted to help create a mosque that reflected that," she said. "I wanted to have an American cultural flavor to my faith because I'm American."

Jay McDaniel, a professor emeritus of religion at Hendrix College, has taught a world religions class at the Madina Institute and admires what the mosque and its leaders have accomplished.

As founder, Said deserves a great deal of credit for the strides the mosque has made, McDaniel said.

"You don't want to say that Sophia is solely responsible for that; she's not," he said. "But she is an excellent administrator, and she is really figuring out how to pull teams together and do great things." 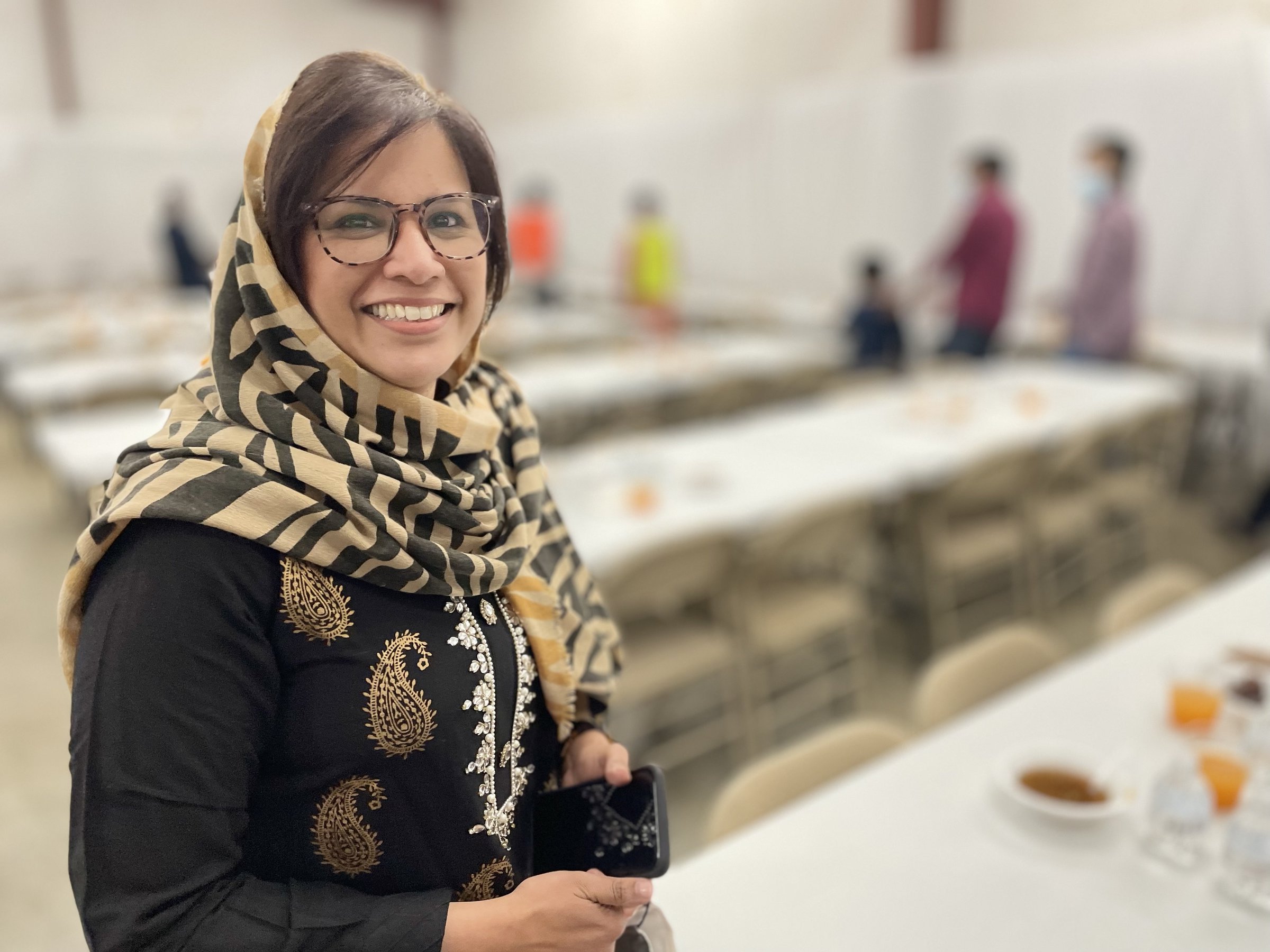 Dr. Sara Tariq was an early supporter of Little Rock’s Madina Institute and Mosque. “I believe in radical inclusion and I wanted to help create a mosque that reflected that,” she said. (Arkansas Democrat-Gazette/Frank E. Lockwood) 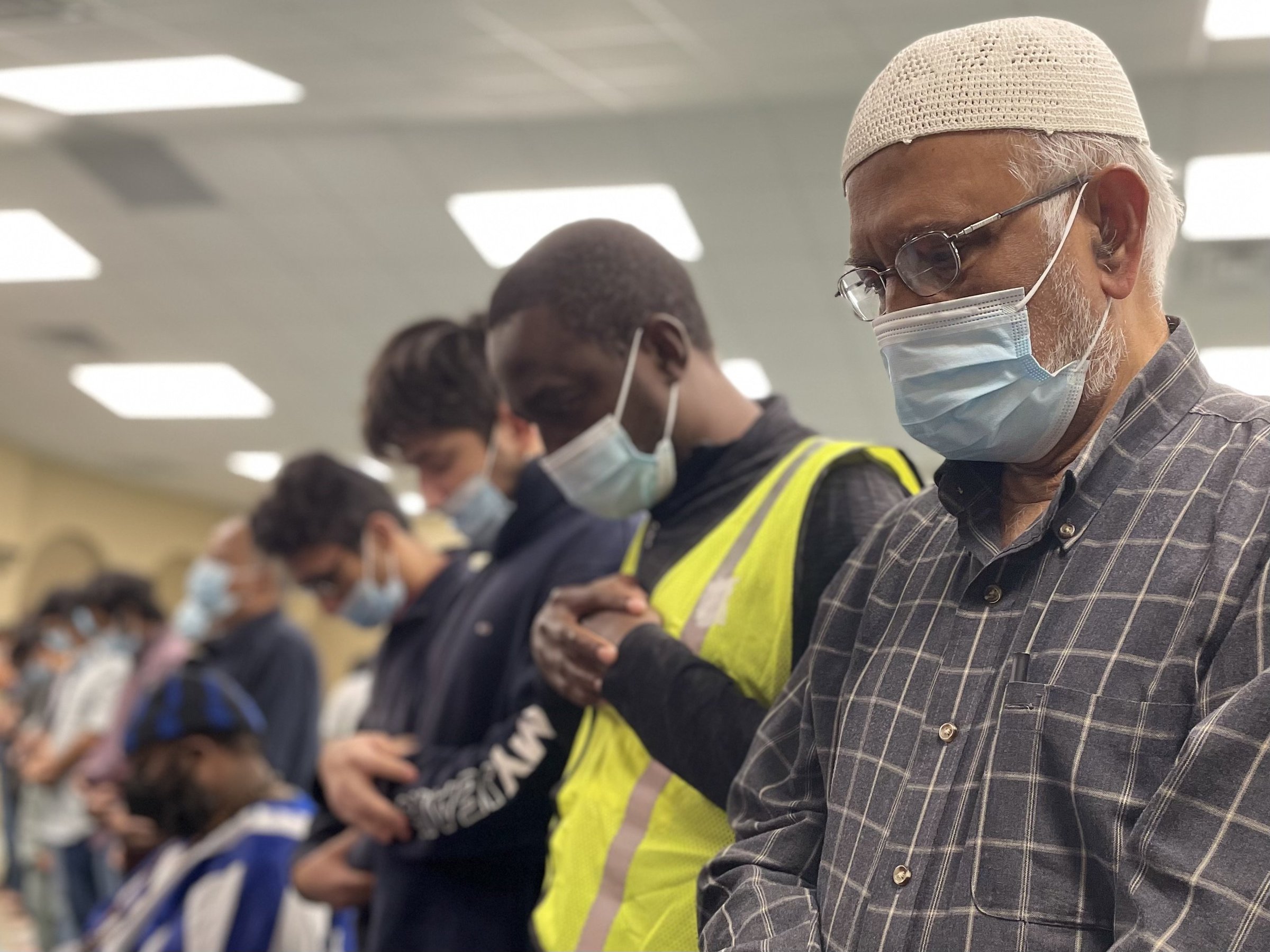 Hashim Ghori (right) prays with other Muslims on Monday at the Madina Institute and Mosque in Little Rock. At a mosque, men of all races stand shoulder-to-shoulder to acknowledge Allah, he said. (Arkansas Democrat-Gazette/Frank E. Lockwood) 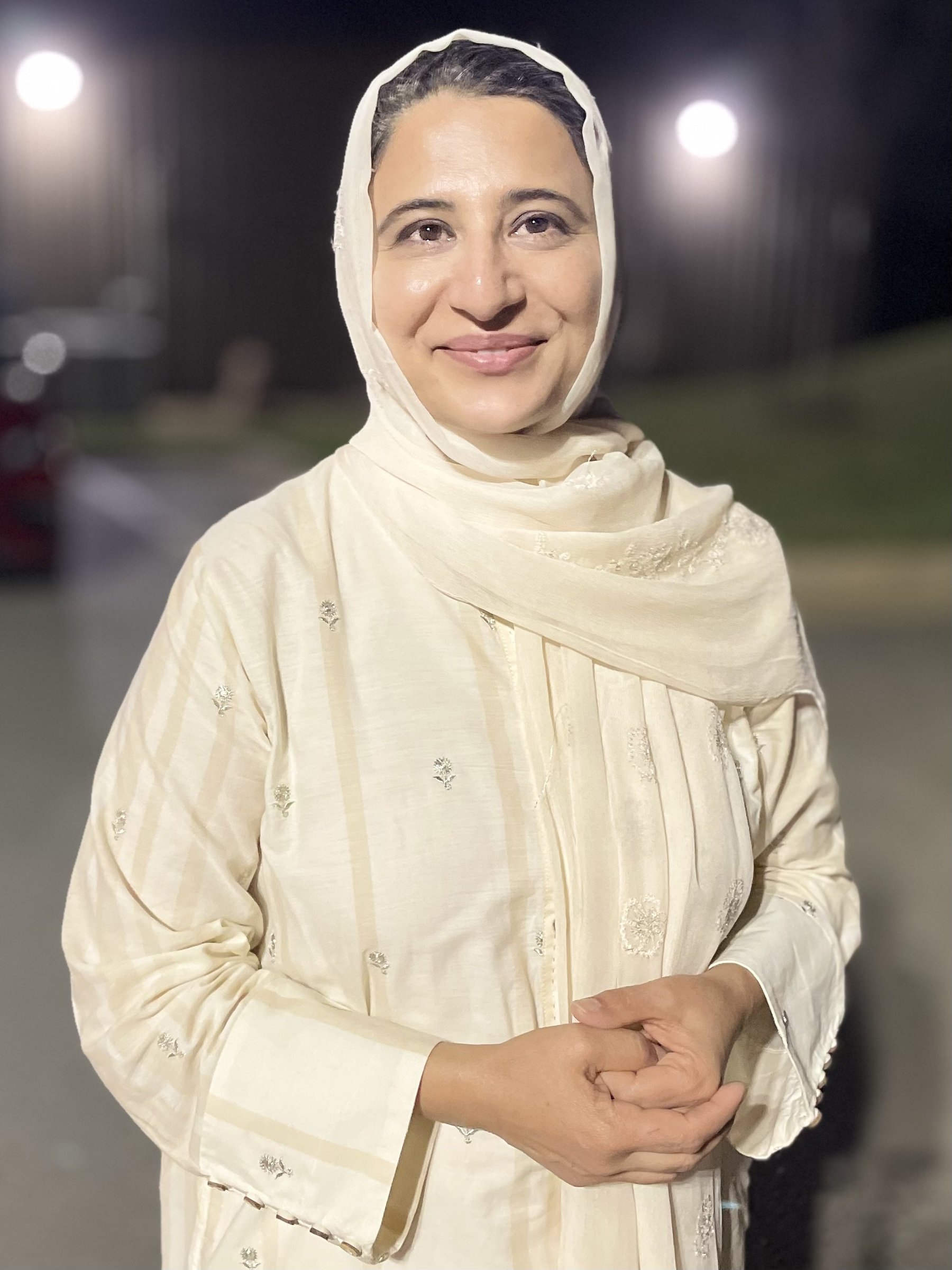 Sophia Said stands outside the entrance to the Madina Institute and Mosque following the breaking of the Ramadan fast on April 23. Said founded the mosque in 2016 and currently serves as its chairwoman. (Arkansas Democrat-Gazette/Frank E. Lockwood) 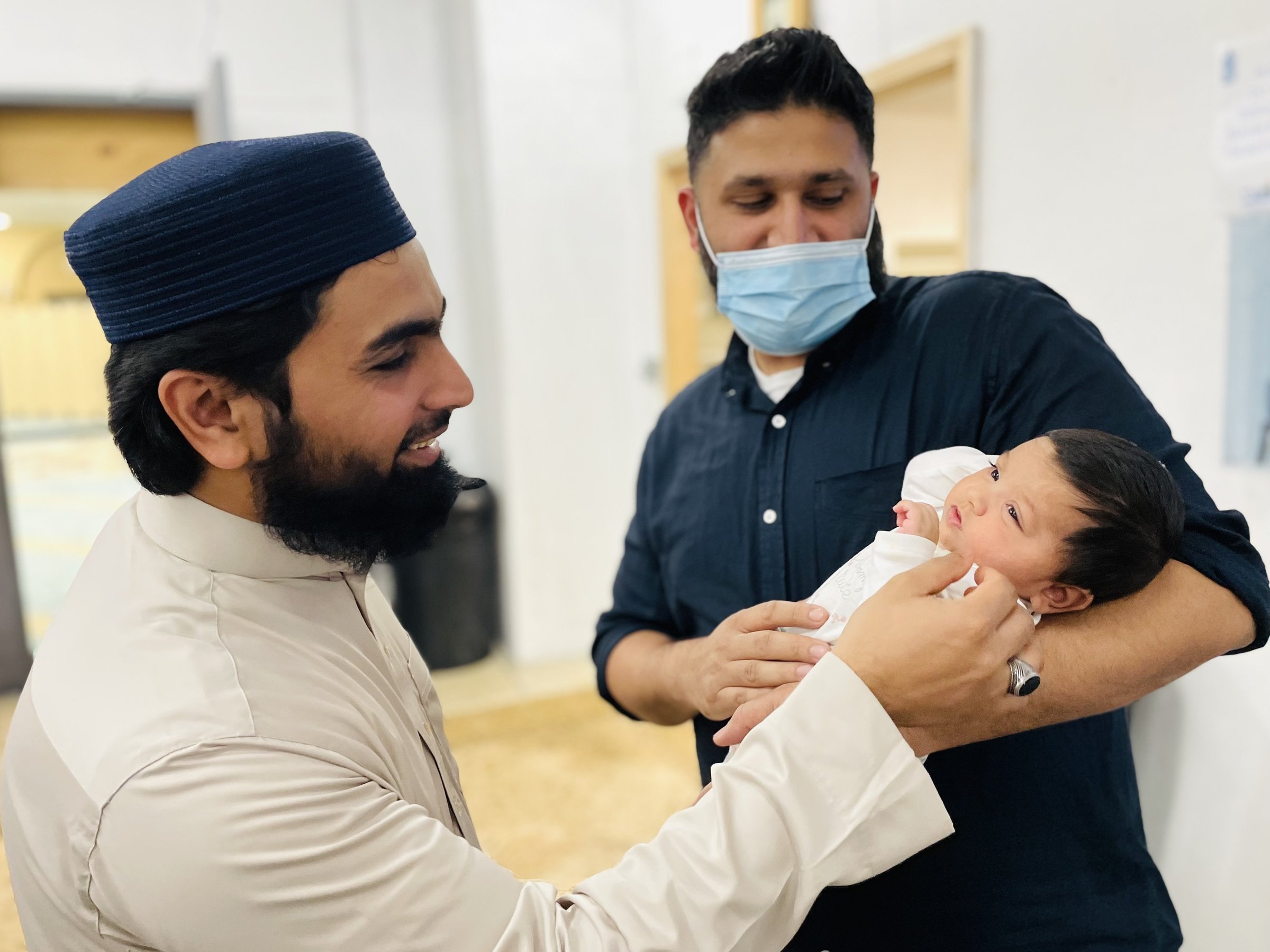