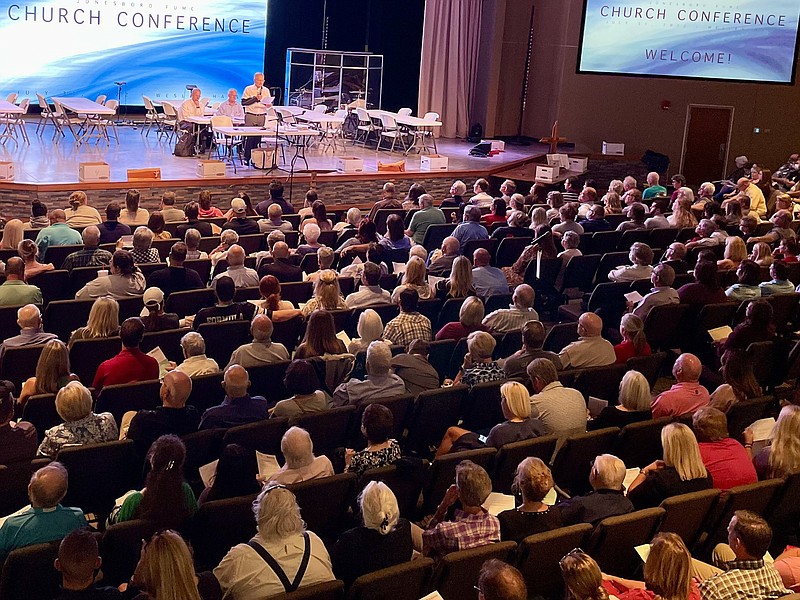 More than 1,350 members of First United Methodist Church in Jonesboro packed Wesley Hall Sunday, July 31, 2022, and heard arguments for and against severing ties with the denomination. Once debate ended, the congregation voted 944 to 412 to disaffiliate. (Arkansas Democrat-Gazette/Frank Lockwood)

The vote was 944 to 412, more than the two-thirds supermajority necessary for passage.

A total of 1,356 cast votes during Sunday's church conference at Jonesboro First United Methodist Church, all but seven of the 1,363 professing members and clergy who were on hand.

Of those members present in Wesley Hall, 69.26% voted for disaffiliation. In order to pass, the motion needed to receive 909 votes.

Bishop Gary Mueller, who oversees the denomination's Arkansas Conference, traveled to Jonesboro for Sunday's proceedings, presiding over the meeting and announcing the result at 8 p.m., three hours after the announced starting time.

By the time the results were announced, most of the members had gone home.

Before announcing the results, Mueller asked the audience to refrain from reacting to the outcome.

"I know some will be happy and some will be very sad, but remember your brother and sister who was on the other side of the vote and remember that we care for their feelings," he said.

When the results were announced, the audience was utterly silent.

Mueller, who has said he wants Arkansas' congregations to end up where they believe God wants them to be, had promised to work with churches that disaffiliate while also protecting the United Methodist Church's legitimate interests.

"For those of you who voted to remain United Methodist, we will be walking with you and supporting you. We're going to start collecting names and working with you in the coming weeks. We'll be exploring options and possibilities for you including and up to the beginning of a new United Methodist Church if this is ratified by the annual conference," he said.

Before closing in prayer, Mueller outlined the next steps that must occur.

Church trustees will need to complete a standard disaffiliation agreement. Among other things, it will require the Jonesboro congregation to submit unpaid tithes, if any, to the Arkansas Conference, plus an additional tithe -- or 10% -- of contributions the church has received to cover its annual spending plan or budget in a preceding 12-month period.

The agreement must also be ratified by a majority during a special session of the Arkansas Annual Conference, scheduled for either Nov. 21 or March 13.

People were encouraged to show up early for the 5 p.m. meeting and, by 3:45 p.m., the hallways were already crowded.

Only professing members and clergy were eligible to vote.

Under church law as contained in Book of Discipline of the United Methodist Church (paragraph 2501), properties owned by local churches have traditionally been "held, in trust, for the benefit of the entire denomination."

In 2019, however, delegates to a specially-called General Conference in St. Louis added paragraph 2553, allowing for the "disaffiliation of a local church over issues related to human sexuality."

Under the provision, it takes a supermajority -- two-thirds of those members present -- to authorize a church's leadership to complete the disaffiliation process.

The Jonesboro resolution stated that the congregation was voting to disaffiliate "for reasons of conscience around issues of human sexuality," largely mirroring the language in the Book of Discipline.

While utilizing a provision based on sexuality, congregational leaders said their concerns were broader.

There are roughly 615 United Methodist congregations statewide, with total membership of 113,159. Approximately four dozen of those congregations have entered the disaffiliation process, Arkansas Conference officials had previously stated.

With average Sunday attendance of 1,577, Jonesboro First has been listed as one of the country's 100 largest United Methodist churches.

Unlike other major mainline denominations, it has not embraced the gay rights movement, opting to retain long-standing restrictions on marriage and ministry.

The church's Book of Discipline, which contains its laws and doctrines, states that "the practice of homosexuality is incompatible with Christian teaching."

Therefore "self-avowed practicing homosexuals" are not supposed to be ordained as ministers or appointed to serve.

After the vote, the congregation's pastor, John Miles, said that both sides had "wonderful people," but portrayed the United Methodist Church's divisions as deep.

"This is a national trend. Almost all the mainline churches have already split. We're the last one," he said.

Nationally, there are disagreements about the church's primary focus, he said.

Opponents of disaffiliation said it was unnecessary, arguing that the Arkansas Conference has never strayed from the Book of Discipline and continues to uphold Methodist laws and doctrines.

“There was a lot of things said about things that are not really happening in Arkansas,” stated Bill Bristow, a longtime member who had presented the summary presentation against disaffiliation prior to the vote.

In a post on Facebook Sunday evening, Stay UMC Jonesboro, which had organized opposition to disaffiliation, said it was "disheartened and saddened that anyone would want to leave the UMC" and thanked its supporters for sharing their "time, talents, gifts, and service."

Miles, said supporters of disaffiliaton would "try to be gracious and mend as many fences as we can," but indicated he believed his congregation had made the right decision.

"This allows us to move forward," he said.