OPINION | GAME ON: Meow, nap or leap for your life as lost tabby cat in brief, engaging ‘Stray’ 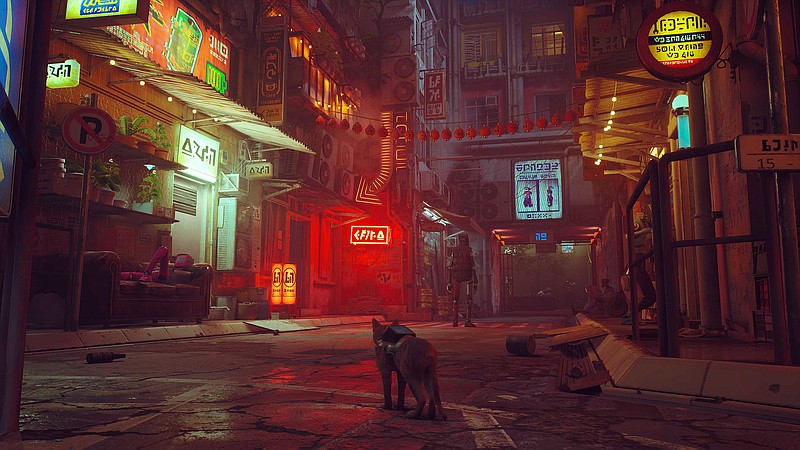 "Stray," a cyberpunk puzzle-platform, isn't the first game to have a nonhuman protagonist, but making your character a nameless cat might be a first.

And it's just a normal cat, one that likes to do standard cat things, like hang out with its stray cat friends while exploring nature, which is how the game starts.

But then tragedy strikes, as our orange tabby hero falls into a deep, deep hole, eventually landing inside an urban landscape known as the Dead City. Your mission? Find a way to escape the city and return to your friends in the outside world.

The Dead City is inspired by the real-life Kowloon Walled City, providing our unnamed stray with a neon-lit, dense, extremely vertical urban jungle to explore and traverse by leaping from trash cans to vending machines to pipes to apartment ledges to air conditioners as only a cat can.

"Stray" fully embraces the peculiarities of being a cat. Taking naps, scratching at doors and walls, meowing and knocking objects off ledges (among a cat's favorite hobbies, to be sure) are possible throughout the game, and don't always have game-play ramifications, although sometimes they do. Sometimes, knocking over a stack of books reveals a secret, or pawing at a curtain reveals a new path forward.

My favorite example of this capturing of cat behavior comes early on, when our stray finds a companion — a small, hovering robot named B-12 that puts a backpack on our feline protagonist. If you've ever put a harness on a cat in real life, the stray does exactly what you'd expect — flop over on its side, slide around on the floor and act extremely aggrieved.

The city is devoid of life -- sort of. Plenty of greenery exists as nature works to reclaim the city, but there are no humans and haven't been for a long time. However, the humans' robot caretakers have survived, and have created something of a society for themselves. They have their own language, and upon a first meeting, implore our feline friend to refrain from eating them.

Who doesn't love robots with personality?

The goal for our stray is simple — to reunite with his family, to return to what the robots refer to as "The Outside." However, they say it's an impossible task that many have tried and failed.

There's another type of inhabitant in this world, and it's not friendly. They're called Zurks, and they look a bit like a cross between hairless guinea pigs and facehuggers from "Alien." They swarm in huge numbers. The cat is faster and can shake them off, but if he takes too much damage it's game over, and time to reload from the last checkpoint.

The game is visually striking, perhaps beautiful in that "naturalia" sense of seeing nature overtake civilization. French studio BlueTwelve created a wonderfully realized and engaging game that, although fairly short, provides an emotional, satisfying experience. (Expect to spend four to six hours to complete the game, or more, depending on how much you like to look around, explore and find collectibles.)

All in all, it's a good game, and while there are action parts when Zurks are on the hunt, it can be very peaceful to explore; but it's on the expensive side for a game that only takes a few hours to complete and has limited replay value.

[Video not showing up above? Click here to watch » arkansasonline.com/81stray/]

"Rock Life: Rock Simulator" is one of those ridiculous games that tells me the simulator zeitgeist is perhaps going too far and trying too hard.

Have you ever wanted to be a rock?

Well, maybe, if you've seen the wonderful movie "Everything Everywhere All at Once."

"Rock Life" has you in a field, listening to mellow ambient music, living your best rock life, doing what rocks do -- which is nothing. You can change what kind of rock you are (would you like to be more jagged? Or small and rotund?) and can change whether you're in a meadow or a zen garden, and ... that's it. That's the game.

Its saving grace is that it's free and perhaps just made as an experiment, but in a world where simulators exist for planes, trains, trucking, power washing, car mechanics, farming, railroads, building personal computers, cooking and even broadcast TV, it seems like everything is being turned into a sim lately, and most of them are pretty bad.

My advice? If you want to stare at a rock, go outside. The graphics are way better.

Print Headline: Be a ‘Stray’ kitty in a scary city