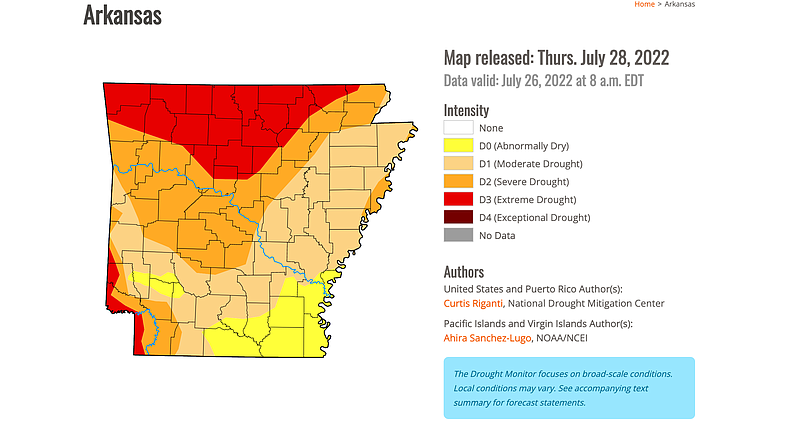 This screengrab shows the most recent Drought Monitor for Arkansas, released on Thursday, July 28, 2022. The Arkansas Secretary of Agriculture, Wes Ward, said the map is updated every Thursday.

The U.S. Secretary of Agriculture, Thomas Vilsack, has increased the number of Arkansas counties that are designated as primary natural disaster areas.

Gov. Asa Hutchinson announced in a tweet on Tuesday that Vilsack had responded to his request for more drought assistance in Arkansas.

Hutchinson wrote in the tweet, “An additional 20 counties have been designated as primary natural disaster areas, providing for financial relief for our farmers.”

The letter Hutchinson posted on Twitter from Vilsack states that the designations mean farmers in those areas can contact the Farm Service Agency and apply for assistance, including emergency loans.

“As of today, we have not received any applications for emergency loans regarding this declaration.  Producers should check with their local FSA Office and inquire as which programs are available to them,” wrote Washington.

The Arkansas Secretary of Agriculture, Wes Ward, said Tuesday that “What that does for Arkansas is open up emergency loans. If nothing else, it would give some producers some backstop if they have to make additionally purchases or expenses.”

Farmers have eight months from the date of the designation to apply for emergency loans, Vilsack wrote.

However, Ward said farmers may not want emergency loans due to having to pay them back.

That program can help provide assistance to farmers who have started having to feed livestock hay early due to the grass not growing. Ward said that farmers do not have to pay back assistance provided for that disaster program.

James Mitchell, an extension livestock economist with the U of A System Division of Agriculture, said he was skeptical about how much these loans help.

“It’s not ‘free’ money, it’s a loan. That means farmers will have to meet requirements and pay back that loan,” said Mitchell.

“I would say this is the most expensive hay crop we’ve ever had. With overall inflation affecting the costs of fuel, pesticide and fertilizer, there are concerns with farmers having to feed cattle with hay and draw down from their supply to early,” said Mitchell.

Ward said, “Currently 27 counties that have hit D3 status. North central Arkansas and southwest were the areas most hit. But still, the entire state is under drought conditions.”

The secretary said he does not think the drought conditions will change soon, though the rain might shift the level of severity for a bit.

“We’re going to be in significant drought conditions because of the rain until October. The National Weather Service is forecasting hot and dry conditions. There was a little relief but we are going to be back to tough situation,” said Ward.