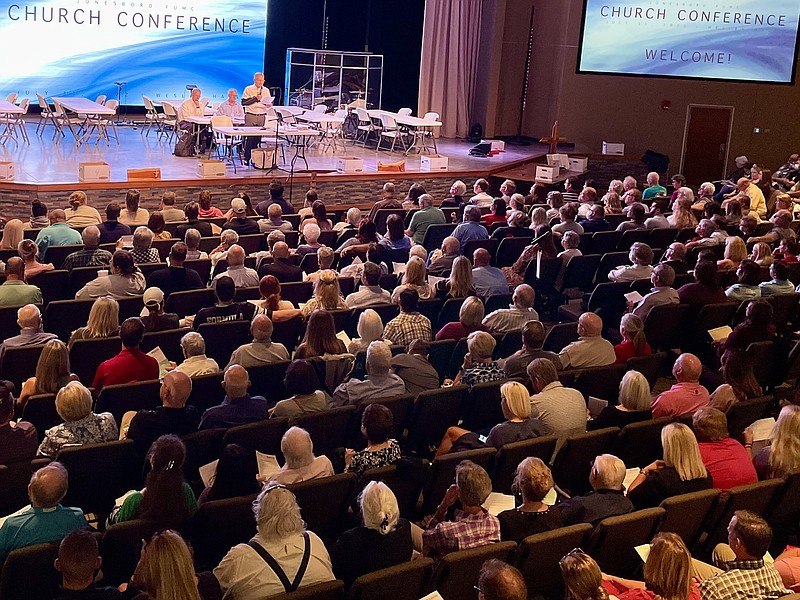 More than 1,350 members of First United Methodist Church in Jonesboro packed Wesley Hall Sunday, July 31, 2022, and heard arguments for and against severing ties with the denomination. Once debate ended, the congregation voted 944 to 412 to disaffiliate.

The United Methodist Church in the United States is increasingly polarized and people on the extreme ends of the spectrum are moving away from long-held Christian beliefs, Bishop Gary Mueller warned Monday.

Mueller made his statement one day after Jonesboro First United Methodist Church voted to disaffiliate from the denomination, with some members arguing that the national body can no longer be counted on to uphold the faith's historic teachings.

Unitarians generally do not believe in the divinity of Christ and reject the concept of biblical inerrancy, viewing the Bible as historically unreliable.

In an interview, Mueller did not identify any Methodist conferences or congregations where traditional biblical teachings have been abandoned, but said the Arkansas Conference, which he oversees, does not have congregations in either camp.

"I think in Arkansas, you have this broad middle that I'm now calling the heart of United Methodism, and it's made up of folks who are centrist and moderate," he said.

"The centrists [are] kind of a little on the left, the moderates on the right, who share orthodox, traditional theological beliefs and are deeply connected in the body of Christ and to our history and to our common mission," Mueller said. "I think in Arkansas, the biggest majority of the church would fall that in that broad middle, the heart of United Methodism."

There are roughly 615 United Methodist congregations in Arkansas, with total membership of 113,159.

Jonesboro was the first of those to vote in favor of disaffiliation.

With average Sunday attendance of 1,577, Jonesboro First is one of the country's 100 largest United Methodist churches and the second largest in Arkansas.

Its members voted 944 to 412 Sunday to leave the denomination, "for reasons of conscience" related to "issues of human sexuality," the only grounds that trigger the disaffiliation process, under paragraph 2553 of the Book of Discipline.

But the differences between the Arkansas congregation and the wider Methodist church are broader and deeper than any one hot-button issue, supporters of disaffiliation stated repeatedly when the proposal was debated.

The Book of Discipline, which contains the official laws and doctrines of the church, is being flouted and bedrock Christian teachings are being abandoned, disaffiliation advocates say.

"There are seminaries, bishops, pastors inside the United Methodist Church ... at this moment, speaking against the truth that Jesus was born of a virgin, that he died, that he rose again, and that he is our Messiah," Alyson Meadors told roughly 1,350 people who had gathered for Sunday's vote.

Ty Keller, who also supported disaffiliation, argued that the problem isn't the denomination's doctrines but some of its leaders.

"I believe that 95% of us here believe in the Apostles' Creed, the Virgin Birth, the actual bodily death of Christ and the bodily resurrection of Christ, but there are examples in the UMC leadership of people teaching in direct opposition to that and not being punished for doing so."

Opponents of disaffiliation say the creeds have not been altered and church teachings remain grounded in scripture, portraying the case for separation as specious.

"You have outliers in every organization," Holly Hall of Stay UMC Jonesboro told the audience.

"If you need proof that the UMC believes in the divinity and a resurrection of Christ, look at all of the churches that celebrated Easter and Christmas this last year. The affirmation of faith is recited every Sunday, while a 2019 independent study of the official UMC seminaries found they are dedicated to making disciples of Jesus Christ," she said.

Deana Weeks, who spoke against disaffiliation, emphasized her own belief in the Bible, telling the congregation: "I also stand on God's word."

But the disaffiliation process, she argued, had been harmful.

"Disaffiliation means 'to split' and this process has certainly been divisive. It has damaged friendships, divided Sunday school classes and Bible study groups, [and] even caused difficulty within families," she said.

At the start of Sunday's meeting, Mueller urged people on both sides to remember what they have in common.

Following Sunday's disaffiliation vote, the congregation will need to complete a standard disaffiliation agreement with the Arkansas Conference's board of trustees.

Among other things, it will require the Jonesboro congregation to submit unpaid tithes, if any, to the Arkansas Conference, plus an additional tithe -- or 10% -- of contributions the church has received to cover its annual spending plan or budget in a preceding 12-month period.

In addition, the congregation will need to pay $399,531 to cover its pro rata share of legacy pension liabilities.

The agreement must also be ratified by a majority during a special session of the Arkansas Annual Conference, scheduled for either Nov. 21 or March 13.

Members of Stay UMC Jonesboro, a group opposing disaffiliation, haven't ruled out challenging the decision when the special session is held.