Griner trial to resume amid diplomacy

Biden administration under pressure to gain WNBA star’s release from Russia by JIM HEINTZ and ERIC TUCKER The Associated Press | August 2, 2022 at 2:00 a.m. 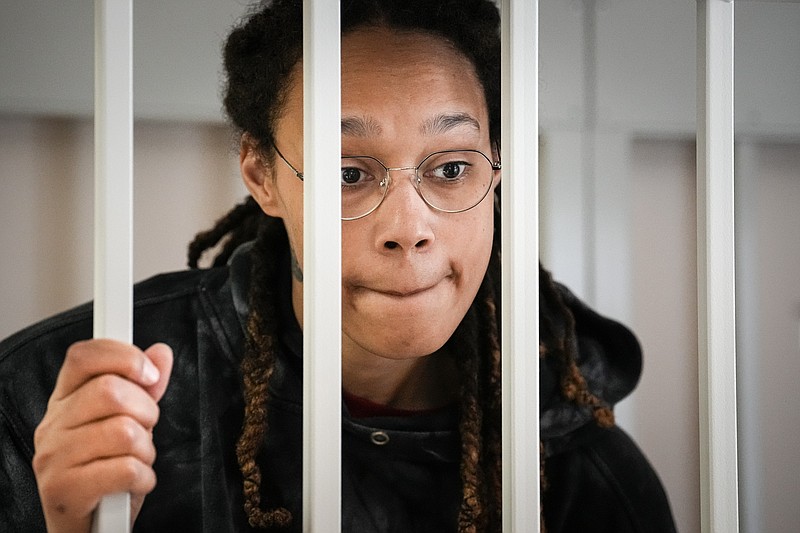 WNBA star and two-time Olympic gold medalist Brittney Griner speaks to her lawyers standing in a cage at a court room prior to a hearing, in Khimki just outside Moscow, Russia, Tuesday, July 26, 2022. American basketball star Brittney Griner returns Tuesday to a Russian courtroom for her drawn-out trial on drug charges that could bring her 10 years in prison of convicted. (AP Photo/Alexander Zemlianichenko, Pool)

MOSCOW -- Since Brittney Griner last appeared in her trial for cannabis possession, the question of her fate has expanded from a tiny, cramped courtroom on Moscow's outskirts to the highest level of Russia-U.S. diplomacy.

The WNBA star and two-time Olympic gold medalist returns to court today, a month after the beginning of the trial in which she could face 10 years in prison if convicted. As the trial has progressed, the Biden administration has faced rising calls for action to win her release.

In an extraordinary move, Secretary of State Antony Blinken last week spoke to his Russian counterpart Sergey Lavrov, urging him to accept a deal under which Griner and Paul Whelan, an American imprisoned in Russia on an espionage conviction, would go free.

Although details of the offer remain shrouded, Blinken's public announcement of a proposal was at odds with the convention of keeping prisoner-release negotiations tightly under wraps. When American Trevor Reed, serving time for assaulting a police officer, was freed in April in exchange for a Russian drug trafficker, no clues of an imminent swap had emerged.

The Lavrov-Blinken call also was the highest-level known contact between Washington and Moscow since Russia sent troops into Ukraine more than five months ago. The direct outreach risks undermining a core message to U.S. allies that isolating Russia could force the eventual withdrawal of troops from Ukraine.

It also underlines the public pressure that the White House has faced to get Griner released, which has brought some backlash. Former President Donald Trump strongly criticized the proposal that people familiar with it have said envisions trading Griner and Whelan for the notorious arms trader Viktor Bout.

"He's absolutely one of the worst in the world, and he's going to be given his freedom because a potentially spoiled person goes into Russia loaded up with drugs," Trump said.

White House press secretary Karine Jean-Pierre told reporters Monday that Russia has made a "bad-faith" response to the U.S. government's offer, a counteroffer that American officials don't regard as serious. She declined to elaborate.

Griner, speaking from the defendant's cage in a courtroom that barely holds a dozen people, has acknowledged that there were vape canisters containing cannabis oil in her luggage when she was arrested at a Moscow airport in February. But she says she had no criminal intent and that the canisters ended up in her luggage because she was packing hastily. Griner played for a Russian women's basketball team in the WNBA off-season.

To bolster her case, her defense lawyers have called character witnesses from her Russian team, UMMC Ekaterinburg, and presented testimony from doctors that Griner was prescribed cannabis as a treatment for pain. Medical marijuana treatment is not legal in Russia.

Her lawyers say they hope such testimony will bring leniency from the judge, who they say under Russian law has leeway to consider mitigating factors.

Acquittals are rare in Russian criminal prosecutions -- less than 1% of cases. Sentences can be suspended.

If a conviction is a foregone conclusion, it would also potentially be a step forward. Russian officials have said no release of Griner could occur until the judicial process is completed.

However, a Washington attorney who formerly was legal adviser at the U.S. Embassy in Moscow said there is no formal requirement for a conviction before an exchange.

He also said that, given the Biden administration's public commitment to securing the release of Whelan and Griner, Russia "may want to let this play out a little bit longer and try to extract more concessions."

Russian officials have given no public hint of whether Blinken made headway in his call with Lavrov, only issuing a statement urging the Americans to pursue the matter through "quiet diplomacy without releases of speculative information."

Russia has repeatedly expressed annoyance with American statements on the case, saying they show a disrespect for Russian law. 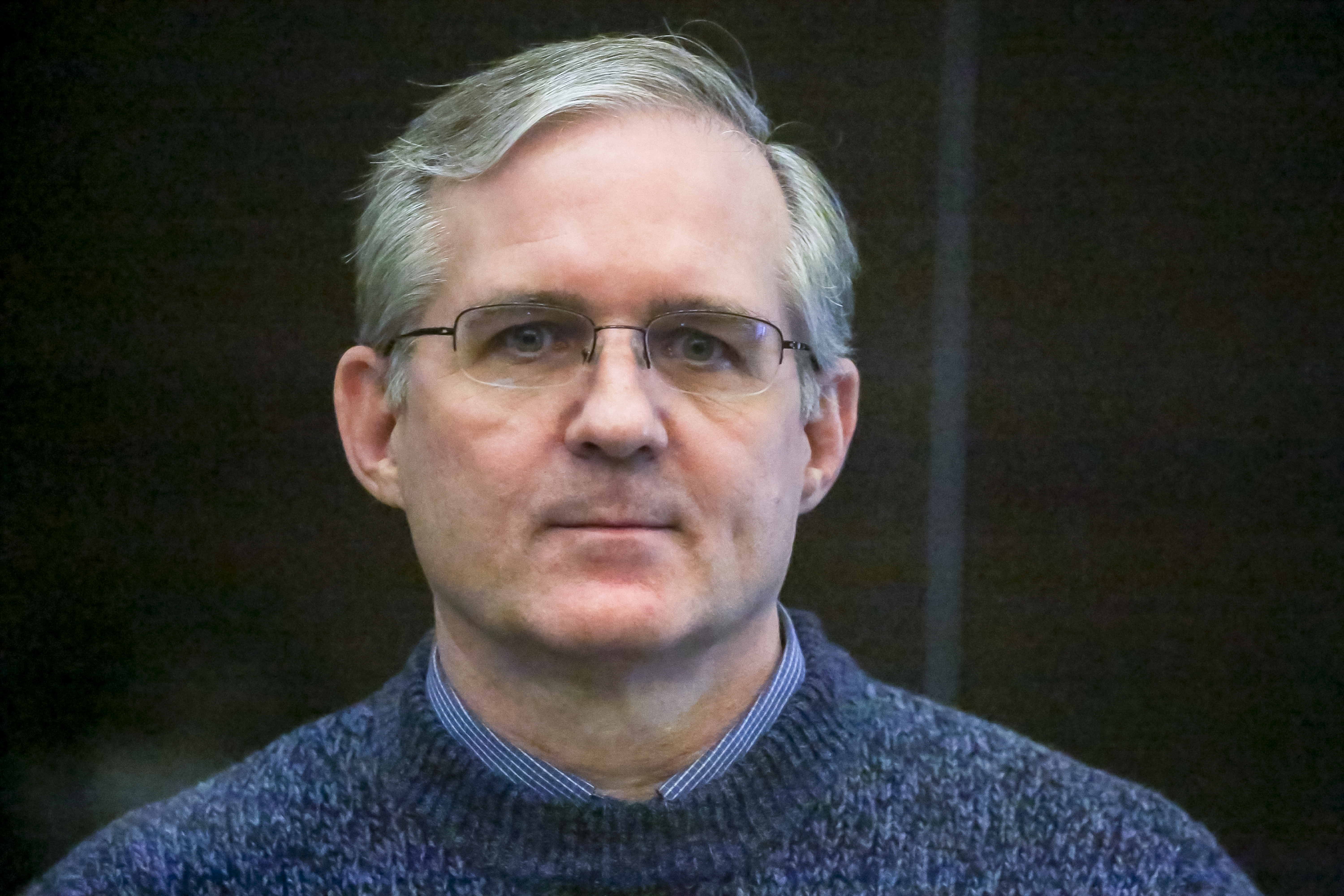 FILE - Paul Whelan, a former U.S. marine who was arrested for alleged spying, listens to the verdict in a courtroom at the Moscow City Court in Moscow, Russia, June 15, 2020. The Biden administration has offered a deal to Russia aimed at bringing home WNBA star Brittney Griner and another jailed American Paul Whelan, Secretary of State Antony Blinken said Wednesday, July 27, 2022. In a sharp reversal of previous policy, Blinken also said he expects to speak with his Kremlin counterpart for the first time since before Russia invaded Ukraine. (Sofia Sandurskaya, Moscow News Agency photo via AP, File) 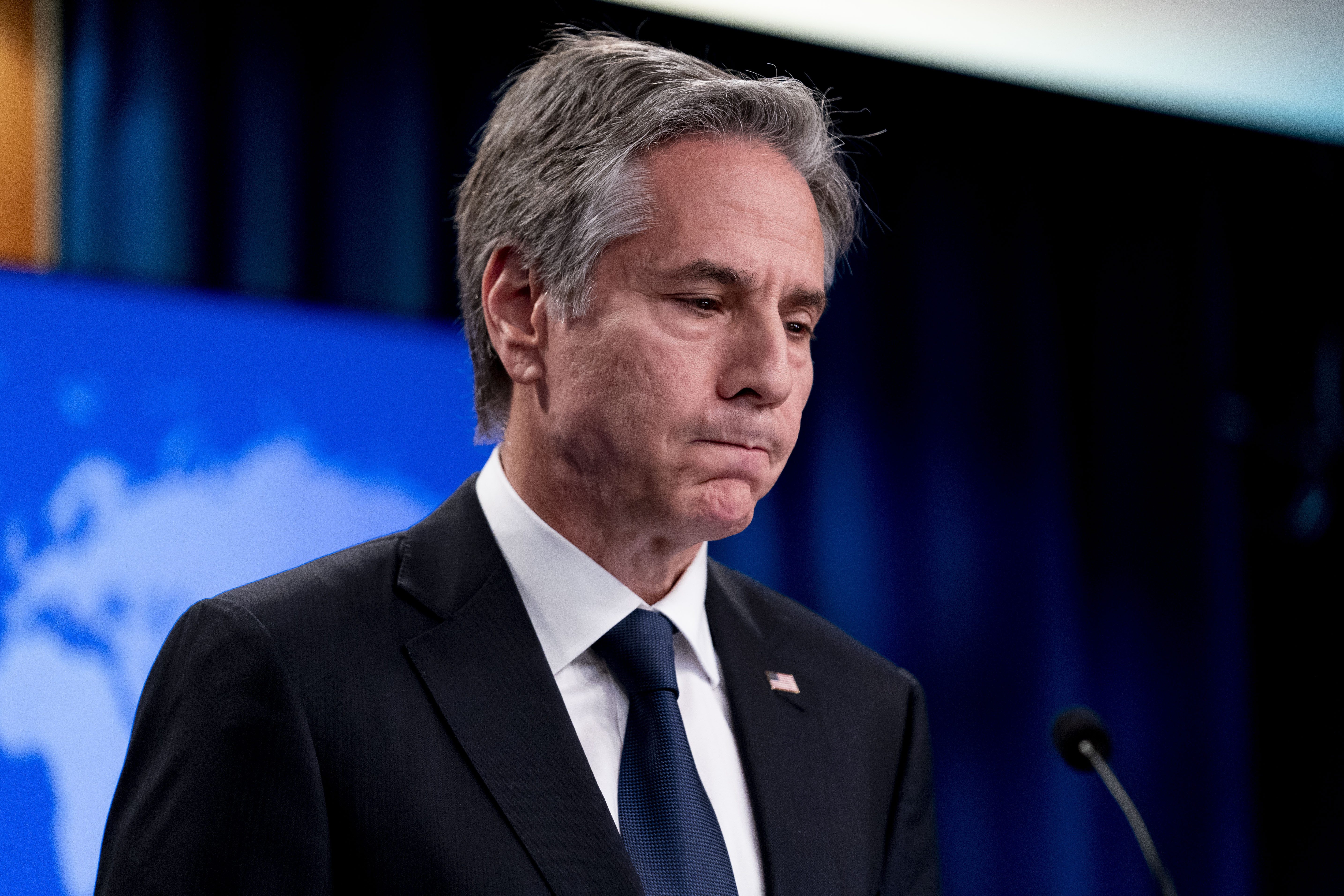 Secretary of State Antony Blinken ends a news conference, Wednesday, July 27, 2022, at the State Department in Washington. The Biden administration has offered a deal to Russia aimed at bringing home WNBA star Brittney Griner and another jailed American Paul Whelan. That's according to Blinken, who also revealed that he had asked to speak with his Kremlin counterpart for the first time in months in hopes of expediting an answer from Russia. (AP Photo/Andrew Harnik)