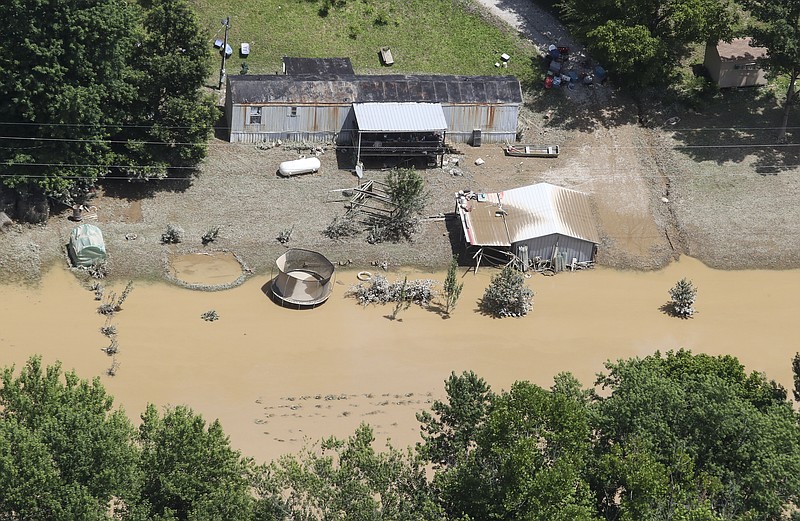 in this aerial photo, some homes in Breathitt County, Ky., are still surrounded by water on Saturday, July 30, 2022, after historic rains flooded many areas of Eastern Kentucky killing multiple people. A thin film of mud from the retreating waters covers many cars and homes. (Michael Clevenger/Courier Journal via AP)

WASHINGTON -- Vice President Kamala Harris called climate change an "immediate" and "urgent" crisis Monday as she detailed more than $1 billion in federal spending to respond to disasters such as deadly flooding in Kentucky and wildfires ravaging her home state of California.

On a visit to Miami, Harris announced a series of grants being made available to states to help communities across the nation prepare for and respond to climate-related disasters.

Touring the National Hurricane Center before the grant announcement, Harris said disasters such as the Kentucky floods and California wildfires show "how immediate, how current and how urgent" it is to address extreme weather being experienced in the United States and around the world.

"Climate change has become a climate crisis, and a threat has now become a reality," she said in a speech at Florida International University.

Harris cited deadly floods that have swept through Kentucky and Missouri, "washing away entire neighborhoods," leaving at least 35 dead, including children. At least two people were killed in a wildfire in Northern California that was among several fires menacing thousands of homes in the western U.S. Hot and gusty weather and lightning storms threatened to boost the danger that the fires will keep growing,

"The devastation is real. The harm is real. The impact is real," Harris said. "And we are witnessing it in real time."

In 2021, the United States experienced 20 climate-related disasters that each caused more than $1 billion in damage, Harris said, citing a report by the National Oceanic and Atmospheric Administration. There were about six such disasters per year in the 1990s.

"The frequency has accelerated in a relatively short period of time," Harris said. "The science is clear. Extreme weather will only get worse, and the climate crisis will only accelerate."

The White House is leading a governmentwide response to climate disasters that "recognizes the urgency of this moment and our ability to do something about it," Harris said, adding that leaders such as herself and President Joe Biden "have a duty to act, not only after disaster strikes, but before disaster strikes, and that is why we are here today."

The billion-dollar grant program announced by Harris doubles spending from last year on programs to defend against extreme weather events across the country. Biden announced last month that the administration will double spending yet again in the budget year that begins in October, spending $2.3 billion to help communities cope with soaring temperatures through programs administered by FEMA, the Department of Health and Human Services and other agencies.

The Building Resilient Infrastructure and Communities, or BRIC, program, supports states, local communities, tribes and territories on projects to reduce climate-related hazards and prepare for natural disasters such as floods and wildfires. The program is funded through FEMA's Disaster Relief Fund and the bipartisan infrastructure law signed by Biden last year.

A total of $1 billion will be made available through the BRIC program, with another $160 million to be offered for flood mitigation assistance, she said.

"My city doesn't debate whether the climate is changing, we simply look at the ground on a sunny day and see flooding," Gelber said.

Kern County, Calif., received nearly $40 million for underground water storage to allow access to clean water during droughts, while Austin, Texas, received money to begin upgrading its power grid "so that homes and businesses and houses of worship can keep on the electricity during summer and winter storms," Harris said.

The grant program is among a series of Biden administration actions intended to reduce heat-related illness and protect public health, including a proposed workplace heat standard.

Two bodies were found inside a charred vehicle in a driveway in the wildfire zone of a raging California blaze that was among several menacing thousands of homes Monday in the Western U.S., officials said. Hot and gusty weather and lightning storms threatened to boost the danger that the fires will keep growing,

The McKinney Fire in Northern California near the state line with Oregon exploded in size to nearly 87 square miles after starting Friday in the Klamath National Forest, firefighting officials said. It is California's largest wildfire of the year so far and officials have not yet determined the cause.

The vehicle and the bodies were found Sunday morning in the driveway of a residence near the remote community of Klamath River, the Siskiyou County Sheriff's Office said in a statement.

Nearly 5,000 homes and other structures were threatened and an unknown number of buildings have burned, said Adrienne Freeman, a spokesperson for the U.S. Forest Service.

The smoky blaze cast an eerie, orange-brown hue in one neighborhood where a brick chimney stood surrounded by rubble and scorched vehicles on Sunday. Flames torched trees along State Route 96 and raced through hillsides in sight of homes.

Firefighting crews on the ground were trying to prevent the blaze from moving closer to the town of Yreka, population about 7,500. The blaze was about 4 miles away as of Monday.

A second, smaller fire in the region that was sparked by dry lightning Saturday threatened the tiny California community of Seiad Valley.

Freeman said "there has been significant damage and loss along the Highway 96 corridor" that runs parallel to the Klamath River and is one of the few roads in and out of the region.

She added: "But just how much damage is still being assessed."

In northwestern Montana, winds picked up Monday afternoon on a fire burning in forested land west of Flathead Lake, forcing fire managers to ground all aircraft and leading the Lake County Sheriff's Office to start evacuating residents on the northeastern corner of the fire.

The fire was putting up a lot of smoke, creating visibility problems for aircraft, said Sara Rouse, a spokesperson for the fire management team.

The fire, which started Friday afternoon near the town of Elmo on the Flathead Indian Reservation, measured 20 square miles, fire officials said.

The Moose Fire in Idaho has burned more than 85 square miles in the Salmon-Challis National Forest while threatening homes, mining operations and fisheries near the town of Salmon. It was 23% contained Monday.

And a wildfire raging in northwestern Nebraska led to evacuations and destroyed or damaged several homes near the small city of Gering. The Carter Canyon Fire began Saturday as two separate fires that merged. It was about 30% contained by early Monday.

Scientists have said climate change has made the West warmer and drier over the last three decades and will continue to make weather more extreme and wildfires more frequent and destructive.

The U.S. Forest Service shut down a 110-mile section of the famed Pacific Crest Trail in Northern California and southern Oregon. Sixty hikers in that area were helped to evacuate Saturday, according to the Jackson County Sheriff's Office in Oregon, which aided in the effort.

Another round of rainstorms hit flooded Kentucky mountain communities Monday as more bodies emerged from the sodden landscape, and the governor warned that high winds could bring another threat -- falling trees and utility poles.

Gov. Andy Beshear said the death toll rose to 37 while hundreds of people remained unaccounted for five days after one of the nation's poorest regions was swamped by nearly a foot of rain. The water poured down hillsides and into valleys and hollows, engulfing entire towns. Mudslides marooned some people on steep slopes.

Beshear suggested that many of the unaccounted for would be located when cellphone service resumes.

"When cell service gets back up, we do see a whole lot of people finding people they love and care about, so looking forward to those stories," he said.

Radar indicated that up to 4 more inches of rain fell Sunday, and the National Weather Service warned that slow-moving showers and thunderstorms could provoke more flash flooding through this morning.

"If things weren't hard enough on the people of this region, they're getting rain right now," Beshear said Monday at the Capitol in Frankfort. "Just as concerning is high winds -- think about how saturated the ground has been." The wind "could knock over poles, it could knock over trees. So people need to be careful."

An approaching heat wave means "it's even going to get tougher when the rain stops," the governor said. "We need to make sure people are ultimately stable by that point."

Chris Campbell, president of Letcher Funeral Home in Whitesburg, said he's begun handling burial arrangements for people who died. His funeral home recently buried a 67-year-old woman who had a heart attack while trying to escape her home as the water rose.

Campbell said his 90-year-old grandmother lost the entire home where she's lived since 1958. She managed to escape to a neighbor's house with only some photos. Everything else is gone, he said.

More than 12,000 utility customers remained without power. At least 300 people were staying in shelters.

The floods were unleashed last week when 8 to 10 1/2 inches of rain fell in just 48 hours in parts of eastern Kentucky, southern West Virginia and western Virginia.

The disaster was the latest in a string of catastrophic deluges that have pounded parts of the U.S. this summer, including St. Louis. Scientists warn that climate change is making such events more common.

Meanwhile, in Kentucky, nighttime curfews were declared in response to reports of looting in two of the devastated communities -- Breathitt County and the nearby city of Hindman in Knott County.

Breathitt County declared a countywide curfew from 10 p.m. to 6 a.m. The only exceptions were for emergency vehicles, first responders and people traveling for work.

"I hate to have to impose a curfew, but looting will absolutely not be tolerated. Our friends and neighbors have lost so much. We cannot stand by and allow them to lose what they have left," County Attorney Brendon Miller said in a Facebook post.

Breathitt County Sheriff John Hollan said the curfew decision came after 18 reports of looting. He said people were stealing from private property where homes were damaged. No arrests have been made. 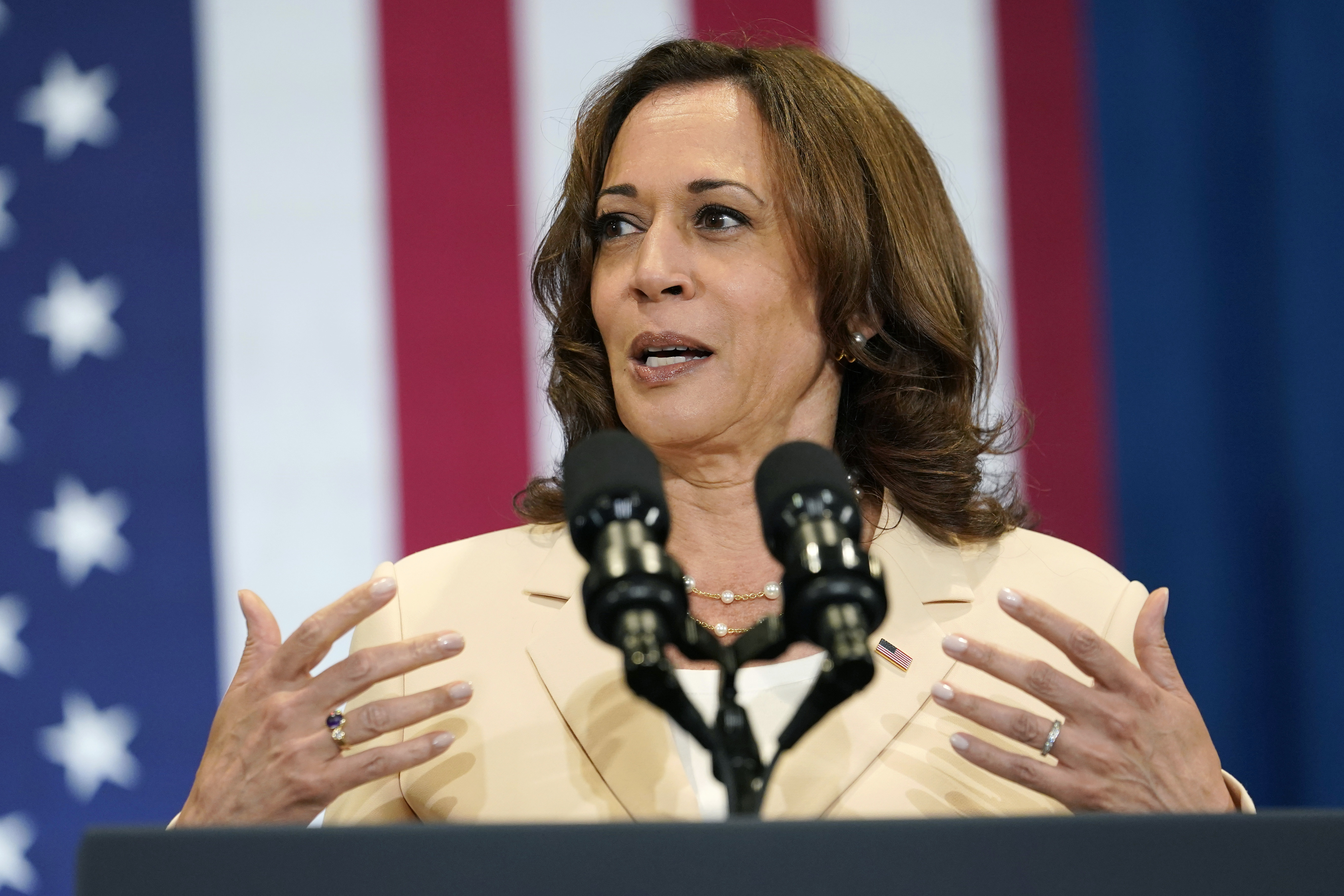 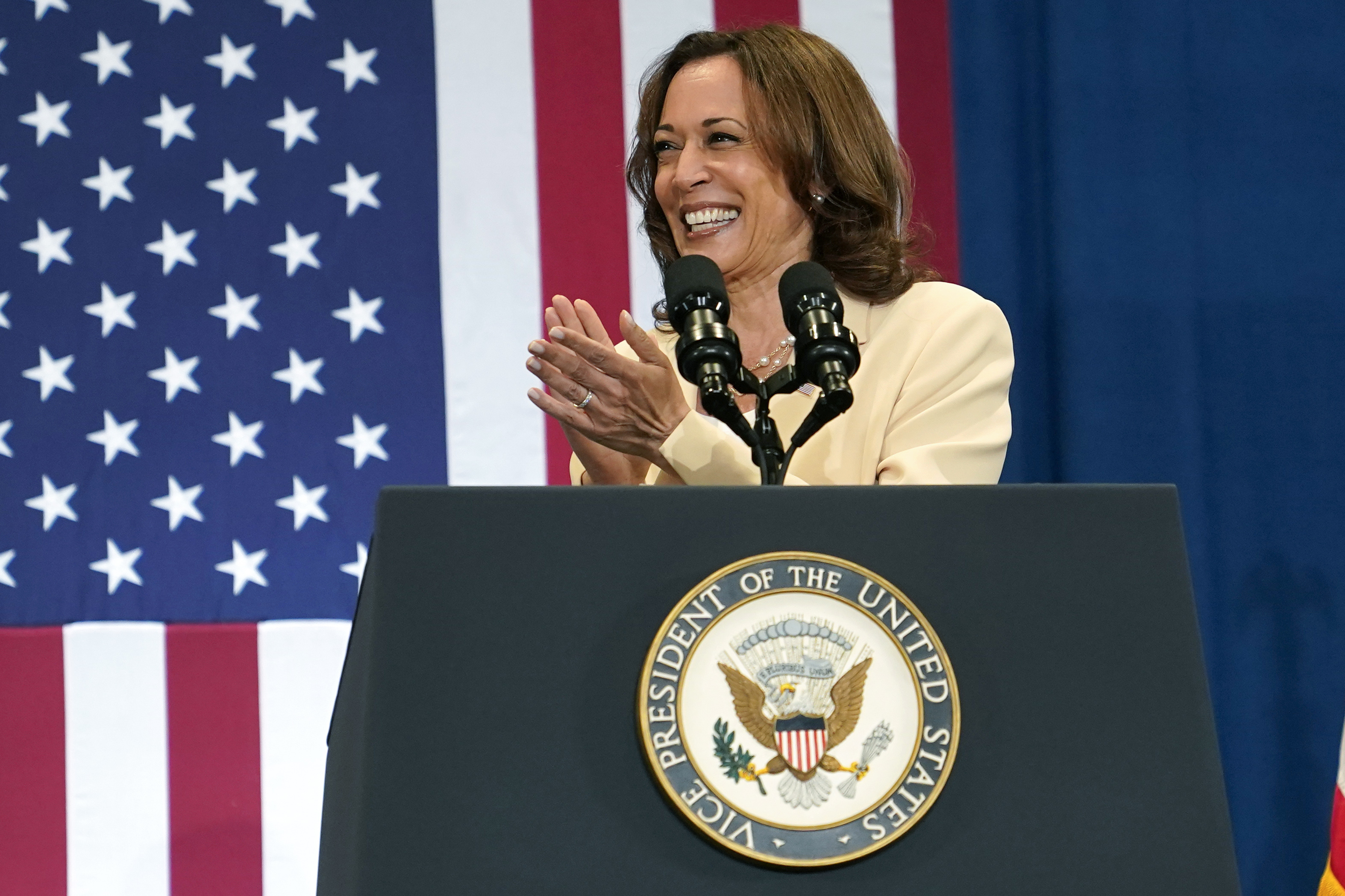 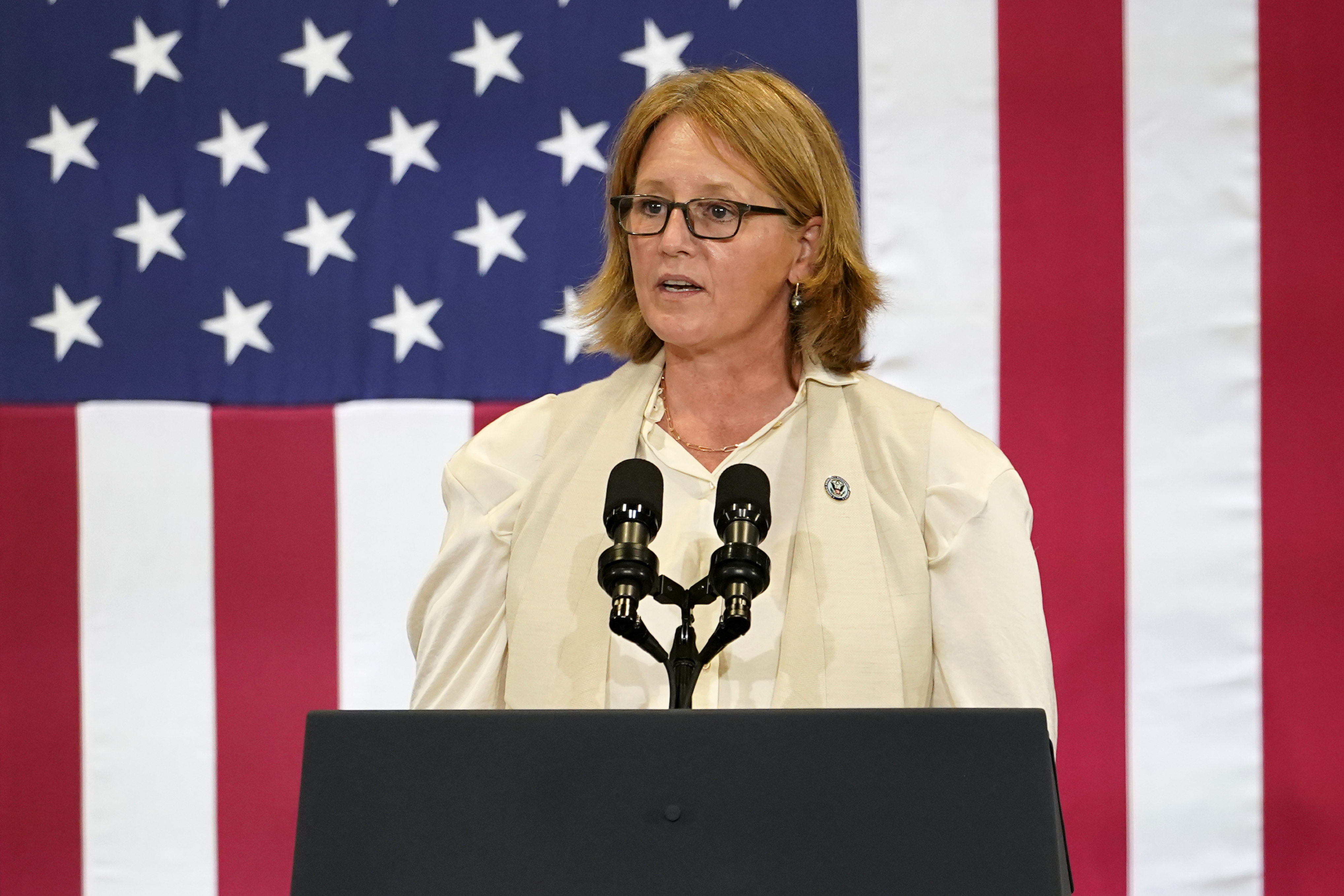 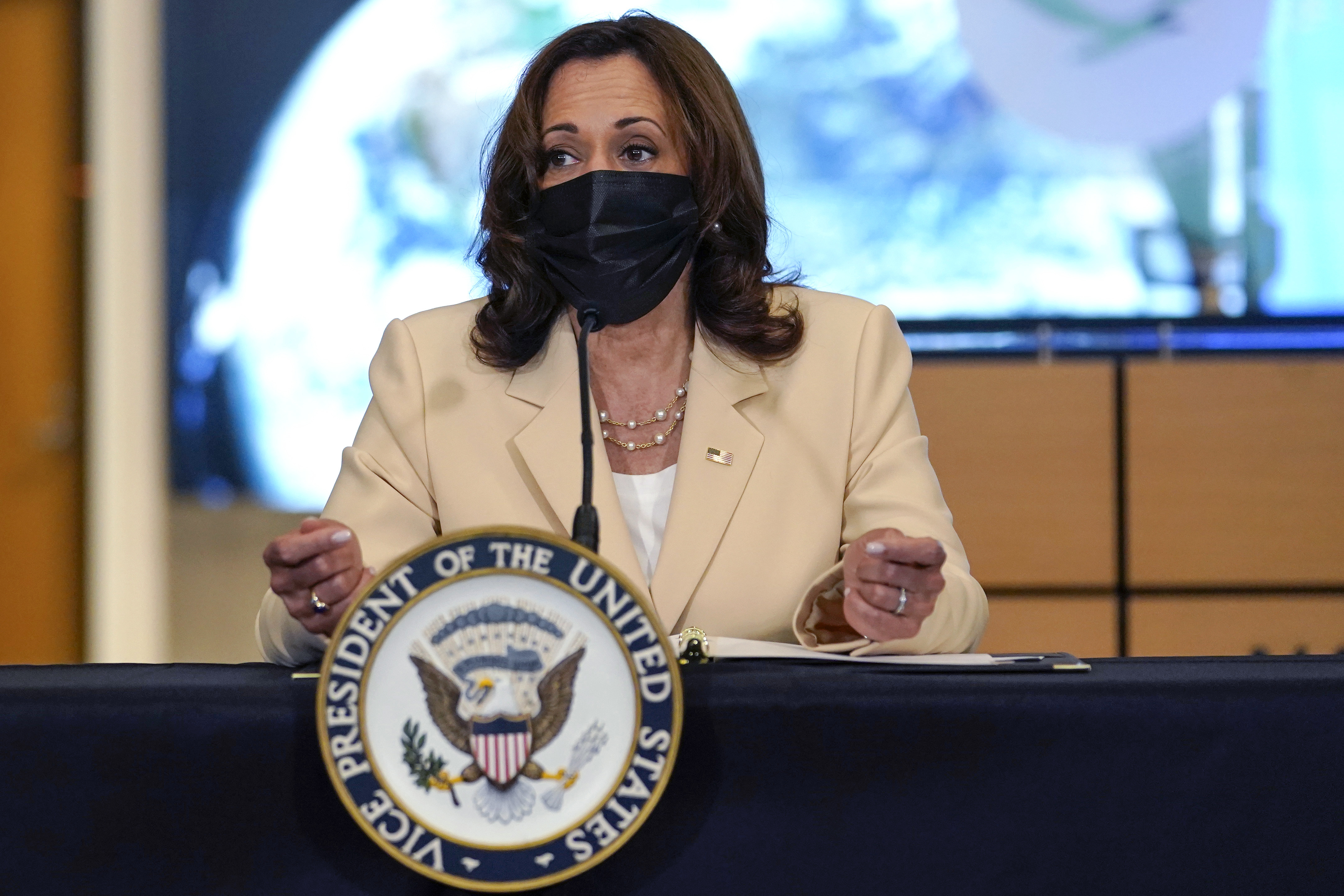 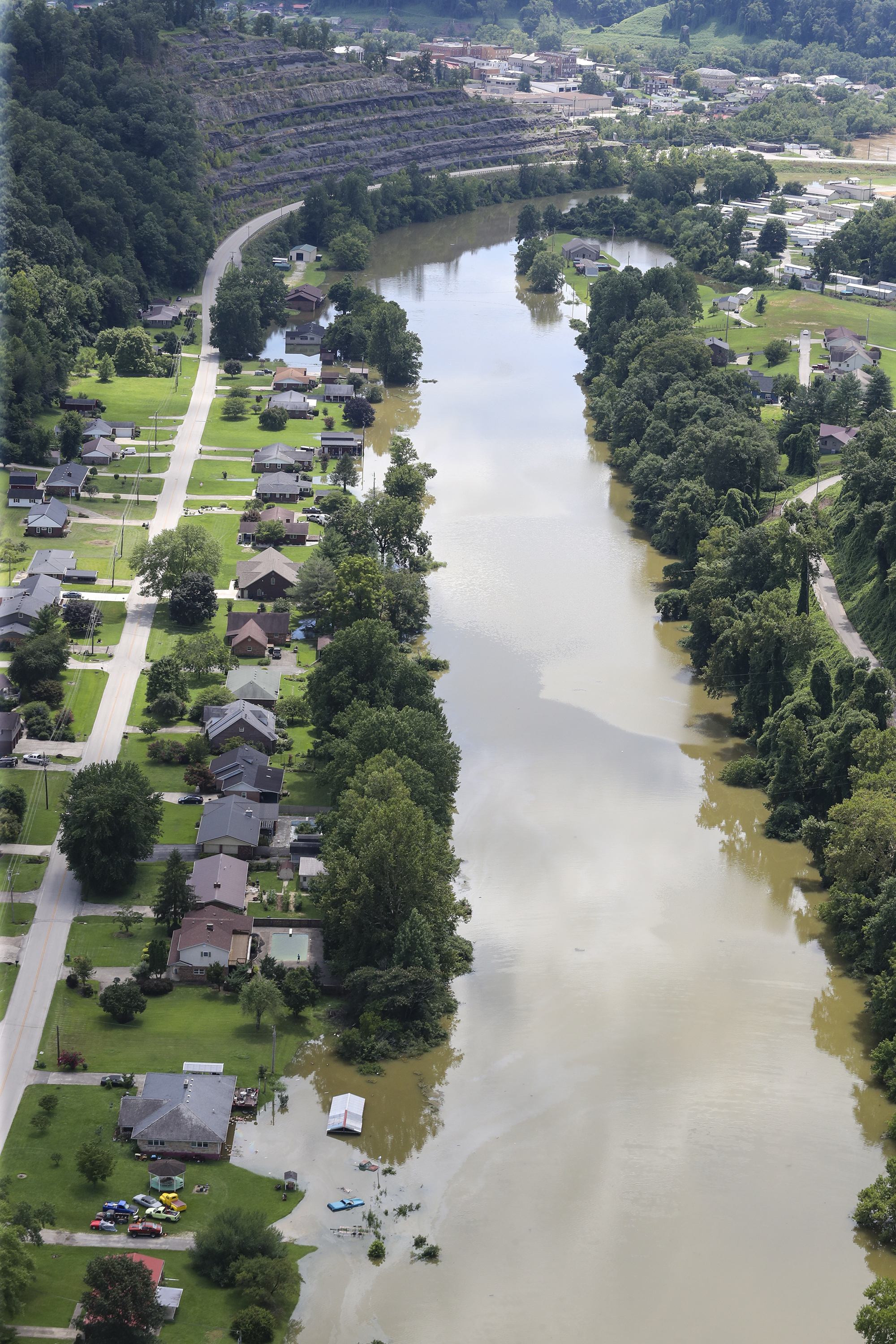 In this aerial image, some homes in Breathitt County, Ky., are still surrounded by water on Saturday, July 30, 2022, after historic rains flooded many areas of Eastern Kentucky killing more than two dozen people. (Michael Clevenger/Courier Journal via AP) 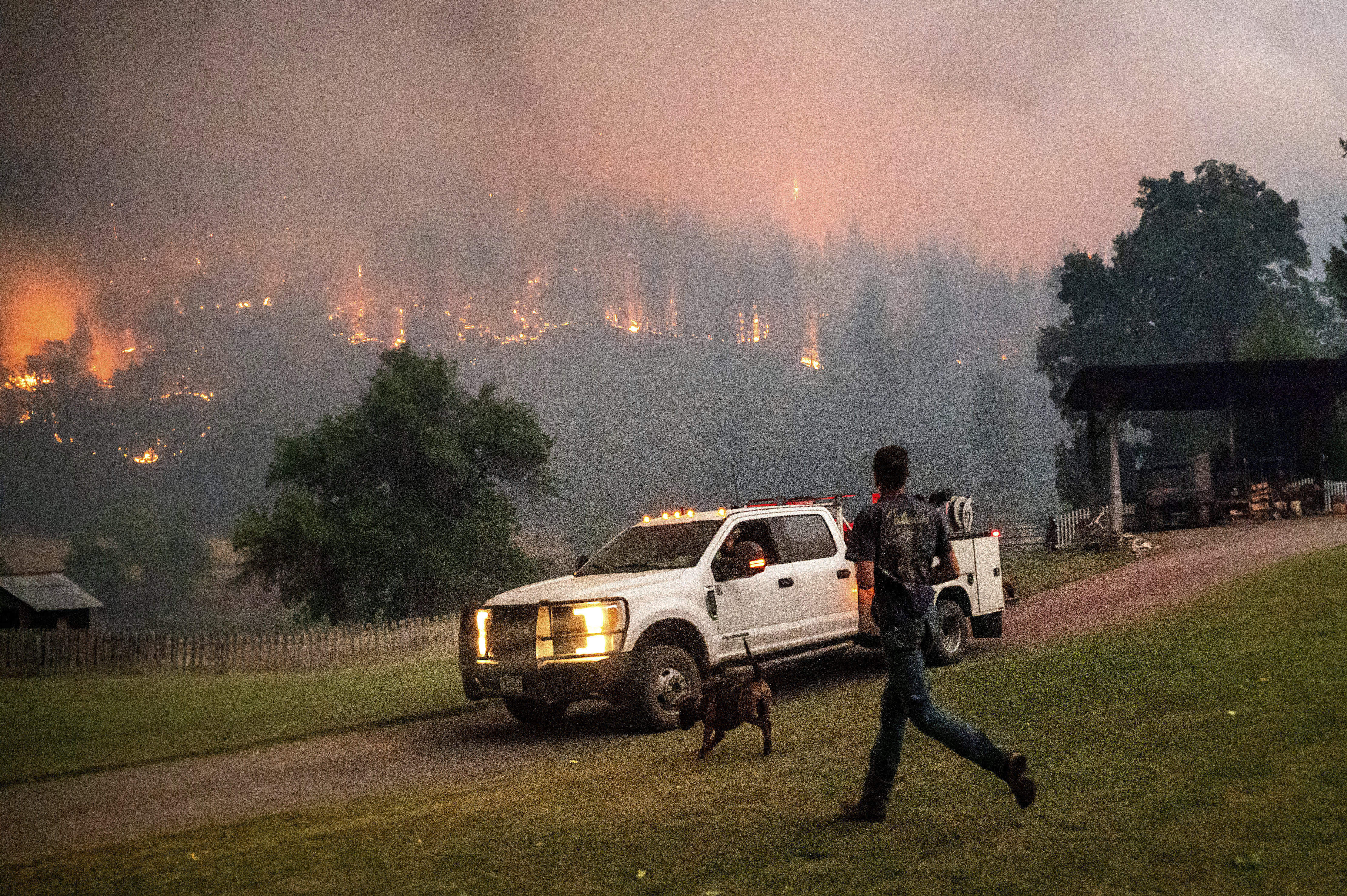 A man runs to a truck as a wildfire called the McKinney fire burns in Klamath National Forest, Calif., on Saturday, July 30, 2022. (AP Photo/Noah Berger) 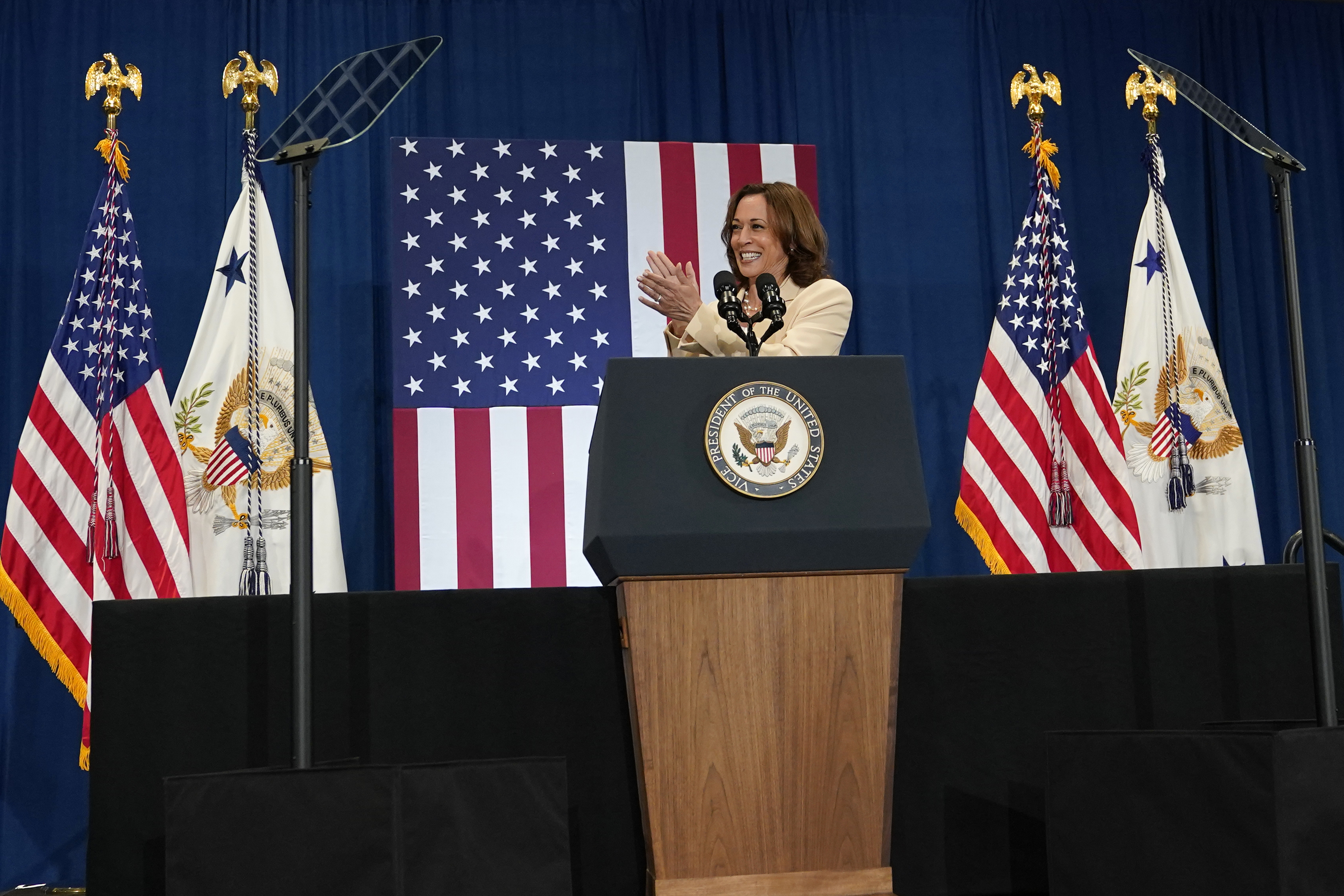 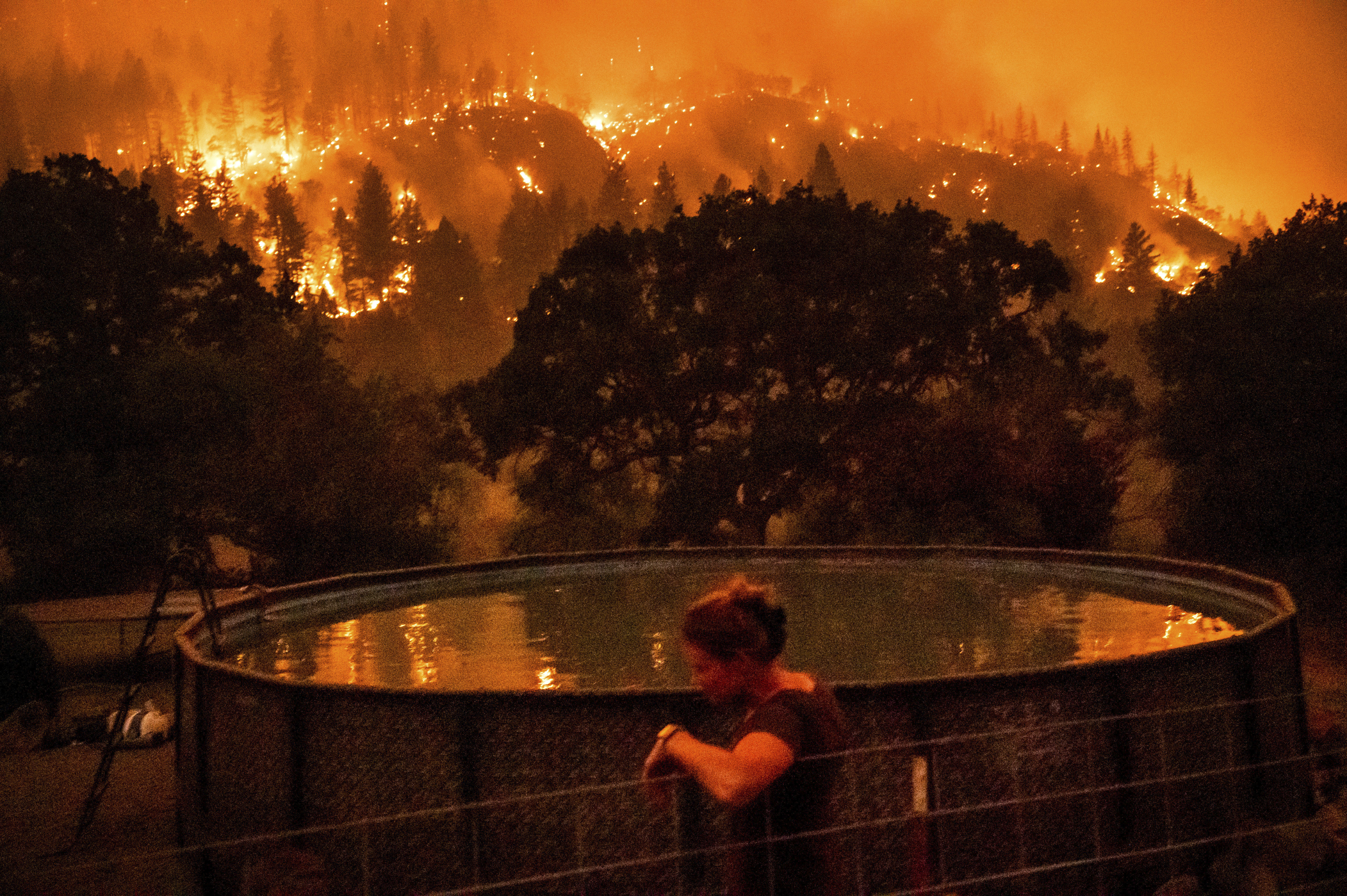 Angela Crawford leans against a fence as a wildfire called the McKinney fire burns a hillside above her home in Klamath National Forest, Calif., on Saturday, July 30, 2022. Crawford and her husband stayed, as other residents evacuated, to defend their home from the fire. (AP Photo/Noah Berger) 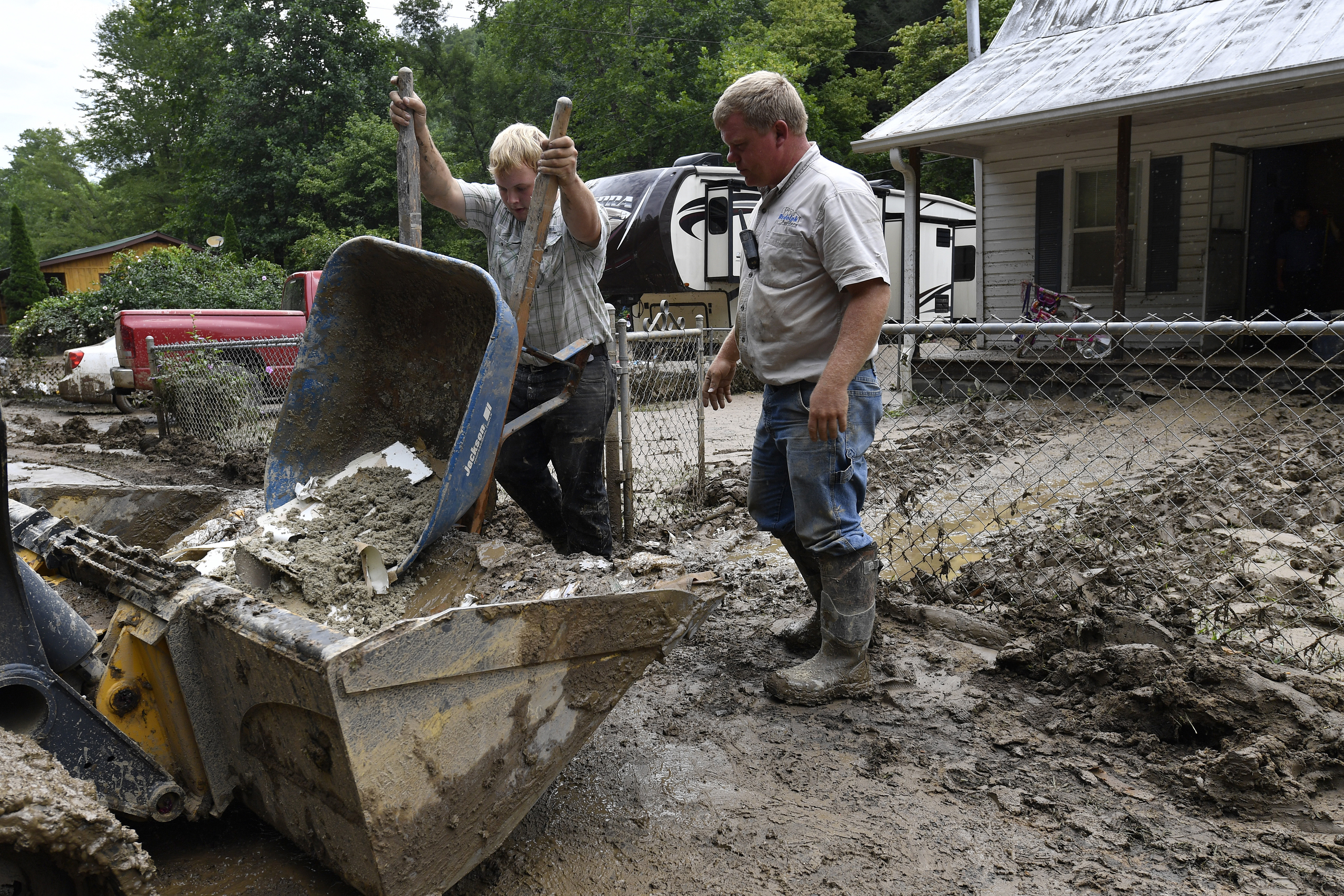