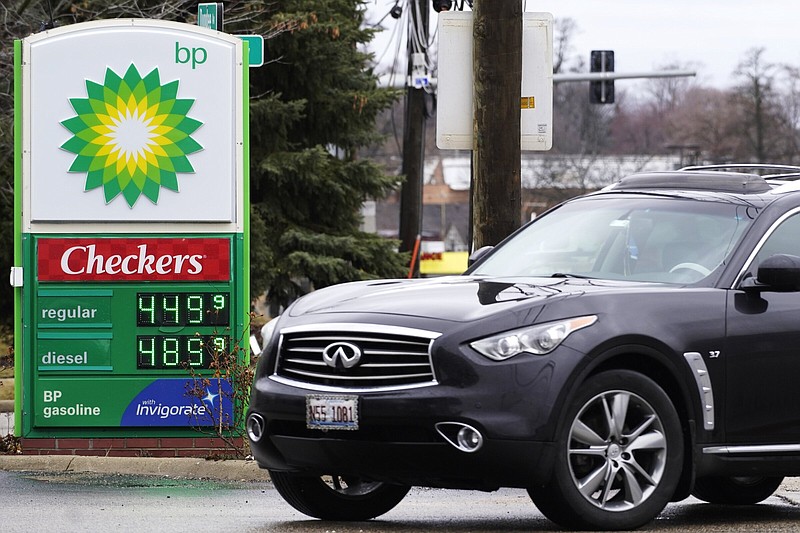 LONDON -- BP reported $8.5 billion in profit Tuesday for its second quarter, the highest in 14 years, making it the latest oil giant to cash in on higher crude prices as Russia's war in Ukraine disrupt global energy markets.

The total second-quarter profits for Western oil companies is now more than $55 billion, marking a stunning turnaround from the early months of the covid-19 pandemic.

The windfall comes as consumers around the world are feeling the pain of decades-high inflation and a cost-of-living crisis that's particularly painful at the gas pump.

The price of crude oil surged above $120 per barrel in March and again in June before falling back, and it remains up 34% compared with a year ago. The national average gas price in the United States jumped in tandem, to over $5 dollar a gallon for the first time, AAA reported, although prices are now dropping.

President Joe Biden has warned the industry that he is considering all options to curb their profits if gas prices remain high. The president and other Democrats have consistently railed against the oil industry's earnings at a time when drivers are struggling to cover the cost of filling up.

While Biden's tools are limited -- there is not enough congressional support to advance his plan for a windfall profits tax -- that could change should he declare a "climate emergency," as the administration has said is possible.

Energy analysts predict that if gas prices start shooting up again, Biden could use his presidential powers to assert more government control over domestic oil and gas producers.

Oil executives have pushed back on the Biden administration's criticisms, saying the only way to remedy the imbalance of supply and demand in global oil markets is to pump more oil.

"I want to be clear that Chevron shares your concerns over the higher prices that Americans are experiencing," Chevron chief executive Mike Wirth told Biden in an open letter. "And I assure you that Chevron is doing its part to help address these challenges by increasing capital expenditures to $18 billion in 2022, more than 50% higher than last year."

Analysts also note that the oil market is intensely cyclical. The industry suffered during the 2008-2009 financial crisis, again between 2014 and 2016, and most recently during the first two years of the coronavirus pandemic, says Pavel Molchanov of Raymond James investment bank.

"The industry is currently enjoying record levels of profitability, but two years ago the covid-related commodity crash was an epic debacle," Molchanov said in an email.

BP's second-quarter results, up from $6.2 billion in the first quarter, were driven by strong refining margins, "continuing exceptional oil trading performance" and higher fuel prices, the company said in a statement.

A surge in global demand and the war in Ukraine have been key to the rise in prices, directly increasing the company's profits.

"Today's results show that bp continues to perform while transforming," CEO Bernard Looney said in a statement. "We do this by providing the oil and gas the world needs today - while at the same time, investing to accelerate the energy transition."

As a result of the high profits, the company said it would boost dividend payments by 10%, to 6.006 cents per ordinary share, more than it had previously expected.

"This increase reflects the underlying performance and cash generation of the business," the company said.

BP said it expects oil and gas prices to remain high into the third quarter "due to ongoing disruption to Russian supply" and "reduced levels of spare capacity." The geopolitical outlook has also led to a lack of European gas supply that is "heavily dependent on Russian pipeline flows," which are expected to keep prices "elevated."

Shell has announced even larger share buybacks totaling $6 billion, while Exxon reported that it distributed $7.6 billion to shareholders when dividends are included.

Patrick De Haan, chief of petroleum analysis at GasBuddy, said major oil companies do appear to be investing in increasing their supply. But the in the near-term their focus seems to be on shareholder value, he said.

Biden has accused U.S. oil giants of capitalizing on the tight circumstances.

Speaking at the Port of Los Angeles in June, he said: "Exxon made more money than God this year." The company pushed back, admonishing his administration for its attempts "to criticize, and at times vilify, our industry" as oil companies deny accusations that their policies are keeping prices artificially high.

In May, Britain's government announced a 25% windfall tax on the profits of oil and gas firms that would be used to assist low-income households struggling with a sharp spike in the cost of living. U.S. lawmakers have considered a similar tax, but it would be unlikely to pass in the evenly divided Senate.

Leftist politicians and advocacy groups in both the U.S. and the U.K. called for additional taxes on oil companies' windfall profits.

Greenpeace U.K. tweeted "there's something particularly obscene and cruel about gas companies like Shell and BP making record profits while consumers are going to struggle to keep warm this winter."