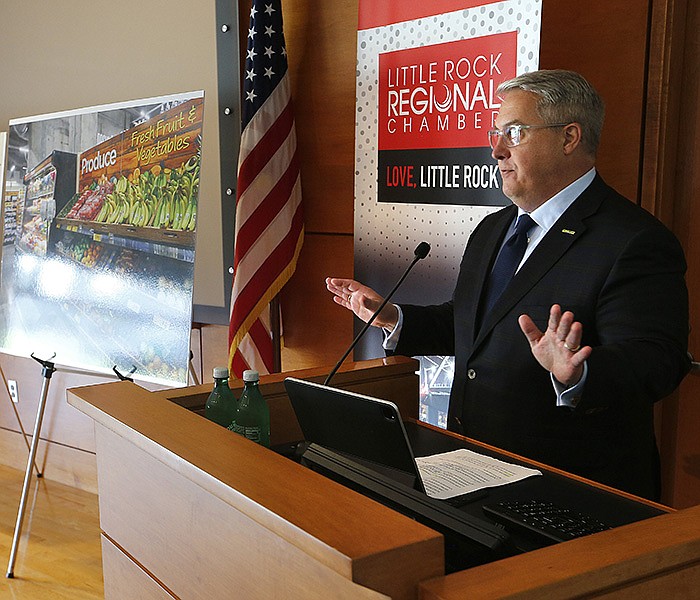 The retailer Dollar General is now offering fresh fruits and vegetables at 10 of its 16 stores in Little Rock, a move officials publicized with a news conference Tuesday morning at the Little Rock Regional Chamber of Commerce.

Earlier this year, the Little Rock Board of Directors approved a resolution meant to temporarily bar new discount-style retailers like Dollar General and Family Dollar in locations where those stores would need to request a zoning change.

The resolution expressed concerns about residents' access to fresh and healthy food amid the proliferation of discount stores. However, one week later, the city board voted to overturn the nine-month moratorium.

According to a news release from Dollar General, in 2020, individuals at the Little Rock economic booster group Fifty for the Future began exploring ways to address food deserts -- a term that generally refers to areas where fresh or healthy foods are not available to residents because of where grocery stores are located or cost considerations.

Their work focused on finding a replacement for a shuttered grocery store in the 12th Street area, the news release said, but later led to dialogue with Dollar General because local officials were simultaneously working on the company's planned distribution center in North Little Rock.

The roughly $140 million distribution center on the other side of the Arkansas River is expected to be completed next year.

After closing temporarily for renovations, a Dollar General store located at 4748 Springer Boulevard began offering fresh produce as the company sought to expand the sale of fruits and vegetables to other Little Rock stores, the Arkansas Democrat-Gazette reported in March.

The Springer Boulevard store is now one of the 10 Dollar General locations offering fresh produce, according to Tuesday's news release. Other locations include 3124 W. Roosevelt Road, 5023 Baseline Road and 3500 John Barrow Road.

At the news conference, Little Rock Mayor Frank Scott Jr. said he and other officials "want to continue to have other avenues in addition to Dollar General, but we're grateful that Dollar General is leading the way and setting the trend."

According to Brophy, the company offers fresh produce in 2,300 stores nationwide.

He said the Little Rock stores were quickly flipped to offer produce, recalling that nine of the 10 stores were changed in about a three-week period in June.

In addition to Scott and Brophy, the event featured Hugh McDonald, chairman of the Fifty for the Future committee that focused on food deserts, as well as U.S. Rep. French Hill and others.

Jay Chesshir, president and chief executive officer of the Little Rock Regional Chamber of Commerce, said by phone after the news conference that no incentives were discussed or offered to Dollar General with regard to the decision to sell fresh produce.

City Director Kathy Webb of Ward 3, who sponsored the city board's Jan. 18 resolution targeting new zoning approvals for discount retailers like Dollar General, said in an interview Tuesday afternoon that the measure was based on input from constituents who were not eager to have another dollar store locate in their neighborhood.

After visiting some of the stores that offer produce, "while I'm glad that they're offering that, I continue to have concerns," Webb said by phone.

Some 35 cities have taken steps to limit the number of dollar-style stores, or their proximity to one another, said Webb, who also serves as the executive director of the Arkansas Hunger Relief Alliance.

Webb said that "a Dollar General that offers produce is not equal to a grocery store, and there is a significant amount of data that suggest that a saturation of dollar stores will pretty much eliminate an attempt by a grocery store to come in."