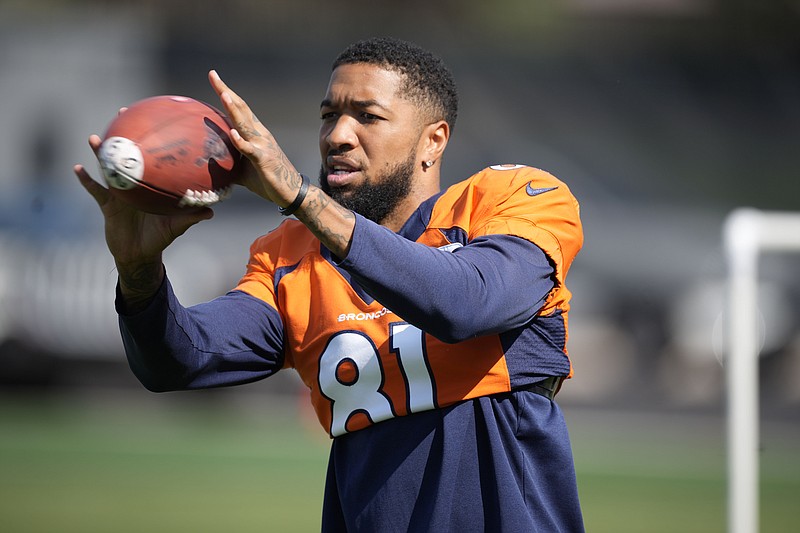 The Denver Broncos have lost a top receiver to a torn ACL for a third consecutive season. Wide receiver Tim Patrick was carted off after catching a pass from Russell Wilson at the Denver Broncos' training camp practice Tuesday, and a person with knowledge of the diagnosis told The Associated Press that Patrick sustained a season-ending torn ACL. The person spoke on condition of anonymity because neither Patrick nor the Broncos provided an update following his MRI. Patrick's injury continues a run of misfortune for Denver's wide receivers. Last year, KJ Hamler blew out a knee in Week 3 and the year before that Courtland Sutton was lost for the season with a torn ACL in Week 2. Patrick made a leaping grab over cornerback Essang Bassey but his right knee buckled as he made his first move after the catch. Patrick was taken for an MRI, as was second-year running back Damarea Crockett (Little Rock Christian), who hobbled off with a knee injury earlier in practice. Crockett tweeted that he sustained a torn ACL, ending his season.

Saints second-year receiver Kawaan Baker is facing a six-game suspension for violating the NFL's performance-enhancing drug policy, the league announced on Tuesday. The statement from the NFL said Baker is eligible to participate in all preseason practices and games, and will be allowed to return to the Saints' active roster on Oct. 17, following New Orleans Week 6 home game against Cincinnati. Baker, who played in college for South Alabama, was New Orleans' seventh-round draft choice in 2021. He spent the bulk of his first NFL season on the Saints' practice squad. Baker played against Miami and Carolina, making one tackle on special teams.

Irv Smith out after surgery

Minnesota Vikings tight end Irv Smith will miss the remainder of the preseason after having surgery on his injured thumb. Coach Kevin O'Connell announced that Smith had the procedure done Tuesday after getting hurt during practice Monday. He's on track to return for the first game Sept. 11 against Green Bay. "We still feel very strongly about our process to get him back and hopefully have him, barring any setbacks, available for that opener," O'Connell said. Smith missed the entire 2021 season after surgery on his injured knee, and the Vikings are counting on him as their top player at the position this year. Smith has 676 yards and seven touchdowns over two NFL seasons, after being drafted in the second round out of Alabama in 2019.

Nick Kyrgios beat American Marcos Giron at the Citi Open on Tuesday, the Australian's first singles match since reaching the Wimbledon final. Less than a month since reaching his first Grand Slam final before losing to Novak Djokovic, Kyrgios defeated Giron 6-2, 6-3. It won't help him get over falling short at Wimbledon, which has not been easy. But, winning more may boost his confidence. "That was like the golden opportunity I felt for me," Kyrgios said of Wimbledon. "There are so many things I would have done differently I think now that I have digested that match, but I'm doing all the right things to put myself in that position again. I think I'm doing that, and my whole team is helping me achieve that goal." Following a tradition he started when he won this hard-court tuneup for the U.S. Open in 2019, he asked a fan where he should serve for match point and moved on to face Tommy Paul in the round of 32. Kyrgios is trying to move past the memory of losing to Djokovic at Wimbledon and bowing out in the first round of the Citi Open a year ago.

Rebuff, who won one of last week's two elimination races, drew the No. 1 post and was made the 9-5 morning-line favorite in the $1 million Hambletonian at the Meadowlands on Saturday. Jiggy Jog S, who won the other elimination and is one of two fillies in the race, drew the No. 5 post and was made the 4-1 third choice. Yonkers Trot champion Joviality S, the other filly in the field of 3-year-olds, got the No. 2 post and is the 7-2 second choice. Elimination winners drew for posts one through five on Tuesday in Cream Ridge, N.J. The remaining horses followed in an open draw. A filly has won two of the past four Hambletonians. This is the second time in three years that two fillies advanced to the final. Ramona Hill and Sister Sledge faced the boys in 2020, with Ramona Hill winning both her elimination and the final. The Hambletonian is the middle jewel in the Trotting Triple Crown, between the Yonkers Trot and Kentucky Futurity, which will be held Oct. 9 at Lexington's Red Mile.