RESTAURANT REVIEW: A taste of Louisiana — SAP’s Creole Cuisine has the flavors, but where's the French bread? 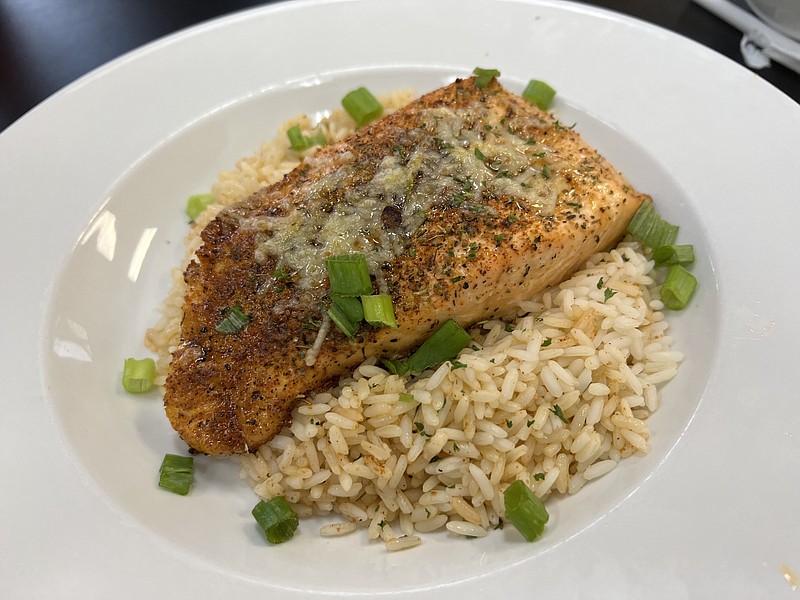 According to the motto on its website and menu, SAP's Creole Cuisine, a new restaurant in a Crystal Hill Road strip center, just on the North Little Rock side of Maumelle, serves "Authentic New Orleans cuisine. New Orleans raised. Arkansas made."

The restaurant name is the initials of chef/co-owner Sylvia Pennington, a New Orleans native who, we are told, landed in this neighborhood in the wake of Hurricane Katrina.

So, yes, it certainly creates the expectation that the cuisine is authentic New Orleans.

To be sure, however, we enlisted the help of two colleagues, one who grew up in Louisiana and another who spent nearly three decades living and working in New Orleans, and headed out last week to SAP's for lunch.

Louisiana Companion and New Orleans Companion verify that the three dishes we tried were, in fact, the real thing. And reinforced that they tasted good, though they fell a little short in some other areas: All three dishes were tepid, "which was weird because we were the only people there when we ordered," Louisiana Companion notes. Two of the dishes were distinctly watery. For all three, the balance between rice and everything else was heavily in favor of the rice.

Louisiana Companion says she'd give them another try, "but I think I would do takeout because there is not much atmosphere. Or maybe 'ambience' would be a better word choice."

The ambience is certainly simple. The place is modestly painted in Mardi Gras/New Orleans colors — purple and light gold — but it doesn't slap diners in the face. Seating is at simple composite-topped tables with standard cafeteria-style chairs. The only other decoration on the walls: touristy replicas of New Orleans street signs.

There is one distinct element about SAP's: black metal silverware (fork and spoon, but no knife), which we don't recall having encountered at any other area restaurant, table-prepped in a paper envelope.

One aspect of New Orleans authenticity, however, is definitely missing: No bread. Echoing our companions' cogent question: How can you sop with no bread? 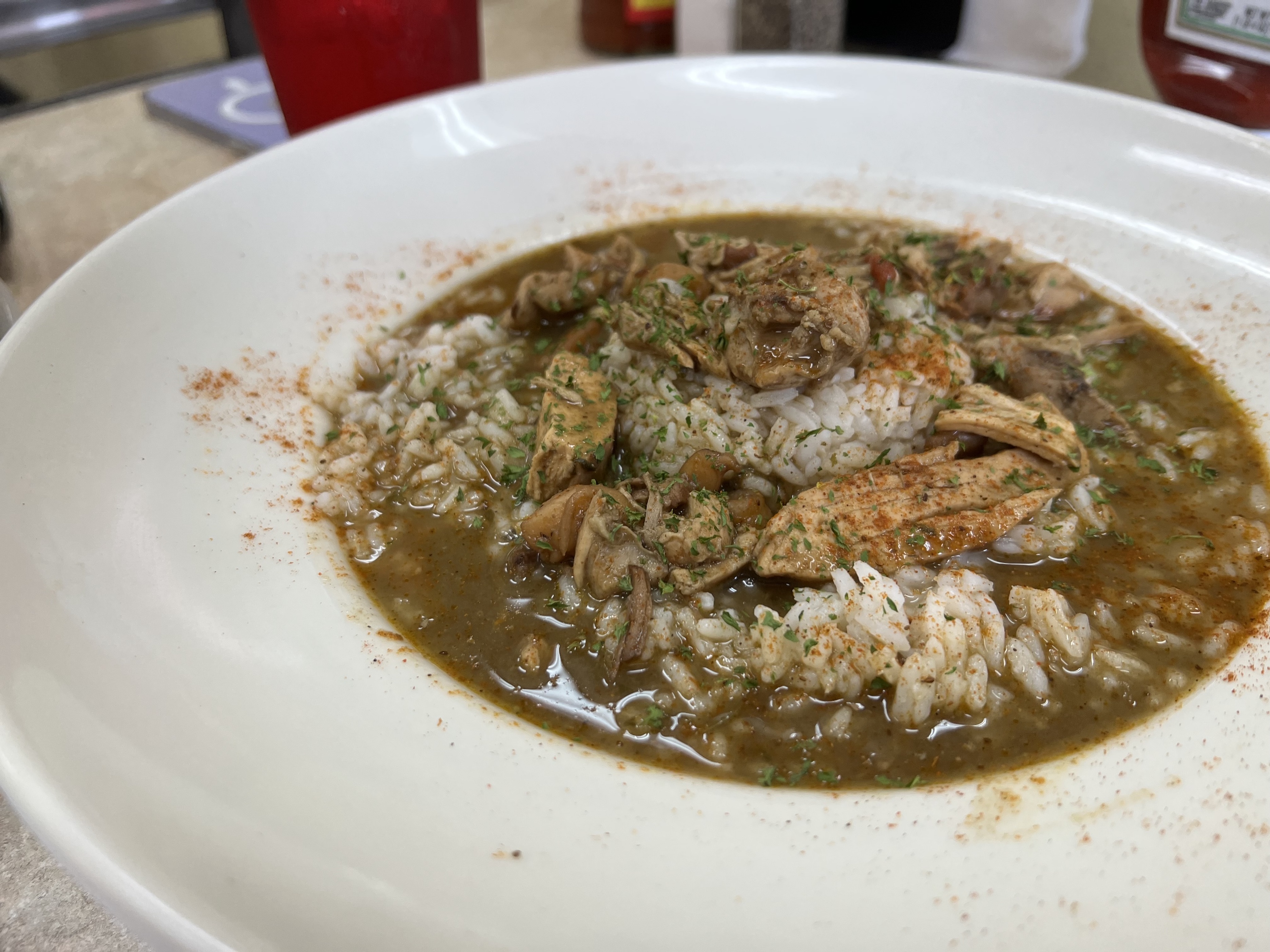 The 9th Ward Gumbo at SAP's Creole Cuisine features a light roux and doesn't contain okra. (Arkansas Democrat-Gazette/Eric E. Harrison)  The menu features a dozen or so "NOLA Classics," mostly named for some distinctive New Orleans-area locales (Bourbon Street, St. Charles, etc.), aspects (the "504" in the 504 shrimp and cheeseburger po' boys is the telephone area code) or characteristic phrases ("Who Dat"). The portions are huge, so if the menu prices look a little pricey, we'd say you get pretty close to what you pay for.

The menu description for the 9th Ward Gumbo ($11.95) lists boneless chicken, andouille sausage and shrimp with seasonings, "simmered in Authentic New Orleans roux," served over bed of rice. New Orleans companion noted right away that it was not a dark roux. And the dish was quite watery.

Note that the menu description does not include okra, and Louisiana Companion definitely missed it. (We, in our ignorance, have always assumed that "gumbo" and "okra" are synonymous, especially since the word "gumbo" comes from the West African word for "okra," which is "ki ngombo." But not necessarily.)

"This was definitely file' gumbo," she explains — file' powder comes from the dried and ground leaves of the sassafras tree and is a frequent gumbo ingredient, whether or not the dish contains okra. (Learn something new every day, we do. Another reason to bring in the experts.)

The gumbo was flavorful but not spicy; it benefited from a liberal dose of the Louisiana brand hot sauce from the bottle on our table. (It's on some tables but not all.) The all-white-meat chicken was very moist and tender and was definitely the warmest part of the dish.

New Orleans Companion's "Who Dat" Red Beans and Rice ($10.95) — red beans seasoned with "SAP's Creole seasoning" with andouille sausage, served over a bed of rice, had decidedly more kick than the gumbo. It also had more rice than beans and sausage combined. He confided to us, however, a suspicion that the beans might have been canned, not dry.

Our Desire Shrimp Etouffee ($15.95) had the most "zing," seasoned baby shrimp in a pleasantly spicy but not fiery tomato-ey sauce, over rice. Again, we ran out of etouffee long before we ran out of rice, and a big puddle of fluid remained in the bowl. 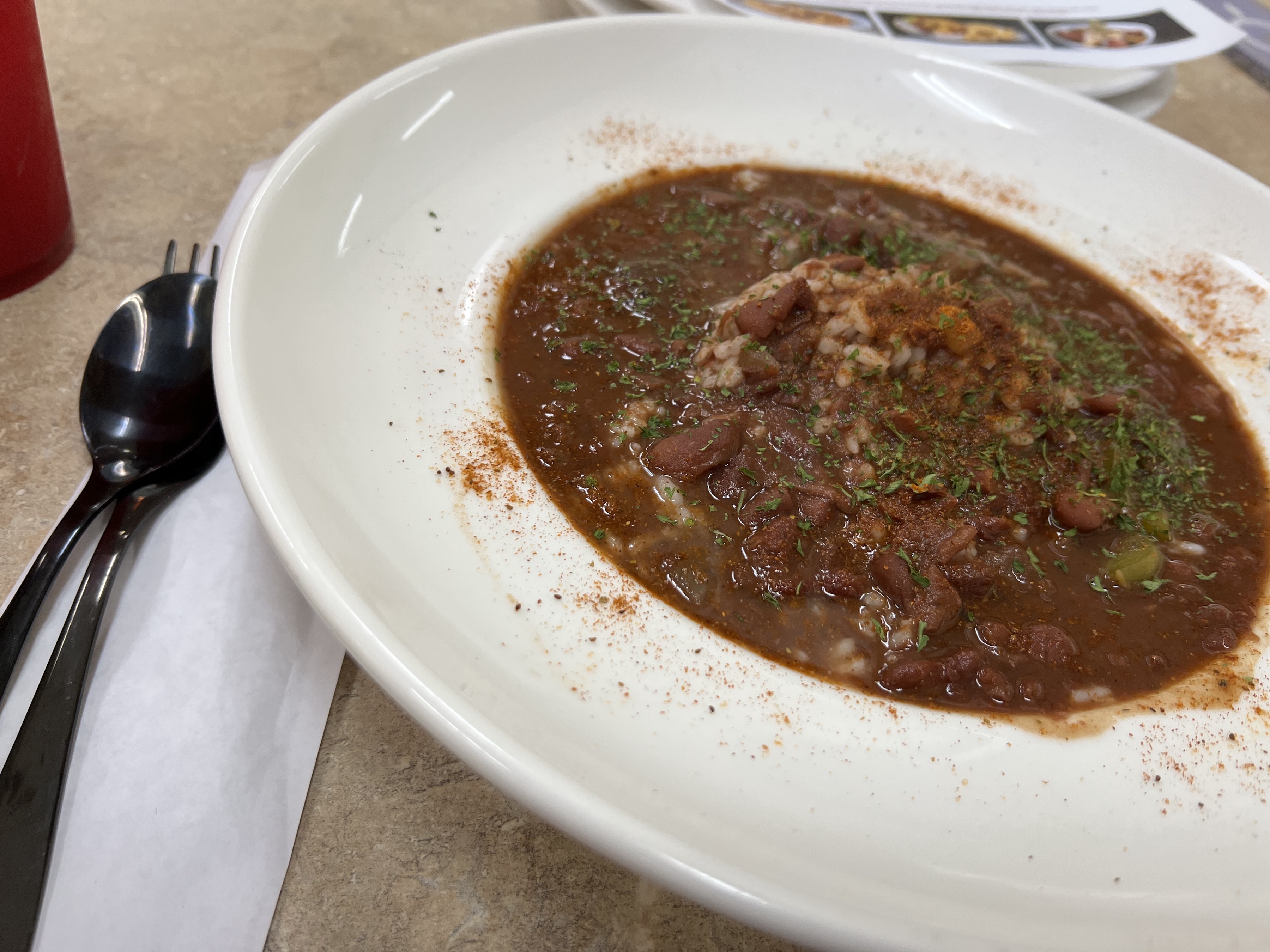 We made the mistake of starting out at the "narrow" end of the wedge-shaped Cajun Parmesan Crusted Salmon ($23.95) and got a big initial mouthful of SAP's seasoning mix, which wasn't quite spread evenly over the filet. Switching to the other end allowed us to enjoy the excellent taste of the olive oil, butter and honey broil; the promised grated parmesan, not entirely melted in the cooking process, was sort of desultory, mostly in the middle of the filet, and more of a garnish than a topping.

The salmon comes on a bed of pleasantly seasoned rice with side of choice — we picked the Red Beans & Rice ($4 a la carte), which according to the menu "does not include sausage"; we were also told verbally by the co-owner who waited on us not to expect it to have meat; nevertheless it contained bits of diced something and the something was meatlike. It's definitely different from the entree version.

We were full enough to have packed the substantial entree remainders into to-go boxes, but we allowed the co-owner to upsell us on dessert. The banana pudding ($4.99), as we have encountered elsewhere, has no bananas; at first guess, we'd say it's made with banana extract or banana flavoring, because it tasted like bananas, more or less. Unevenly distributed vanilla wafers line the bowl; crumbled wafers top the ample portion. And our wide wedge of sweet potato pie ($3.99), served warm, not chilled, was of a substantially different texture, more dense and earthy, than what we're used to. We're not sure if that's a New Orleans-style thing or just SAP's.

We recommend spending the $3.99 for SAP's strawberry punch. It was a little richer at lunch than at dinner, when it tasted just a bit watered down.

Some other options for future visits with their menu descriptions:

◼️ Algiers Yaki Mein ($11.95), "stewed shrimp and chicken sauteed in seasoning in garlic broth served on top of noodles, garnished with half a hard-boiled egg and chopped green onions." (New Orleans companion explained that this is a New Orleans adaptation of a dish brought home by Korean War veterans.)

A few of the side dishes also look to be worth exploring: Macaroni & Cheese ($4), Dirty Rice ($4) and, surprisingly a side item and not a main dish, Jambalaya ($4). And we will someday try for dessert the Fried Beignets (three for $5), "Original & Authentic with power [sic] sugar." (We have mentioned from time to time that folks who put menus together should probably consult a copy editor.)

And the checks at SAP's break down the sales tax burden into state (6.5%), city (2%), county (1%) and North Little Rock advertising and promotion (3%). That adds up to 12.5%, a reminder that around here we pay one of the highest sales taxes in the country on restaurant meals.

Print Headline: A taste of Louisiana