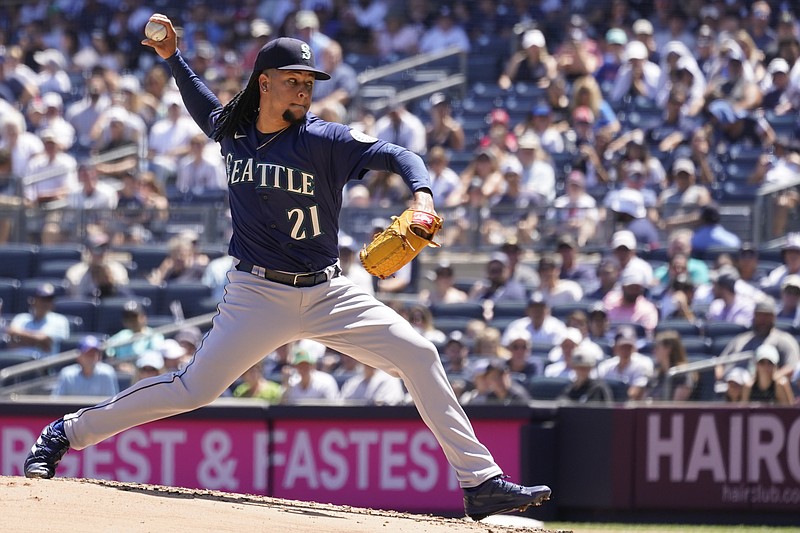 NEW YORK -- Luis Castillo pitched five-hit ball into the seventh inning in his Seattle debut, and the Mariners used a fast start to beat Gerrit Cole and the New York Yankees 7-3 on Wednesday.

"It was just another Luis Castillo start," said Winker, who played with the pitcher in Cincinnati. "He did great. First start here, I'm sure he was fired up and excited and he did his thing."

Castillo (5-4) struck out eight in 62/3 innings in his second start in the Bronx in less than a month. The right-hander allowed three runs and walked three.

"It was a little emotional ... but that did not distract me from my routine," Castillo said through a translator.

Castillo threw 109 pitches, 66 for strikes. He has struck out eight batters in each of his last four starts.

"Thought he was awesome," Seattle Manager Scott Servais said. "Couldn't be any more excited about what he's going to bring to our ballclub, the stability, taking the ball every fifth day and the confidence and the stuff."

The 29-year-old Castillo pitched seven sparkling innings for Cincinnati at New York on July 14. The Reds traded the ace to the Mariners on Friday night for four prospects.

The Yankees were reportedly in the mix for Castillo, but they acquired right-hander Frankie Montas in a trade with Oakland on Monday.

"They were one of the teams that was very interested in me, but I'm here with the Mariners now and just got to keep moving forward and now I'm here to take this team as far as I can," Castillo said.

Cole allowed 7 hits, struck out 8 and walked 1 in 6 innings.

ASTROS 6, RED SOX 1 Trey Mancini homered in his first start for Houston, and Jose Urquidy (10-4) struck out 10 in seven scoreless innings in a victory over Boston.

ATHLETICS 3, ANGELS 1 Sean Murphy hit a two-run home run and drove in all three of Oakland's run in a victory over Los Angeles.

TWINS 4, TIGERS 1 Jorge Lopez got his first save with his new team and newcomer Sandy Leon drove in two runs, leading Minnesota over Detroit.

PIRATES 8, BREWERS 7 Bryan Reynolds led off the bottom of the ninth inning with a home run to give Pittsburgh a victory over Milwaukee.