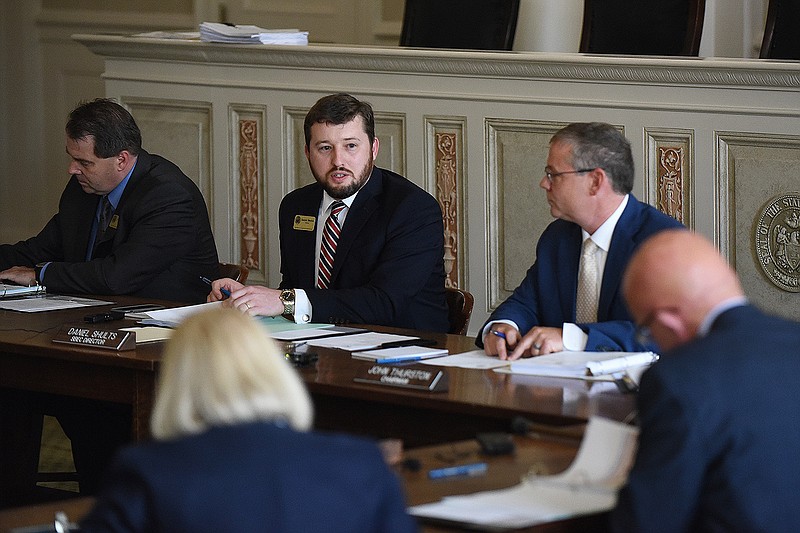 Director Daniel Shults (center) speaks during the Board of Election Commissioners meeting Wednesday at the state Capitol in Little Rock. (Arkansas Democrat-Gazette/Staci Vandagriff)

The state Board of Election Commissioners on Wednesday declined to certify the popular name and ballot title for a proposed constitutional amendment aimed at removing Pope County as a state-licensed casino site.

In a voice vote with no audible dissenters, the board approved a motion by commissioner Bilenda Harris-Ritter not to certify the ballot title for the Fair Play for Arkansas 2022 committee's proposed constitutional amendment because the ballot title doesn't refer to the existing casino license in Pope County and is misleading.

Commissioner Wendy Brandon said the board is charged with determining whether the proposed ballot measure's popular name and ballot title make it clear to voters what effect a yes or no vote will have on the future of casino gaming in Pope County.

"Unfortunately, I think this not referencing that license out there is a problem for this ballot title," she said.

Brandon said it's possible that voters could mistakenly think they are voting to stop casino gaming in Pope County by voting for the proposed constitutional amendment and that a casino could continue to operate in the county.

Commissioner James Harmon Harris III said taxpayers may want to know in the proposed amendment's ballot title that there is a current casino license in Pope County because there may have to be a significant amount of tax funds refunded back to the current casino license holder to make the license holder whole, in the event voters approved the proposed amendment.

"By ignoring this current license, I think that's a problem," he said.

The board's action came after the board heard about an hour of testimony from proponents and opponents of the proposed ballot measure's popular name and ballot title.

Dustin McDaniel, legal counsel for Cherokee Nation Businesses, said in a written statement that "We appreciate the thoughtful and diligent service of the Commissioners and agree with their decision to reject the popular name and ballot title submitted by Fair Play for Arkansas.

"We assume Fair Play will petition the Supreme Court to review this decision and we will intervene to assist the Attorney General's office in defending it," he said.

Act 376 of 2019 shifted the responsibility for certifying a proposed ballot measure's popular name and ballot title from the attorney general to the state Board of Election Commissioners.

Certification of a proposed ballot measure's popular name and ballot title is one of the two requirements under state law for a ballot proposal to get on the general election ballot. The other requirement is for the secretary of state to certify that the sponsor has submitted the required number of valid signatures of registered voters on petitions.

Nearly four weeks ago, the Fair Play for Arkansas 2022 committee said it turned in 103,096 signatures to the secretary of state's office.

As to whether the Fair Play for Arkansas 2022 committee turned in sufficient signatures to be on the Nov. 8 ballot or qualify for the 30-day cure period to collect more signatures, Kevin Niehaus, a spokesman for Secretary of State John Thurston, said late Wednesday afternoon that "We won't know for sure until [this] morning."

The licenses are authorized for expanding gambling operations at Oaklawn Racing and Gaming in Hot Springs and Southland Casino Racing in West Memphis and for casinos in Jefferson and Pope counties with the endorsement of local officials.

McDaniel, who is the state's former attorney general, on Wednesday asked the state Board of Election Commissioners to deny certification of the popular name and ballot title for the proposed constitutional amendment that is aimed at removing Pope County as a casino site, for several reasons.

The board must consider the fact that a Pope County casino license exists and that may impact the spending of billions of dollars in the future, he said.

But attorney Elizabeth Robben Murray, representing the Fair Play for Arkansas 2022 committee, told the board the ballot title is consistent with the guidance of the state Supreme Court.

The court doesn't delve into the effects of what might happen, she said, and the casino license in Pope County is currently the subject of litigation. 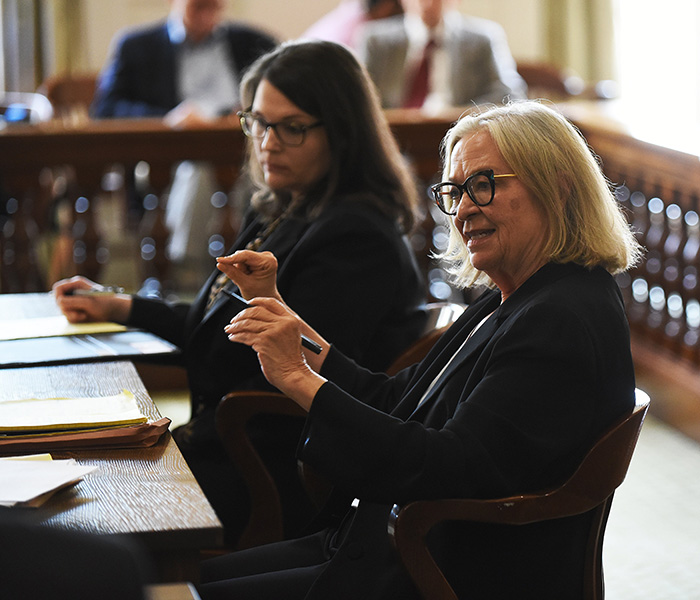 Attorney Elizabeth Robben Murray, representing the Fair Play for Arkansas 2022 committee, talks about the popular name and ballot title regarding casino gaming in Pope County during the Board of Election Commissioners meeting Wednesday at the State Capitol in Little Rock. (Arkansas Democrat-Gazette/Staci Vandagriff)