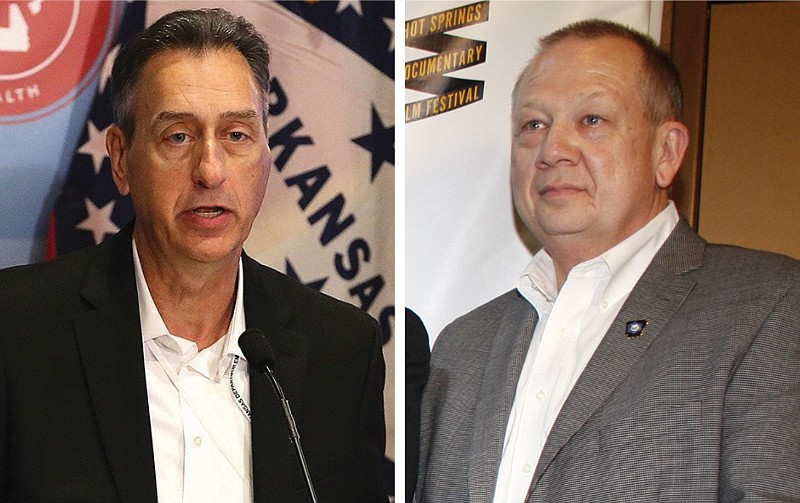 Jami Cook, secretary of the Arkansas Department of Public Safety and Director of the Commission on Law Enforcement Standards and Training, is set to resign at the end of the week, and Gov. Asa Hutchinson has split her role with the appointment of two officials.

A.J. Gary, current director of the Arkansas Department of Emergency Management, will take over Cook's duties as secretary, the governor announced Wednesday in a news release. J.R. Hankins, current Department of Public Safety chief of staff, will step into Cook's director position.

Cook announced her resignation July 21 citing health concerns. While her resignation came amid criticism regarding the death of Jonesboro police officer Vincent Parks, her staff has said Cook's resignation plans were in the works prior to the death.

Gary was appointed as the director of the Arkansas Department of Emergency Management by the governor in 2016 and State Homeland Security Advisor, the release said. He's worked in law enforcement and security preparedness for more than 36 years, which included serving as the Conway chief of police.

"A.J. Gary has managed some of the most difficult natural disasters in our state, and the value of his contributions cannot be overstated," Hutchinson said in the release. "The experience and skills that A.J. brings to this expanded role ensure that Arkansas's public safety agencies will continue their good service to Arkansas."

Gary said Wednesday that he is honored by the governor's appointment.

"We've worked together for six years now," Gary said. "We've gone through numerous disasters in the state, including river flooding and a global pandemic. We work together well."

Gary will continue as director of emergency management and as Homeland Security Advisor. He said those positions work hand in hand with law enforcement.

"I've worked with all these other divisions through the DPS transformation," Gary said. "They are a good team and will continue to move forward."

Hankins will continue his role as chief of staff for the Department of Public Safety. He was appointed to the role in 2019.

He retired from the Arkansas State Police in 2014 as a major and Highway Patrol Commander over the Eastern District of Arkansas. He returned the same year to become the state police "E-Crash" program manager, which helped establish and promote a new crash reporting system, the release said.

He started in law enforcement in 1974 at the Walnut Ridge Police Department. He also worked for the Lawrence County sheriff"s office before joining the Arkansas State Police in 1979.

Hankins said he has started reaching out to training directors around the state.

"I'm really excited about this," Hankins said Wednesday. "This is right in my wheelhouse. I'm very familiar with law enforcement."

The Commission on Law Enforcement Standards and Training has been in the news in recent days and received criticism from lawmakers after Parks died soon after arriving for training at the state academy July 17.

The Arkansas State Police said Monday a review into the death has been changed to a criminal investigation after police learned of facts "contrary" to original statements.

Lawmakers also have asked that someone from the commission testify before a Legislative Council meeting Aug. 19 regarding Parks' death.