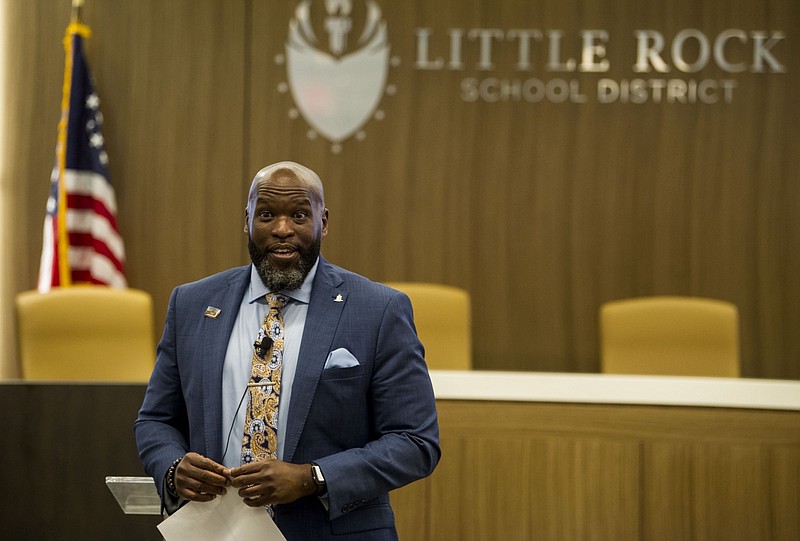 Little Rock School District Superintendent Jermall Wright answers questions from the public at a forum in the School District administration building in Little Rock in this April 18, 2022 file photo. Wright was still a candidate for the job when this photo was taken. (Arkansas Democrat-Gazette/Stephen Swofford)

Little Rock School Superintendent Jermall Wright is marking his one-month anniversary on the job by hosting four community sessions and asking the public to identify top priorities for the state's second-largest school system.

"What is working well" in the district? "What isn't working well?" and "What are the district's top three priorities?" are the questions Wright has posed on cards that were handed out to about 50 or more people who attended each session Monday and Tuesday in southwest and northwest parts of the city.

Those who don't make the community meetings can respond to the survey by using the QR code on the district's website or by emailing Wright at DrJermallWright@LRSD.org.

"We will be collecting this information from all four regional community meetings," Wright said Tuesday at an evening session at Pinnacle View Middle School. "This will help inform us to know what our community actually wants. I have ideas but, again, this isn't my school district, this is yours."

"Please don't take it lightly," Wright said about providing feedback. "I guarantee you it is going to be used," he said, adding that he anticipated reporting at some point to the School Board on the responses that are received and on how the information will be used.

The district has several strengths on which to build, Wright told the audiences. He cited partnerships with nonprofit organizations, improved public perception about the district, a wide variety of programs and paths for students and a wide variety of teacher training. He highlighted "phenomenal educators," "some of the best schools in the state," and "pockets of greatness," along with community schools and prekindergarten centers.

The district has "serious work to do," Wright said, to improve student achievement on state-required exams and the district's 80% graduation rate, which is even lower for some sub-populations of students.

The goal for achievement, at a minimum, must be meeting the state averages in the different academic subjects and grade levels, he said.

Improving the culture of the district is another area he wants to address, Wright said. That includes encouraging "authentic involvement of stakeholders" -- students, parents, educators and community members -- in decision-making. Improving the culture will also require the breakdown of "silos" or greater collaboration among departments in the district.

Reversing enrollment declines is another priority, Wright said. A shrinking enrollment can hurt student programs and teacher compensation, recruitment and retention, he said. The district's student count has dropped 3,043 in the 10 years since 2012-2013 when the enrollment was 25,097. Last school year's count of 22,054, however, did show an increase over the previous pandemic year count of 21,612, he said.

Wright was superintendent of the state-controlled Mississippi Achievement District -- made up of the Yazoo City and Humphries County schools -- before taking the Little Rock position on July 1. He said he gave 200% to the work in the state-controlled rural Mississippi system but he couldn't sustain that without more resources, which were not forthcoming.

A native of Jacksonville, Fla., Wright said he was part of a close knit family that fostered his self-confidence, competitiveness and work ethic to the point he was largely unaware of racial achievement gaps among the nation's youth until it was presented to him in his college course materials.

The divorced father of three said he started his career as a teacher and school administrator at a private Christian academy in his hometown. He eventually moved to leadership jobs in Washington, D.C.; Denver; and Philadelphia, and then the Montgomery and Birmingham, Ala., school systems. In those systems, he gravitated toward guiding low-achieving schools to greater student achievement that resulted in higher accountability ratings.

Wright introduced the audience on Tuesday to Melissa Gude who is the district's new chief academic officer and who first worked with Wright in Philadelphia.

The new superintendent took a small number of questions from the audience Tuesday. Asked if he had worked in the past with teacher unions, Wright replied affirmatively.

"I've always had great relationships with everybody," said Wright who was a relaxed, jovial speaker in the community sessions.

"The adults in our schools are actually doing the work," he elaborated. "You can't just say you are making decisions that are in the best interest of kids without making sure that the needs of the adults in the building are met. Don't compromise what is best for kids. Both can exist simultaneously."

"I feel like these questions are getting dangerous so I'm going to cut them off," he said to laughter at the end of the session.