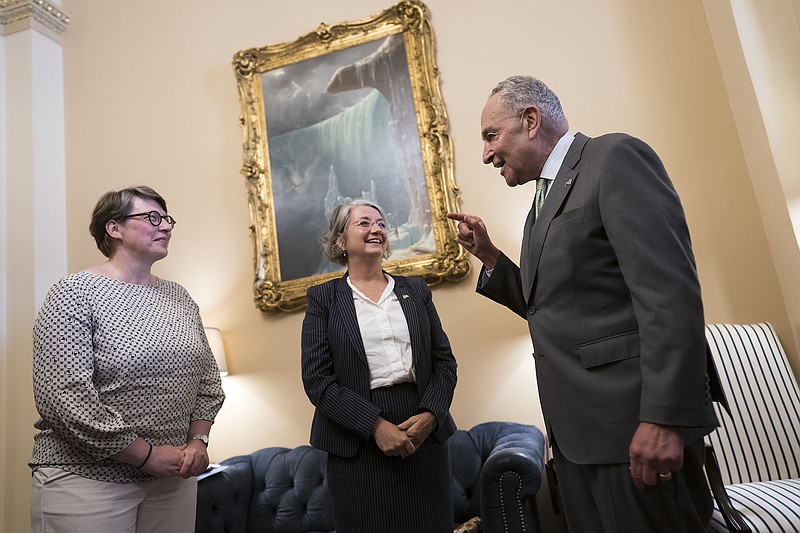 Senate Majority Leader Charles Schumer on Wednesday welcomes Paivi Nevala (left), minister counselor of the Finnish Embassy, and Karin Olofsdotter, Sweden’s ambassador to the United States, just before the Senate vote to ratify NATO membership for the two nations. Schumer had invited the diplomats to the Senate chamber to watch the vote. (AP/J. Scott Applewhite)

WASHINGTON -- U.S. Senators delivered overwhelming bipartisan approval to NATO membership for Finland and Sweden on Wednesday, calling expansion of the Western defensive bloc a "slam-dunk" for U.S. national security and a day of reckoning for Russian President Vladimir Putin over his invasion of Ukraine.

Wednesday's 95-1 vote -- for the candidacy of two Western European nations that, until Russia's war against Ukraine, had long avoided military alliances -- took a crucial step toward expansion of the North Atlantic Treaty Organization and its 73-year-old pact of mutual defense among the United States and democratic allies in Europe.

Senate Majority Leader Charles Schumer invited ambassadors of the two nations to the chamber gallery to witness the vote.

President Joe Biden, who has been the principal player rallying global economic and material support for Ukraine, has sought quick entry for the two previously non-militarily aligned northern European nations.

"This historic vote sends an important signal of the sustained, bipartisan U.S. commitment to NATO, and to ensuring our Alliance is prepared to meet the challenges of today and tomorrow," Biden said in a statement Wednesday evening.

"I look forward to signing the accession protocols and welcoming Sweden and Finland, two strong democracies with highly capable militaries, into the greatest defensive alliance in history," the president added.

Approval from all member nations -- currently, 30 -- is required. The candidacies of the two prosperous Northern European nations have won ratification from more than half of the NATO member nations in the roughly three months since the two applied. It's a purposely rapid pace meant to send a message to Russia over its six-month-old war against Ukraine's West-looking government.

"It sends a warning shot to tyrants around the world who believe free democracies are just up for grabs," Sen. Amy Klobuchar, D-Minn., said in the Senate debate ahead of the vote.

"Russia's unprovoked invasion has changed the way we think about world security," she added.

The vote came a day after Republicans in the House rallied around Speaker Nancy Pelosi, D-Calif. -- one of their most bitter political adversaries -- for defying the Chinese government's warnings and traveling to Taiwan. That support, and the resounding vote on Wednesday, were a stark contrast to the pitched battles Republicans have engaged in with Democrats on domestic policy.

It also marked the success of a concerted effort by Senate Minority Leader Mitch McConnell of Kentucky, who has long pushed against the anti-interventionist strain in his party, but in recent months launched a particularly aggressive effort to publicly rally support for the kind of assertive military presence abroad that was once viewed as Republican orthodoxy.

McConnell argued that both Sweden and Finland would be able to carry their share of the defense burden, in an attempt to counter a concern frequently raised by conservatives about adding to the alliance. And he had made the case to his members that "even closer cooperation" with the two nations would help the United States counter China, another argument invoked by Republicans contending that the U.S. needs to shift its defense resources away from Europe and toward Asia.

McConnell, who visited Kyiv earlier this year, urged unanimous approval. Speaking to the Senate, McConnell cited Finland's and Sweden's well-funded, modernizing militaries and their experience working with U.S. forces and weapons systems, calling it a "slam-dunk for national security" of the United States.

"Their accession will make NATO stronger and America more secure. If any senator is looking for a defensible excuse to vote no, I wish them good luck," McConnell said.

Sen. Josh Hawley, a Missouri Republican who often aligns his positions with those of the most ardent supporters of former President Donald Trump, cast the only no vote. Hawley took the Senate floor to call European security alliances a distraction from what he called the United States' chief rival -- China, not Russia.

"We can do more in Europe ... devote more resources, more firepower ... or do what we need to do to deter Asia and China. We cannot do both," Hawley said, calling his a "classic nationalist approach" to foreign policy.

Sen. Tom Cotton of Arkansas, like Hawley a potential 2024 presidential contender, rebutted his points without naming his potential Republican rival.

That included arguing against Hawley's contention a bigger NATO would mean more obligations for the U.S. military, the world's largest. Cotton was one of many citing the two nations' military strengths -- including Finland's experience securing its hundreds of miles of border with Russia and its well-trained ground forces, and Sweden's well-equipped navy and air force.

"Let's be honest, who can deny the much stronger cases for Finland and Sweden?" Cotton said, arguing that those countries were "far larger, far more capable and far more strategically situated."

They're "two of the strongest members of the alliance the minute they join," Cotton said.

U.S. State and Defense officials consider the two countries net "security providers," strengthening NATO's defense posture in the Baltics in particular. Finland is expected to exceed NATO's 2% GDP defense spending target in 2022, and Sweden has committed to meet the 2% goal.

That's in contrast to many of NATO's newcomers formerly from the orbit of the Soviet Union, many with smaller militaries and economies. North Macedonia, NATO's most recent newcomer nation, brought an active military of just 8,000 personnel when it joined in 2020.

Senators' votes approving NATO candidacies often are lopsided -- the one for North Macedonia was 91-2. But Wednesday's approval from nearly all senators present carried added foreign policy weight in light of Russia's war.

Schumer, D-N.Y., said he and McConnell had committed to the country's leaders that the Senate would approve the ratification resolution "as fast as we could" to bolster the alliance "in light of recent Russian aggression."

Sweden and Finland applied in May, setting aside their longstanding stance of military nonalignment. It was a major shift of security arrangements for the two countries after neighboring Russia launched its war on Ukraine in late February. Biden encouraged their joining and welcomed the two countries' government heads to the White House in May, standing side by side with them in a display of U.S. backing.

The U.S. and its European allies have rallied with newfound partnership in the face of Putin's military invasion, as well as the Russian leader's sweeping statements this year condemning NATO, issuing veiled reminders of Russia's nuclear arsenal and asserting Russia's historical claims to territory of many of its neighbors.

"Enlarging NATO is exactly the opposite of what Putin envisioned when he ordered his tanks to invade Ukraine," Sen. Bob Menendez, a New Jersey Democrat and chairman of the Senate Foreign Relations Committee, said Wednesday, adding that the West could not allow Russia to "launch invasions of countries."

Wednesday's vote by Republicans and Democrats stood out for the normally slow-moving and divided chamber. Senators voted down a proposed amendment by Sen. Rand Paul, R-Ky., intended to ensure that NATO's guarantee to defend its members does not replace a formal role for Congress in authorizing the use of military force. Paul, a longtime advocate of keeping the U.S. out of most military action abroad, voted "present" on the ratification of Sweden and Finland's membership bid.

Senators approved another amendment from Sen. Dan Sullivan, R-Alaska, declaring that all NATO members should spend a minimum of 2% of their gross domestic product on defense and 20% of their defense budgets on major equipment, including research and development.

Each member government in NATO must give its approval for any new member to join. The process ran into unexpected trouble when Turkey raised concerns over adding Sweden and Finland, accusing the two of being soft on banned Turkish Kurdish exile groups. Turkey's objections still threaten the two countries' membership.

Information for this article was contributed by Ellen Knickmeyer and Lisa Mascaro of The Associated Press, Catie Edmondson of The New York Times and Karoun Demirjian of The Washington Post. 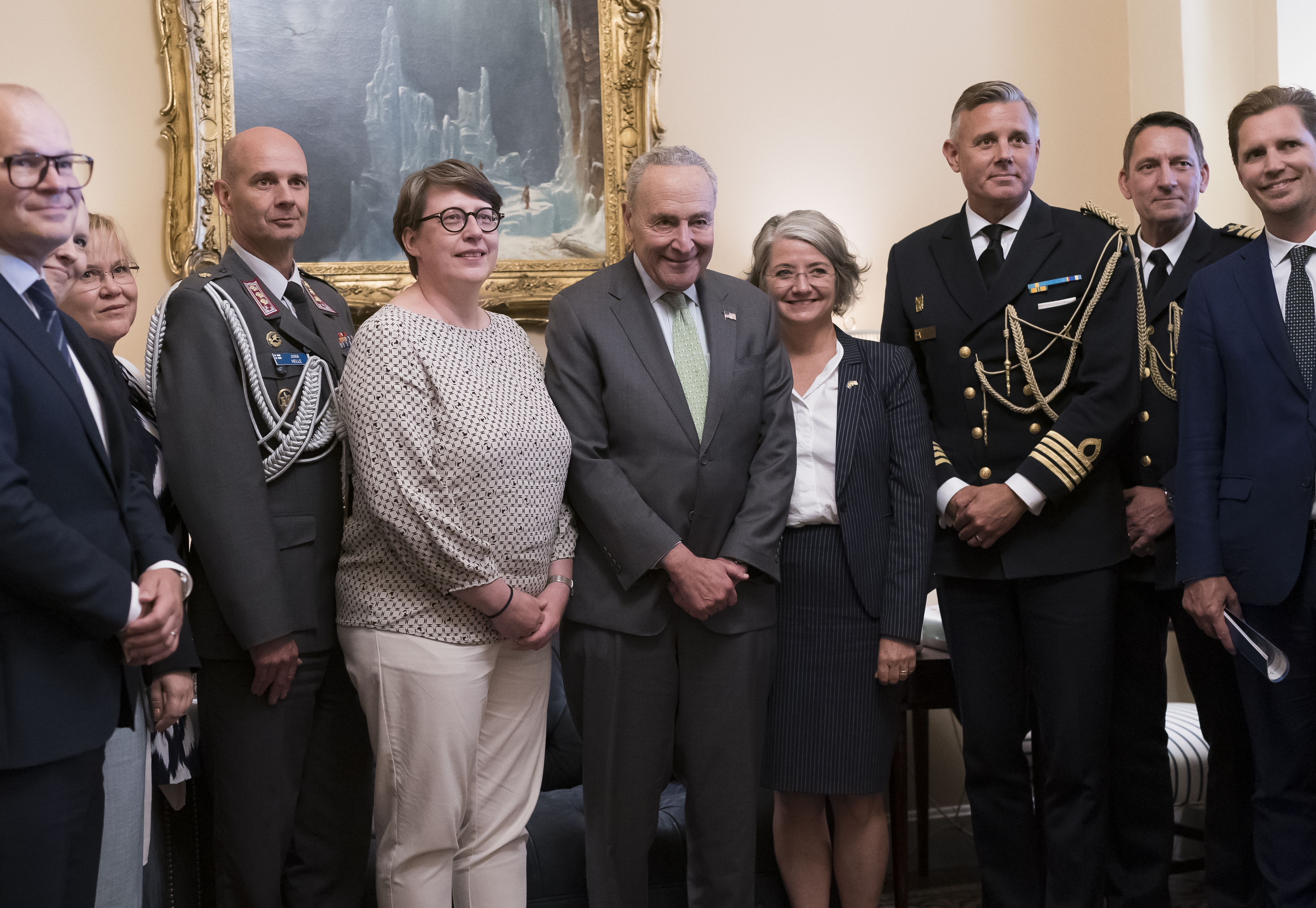 Senate Majority Leader Chuck Schumer, D-N.Y., center, is flanked by Paivi Nevala, minister counselor of the Finnish Embassy, left, and Karin Olofsdotter, Sweden's ambassador to the U.S., as he welcomes diplomats just before the Senate vote to ratify NATO membership for the two nations in response to Russia's invasion of Ukraine, at the Capitol in Washington, Wednesday, Aug. 3, 2022. (AP Photo/J. Scott Applewhite)