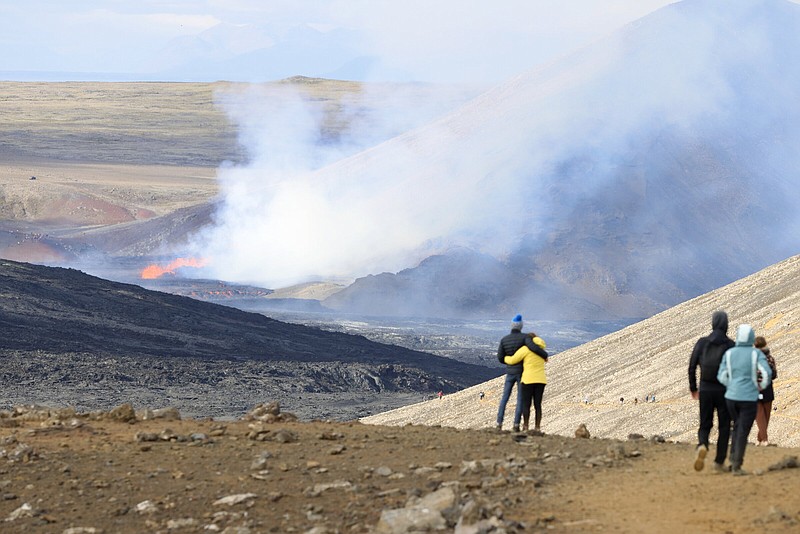 People look at the activity on Fagradalsfjall volcano in Iceland on Wednesday, which is located 20 miles southwest of the capital of Reykjavik and close to the international Keflavik Airport. (AP/Brynjar Gunnarsson)

The Icelandic Meteorological Office urged people not to go near the Fagradalsfjall volcano, which is located 20 miles southwest of the capital, Reykjavik.

The eruption in an uninhabited valley is not far from Keflavik Airport, Iceland's international air traffic hub. The airport remained open and no flights were disrupted.

A live video feed from the site showed magma spewing from a narrow fissure about 110 to 220 yards long over a field of lava from last year's eruption, the first on the Reykjanes Peninsula in almost 800 years.

Scientists had anticipated an eruption somewhere on the peninsula after a series of earthquakes over the past week indicated volcanic activity close to the crust.

Volcanologist Magnus Tumi Gudmundsson told The Associated Press that the eruption appeared to be small.

"But we don't know where in the process things are at," he said.

The 2021 eruption in the same area produced spectacular lava flows for several months. Hundreds of thousands of people flocked to see the spectacular sight.

TEHRAN, Iran -- Iran, the United States and the European Union said Wednesday they would send senior representatives to Vienna amid what appears to be a last-ditch effort at reviving talks over Tehran's tattered 2015 nuclear deal with world powers.

It wasn't immediately clear if all other parties to the accord would attend the surprise summit, nor if there had been any progress after a monthslong stalemate and recent fruitless round of indirect talks between Iran and the U.S. in Doha.

The European Union official who chairs the talks, Enrique Mora, said the negotiations would focus on the most recent draft to restore the agreement, while Iran's chief nuclear negotiator, Ali Bagheri Kani, said he was heading to the Austrian capital "to advance the negotiations."

U.S. Special Representative for Iran Rob Malley wrote on Twitter that he was preparing to travel to Vienna for talks. He cautioned that American "expectations are in check" ahead of the negotiations.

The German Foreign Ministry said Berlin would be represented at an "expert level" at the talks in Vienna, adding it supported efforts to fully revive the deal "even if hopes are very small." It again pushed Iran to conclude the deal and said that would mean "giving up maximalist positions in areas beyond" the nuclear agreement.

Russia's chief representative at the talks, Mikhail Ulyanov, also wrote on Twitter that negotiators from Russia, a key signatory of the nuclear deal, "stand ready for constructive talks in order to finalize the agreement."

BEIJING -- Police in southern China are searching for a man who is believed to have killed three people and injured six at a kindergarten in the country's southern province of Jiangxi on Wednesday.

The 48-year-old suspect was identified by his surname Liu in a police statement. No further details of the Wednesday morning attack in the province's Anfu County were given in the brief statement.

China upgraded security at schools after a spate of of deadly attacks in recent years attributed largely to people bearing grudges against society or who had unidentified mental illnesses.

China does not allow private gun ownership, so most such attacks are carried out with knives, homemade explosives or gasoline bombs. About 100 children and adults have been killed and hundreds injured over the past decade in apparently uncoordinated, "lone wolf" attacks in which the motive was unclear and the overwhelmingly male assailants were either killed, ended their lives or were put on trial and executed.

Acts of violence against China's children resonate especially strongly because of the country's chronically low birth rate, partly a result of decades of population control policies.

WASHINGTON -- The Biden administration on Tuesday approved two major arms sales to Saudi Arabia and the United Arab Emirates to help them defend against Iran.

The more than $5 billion in missile defense and related sales come after President Joe Biden's visit to the Middle East last month, during which he met with numerous regional leaders in Saudi Arabia. Both Saudi Arabia and the UAE have been hit in recent months with rocket attacks from the Iran-backed Houthi rebel movement in Yemen.

Although Tuesday's approvals are for defensive weapons, they may be questioned by lawmakers who had supported Biden's decision last year to cut Saudi Arabia and the UAE off from major purchases of offensive U.S. arms because of their involvement in the war in Yemen.

The new sales include $3 billion for Patriot missiles for Saudi Arabia specifically designed to protect itself from rocket attacks by the Houthis, and $2.2 billion for high-altitude missile defense for the UAE. 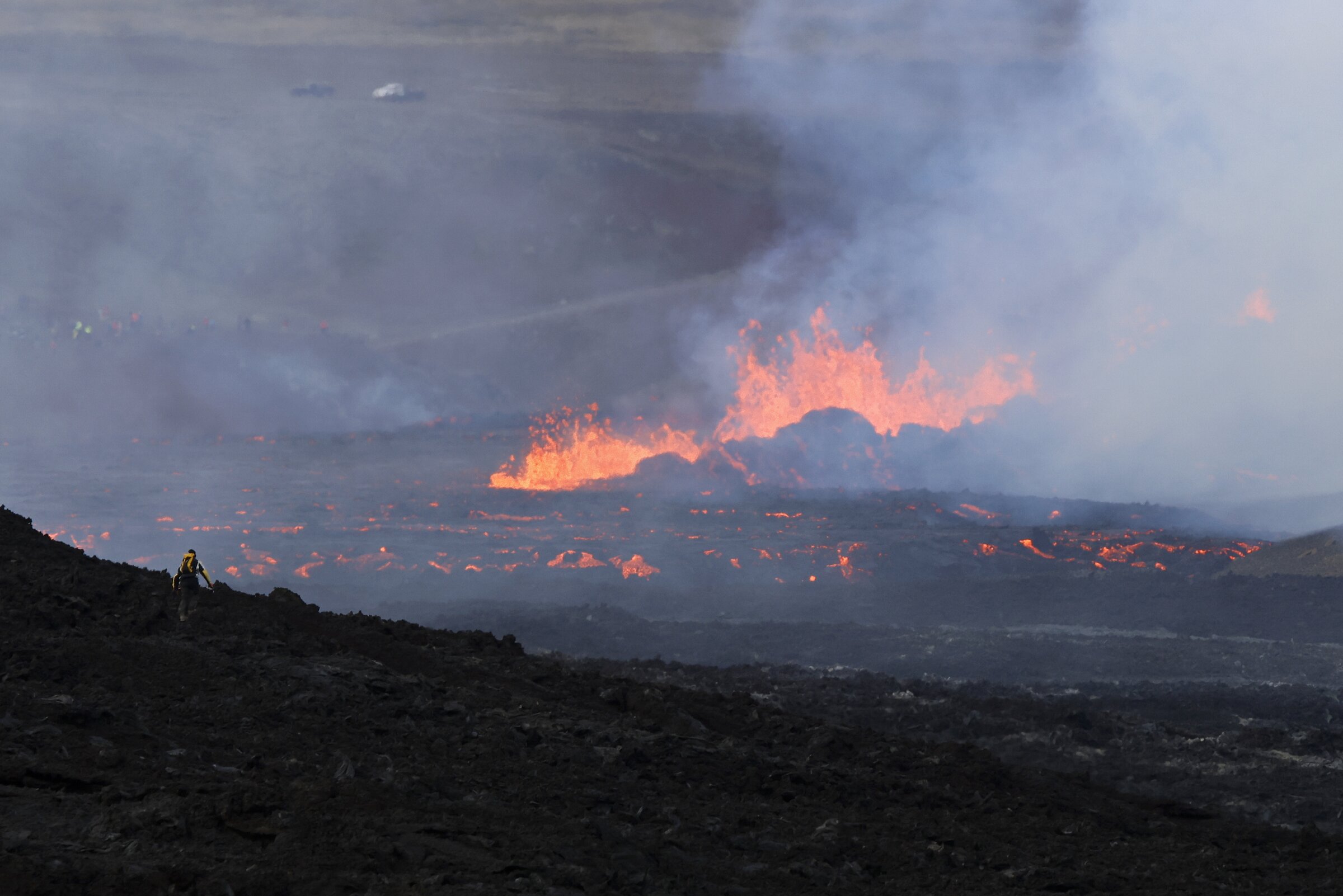 A hiker (lower left) angles for a view of lava spewing from a fissure Wednesday at the Fagradalsfjall volcano in southwest Iceland. The volcano, about 20 miles from the capital, Reykjavik, erupted Wednesday about eight months after its last eruption, which produced spectacular lava flows for several months. More photos at arkansasonline.com/84iceland/. (AP/Brynjar Gunnarsson)