OPINION | REVIEW: ‘Bullet Train’ as fast-paced and hectic a ride as it sounds 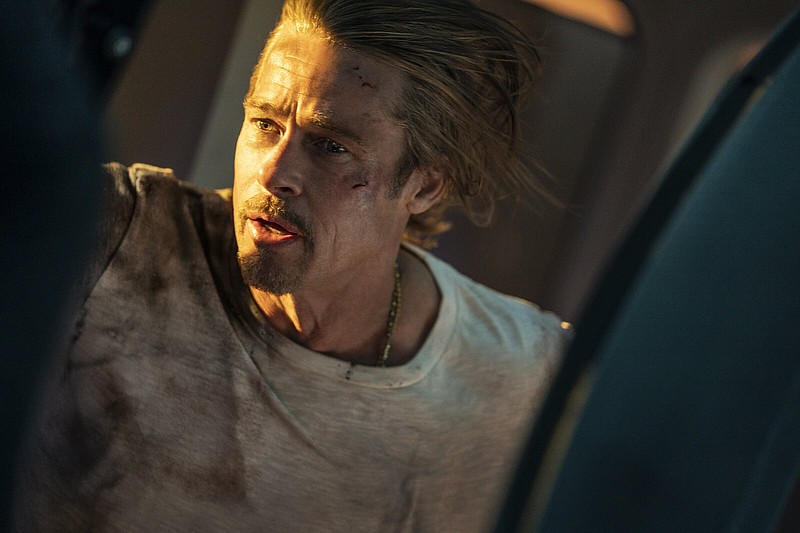 Self-described “chump of an assassin” Ladybug (Brad Pitt) finds himself stuck on a train rife with his ilk, all looking to to separate him from a particularly valuable metal briefcase.

Sometimes, a movie, like the rest of us, just wants to have fun. It's like you're in high school and your folks are out of town, and you know if you can convince a couple of really cool, fun people to come over, then everyone else will want to join in, and you can have one of those legendary parties where everyone has a blast, and that's all people talk about at your high school reunion 20 years later. This movie works a bit like that, only instead of "fun people" it employs what seems to be half of 21st-century Hollywood royalty to get there, and it's more than likely few will remember it two decades hence.

David Leitch's madcap, bloody, assassins-on-a-train caper "Bullet Train" moves much as its title suggests, flying down a monorail track at a breathless pace, only occasionally stopping at a platform for a minute to get the dead bodies removed, and new partygoers brought in. This weirdly works as a metaphor, and in actuality, as the action almost entirely takes place within the tight -- though impressively modern -- confines of a Japanese high-speed train headed from Tokyo to Kyoto.

On said train, we have a recently returned assassin, given the code name Ladybug (Brad Pitt), as a last minute fill in for another operative who called in sick. His mission, given to him via his handler (whose identity I won't spoil) over the course of an extended phone call as he moves from the station in Tokyo onto the train, is to snatch a metal briefcase from a passenger, and, having retrieved it, make his way to the platform on the next stop for extraction.

It sounds simple enough, which suits Ladybug, who has recently gone through extensive therapy and doesn't really want to hurt people anymore, perfectly well. We don't know much about his past exploits, other than being part of some gruesome campaigns in other countries, including a particularly bloody one in Bolivia where he was inadvertently working with a pair of self-proclaimed "brothers" known as Tangerine (Aaron Taylor-Johnson), and Lemon (Brian Tyree Henry), both of whom happen to be here on this train, as the holders of the metal briefcase in question. They are here, in turn, to protect the briefcase, which we come to find is filled with a great deal of cash, while returning The Son (Logan Lerman), a wayward screw-up, to his father, the most fearsome gangster in Japan, a Russian brute known only as the White Death (Michael Shannon).

Of course, that's not all. Also on board, a Mexican hitman known as the Wolf (Bad Bunny), looking to avenge the poisoning murder of his bride, along with the entire wedding party that accompanied her; an assassin who, not coincidentally, specializes in poison, known as the Hornet (Zazie Beetz); Kimura (Andrew Koji), the lead assassin for the White Death, looking for the person who shoved his young son off the roof of a shopping mall; and the diminutive Prince (Joey King), a pint-sized mastermind, who looks about 16, dresses like an affluent schoolgirl, and uses that veneer of innocence to her great advantage. Oh, and also, a stolen boomslang, one of the deadliest snakes in the world, accidentally released by Ladybug in trying to create a makeshift barricade out of passengers' suitcases.

As the train speeds on, all these wacky killers look to take each other out in the name of this briefcase, or vengeance, or a myriad of other vague reasons. Ladybug, for his part, tries to be mindful of his new outlook on life ("Any potential conflict is an opportunity for growth"), and negotiate his way out of the carnage all around him, but due to his self-described perpetually awful luck, it still finds him plenty. Much is made of the idea of luck and fate: For all Ladybug's suffering, Prince claims to have always benefited from the gods of chance, while the father of Kimura, known as "The Elder" (Hiroyuki Sanada), sees in this situation a chance for his path to reach its natural conclusion in final conflict with his former adversary, White Death (Shannon).

Based on the equally gonzo novel by Kotaro Isaka, Leitch's film briskly takes us from one bloody episode to another, in various inventive ways. Known primarily for his work on the John Wick franchise, and "Atomic Blonde," he certainly knows his way around (and often through) a brutal beat down scene, but here, he's going for a distinctly different vibe than the ultra-visceral style he perfected before.

Instead of realistic, close-quartered combat steeped in pain, there's a far more cartoonish element at work, enabling characters such as Ladybug to endure a series of increasingly violent onslaughts, with weapons ranging from guns and knives, to stuffed animals and bottles of carbonated water. The body count is plenty high, and the bloodletting frequent, but the tone is jovial, almost conspiratorial. The film gives us plenty of mayhem, but doesn't want us to worry about it terribly much (when social scientists examine our culture from a remote moon outpost generations from now, they might suggest a link between our choice of entertainments, and our acute desensitization to violence).

Comic brutality is naturally one of Pitt's specialties, combining his charisma and boyish charm with his significant physicality, and Leitch has populated his film with many other like-minded actors, either as principals or in small cameos (with the likes of Channing Tatum and Ryan Reynolds falling into the latter category), all of which gives the movie a kind of all-star glow. It's a film that feels like just about everyone is somebody, which can either be distracting, in a drama, or goofy fun, in a comedy such as this.

At times the screenplay, by Zak Olkewicz, plays a bit too glib: An on-the-nose Quentin Tarantino homage, with reckless time jumps forward and backward and self-conscious interplay between characters, one of whom bases his entire world philosophy on the collected works of "Thomas the Tank Engine." There are also the obvious bits having to do with Ladybug's newfound emotional harmony (he speaks in endless aphorisms and dispenses psychological advice to his adversaries, even as he's beating them to a pulp), that gets significantly overplayed, but fortunately, Pitt's engaging magnetism, along with the rest of the bouncy cast, is enough to grease the wheels just enough as the movie's consistent, propulsive energy carries us forward until it feels almost curmudgeonly to resist the film's entreaties to enjoy oneself. 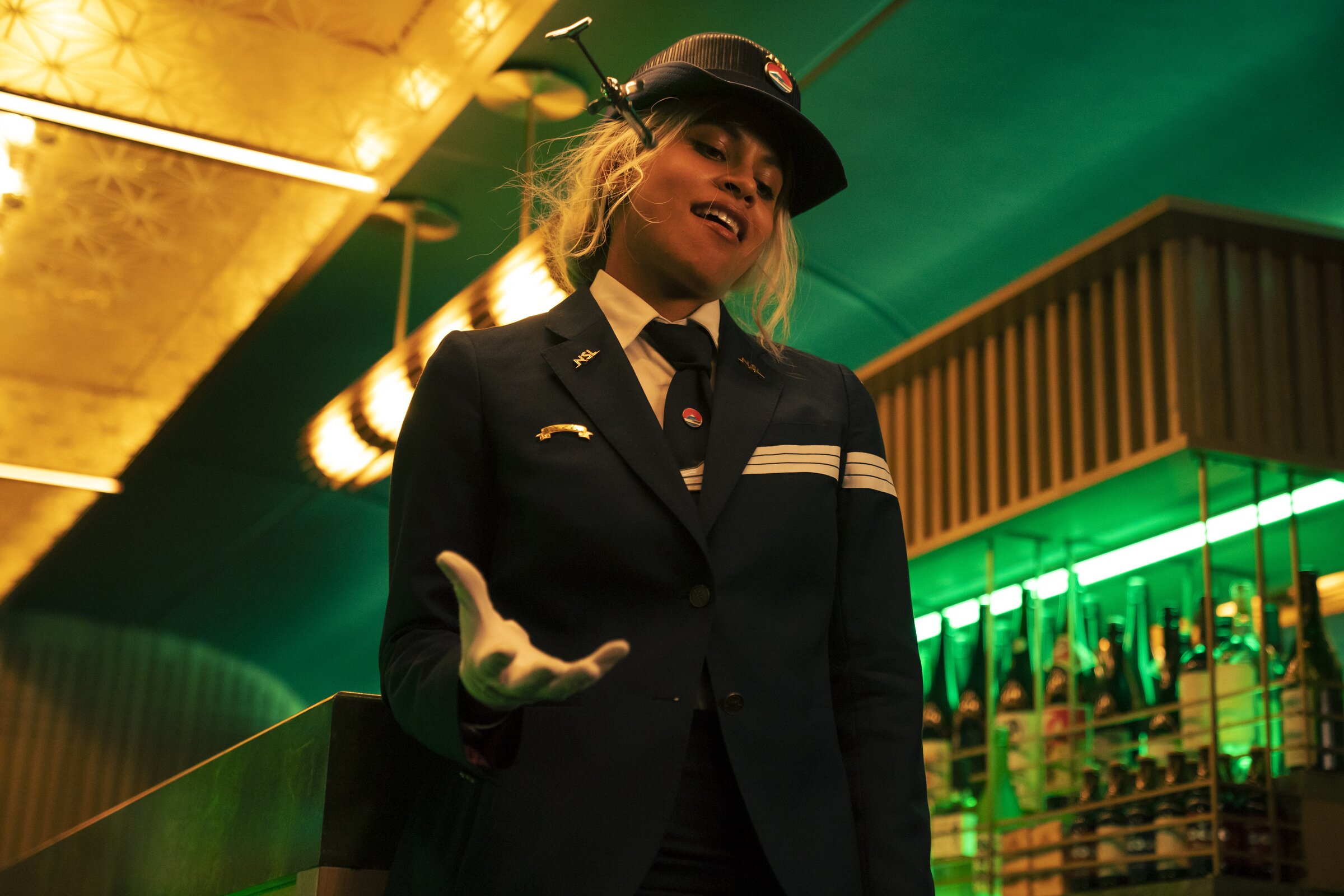 Print Headline: Burning up the track