Move frees up money to tackle virus by Compiled by Democrat-Gazette staff from wire reports | August 5, 2022 at 4:22 a.m. 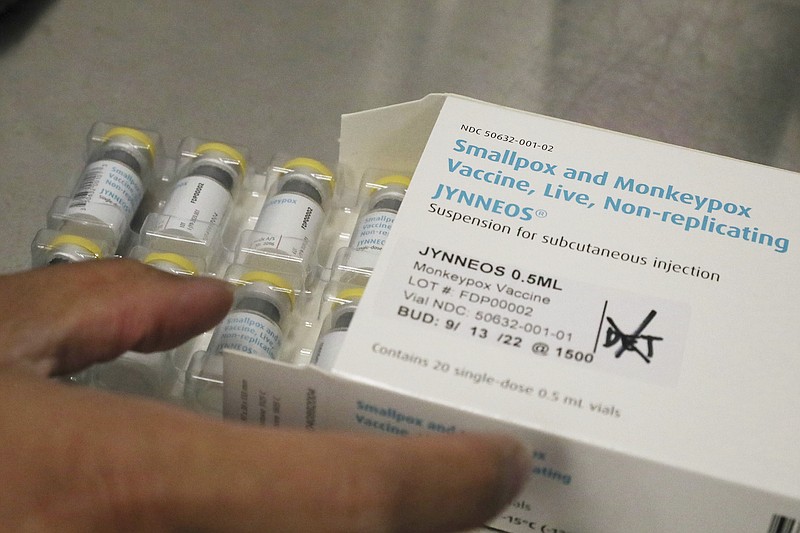 FILE - Jonathan Parducho, a pharmacist, removes a tray of vials of of the Jynneos vaccine for monkeypox from a box containing 20 doses, in the vaccine hub at Zuckerberg San Francisco General Hospital, July 29, 2022, in San Francisco. The U.S. will declare a public health emergency to bolster the federal response to the outbreak of monkeypox that already has infected more than 6,600 Americans. That's according to two people familiar with the matter said. (Lea Suzuki/San Francisco Chronicle via AP)

WASHINGTON -- The federal government declared a public health emergency Thursday to bolster the response to the monkeypox outbreak that has infected more than 6,600 Americans.

The announcement will free up money and other resources to fight the virus, which may cause fever, body aches, chills, fatigue and pimple-like bumps on many parts of the body.

"We are prepared to take our response to the next level in addressing this virus, and we urge every American to take monkeypox seriously," said Xavier Becerra, head of the Department of Health and Human Services.

The declaration by the department comes as the Biden administration has faced criticism over monkeypox vaccine availability. Clinics in major cities such as New York and San Francisco say they haven't received enough of the two-shot vaccine to meet demand, and some have had to stop offering the second dose to ensure supply of first doses.

The White House said it has made more than 1.1 million doses available and has helped to boost domestic diagnostic capacity to 80,000 tests per week.

The monkeypox virus spreads through prolonged skin-to-skin contact, including hugging, cuddling and kissing, as well as sharing bedding, towels and clothing. The people who have gotten sick so far have been primarily men who have sex with men. But health officials emphasize that the virus can infect anyone.

No one in the United States has died. A few deaths have been reported in other countries.

Earlier this week, the Biden administration named top officials from the Federal Emergency Management Agency and the Centers for Disease Control and Prevention to serve as the White House coordinators to combat monkeypox.

"It signals the U.S. government's seriousness and purpose, and sounds a global alarm," he said.

Under the declaration, the Department of Health and Human Services can draw from emergency funds, hire or reassign staff to deal with the outbreak and take other steps to control the virus.

For example, the announcement should help the federal government to seek more information from state and local health officials about who is becoming infected and who is being vaccinated. That information can be used to better understand how the outbreak is unfolding and how well the vaccine works.

Gostin said the U.S. government has been too cautious and should have declared a nationwide emergency earlier. Public health measures to control outbreaks have increasingly faced legal challenges in recent years, but Gostin didn't expect that to happen with monkeypox.

"It is a textbook case of a public health emergency," Gostin said. "It's not a red or a blue state issue. There is no political opposition to fighting monkeypox."

A public health emergency can be extended, similar to what happened during the covid-19 pandemic, he noted.

The urgency in the current response stems from the rapid spread of the virus coupled with the limited availability of the two-dose vaccine called Jynneos, which is considered the main medical weapon against the disease.

The doses, given 28 days apart, are currently being given to people soon after they think they were exposed, as a measure to prevent symptoms.

Becerra announced the emergency declaration during a call with reporters. During the call, Food and Drug Administration Commissioner Robert Califf said regulators are reviewing an approach that would stretch supplies by allowing health professionals to vaccinate up to five people -- instead of one -- with each vial of Jynneos.

Under this so-called dose-sparing approach, physicians and others would use a shallower injection under the skin, instead of the subcutaneous injection currently recommended in the vaccine's labeling.

Califf said a decision authorizing that approach could come "within days."

That would require another declaration, to allow the government to alter its guidelines on how to administer the vaccine, officials said.

Health officials pointed to a study published in 2015 that found that Jynneos vaccine administered that way was as effective at stimulating the immune system as when the needle plunges deeper into other tissue.

But experts also have acknowledged they are still gathering information on how well the conventional administration of one or two full doses works against the outbreak.

Others health organizations have made declarations similar to the one issued by the Department of Health and Human Services.

Last week, the World Health Organization called monkeypox a public health emergency, with cases in more than 70 countries. A global emergency is WHO's highest level of alert, but the designation does not necessarily mean a disease is particularly transmissible or lethal.

California, Illinois and New York have all made declarations in the past week, as have New York City, San Francisco and San Diego County.

The declaration of a national public health emergency and the naming of a monkeypox czar are "symbolic actions," said Gregg Gonsalves, a Yale University infectious diseases expert.

What's important is that the government is taking the necessary steps to control the outbreak and -- if it comes to that -- to have a plan for how to deal with monkeypox if it becomes endemic, he said.

WHO Director General Tedros Adhanom Ghebreyesus in a news conference last week said the outbreak could be stopped by a collective effort of government and individuals. He said men who have sex with men should consider reducing their number of sexual partners, avoiding new ones, and exchanging contact information to allow for contact tracing and post-exposure vaccination.

WHO officials said asking for temporary changes in sexual behavior is a modest step many gay men are already taking.

"It makes common sense: A reduced number of contacts equals a reduced risk of exposure," said Andy Seale, a WHO adviser on HIV, hepatitis and sexually transmitted infections. "It's really about sharing whatever data we get in a stigma-free, moral-free, not-making-any-judgments manner so individuals have access to the data and understand what we are seeing."

Demetre Daskalakis, a top CDC official leading the U.S. monkeypox response, said at a meeting of HIV organizations this week that "it's a good plan" to consider limiting partners, stressing that "this is not a forever thing, it's a for now thing" until vaccinations are more widely available. He said the agency is revising its monkeypox guidance for safer sex, which currently tells only people with symptoms to avoid sex.

In New York City, a top epidemiologist at the health department has publicly criticized agency leadership for not urging men who have sex with men to abstain from anonymous sex for several weeks. Don Weiss, director of surveillance for the agency's Bureau of Communicable Disease, also blasted the health department for issuing a news release in July advising people who choose to have sex while sick with monkeypox to avoid kissing and to cover their sores; Weiss said taking those steps does not prevent infected people from transmitting the virus.

He continued to press his case with colleagues over the coming weeks.

"This disease is entirely preventable had we the courage to send out prevention messages," Weiss wrote in a June 22 email. "We seem paralyzed by the fear of stigmatizing this disease while we totally ignore the epidemiology. If we had an outbreak associated with bowling, would we not warn people to stop bowling?"

Weiss, who declined to be interviewed, posted a letter from the agency on his website showing he was reassigned after his criticisms.

Patrick Gallahue, a spokesman for the health department, declined to comment on Weiss' reassignment, but pushed back against his call for temporary abstinence.

"For decades, the LGBTQ+ community has had their sex lives dissected, prescribed, and proscribed in myriad ways, mostly by heterosexual and cis people," Gallahue said in a written statement. "Our guidance and advice are grounded in science and history -- including the scientific reviews of how poorly abstinence-only guidance has historically performed in preventing transmission of STIs -- with this disgraceful legacy in mind."

Information for this article was contributed by Zeke Miller, Matthew Stobbe, Michael Balsamo and Matthew Perrone of The Associated Press and by Fenit Nirappil and Amrita Jayakumar of The Washington Post. 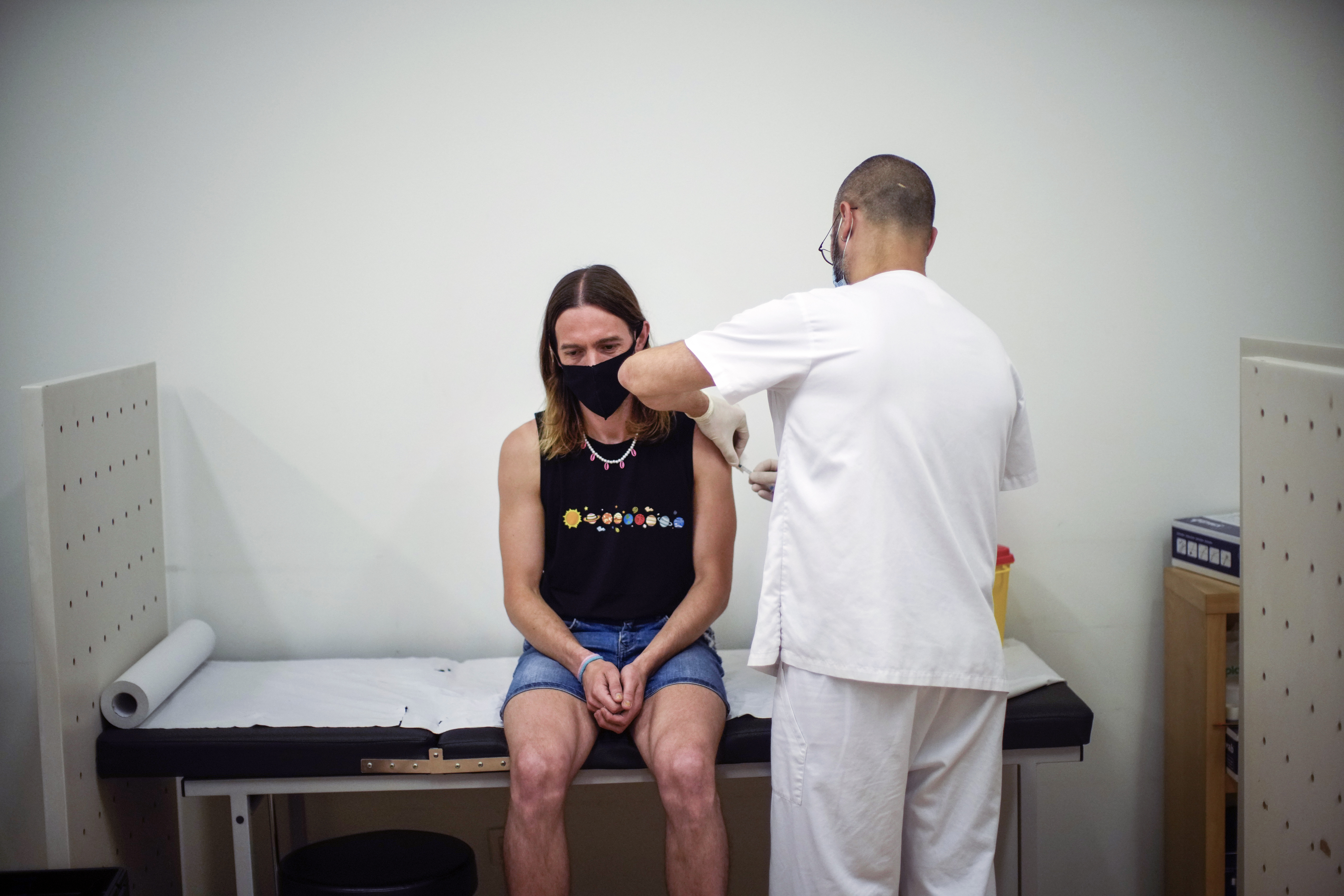 FILE - Daniel Rofin, 41, receives a vaccine against Monkeypox from a health professional in medical center in Barcelona, Spain, July 26, 2022. The U.S. will declare a public health emergency to bolster the federal response to the outbreak of monkeypox that already has infected more than 6,600 Americans. That's according to two people familiar with the matter said. (AP Photo/Francisco Seco, File)