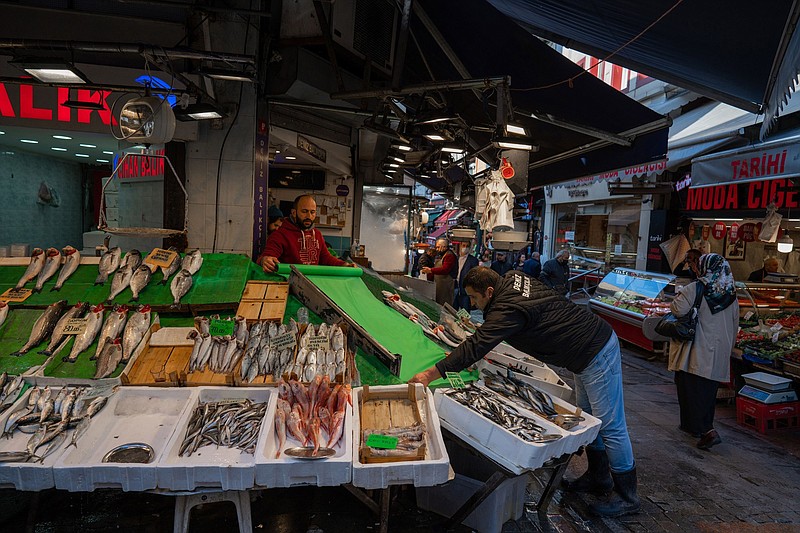 A vendor arranges a display at a fishmonger’s stall in Istanbul, Turkey, in April. (Bloomberg News WPNS/Erhan Demirtas)

Turkish inflation accelerated again, this time soaring to levels unseen since 1998 as its central bank sticks with an ultra-loose monetary course.

The upward march of consumer prices has already forced officials and economists to rewrite forecasts multiple times this year, as efforts to stabilize the lira falter at a time when Russia's invasion of Ukraine is boosting the cost of everything from food to energy.

Data on Wednesday showed that annual inflation sped up to 79.6% last month from 78.6% in June, gaining slightly less than forecast by economists in a Bloomberg survey.

Even in a world consumed by the fastest inflation in decades, Turkey is an outlier that ranks behind only a handful of countries like Zimbabwe, Venezuela and Lebanon, where the pace of price increases has already topped triple digits.

Loosening inflation's grip is proving harder to achieve in Turkey because the central bank has refrained from raising its key rate from 14% under pressure from President Recep Tayyip Erdogan. The Turkish leader believes -- contrary to mainstream economics -- that higher rates cause faster inflation.

"We see no signs of a stabilization in the macroeconomic environment for Turkey arising from the current unorthodox monetary policy settings and recommend refraining from investing in Turkish assets," said Nenad Dinic, emerging markets equities strategist at Bank Julius Baer.

The approach has put Turkish policy makers out of sync with the most aggressive global monetary tightening since the 1980s and pushed the country's rates deeply below zero when adjusted for prices.

Erdogan is intent on keeping the economy powering ahead at a rapid clip ahead of elections scheduled for next June, even as the run-up in consumer costs eats into disposable incomes and threatens his popularity.

Turkish authorities have instead relied on macroprudential measures like curbing commercial loan growth as well as policies aimed at widening the use of the local currency and channeling capital toward long-term investment.

The results are playing out in the currency market, with the lira down more than a quarter of its value against the dollar, this year's biggest loss in emerging markets.

The worst of the crisis is probably still ahead.

Price growth is set to peak around 85% in September-October, according to a forecast range chart accompanying the central bank's latest inflation report. The bank's projection now shows inflation will end the year at 60.4%, an upward revision of almost 18 percentage points that puts prices 12 times above the target.

That outlook is still upbeat relative to the views in the market. Bloomberg Economics predicts inflation will reach a high of 91% in the third quarter and only slow to 69% at the end of 2022.

"If this monetary policy continues, it will be impossible to get ahead of inflation," said Ogeday Topcular, a money manager at RAM Capital SA in Geneva. "Turkey's monetary policy is unsustainable."

Ruling out the option of tightening policy, Kavcioglu said last week that Turkey's year-end inflation may be below the central bank's forecast, with a slowdown possible already this month.

And at least in manufacturing, the rate of output price increases is already decelerating, which S&P Global said amounts to "further signs that the inflationary headwind has peaked."

Asked about the divergence from other central banks, Kavcioglu said that only "time will tell who was right."