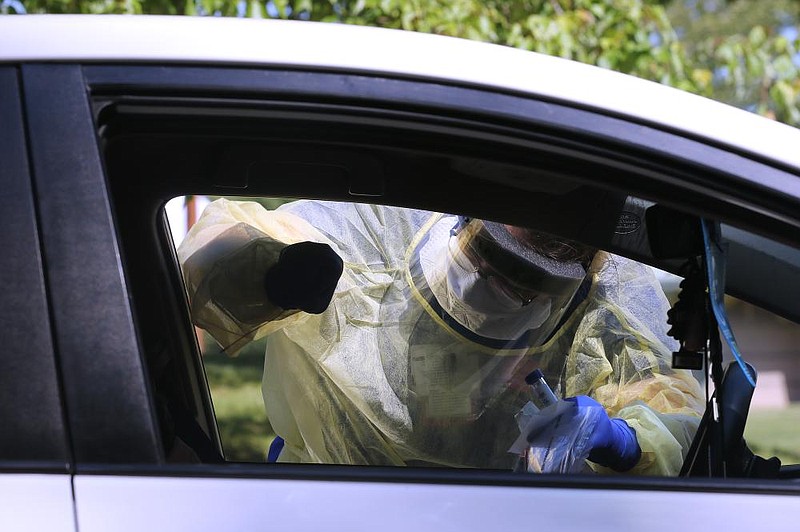 Nurse Sherrie Traffanstedt performs a covid-19 nasal swab during the University of Arkansas for Medical Science's drive-thru evaluation clinic for covid-19 at the Southwest Community Center in Little Rock in this Saturday, May 2, 2020 file photo. See more photos at arkansasonline.com/53testing/ (Arkansas Democrat-Gazette/Thomas Metthe)

The number of people hospitalized with covid-19 in Arkansas fell Friday for the second day in a row as the state's new case numbers continued to slowly decline from last month's peak.

The state's death toll from the virus, as tracked by the Department of Health, rose by eight, to 11,753.

State Epidemiologist Mike Cima said three of the deaths reported Friday happened within the last month. The others occurred in June, he said.

After falling by four on Thursday, the number hospitalized fell again Friday by the same number, to 404.

The number as of Friday was still up from the recent low of 386 that it reached on Sunday and Monday but down from the 417 covid-19 patients who were in the state's hospitals the previous Friday.

In the past five months, the highest the number hospitalized reached was 442 on July 20.

The state's count of cases rose by 1,066, which was smaller by 372 than the increase on Thursday and by 112 than the one the previous Friday.

Already at its lowest level since the week ending July 5, the average daily increase in the state's case count over a rolling seven-day period fell to 1,021.

After rising slightly a day earlier, the number of cases in the state that were considered active fell Friday by 210, to 13,713, as recoveries outnumbered new infections.

The total as of Friday was the smallest since July 7.

"All in all, I think this is capping off another week of downward mobility for our cases so I'm encouraged," Cima said.

He said he was hopeful the state's cases will continue trending downward for at least the next few weeks.

Based on what happened last year, however, he said infections could begin rising among children as they return to classrooms this month.

"We were at a similar spot, where cases were high but coming down at the start of the school year," Cima said.

"What we saw happen was that cases among the pediatric population, 0-18, did increase after the start of the school, but it was very short lived."

One difference is that covid-19 vaccines are now available to children as young as six months old. A year ago, only children 12 and older were eligible.

"I'm hopeful that we can mitigate the worst by increasing the uptake of vaccination," Cima said.

According to the U.S. Centers for Disease Control and Prevention, 46.4% of Arkansas children age 12-17 had been fully vaccinated as of Wednesday.

The percentage was just 18% for children age 5-11, who became eligible for a low-dose version of the Pfizer vaccine in November.

Among children under 5, who became eligible for vaccination in June, the uptake has been even lower.

As of Wednesday, 2,757 Arkansas children in that age group, amounting to about 1.5% of the state's total under 5 population, had received at least one dose, and 195 were fully vaccinated.

Beyond the start of the school year, Cima said he expects a general rise in new infections in the fall and winter.

"We'll have to remain vigilant as we go into November and December -- those cold months where we typically see increases in the spread of respiratory viruses anyway," Cima said.

"Really what we've seen in the past two years is that those are pretty rough months for covid-19."

"We are talking with [the Department of] Health to see if there's anything we need to update," she said.

Growing for the second day in a row, the number of the state's covid-19 patients who were in intensive care rose by four, to 66.

The number on ventilators, also growing for the second straight day, rose by two, to 19.

At its hospitals in Little Rock and Springdale, Arkansas Children's had 17 covid-19 patients on Friday, up from 14 on Thursday, spokeswoman Hilary DeMillo said.