Donors and seminarians to meet at dinner 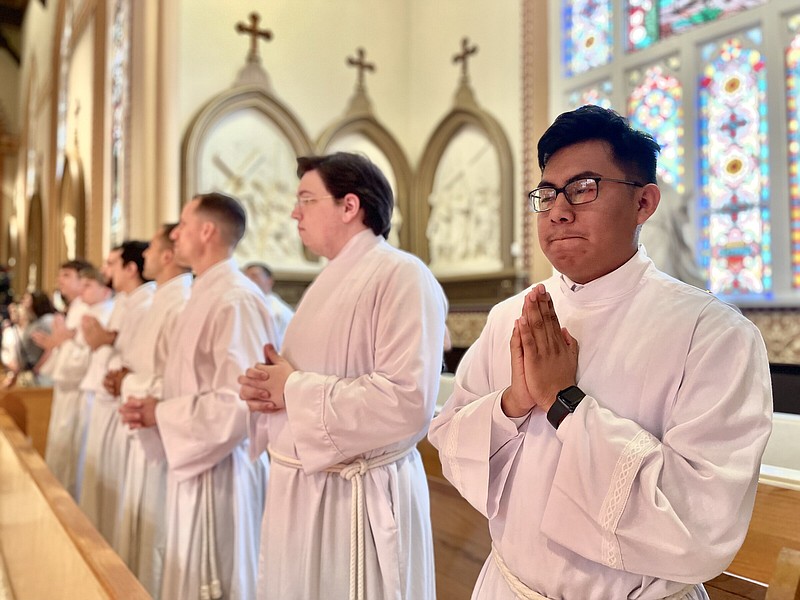 Kevin Medina (right) and other seminarians prayed at the Cathedral of St. Andrew in Little Rock during the ordination of Daniel Wendel and Jaime Nieto as priests May 28. A fundraising dinner this evening will give Catholic donors an opportunity to meet with future priests for the Diocese of Little Rock. (Arkansas Democrat-Gazette/Frank E. Lockwood)

When it comes to paying for seminary in the Catholic Diocese of Little Rock, former vocations director Scott Friend always insisted that the Lord would provide.

It's a good thing He does, because it isn't cheap these days to train future priests.

"It's just under $40,000" to provide education, room and board, health insurance and other necessities for one seminarian for one year, Hebert said.

Fortunately, the diocese has a lot of generous donors -- and an annual fundraiser that has been extraordinarily successful.

Taste of Faith has raised more than $4 million to pay for seminarian education since its launch in 2010.

Hundreds of Catholics are expected to gather tonight in Little Rock for this year's event.

The meal is free, but participants know they'll be asked to make a contribution; and year after year, they do.

Seminarians will be on hand for the dinner.

Rather than clumping them together, organizers place each of them at different tables, enabling them to meet the donors.

As the diocese's director of stewardship and development, Brady helped the diocese launch the annual fundraiser after hearing about a similar event in another diocese.

"We raised well over our goal," she said. "We were just blown away by how well we did and the response we got from everyone."

In past years, there were dinners not only in Little Rock, but in Northwest Arkansas as well, she said.

People have been generous year after year, she said.

Raising money may be easier, in the 21st century, than finding young men who are willing to commit their life to the priesthood.

Fortunately, Friend had a gift for finding suitable candidates.

During his 16 years as vocations director, the number of seminarians swelled.

By the time Bishop Anthony Taylor appointed Friend, in 2021, to serve as pastor of Blessed Sacrament Church in Jonesboro, the average age of Arkansas' priests had fallen from 65 to 48, the Arkansas Catholic newspaper reported at the time.

Nearly two-thirds of the 67 diocesan priests in active ministry at that point had known Friend as their vocations director, it noted.

In one year, the number of seminarians reached 45, Hebert said.

Currently, the diocese is preparing 20 seminarians for the ministry.

They'll be needed in a diocese with 130 parishes and missions and 158,378 Catholics.

While many Protestant churches are losing members, the number of Catholics in Arkansas is growing.

Overall, 2,469 received first Holy Communion and another 2,375 were confirmed.

The diocese needs priests and does everything it can to remove barriers to service.

"Not many dioceses do this, but we don't ask our seminarians to contribute anything financially to their formation. It's all provided for by the people of God," Hebert said.

"Monsignor was very adamant about this, because we don't want a financial challenge or a financial problem keeping someone from saying yes to the Lord," Hebert said.

As vocations director, he wants to "continue to create an environment for these young men, where they don't have to worry about the financial question. They can just focus on ... prayer and becoming the best priests they possibly can be," he said.

Print Headline: Donors and seminarians to meet at dinner