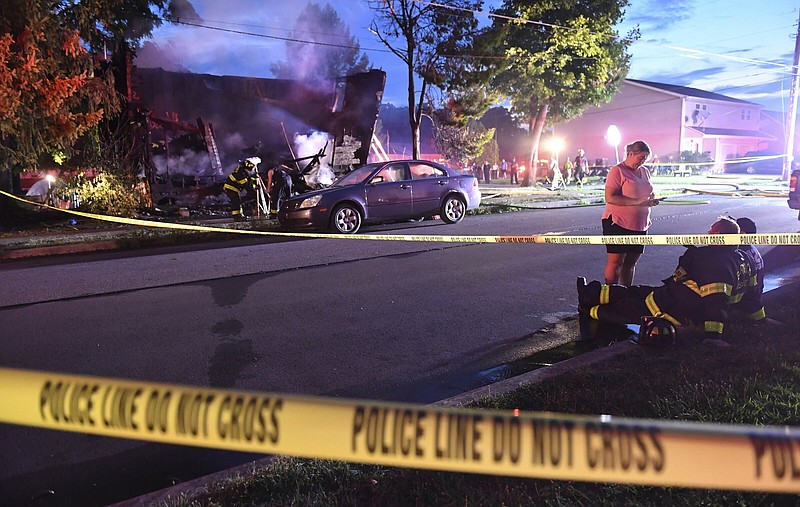 Firefighters set up lights in front of a fatal house fire at 733 First St. in Nescopeck, Pa, on Friday. (AP/Bloomsburg Press Enterprise/Jimmy May)

NESCOPECK, Pa. -- Fire tore quickly through a house early Friday, killing seven adults and three children and horrifying a volunteer firefighter who arrived to battle the blaze only to discover that the victims were his family, authorities said.

A criminal investigation into the fire is underway, authorities said. The children who died in the fire were ages 5, 6 and 7, Pennsylvania State Police said in a news release, while the seven adults ranged from their late teens to a 79-year-old man. Autopsies were planned for this weekend.

He told WNEP-TV that 13 dogs were also in the home but did not say if he knew whether any survived. Baker said 14 people were living in the home. One was out delivering newspapers and three others escaped.

Baker said the address initially given for the call was a neighboring home, but he realized it was his family's residence as the fire truck approached. He said his unit was the first on scene and the home was already engulfed in flames.

Baker grabbed a hose and air pack and started pouring water on the fire, desperate to make his way inside and calling out to his son. His chief realized whose house it was, and fellow firefighters escorted Baker back to the firehouse.

"The information I have is that the fire started and progressed very quickly, making it very difficult to get out," he said.

Three people were able to escape the blaze, Sanguedolce said. Four state police fire marshals are involved in the investigation, although it won't be classified as a criminal probe unless they determine the fire was intentionally set, he said.

"The kids that were there and my two kids were just visiting their aunt and uncle," Baker told WNEP. "Those were the ones who own the house."