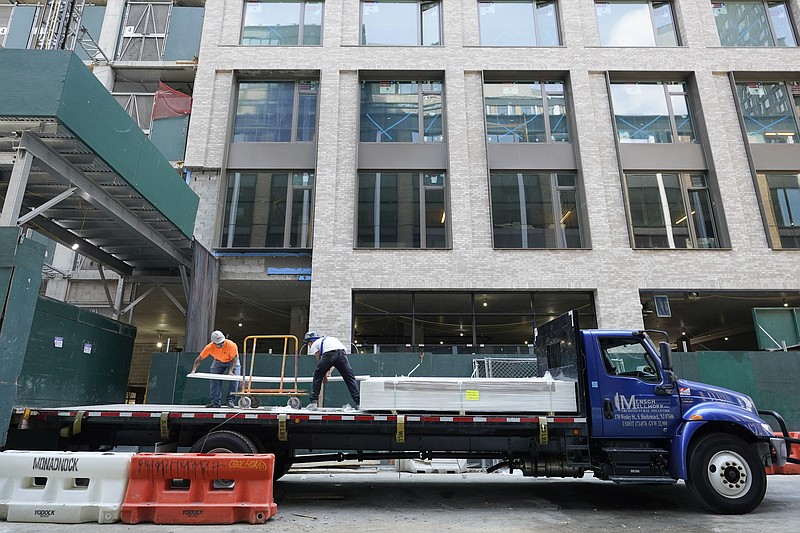 Construction workers unload sheet rock at a residential and commercial building under construction at the Essex Crossing development on the Lower East Side of Manhattan, Thursday, Aug. 4, 2022. America’s hiring boom continued last month as employers added a surprising 528,000 jobs despite raging inflation and rising anxiety about a recession. (AP Photo/Mary Altaffer)

The economy has now recovered all 22 million jobs lost in early 2020 when covid-19 slammed the U.S. and unemployment fell to 3.5%, the lowest level since the pandemic. There were 130,000 more jobs created in July than in June, for the best monthly jobs report since February.

The numbers from the Labor Department arrived Friday amid concern the economy is losing momentum. Gross domestic product in the U.S. shrank in the first two quarters of 2022 -- an informal definition of recession. But most economists believe the strong jobs market has kept the economy from slipping into a downturn.

"Recession -- what recession?" wrote Brian Coulton, chief economist at Fitch Ratings, after the numbers came out. "The U.S. economy is creating new jobs at an annual rate of 6 million -- that's three times faster than what we normally see historically in a good year. "

Economists had expected only 250,000 new jobs in July.

There are, of course, political implications in the jobs numbers: Americans have grown increasingly anxious not only about a looming recession, but also rising prices. And those concerns most certainly will be at the forefront of voters' minds during November's midterm elections as President Joe Biden's Democrats seek to maintain control of Congress.

The labor market, meanwhile, is "still sizzling" and that can feed into inflation, said Diane Swonk, the chief economist at KPMG. "This argues for another 75 basis point hike by the Fed."

At a news conference last week, Fed Chair Jerome Powell said another large rate increase at the September meeting was possible, but he gave no specific forward guidance and said future increases would depend on data. Investors interpreted the remarks as a pivot to a less aggressive posture and markets rallied in response.

Fed presidents this week have strongly countered that impression, arguing the central bank wasn't intending a pivot away from aggressive hikes and that it would take significant news to alter their posture.

"If we get to September with things being where they are today -- and that's a big if -- 75 basis points and signals of the risk of another 75 basis points, that's what you'll see," said Mohamed El-Erian, chief economic adviser to Allianz SE and a Bloomberg Opinion contributor.

Ultimately, it's the inflation data, which could also be affected by falling commodity prices and supply-chain improvements, that will decide the September move, said Julia Coronado, co-founder of MacroPolicy Perspectives and a former Fed economist.

All else equal, the jobs data "would lean in favor of either a 75 basis-point hike or a longer hiking cycle, because we are not seeing moderating job growth," she said.

On Friday, Biden took credit for the resilient labor market, saying "it's the result of my economic plan."

The president has boosted job growth through his $1.9 coronavirus relief package and $1 billion bipartisan infrastructure law. Republican lawmakers and some leading economists, however, point to that government spending as the reason for current inflation levels, which haven't been seen in 40 years.

And for millions of Americans it is the fading power of the paycheck that remains front and center.

Hourly earnings posted a healthy 0.5% gain last month and are up 5.2% over the past year. That is not enough to keep up with inflation. And that means many Americans, especially the poorest, are having to scrimp in the face of high prices for groceries, gasoline and even school supplies.

The Labor Department also revised May and June hiring numbers, saying an extra 28,000 jobs were created in those months. Job growth was especially strong last month in the healthcare industry and at hotels and restaurants.

The jobless rate fell as the number of Americans saying they had jobs rose by 179,000 and the number saying they were unemployed dropped by 242,000. But 61,000 Americans dropped out of the labor force in July, trimming the share of those working or looking for work to 62.1% last month from 62.2% in June.

Friday on Wall Street, the S&P 500 was 0.1% lower after nearly erasing a sell-off that began right when the Labor Department released its report. Investors appear to be weighing the positives of a strong job market against the possibility that the Fed will continue to raise rates aggressively to cool the economy and inflation.

The attempt to interpret vastly divergent economic data is being made both on Wall Street and on Main Street.

A single mother, she is weighing several offers, looking for one that is close to her home in Manhattan and pays enough to let her take care of her two children.

Amy Glaser, a senior vice president at the global staffing agency Adecco, said her firm was still struggling to fill hourly jobs, especially in retail and logistics. Employers may not have made those positions attractive enough, and, increasingly, may do without them.

"By the time someone applies and a recruiter reaches out, they have about 24 hours to place them in a role or they'll be gone," Glaser said. "The candidates are in the driver's seat."

That is a far cry from the situation two years ago when the pandemic brought economic life to a near standstill as companies shut down and millions of people stayed home. In March and April 2020, American employers slashed a staggering 22 million jobs, and the economy plunged into a deep, two-month recession.

In a report filled with mostly good news Friday, the Labor Department did note that 3.9 million people were working part-time for economic reasons in July, up by 303,000 from June.

According to the Labor economists, that "reflected an increase in the number of persons whose hours were cut due to slack work on business conditions." Some employers are also reporting signs of slack in the job market.

Aaron Sanandres, CEO and co-founder Untuckit, an online clothing company with nearly 90 stores, has noticed in the past few weeks that it's been easier filling jobs at its corporate headquarters in New York and part-time roles at its stores.

For example, Sanandres noted that his company was able to hire two people in e-commerce in less than a month. In the past, it took more than twice that long.

"We have had a plethora of candidates, " Sanandres added. He also said the labor market has been loosening up for engineers, likely as a result of some layoffs at technology companies.

Untuckit, like many retailers, has lost a good chunk of hourly workers to gig jobs that offer more flexibility. Sanandres said the company is still fighting that competition, but it's getting easier.

The Labor Department reported Tuesday that employers posted 10.7 million job openings in June -- a healthy number but the lowest since September.

Even with some tightening in the labor market in some sectors, the employment data released Friday resoundingly shows an astonishingly strong jobs market in the U.S.

"Underestimate the U.S. labor market at your own peril," said Nick Bunker, head of economic research at the Indeed Hiring Lab. "Yes, output growth might be slowing and the economic outlook has some clouds on the horizon. But employers are still champing at the bit to hire more workers. That demand may fade, but it's still red hot right now."

Information for this article was contributed by Paul Wiseman, Josh Boak and Courtney Bonnell of The Associated Press, Lydia Depillis of the New York Times, and Steve Matthews and Jonnelle Marte of Bloomberg News. 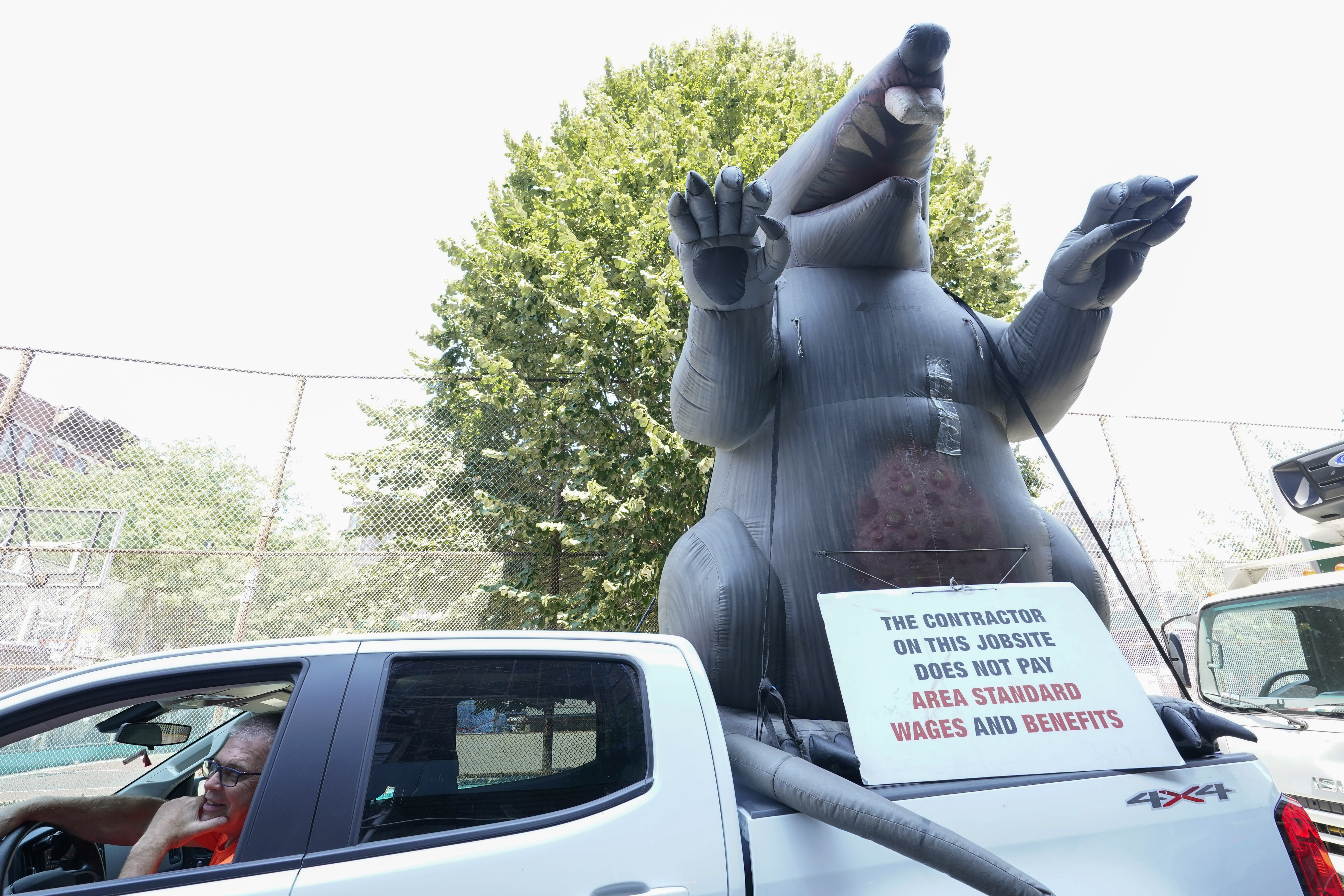 A member of the Carpenters' Union with an inflatable rat are protesting the contractor building a Shake Shack on the Lower East Side of Manhattan, Thursday, Aug. 4, 2022. On Friday, Aug. 5, the Labor Department delivers its July jobs report. (AP Photo/Mary Altaffer) 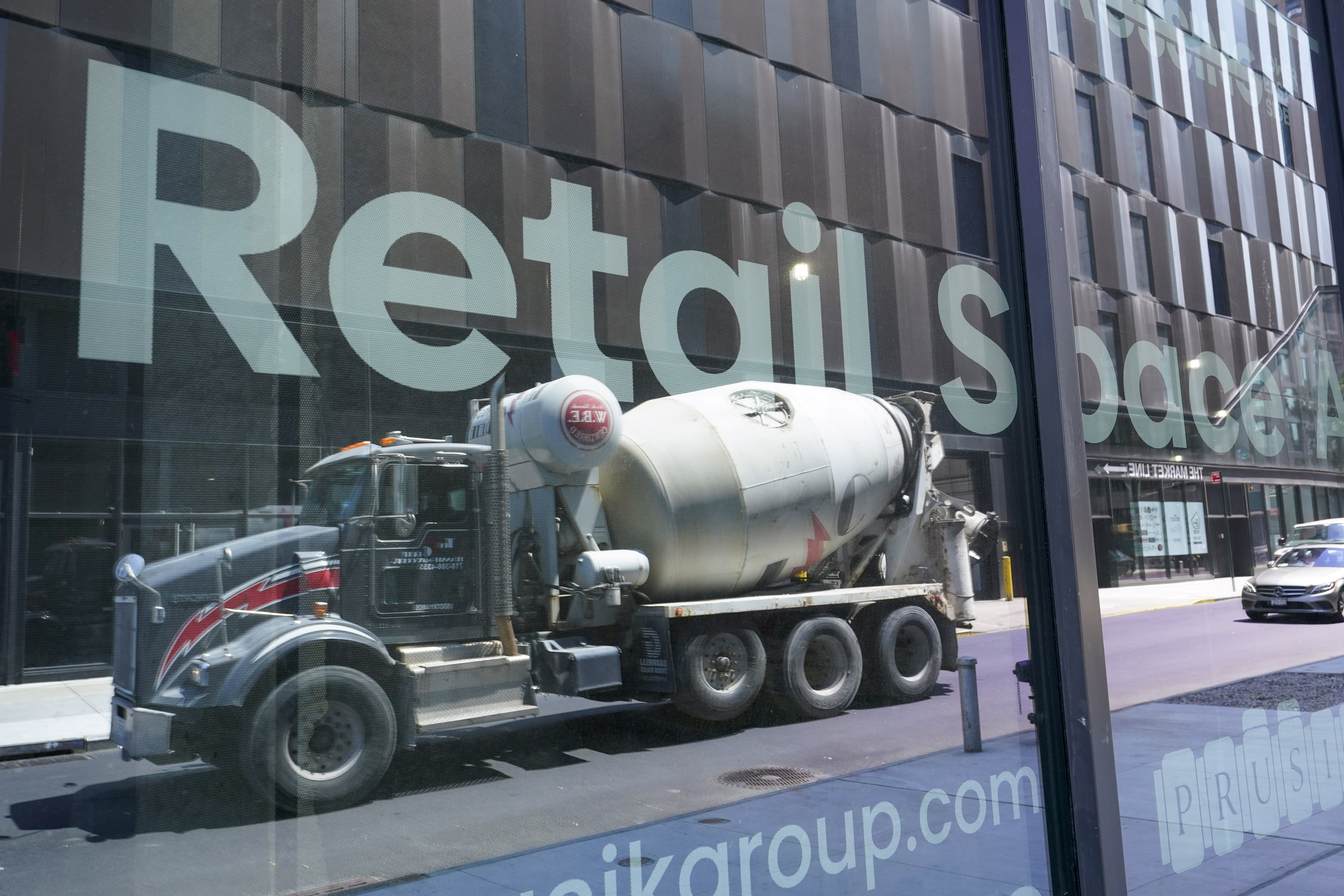 A cement mixer truck is reflected on a window of window advertising retail space for rent at a residential and commercial building under construction at the Essex Crossing development on the Lower East Side of Manhattan, Thursday, Aug. 4, 2022. America’s hiring boom continued last month as employers added a surprising 528,000 jobs despite raging inflation and rising anxiety about a recession. (AP Photo/Mary Altaffer) 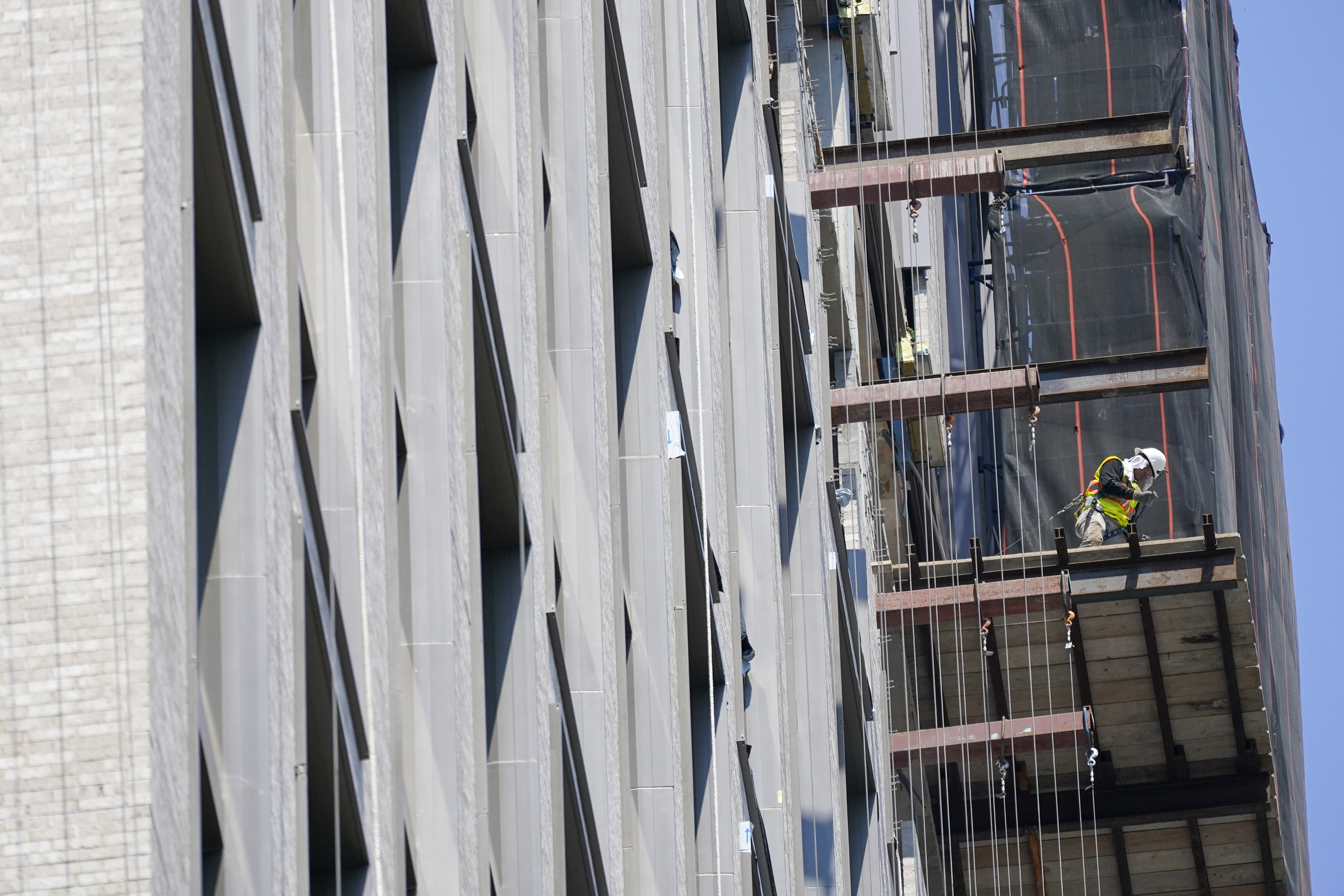 Construction workers is seen working on a high rise residential and commercial building under construction at the Essex Crossing development on the Lower East Side of Manhattan, Thursday, Aug. 4, 2022. America’s hiring boom continued last month as employers added a surprising 528,000 jobs despite raging inflation and rising anxiety about a recession. (AP Photo/Mary Altaffer) 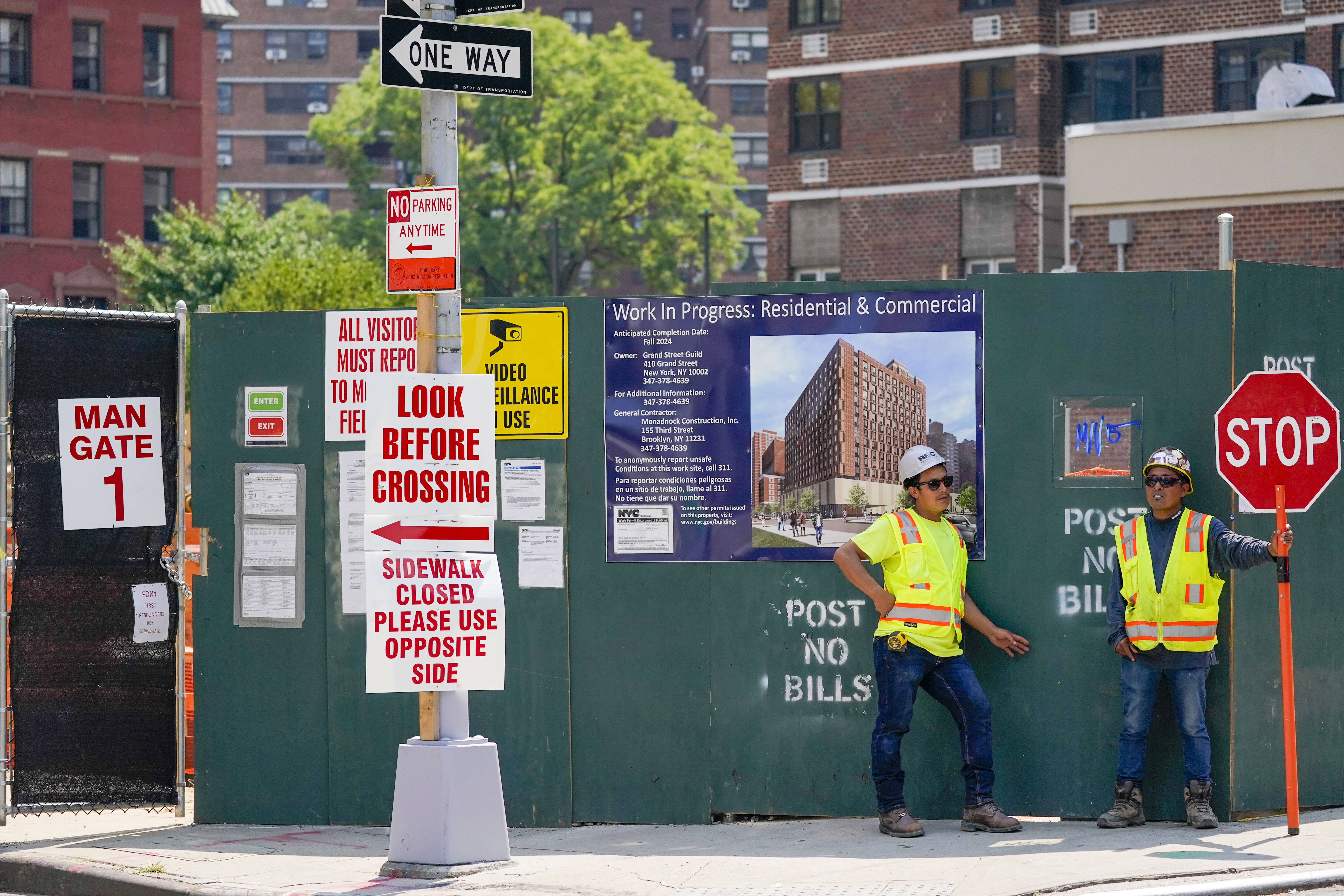 Construction workers help direct traffic outside a residential and commercial building under construction at the Essex Crossing development on the Lower East Side of Manhattan, Thursday, Aug. 4, 2022. America’s hiring boom continued last month as employers added a surprising 528,000 jobs despite raging inflation and rising anxiety about a recession. (AP Photo/Mary Altaffer)