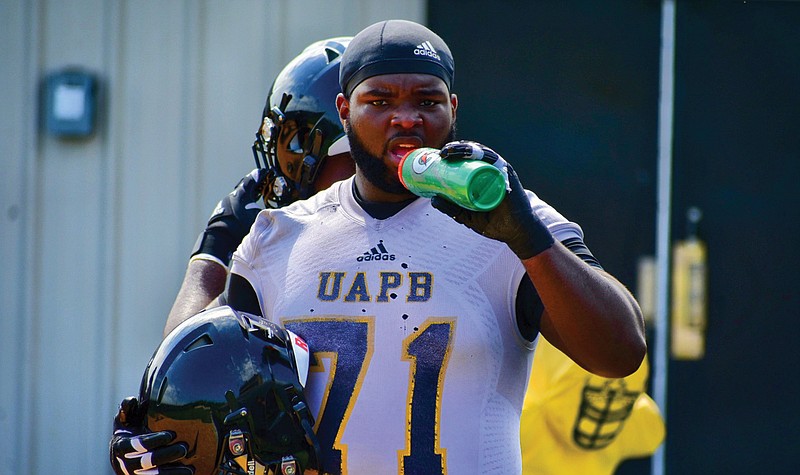 Since then, the University of Arkansas at Pine Bluff's outstanding fifth-year left tackle has been honored even further. Sports data firm Stats Perform, considered a leading authority on Football Championship Subdivision information, named Evans to its preseason All-American football team, and the national radio show "From the Press Box to Press Row" (BOXTOROW) picked Evans as a preseason Historically Black College/University All-American.

Those honors came just this week. Although Evans earned the BOXTOROW postseason All-American tab last year, each accolade comes as a surprise to the 6-foot-4, 295-pounder from Houston.

"It's definitely never necessarily a given that you're going to receive one of these awards," Evans said. "Each one is a blessing, and I'm just looking forward to the next one."

"He's disciplined in his approach," third-year Golden Lions Coach Doc Gamble said. "He plays the right way all the time, every single time. He takes coaching. He's had various coaches throughout his career, and he's taken every coach's little nuggets and put it in his toolbox. That's what made him better, every single year."

Evans took advantage of an extra year of eligibility the NCAA granted each player that was enrolled during the 2020 season, when covid-19 was in its infancy.

Today, he's the senior member of the offensive line, the unit nicknamed "The Moving Crew," which last fall had every starter from the spring 2021 SWAC runner-up team return.

"I'm just trying to instill in our new guys what TMC stands for and what the new coach is trying to create by instilling TMC," Evans said. "I feel like the coaching has been good because we've been around here for five weeks and we've had a chance to mingle and get to know each other, but we had a couple of new guys come in as well."

New offensive line coach Alex Farah, one of five new additions to Gamble's staff, has taken over a line that must replace two starters who graduated, left guard Atondre Smith and center Eric Jones III. Having Evans anchor the line is a blessing to the former assistant at Kansas' Independence Community College.

"There's not a whole lot of coaching with him because he's so talented, he can out-talent his way out of things," Farah said. "That's the thing that's been awesome about him, his work ethic. He's got the talent, the technique, the endurance. He's always trying to push himself so he can go to the NFL because he's got a legitimate chance of playing there."

The humble Evans says Farah doesn't treat him any differently from the other linemen.

"He works hard. He treats me like everybody else. He coaches me real tough, and that's what I need out of Coach," Evans said.

Junior right tackle Noah Hayes is a returning starter and has progressed since the spring, Farah said, but the coach is also looking for Ryan Atkins-Frazier to compete for playing time at the position. Junior Jordan Mack started in front of Atkins-Frazier at right guard last year and is looking to wrap up that job again.

"That's exactly what it is, one day in the books," he said. "It was chaotic, especially for a lot of new guys. Older guys are going to be who they are, and we know who they are. The younger guys were just a little wide-eyed today."

Chaos is what Gamble expected out of his team Friday. The Lions had to retain plenty of information from their first full spring camp since 2019, and Gamble wanted to see who could manage a full practice under the hot August sun to start drills.

"We threw a lot at them to see who could manage it, but eventually it'll slow down for them at some point," Gamble said. "It was a typical first day, but we'll be better tomorrow, I know that." 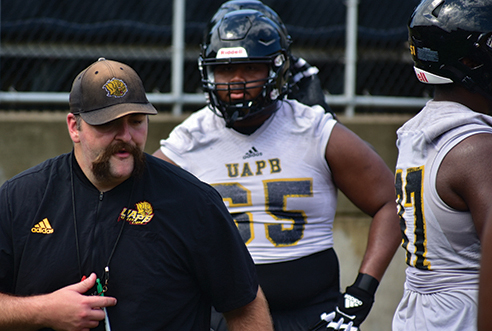