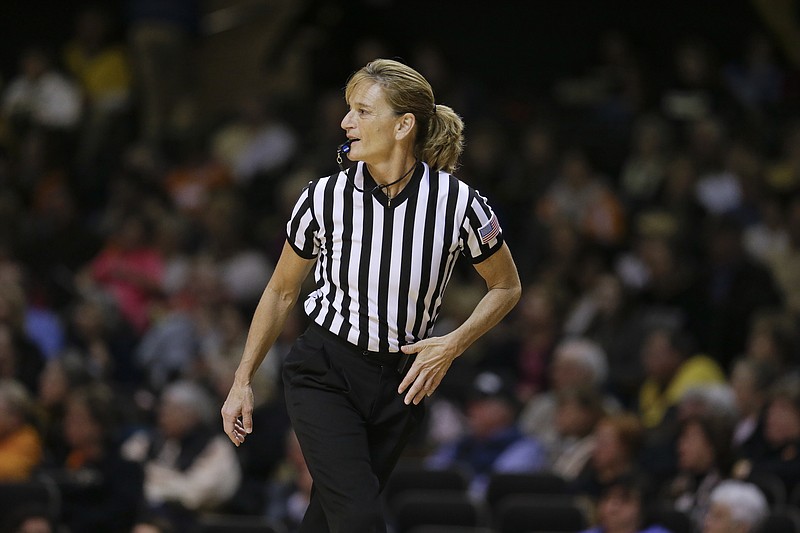 FILE - Referee Dee Kantner works in the second half of an NCAA college basketball game between Tennessee and Vanderbilt Monday, Jan. 5, 2015, in Nashville, Tenn. Kantner, a veteran referee of women’s games who works for multiple conferences, finds it frustrating to have to justify equal pay. “If I buy an airline ticket and tell them I’m doing a women’s basketball game they aren’t going to charge me less,” she said. (AP Photo/Mark Humphrey, FILE)

The NCAA earned praise last year when it agreed to pay referees at its men's and women's basketball tournaments equally. The gesture only cost about $100,000, a tiny fraction of the roughly $900 million networks pay annually to broadcast March Madness.

Now, as the NCAA examines various disparities across men's and women's sports, pressure is rising to also pay referees equally during the regular season. Two Division I conferences told The Associated Press they plan to equalize pay, and another is considering it. Others are resisting change, even though the impact on their budgets would be negligible.

"The ones that are (equalizing pay) are reading the writing on the wall," said Michael Lewis, a marketing professor at Emory University.

The details of NCAA referee pay are closely guarded, but The Associated Press obtained data for the 2021-22 season that show 15 of the NCAA's largest -- and most profitable -- conferences paid veteran referees for men's basketball an average of 22% more per game.

That level of disparity is wider than the gender pay gap across the U.S. economy, where women earn 82 cents for every dollar a man earns, according to the 2020 census. And it is an overwhelming disadvantage for women, who make up less than 1% of the referees officiating men's games.

The people who provided AP with data for nearly half of the NCAA's 32 Division I conferences have direct knowledge of pay scales, and they did so on condition of anonymity because the information is considered private.

The Northeast Conference had the widest per-game pay disparity among the NCAA leagues AP analyzed, with the most experienced referees for men's games earning 48% more. The Atlantic-10 paid veteran men's refs 44% more, while the Colonial Athletic Association paid them 38% more.

Of the conferences with unequal pay contacted by AP, two -- the Pac-12 and the Northeast Conference -- said they plan to level the playing field starting next season. A third, the Patriot League, which had a 33% pay gap last year, said it is reviewing equity for officials in all sports. "Pay is part of that," commissioner Jennifer Heppel said.

Relative to the amounts of money these leagues generate, the cost of bridging the pay gap can seem small.

For example, the SEC paid referees for men's games 10%, or $350, more than those officiating women's games. Over the course of a season, it would cost the SEC a couple hundred thousand dollars to pay them equally.

The most experienced Division I referees -- for men's or women's games -- are well paid. Some earn more than $150,000 in a season, officiating dozens of games across multiple conferences. Newer referees earn far less, supplementing income from another job.

All NCAA referees are independent contractors, with no union representing their interests, and all have to cover their own travel expenses.

The busiest referees can work five or six games a week in different cities, running up and down the court for 40 minutes one night, getting a few hours of sleep, and then waking up at 4 a.m. to catch a flight to their next destination.

Dee Kantner, a veteran referee of women's games who works for multiple conferences, finds it frustrating to have to justify equal pay.

"If I buy an airline ticket and tell them I'm doing a women's basketball game they aren't going to charge me less," she said.

Several conference commissioners said the men's and women's games do not generate equal amounts of revenue, and that the level of play is not equal, and so referee salaries are set accordingly.

"Historically we have treated each referee pool as a separate market," said Big East Commissioner Val Ackerman. "We paid rates that allow us to be competitive for services at our level. I think the leagues are entitled to look at different factors here. I don't see it as an equity issue -- I see it as a market issue."

Of the roughly 800 referees officiating women's basketball this past season, 43% were female, a proportion that's been relatively consistent over the past decade. But just six women officiated men's games last year -- a number that has slowly grown over the last few years.

Penny Davis, the NCAA's supervisor of officials, said conferences are trying to recruit more women to officiate men's games, which is another way to help bridge the gender pay gap.

But Davis says she would hate to see even fewer women refereeing women's basketball. "We don't want to lose our best and brightest," she said. 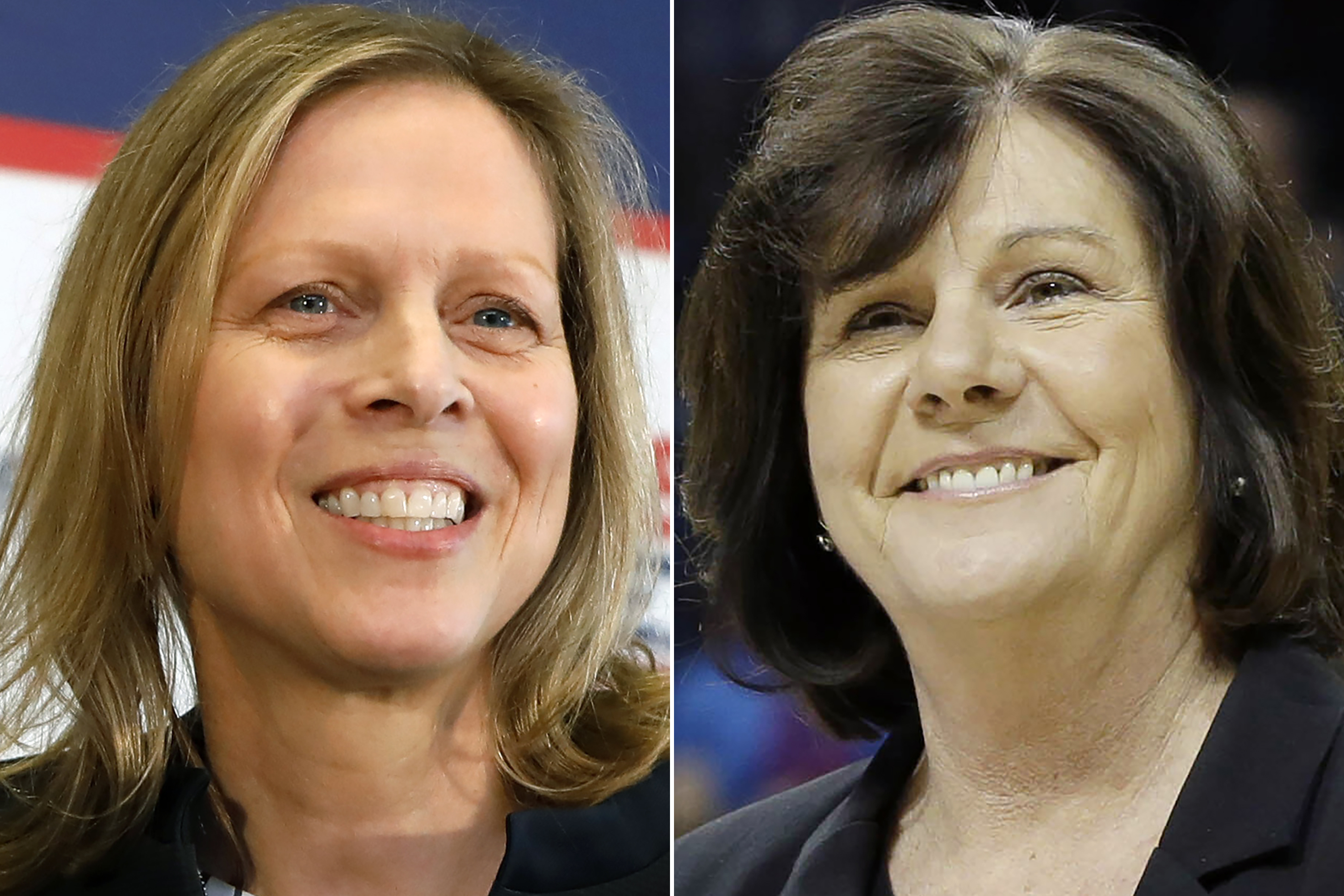 FILE - At left, Big East Commissioner Val Ackerman smiles during a press conference at Madison Square Garden in New York, Thursday, June 27, 2019. At right, Atlantic 10 Commissioner Bernadette McGlade smiles after the NCAA college basketball Atlantic 10 conference tournament championship game between Saint Joseph's and VCU at the Barclays Center in New York, Sunday, March 16, 2014. Both McGlade and Ackerman praised what the NCAA did last season by paying men’s and women’s basketball officials equally in the tournaments after a review showed many inequities between the two sports. However, both said the tournaments aren't the same as regular-season conference games. (AP Photo/File) 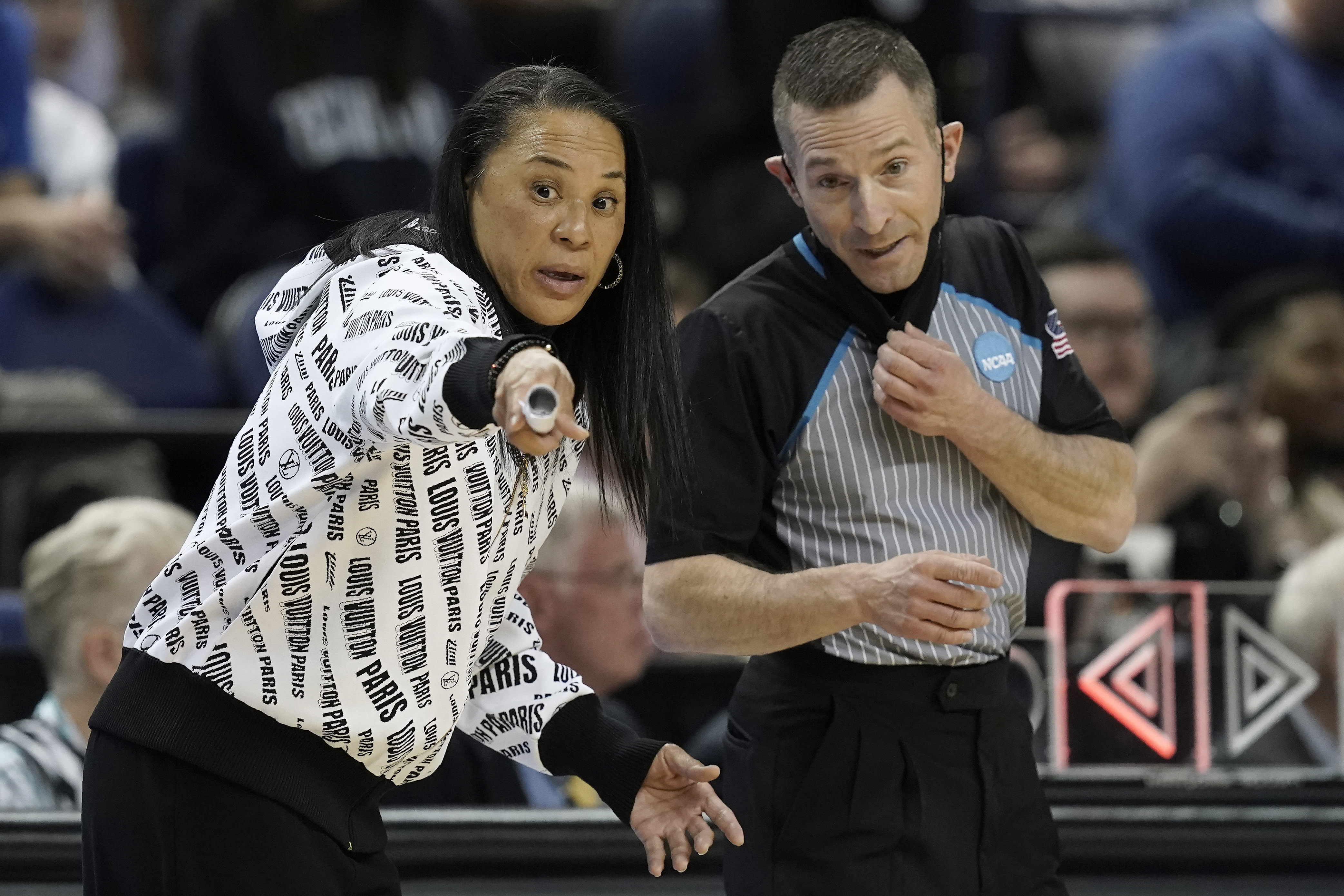 FILE - South Carolina head coach Dawn Staley speaks with an official during the first half of a college basketball game against Creighton in the Elite 8 round of the NCAA tournament in Greensboro, N.C., Sunday, March 27, 2022. Staley said referees on the men's side should be “stepping up” and advocating for equal pay for women's referees. “They don't do anything different," she said. “Why should our officials get paid less for taking the (expletive) we give them?" (AP Photo/Gerry Broome, File) 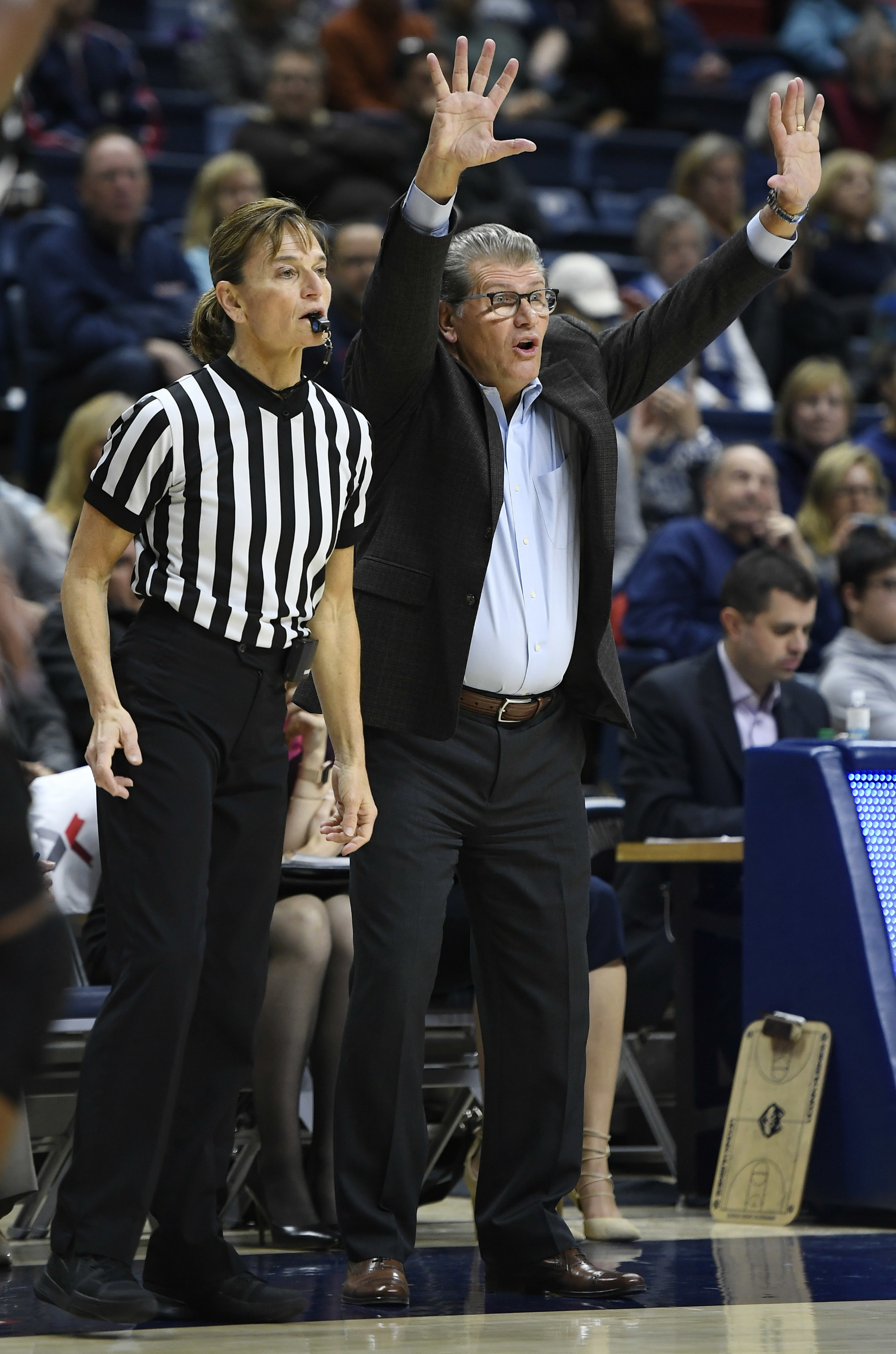 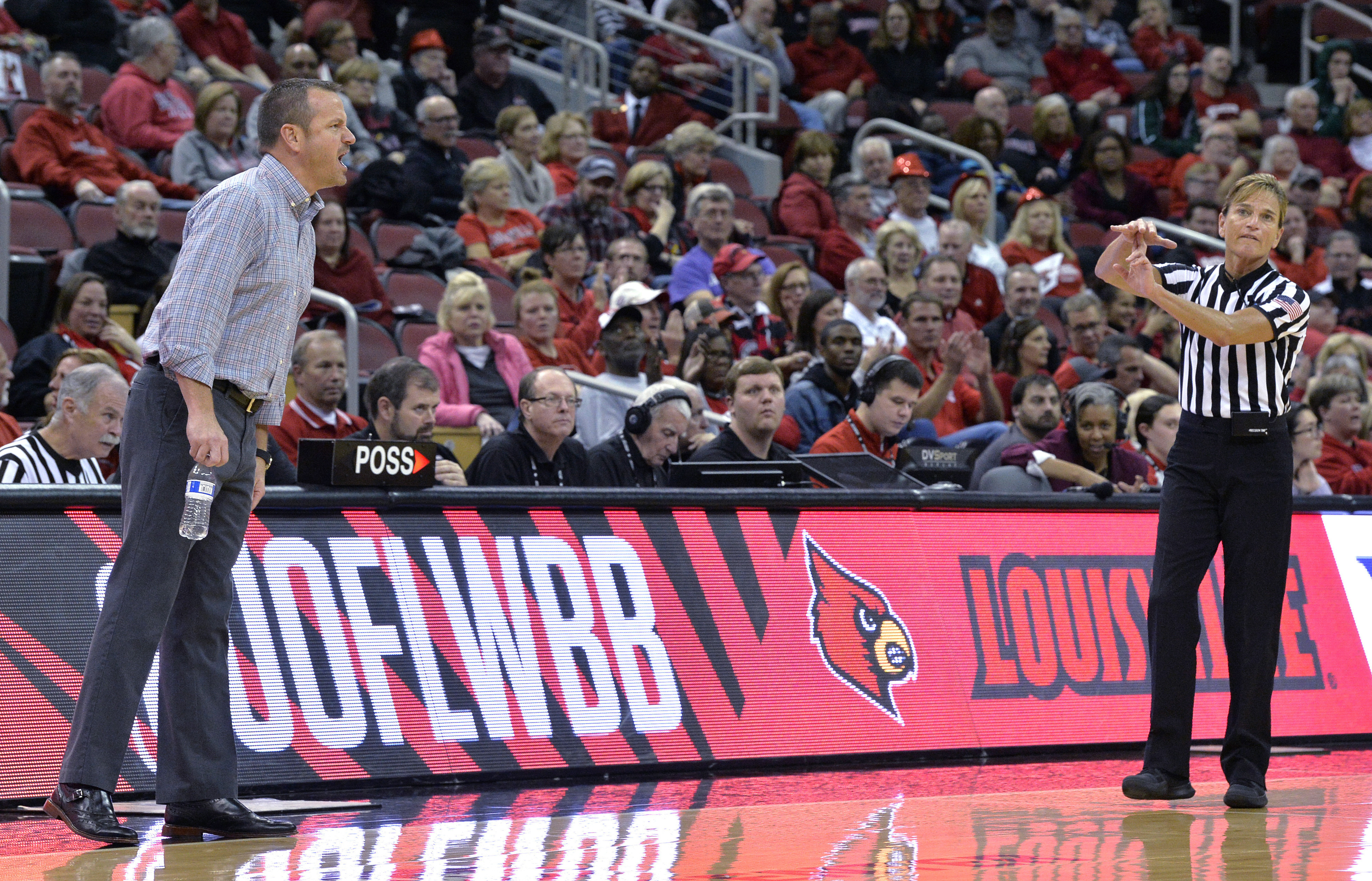 FILE - Referee Dee Kantner gives Louisville coach Jeff Walz a technical foul during the second half of the team's NCAA college basketball game against Nebraska in Louisville, Ky., Thursday, Nov. 29, 2018. Louisville won 85-68. Kantner, a veteran referee of women’s games who works for multiple conferences, finds it frustrating to have to justify equal pay. “If I buy an airline ticket and tell them I’m doing a women’s basketball game they aren’t going to charge me less,” she said. (AP Photo/Timothy D. Easley, File) 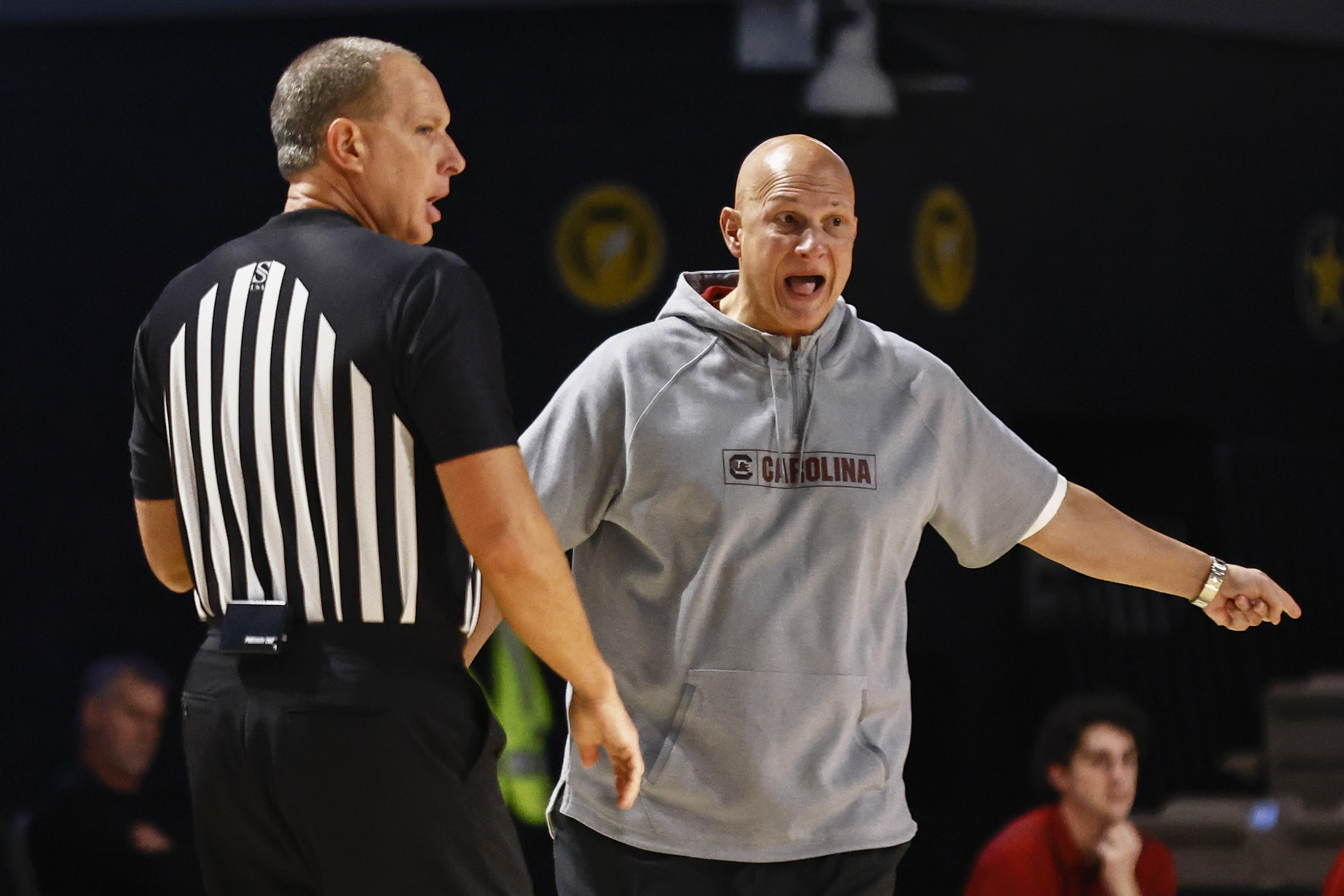