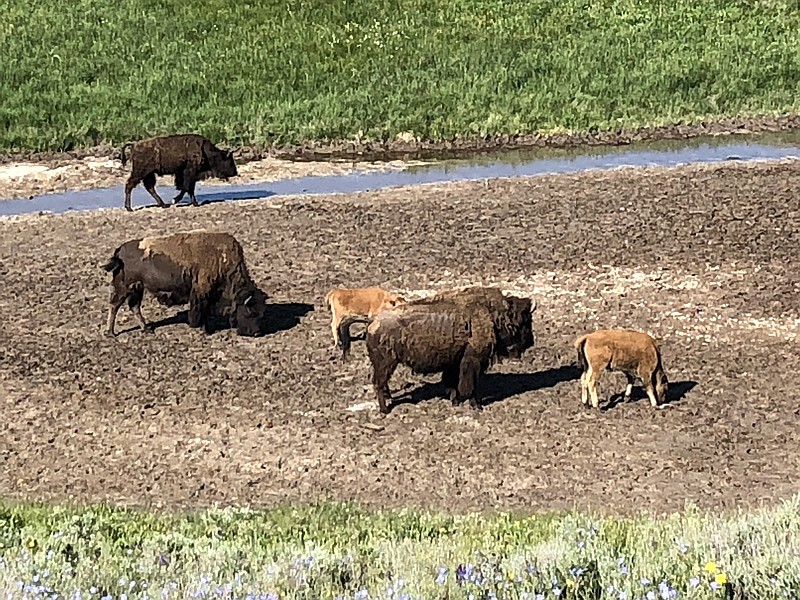 Several bison with calves graze along a water source in Hayden Valley on the east side of the lower loop in Yellowstone National Park. (Special to the Democrat-Gazette/Jeff Thatcher)

If you followed the massive flooding that occurred in June at the North Entrance of Yellowstone National Park, you might have thought the park was inaccessible this year. After having returned from a recent trip to Yellowstone and Grand Teton National Park, I can assure you that it's not.

Thanks to all that June rain, Yellowstone was glorious in its greenery; the hills were alive with green grass and colorful wildflowers — a definite change from the last time I was there in 2018, when the park was dry and dusty.

This trip, my wife and I took along a good friend who had never been to either national park; it was on her bucket list, and she was not disappointed.

Besides the greenery and flowers, we also visited the various geysers and hot springs, primarily on the west side of the park, and saw assorted wildlife including bison, elk, deer, a mother bear and two cubs, a coyote, trumpeter swans, Canada geese, and ducks on the east side.

One of the best aspects of going this summer involved the relative lack of vehicle traffic; most years it's bumper-to-bumper and drivers are required to circle repeatedly to find a parking space at one of the geyser basins, waterfalls or other attractions. This time, we found parking easily.

I was born and raised in Missoula, Mont., and many of my childhood family vacations involved going to Yellowstone and camping in a large canvas tent in many of the park campgrounds. Black bears were literally residents. I recall seeing "Sally," a campground bear, during many visits. In that era the park's garbage dumps were still open, and they attracted large numbers of bears. When my dad was a child in the late 1920s, he went to the park in a Model T truck. He recalled a scene of a park ranger giving a talk on a stool with a rifle across his lap. Behind the ranger was a garbage dump that attracted black bears early during his talk; they later left, only to be replaced by grizzly bears. Things have changed drastically since then. In 1970, the last of the dumps was closed. 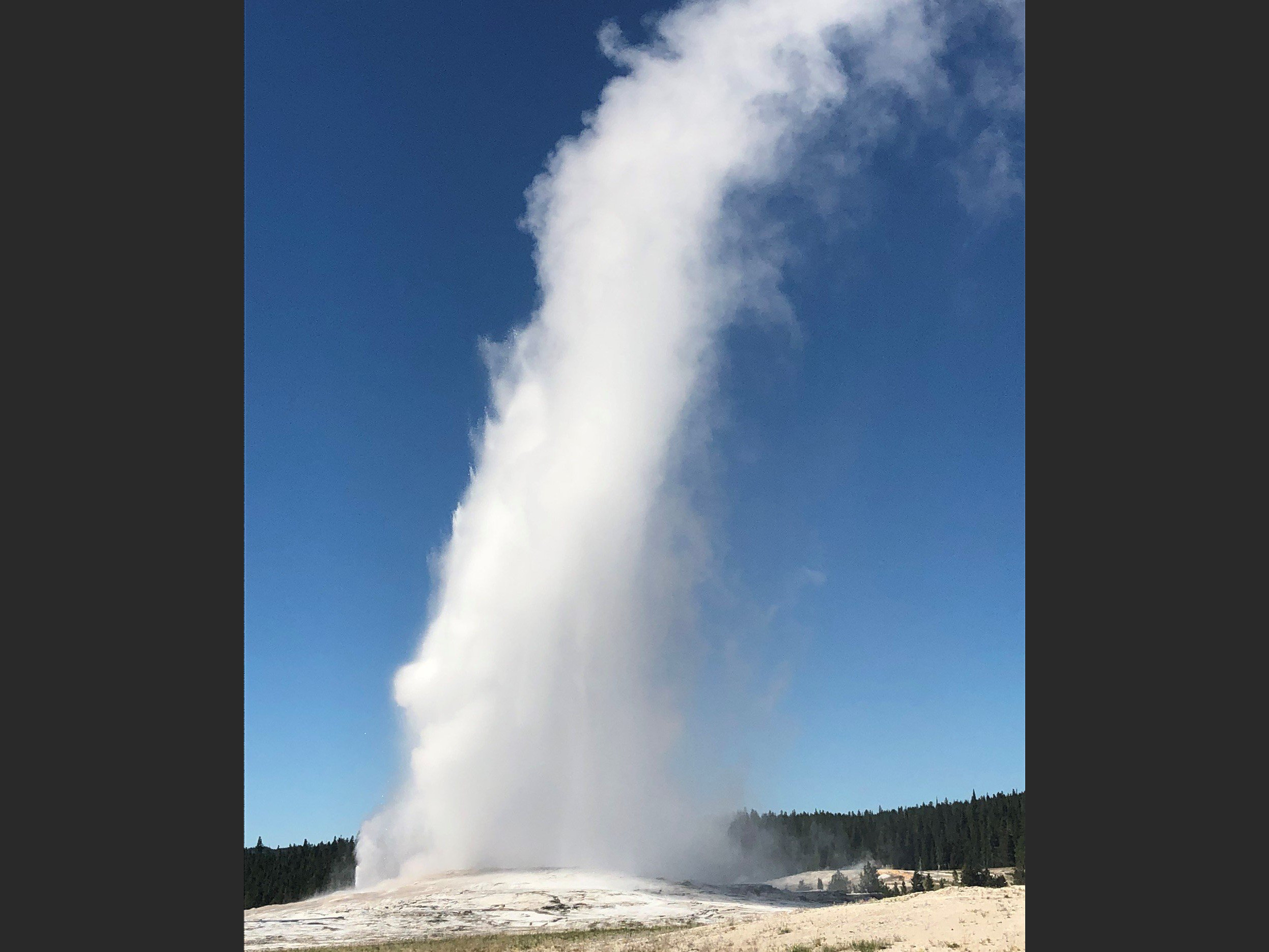 Old Faithful Geyser in Yellowstone National Park is the world’s best-known geyser. Its eruption intervals have varied from 40 to 126 minutes. (Special to the Democrat-Gazette/Jeff Thatcher)
CLOSED DUE TO FLOODING

The North Entrance at Gardiner, Mont., where I normally go into the park, is closed due to the damage done by the flooded Yellowstone River and speculation that it may never reopen has been increasing. The Northeast Entrance at Red Lodge is also closed due to flooding.

But the West Entrance at West Yellowstone, Mont., is open — along with the South Entrance, which leads to Grand Teton National Park, and the East Entrance, which leads to Cody, Wyo. We availed ourselves of all three entrances, initially going in through West Yellowstone and visiting the North Loop, which includes Mammoth Hot Springs, Norris Geyser Basin, Tower- Roosevelt and Canyon Village.

We then traversed the South Loop, which includes Madison; the Lower, Midway and Upper Geyser Basins; Old Faithful; Fishing Bridge; West Thumb and Yellowstone Lake. From there, we drove down to Grand Teton National Park for a day and then drove back up into Yellowstone, taking the East Entrance out of the park to Cody before driving back to Billings, Mont., where we began our trip.

The human history of the park goes back at least 11,000 years during the Paleoindian Period when "a Clovis point from this period was made from obsidian obtained at Obsidian Cliff," the NPS writings reveal. In the 1700s, Lakota Sioux began exploring the Yellowstone area and in the late 1700s, fur traders traveled the rivers into the Yellowstone region and tribes in the Yellowstone area began using horses.

Yellowstone is a super volcano. According to the NPS, Yellowstone exploded in a massive volcanic eruption about 631,000 years ago, which blew volcanic ash and gas — 8,000 times the ash and lava of Mount St. Helens — into the air over much of the land mass that makes up the United States, including Arkansas. As the underground magma reservoir emptied, a giant crater, or caldera, formed. The caldera makes up much of the South Loop including Yellowstone Lake, which is dotted with underwater geysers.

On Aug. 17, 1959, a magnitude 7.5 earthquake struck west of Yellowstone at Hebgen Lake, killing campers in Gallatin National Forest and affecting infrastructure and thermal areas in the park. At its time, it was the second-largest recorded earthquake in the continental United States in the 20th century, according to the University of Montana (UM). It still is among the largest recorded in the States, and the effects of the quake are still observed today.

Today, the Madison River Canyon stretches for several miles west of Hebgen Lake, a large, manmade reservoir. The Hebgen Dam, completed in 1914, sits at the head of the canyon barely out of sight of U.S. 287. Flowing both in and out of the lake is the Madison River, world renowned for its blue-ribbon fly-fishing. 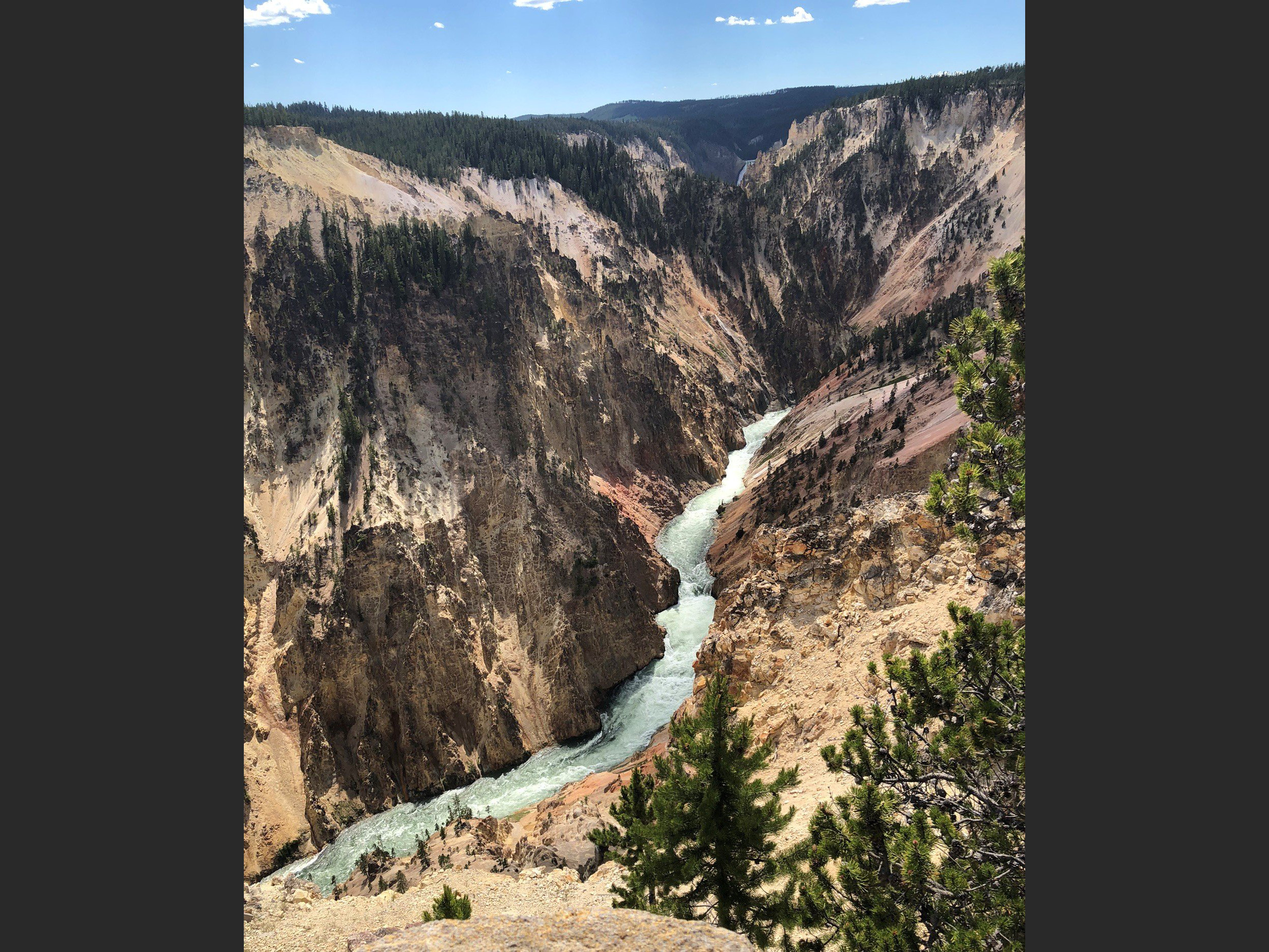 The Grand Canyon of the Yellowstone River is located near Canyon Village on the east side of the lower loop in Yellowstone National Park. Hot water acting on volcanic rock created the canyon’s colors. (Special to the Democrat-Gazette/Jeff Thatcher)
WHOLE LOTTA QUAKIN'

Prior to the quake, the Madison flowed from the dam outlet through a tucked-away canyon of the Madison range toward Ennis. On each side of the timber-laden valley sat steep slopes coated with rocky outcroppings and dense forest. At the foot of the canyon, the river dropped in elevation, entering the expansive Madison Valley. Just before the foot of the canyon sat Rock Creek Campground, a then-popular resting ground for tourists visiting Yellowstone National Park.

The initial quake lasted less than a minute, according to UM. "Within mere seconds, the ground plunged downwards along the fault line, leaving behind a sheer 20-foot wall of exposed earth. Shortly following the massive quake, an immense slab of weakly affixed material detached from the canyon's north-facing slope and slid swiftly into the valley, snapping trees, and tossing thousand-pound boulders in a fierce disarray. As debris plummeted to the canyon floor, a new natural dam formed at the foot of the canyon several miles downstream from Hebgen Dam. Behind the slide, the Madison River flooded the canyon, engulfing trees and campgrounds alike and forming the beginnings of what is now known as Earthquake Lake."

If Yellowstone is on your bucket list, or you're eager to take a break from the hot and humid summer we've been experiencing in Arkansas, this would be a good year to go. The best airline connections that I've found are on American Airlines, which has flights from Little Rock to Dallas and then to either Bozeman or Billings, Mont., or Jackson, Wyo. If you fly into Bozeman, you can drive directly south to the West Entrance at West Yellowstone. From Billings, you can drive south to Cody and west to the East Entrance. From Jackson, you can drive north to the South Entrance.

Jeff Thatcher is a longtime resident of Little Rock.