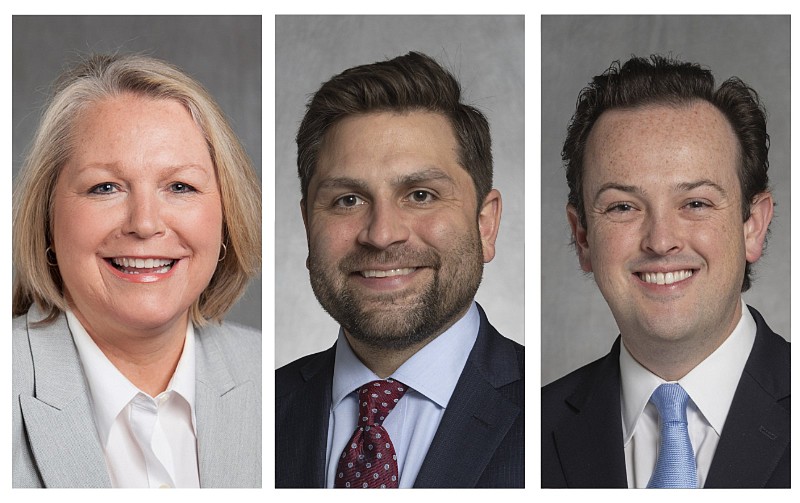 The temporary tax credit is dubbed an inflationary relief income tax credit in a draft bill.

Lawmakers also will consider accelerating the implementation of cuts in the state's top individual and corporate income tax rates that are scheduled to be phased in the next few years under current state law, and adopting a federal depreciation schedule for businesses in the tax cut legislation. They also will weigh providing $50 million in state funds to a reserve fund for a school safety grant program.

"We have to do much more to ensure that we are recruiting and retaining great teachers," House Democratic leader Tippi McCullough of Little Rock said. "That starts with a fair salary."

Asked why the proposed tax credit for low and moderate-income taxpayers would be temporary, while the proposed acceleration of the implementation of the cut in the state's top individual income tax would be permanent in next week's special session, Sen. Jonathan Dismang, R-Searcy, said that's because the income tax relief package enacted in the December special session was "front-loaded for middle- and low-income" taxpayers, effective Jan. 1, 2022.

Asked why the proposed tax credit for low and moderate income taxpayers would be temporary while the proposed acceleration of the implementation of the cut in the state's top individual income tax rate would be permanent in next week's special session, Hutchinson said, Friday in a written statement, that "While hundreds of millions of dollars remain in the pockets of Arkansans each year because of previous tax cuts, my goal with this special session is to provide quick relief to taxpayers to offset challenges related to inflation.

"The $156 million tax credit accomplishes this objective," he said.

According to the Tax Foundation, the top corporate income tax rate is 7.5% in Louisiana, 6.5% in Tennessee, 5% in Mississippi, 4% in Missouri and Oklahoma and zero in Texas, which instead has a tax on businesses' gross receipts.

"It prevents is us from falling further behind our neighbors," he said.

"Even though Texas and Tennessee have 0% income tax rate they have other tax differences," he said. "Arkansas is competitive with this reduction."

Rep. Andrew Collins, D-Little Rock, said Friday he plans on filing legislation under the call for the special session "as an alternative to the Republican bill that reflects our support for middle-class and working-class tax relief and business investment.

"Our bill doubles their inflationary relief tax credit and makes it refundable," he said in a written statement. "It makes an identical change to Section 179 depreciation [for businesses]. It leaves the top tax rates alone because we believe giving teachers a raise should be a higher priority than another tax cut for top earners."

Collins said he projects his bill would reduce state general revenue by about $367 million in fiscal year 2023.

The finance department projects this proposal will reduce general revenue by $156.3 million in fiscal 2023.

The federal Section 179 depreciation schedule allows businesses to deduct the entire purchase price of new or used equipment up to $1.08 million in 2022 rather than capitalizing and depreciating the asset over the designated useful life of the asset, said finance department spokesman Scott Hardin. The $1.08 million deduction is reduced dollar for dollar if asset purchases exceed $2.7 million for 2022, he said.

Arkansas previously adopted Section 179 as it existed on Jan. 1, 2009, and the dollar limitation on the deduction is $25,000 and the dollar-for-dollar phase-out starts at $200,000, he said. The federal limitation is adjusted for inflation each year, he said. Arkansas doesn't plan on adopting federal bonus depreciation, which also allows 100% of the cost of equipment purchases to be written off when purchased, but does not have a maximum dollar limitation, he said.

Last month, $1.378 billion of the $1.628 billion general revenue surplus in fiscal 2022 was transferred to the general-revenue allotment reserve fund, and the other $250 million of the general revenue surplus was distributed to other funds as authorized by the governor and the Legislature, according to Hardin. He said $150 million was transferred to a restricted reserve fund for various improvements and projects, including a proposed prison expansion, that require a majority vote of the Legislative Council to fund, $50 million to the law enforcement officers' stipend grant fund, and $50 million to the state highway and transportation fund to match federal highway funds.

State Department of Education Secretary Johnny Key has pointed out that going into the 2022-23 school year, base salaries in Oklahoma, Missouri, Tennessee and Mississippi are all higher than Arkansas, and Mississippi just increased its base salary to $41,500 along with an approximately $5,000 salary increase for every teacher.

Hutchinson initially proposed raising teacher salaries to a minimum of $46,000 and implementing at least a $4,000 salary increase at a projected cost of $333 million. After some lawmakers balked at the cost of his initial proposal, the governor subsequently trimmed it to increase the minimum teacher salary to $42,000 a year and provide a $4,000 increase to every teacher for the 2022-2023 school year.

The trimmed-down proposal's total cost of $150 million for fiscal 2023 would come out of the fiscal 2022 surplus, and the public school fund would need $140 million in ongoing general revenue in fiscal 2024 under this proposal. The $60 million in additional needed funds would come from combined growth in the educational adequacy fund, educational excellence trust fund, and uniform rate of tax, according to Key.

Several days ago, House and Senate Democrats released a proposal patterned after Hutchinson's trimmed-down proposal to raise teacher salaries by $4,000 and raise the minimum teacher salary from $36,000 to $42,000.

They said their Raising Arkansas's Investment in Schools and Educators (RAISE) Act would use $600 million from the state's $1.6 billion surplus to create a fund that will allow the raises to be indefinitely sustainable based on current projections, and urged Hutchinson to include their proposed legislation in the August special session. Hutchinson declined to do so, saying, "The House and Senate leadership has indicated that there is insufficient support among the members for a teacher pay increase in a special session."

"I anticipate there will be increases in teacher pay as we move forward," and historically the best way to do that is through the House and Senate education committee's educational adequacy review, he said.

Key noted the General Assembly has taken action to increase teacher pay in every session from 2015 to 2021, "and I don't know a single legislator opposed to higher pay for teachers.

"Clearly, however, we must take additional action to increase teacher pay for Arkansas to attract and retain teachers and remain competitive with surrounding states," he said in a written statement.

"I am optimistic that we can still be a leader in the region for teacher salaries, and I am committed to working with Sen. [Missy] Irvin, Rep. [Bruce ] Cozart, and the education committees through the adequacy process to develop a plan that will accomplish that goal," Key said.