Putin’s squeeze on gas has delayed environmental plans by The Washington Post | August 7, 2022 at 1:59 a.m. 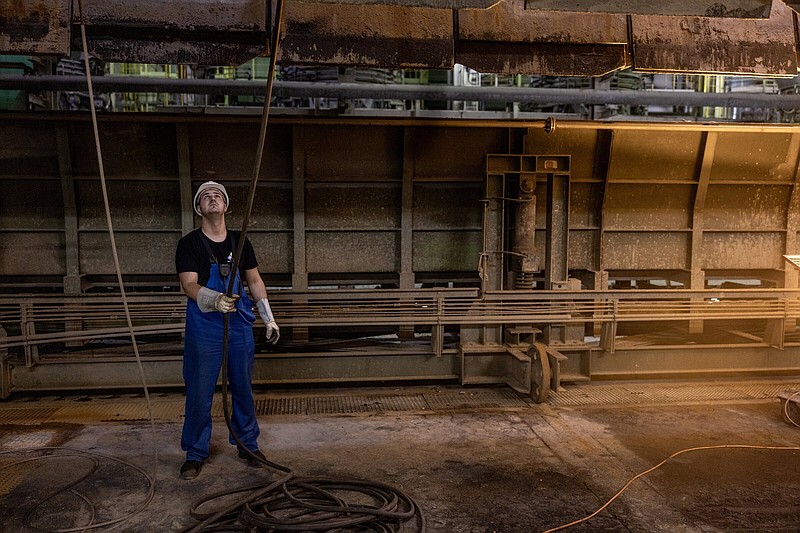 A worker conducts maintenance inside the Bexbach plant. MUST CREDIT: Photo by Daniel Etter for The Washington Post.

BEXBACH, Germany -- The last coal pits around Bexbach closed a decade ago, leaving the power plant puffing plumes of pollutants as a relic of a dying regional industry.

But now plant equipment is being repaired, contractors have come out of retirement, and manager Michael Lux is faced with a novel prospect: expanding the head count.

"It's a good feeling to be hiring," he said, as he sat down to discuss plans to transition Bexbach, in the southwestern German state of Saarland, from "reserve" status back to full capacity. By winter, Lux expects to be burning a minimum of 100,000 metric tons of coal a month, in what some in the industry have dubbed a "spring" for Germany's coal-fired power plants.

It's part of a pan-European dash to ditch Russian natural gas and escape President Vladimir Putin's energy chokehold. While the war in Ukraine has simultaneously turbocharged the European Union's race to renewables, fossil fuels still provide the quickest fix.

France, Italy, Austria and the Netherlands have all announced plans to reactivate old coal power plants. But nowhere are the plans as extensive as in Germany, which is allowing 21 coal plants to restart or work past planned closing dates for the next two winters.

That means a scramble for an industry that has been in its death throes in Germany. And some experts warn the coal revival may make it harder for the country to meet its climate goals.

Horst Haefner gestured toward the stacks of coal in Bexbach's storage yard: "Everyone wants to get rid of it, but they can't do without it."

Haefner, 70, agreed to come out of retirement to work at Bexbach, checking plant machinery he last inspected back in 2004. It beats pottering around in the garden, he said, as other workers took a break in the shade.

With temperatures hitting 91 degrees Fahrenheit, the day was so unusually hot for the region that the local beer garden had closed early for a "heat day." It was a reminder of why countries have pledged to cut their carbon dioxide emissions from fossil fuels such as coal -- and what's at stake if they don't.

As Putin puts a squeeze on natural gas flows to Europe -- in what E.U. officials claim is retaliation for their support of Ukraine -- Germany is trying to conserve energy. It is also urgently seeking replacement sources of power. And it has few options.

Ramping up renewables takes time. New liquid natural gas terminals are not yet finished. The government is considering keeping the last three nuclear power plants online beyond their planned end-of-year close date, but those account for a relatively small portion of the county's power generation.

The German government, which includes Greens as part of its coalition, has described the coal revival as a painful but necessary move -- and assures it will be temporary.

Germany has simultaneously committed to a new target of 80% of power from renewable sources by 2030 -- double the current contribution. It has begun to ease the permitting process for windmills and to invigorate a renewables rollout that many analysts say stagnated under former chancellor Angela Merkel.

This push, the government maintains, will help the country stick to its climate goals and end the use of coal by 2030.

"If it was happening in a vacuum and we didn't have all this other legislation paired, then I'd be worried," said Ysanne Choksey, a policy adviser for fossil fuel transition at E3G, a climate think tank.

But some experts voice concern about the short-term increase in emissions for Germany -- and about whether it will be harder for the country to meet that 2030 target: cutting emissions by at least 65% of 1990 levels.

To get there, emissions in the power sector need to be reduced "substantially and as soon as possible," said Simon Muller, Germany director of Agora Energiewende, a climate-focused nonprofit.

Yet Agora estimates that the fossil fuel plants that have been revived or allowed to stay open will add between 20 million and 30 million tons of greenhouse gases annually, equivalent to about 4% of Germany's total emissions.

Whether Germany will overshoot its budget of 257 million tons of carbon emissions for the power sector this year remains uncertain, Muller said.

"What is certain," he said, "is that only a massive rollout of renewable energies and grid expansion will break our dependence on fossil energy imports and put us on track to meet Germany's climate target for 2030."

In Germany last year, in part because of low winds and the already rising price of natural gas, hard coal and lignite accounted for 28% of electricity production -- contributing to a rise of a 4.5% in overall emissions over the previous year.

To be sure, it's not just Germany that is off-track. Despite global commitments to reduced emissions, last year was a record year for coal globally. As the world emerged from the pandemic and demand for power surged, more coal was burned for electricity generation than at any other time in history. This year is poised to break records again.

Claudia Kemfert, head of the energy and environment department at the German Institute for Economic Research, said even with a government that has put climate policy at the forefront, red tape that has held back the country's renewables industry has not been sufficiently stripped away.

"We will not meet climate goals in the short term," Kemfert said.

Leaning more on coal is now a "necessary step," she said. "We are paying the price of 10 years of failed energy policy."

It remains unclear how many of the coal plants that are now allowed to fire up fully will elect to do so this winter. Energy companies will be weighing the cost of necessary investments against potential profits. Last week, the Mehrum plant in Lower Saxony was the first to move out of reserve status, according to the Federal Network Agency.

Managers at Bexbach say the 40-year-old plant is aiming to return to full-time service, along with its sister unit, Weiher, about 14 miles west.

Just five years ago, power company Steag tried to shut these plants down, deeming them unprofitable as cheap gas flowed from Russia. The German government mandated they be put into "grid reserve" -- so they could be called on when needed to supplement imbalances in the energy grid, with running costs paid by the government.

Ramping up again brings challenges. In addition to getting the plants up to full working order, managers must find qualified staff and get in supplies.

Bexbach was built to burn local coal, but the area's last hard coal mine closed in 2012. Before the war in Ukraine, Russia had been supplying much of the coal imports used at German plants. Yet with an E.U. embargo on Russian coal coming into force in August, energy companies have had to look elsewhere: to South Africa, Australia and Colombia's Cerrejon mine, also known as "the Monster" and notorious for its poor environmental and safety record.

To get to an inland plant like Bexbach, that coal has to be hauled hundreds of miles by land or by train from the ports of Amsterdam, Rotterdam and Antwerp. And contraction in the industry has resulted in bottlenecks, with coal stocks at European ports piled up to a three-year high.

"The whole market has expected the downturn of coal consumption: the ports, the rail operators, the barging operators," said Stephan Riezler, head of trading at Steag.

For other plants that receive coal by barge, there's an additional problem of low water levels on the Rhine River, a logistics artery for German industry, with boats unable to fully load.

The government has now given priority to coal cargo on its railway lines, in an attempt to expedite deliveries -- which one transport alliance has warned could have a knock-on effect for public transportation.

As it ramps up, the industry is pushing for longer-term guarantees, which the country's Green Economy Ministry is unlikely to offer.

Alex Bethe, chairman of Germany's Association of Coal Importers, said there's a need for a "signal" from the government that "we have a five-year perspective in order to justify the hiring of personnel, doing investments and improvements."

Under the new coal law, plants like Bexbach that plan to get back in the market have been asked to fill their stocks to 180,000 tons of coal, which energy firms argue is a financial risk.

"So we are saying to the government: This is a wonderful idea, we want to save the country in the winter, but what we need is a credit line," said Riezler, as he sat down with plant managers to discuss what was needed to reenter the market.

Still, even with rising coal prices, there's money to be made, and managers say it's just a matter of ironing out the details.

"We'll do everything in our power to bring all of those millions of tons to the power plants," Bethe said.

Information for this article was contributed by Florian Neuhof of The Washington Post. 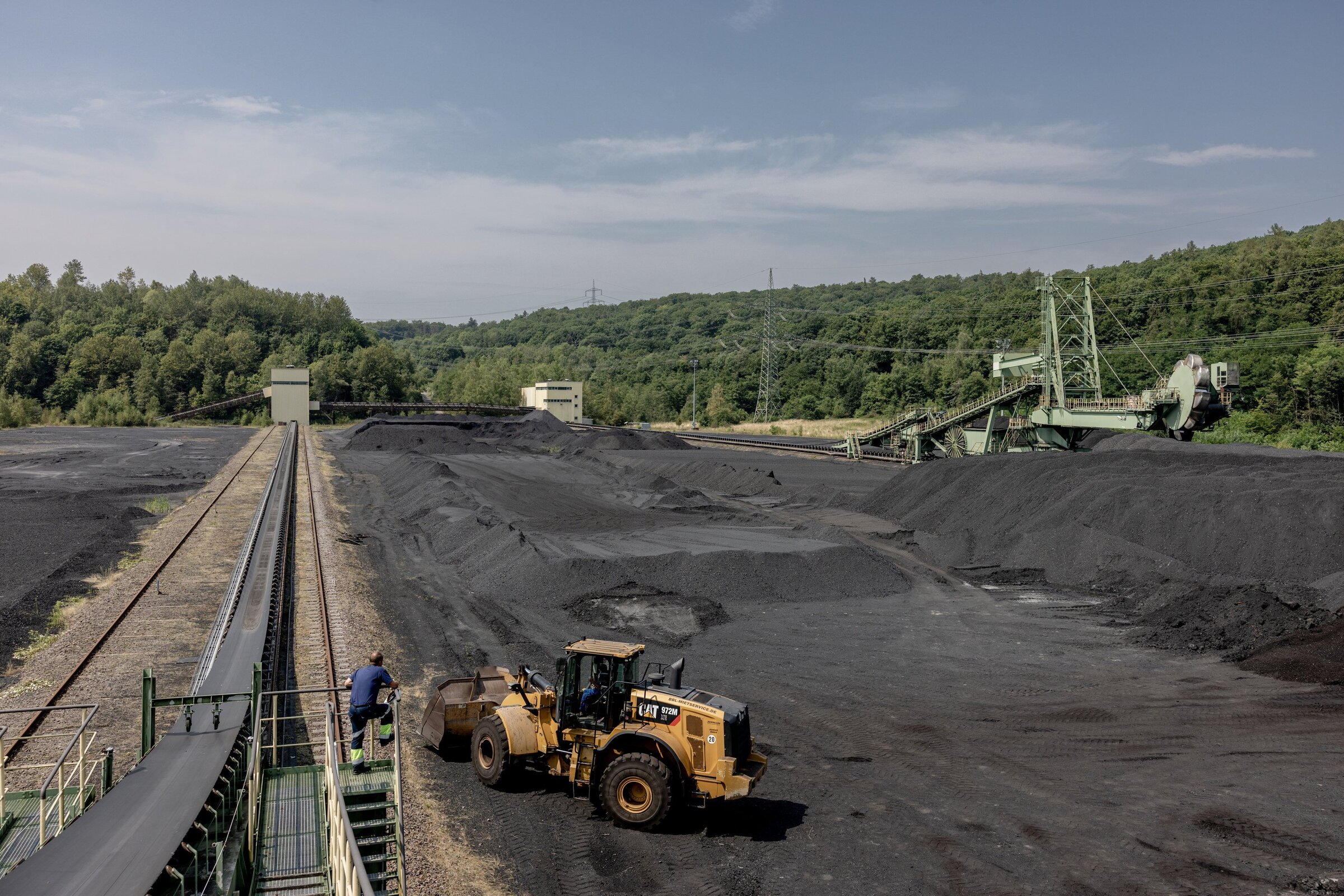 The power plant in Bexbach, Germany, is stocking up its coal depot in preparation for returning to full-time energy production. MUST CREDIT: Photo by Daniel Etter for The Washington Post.