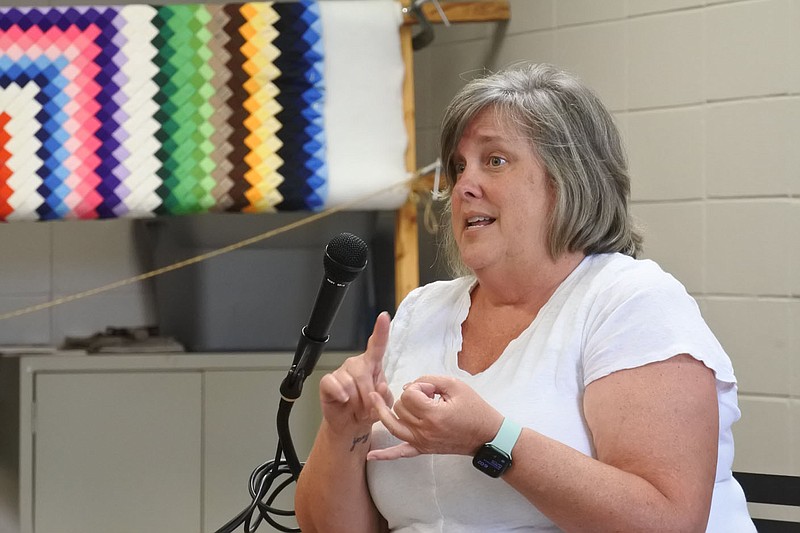 MOUNTAINBURG -- A River Valley mayor said her town could learn this summer if it will receive federal money to extend potable water service to about 625 households in north-central Crawford County.

Mayor Susan Wilson told residents at a public meeting Monday the city has completed most of the necessary paperwork to apply for money for the planned project through the U.S. Department of Agriculture Rural Development.

Wilson said a local Department of Agriculture representative informed her the department's "pretty much ready" to take the city's current project material to its national office for consideration after the city submits it by the Aug. 15 deadline.

She expressed hope the project will be for this year.

"We're hoping this all just kind of lines up between audits and surveys and studies," Wilson said. "We're meeting or exceeding our guidelines."

Mountainburg intends to apply for about $7.4 million in grants and loans from the Department of Agriculture for the project, as well as additional money from state agencies, according to Wilson. The town plans to take out the federal loan, estimated at $1.8 million, when the project is finished, to cover expenses.

Wilson has said households in a certain part of Crawford County -- between Mountainburg and Cedarville -- from the Washington County line south to Rudy, aren't served by any water system. Residents who want water to drink or use for other purposes, such as cleaning, have to either get it from wells or an outside source. Mountainburg buys water from Fort Smith.

Wes LeMonier of the Van Buren-based firm Hawkins-Weir Engineers said the project proposed to address this problem would entail adding 68 miles of pipe from Mountainburg's water distribution system to households in the affected area and cost about $12.4 million total. It would also mean building infrastructure such as water storage tanks, pressure-reducing valves and a new pump station, as well as improving three existing pump stations.

LeMonier estimated construction would take two years to complete in one phase.

Denise Wright, who lives about 15 miles from Mountainburg in the affected area, said Thursday she has confidence the Department of Agriculture will provide money for the project, citing the work Wilson put into it.

Wright said she began hauling water with her husband after the well on her property collapsed in 2005. Her husband has since died. Obtaining water involves making an about 30-mile round trip to and from the Lake Fort Smith Water Treatment Plant two to three times a week. Doing so takes about two hours each time. She could have spent taking care of other necessary business if her property had water service, she said.

"You have to schedule your whole life around how much water do I have, can I do laundry, can I water the vegetable garden," Wright said. "It becomes a way of life of what can I do today with how much water I have."

LeMonier said Flat Earth Archaeology of Cabot is doing a cultural resources survey for the area. This will determine whether the project will disturb things such as historic artifacts and sites.

Hawkins-Weir is scheduled to receive a draft of the survey Thursday , according to LeMonier. The firm will send the draft to the Arkansas Historic Preservation Program and 14 Native American tribes who have interest in the area for their concurrence, which it needs to finalize its environmental assessment for the project and secure Department of Agriculture funding.

"We're hopeful to have a draft Rural Development funding application in place that they can start reviewing all the requirements, but we won't have the final application submitted until we get that concurrence on that in the process," LeMonier said.

The Arkansas Department of Agriculture's Arkansas Natural Resources Commission awarded Mountainburg a $50,000 grant for the survey June 1, according to a news release.

LeMonier said the survey is part of the wider environmental assessment for the project, which the city will submit to the Department of Agriculture after Aug. 15. He estimates getting concurrence for the survey will take about 30 days and the assessment will be completed shortly afterward.

LeMonier said the city submitted a funding request to the state's Safe Drinking Water Fund in late July. The fund has multiple agencies associated with it, and the city doesn't know how soon the agencies could award money for the project.

Mountainburg is still trying to get 400 signed water-user agreements and matching $100 deposits from property owners in the affected area. Wilson set this goal to show funding agencies the water project would be sustainable if they approved financing for it. The deposits are included in the project's cost and will serve as the participants' "buy-in" for construction if it's funded.

County residents who don't provide the agreements and deposits will have to pay a tap fee if they want to have their property connected to the water project, according to Wilson. This fee is expected to be between $1,500 and $2,000, or $2,500 if a water line has to cross a county road to reach a specific property.

Wilson said the city has received 349 user's agreements as of Monday. She noted the city may have to change the agreements to reflect entities giving it money for the project. She believes more people will join the water system once it's built.

Mountainburg will have its next public meeting about the project at 6 p.m. Nov. 1 at City Hall at 101 U.S. 71 North, according to Wilson.