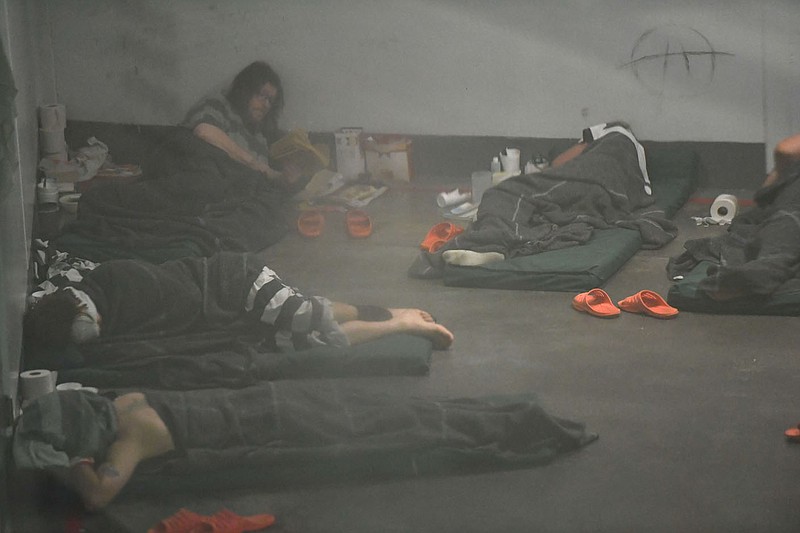 Detainees are gathered Friday, Aug. 5, 2022, in an area of the Washington County Detention Center in Fayetteville. A plan to expand the facility will appear on the ballot for voters in November. Visit nwaonline.com/220807Daily/ for today's photo gallery. (NWA Democrat-Gazette/Andy Shupe)

FAYETTEVILLE -- Washington County voters are being asked to approve a sales tax increase to pay for a bigger jail.

The Quorum Court has approved a special sales tax election for the Nov. 8 general election. County voters will be asked to approve a 0.25% sales tax increase to pay for up to $113.5 million in bonds to expand the county's jail and up to $28.5 million in bonds to pay for improvements to the county's juvenile court facilities. The sales tax increase will only go into effect if voters approve one or both of the bond issues. The tax would expire when the bonds are paid off.

Washington County now has a sales tax rate of 1.25%. The state sales tax is 6.5% and city sales taxes range from 1% in Elm Springs to 3% in Greenland, Lincoln, Johnson and West Fork, according to the Washington County treasurer's office. Fayetteville and Springdale both have a 2% city sales tax. Fayetteville and Springdale both also have 2% sales taxes on hotels, motels and restaurants for advertising and promotion.

Jay Cantrell, chief deputy with the Washington County sheriff's office and sheriff-elect, was with the sheriff's office in 2002. Cantrell said the proposal was seen to be widely supported and, while a committee was formed to support the plan, he remembered no organized opposition.

"We had a group of people who went around to the different civic groups and doing some public service announcements speaking in favor of it," Cantrell said of the 2002 campaign.

"I haven't heard anybody say what they might do this time," Cantrell said of the current election effort. "It's big, and it's important. I just can't answer about any organized campaign stuff yet. I don't have any detailed information."

Unlike 2002, there are opponents to the current jail expansion who are already organizing.

The Arkansas Justice Reform Coalition has called for a moratorium on any new jail beds in both Benton and Washington counties, arguing that alternatives to incarceration have yet to be explored by either county and should take precedence over bigger jails. Benton County's Quorum Court is considering putting a $206 million jail expansion project on the Nov. 8 ballot. That proposal is set to be considered at the Quorum Court's Aug. 25 meeting.

Sarah Moore with the Justice Reform Coalition said the group will work to persuade voters to reject the jail expansion in November. The group is planning a "Building Community, Not Jails" workshop from 6-9 p.m. Friday at St. James Historic Baptist Church, 764 W. North St. in Fayetteville, to "begin the campaign of no more jail beds in NWA."

"Just as we've been active for the past four years in our community, we're going to continue to advocate that we should build our community, not jails," Moore said.

Moore said Washington County has done nothing to explore alternatives to incarceration that already exist and have shown to be successful in other jurisdictions.

"We'd love to see the county invest $100 million in general fund revenue or new tax revenue in these programs that have proven successful," she said. "There are studies that have shown that for every $1 invested in recovery services, $7 comes back to the community. It's incredibly infuriating to see people doing the same thing over and over that doesn't work."

The proposed expansion already has been a campaign issue for some candidates for county office. Josh Moody, the Democratic Party candidate for county judge, and Patrick Deakins, the Republican Party candidate, say people are talking about it and asking them about it. County Judge Joseph Wood ran for lieutenant governor and will end his term in December.

Moody said he opposes the planned jail expansion and most of the people he has talked to are also opposed.

Moody said the county should explore alternatives to incarceration, many of which can be implemented relatively quickly, rather than adopting a jail expansion that won't offer any relief to the crowded jail conditions for two or three years. He also noted that the alternatives discussed would cost a fraction of the proposed $113.5 million cost of expanding the jail. Possible alternatives include a mental health court; better mental health and substance abuse treatment programs; and expanded pretrial services to help detainees who are awaiting trial get out of jail, stay out of jail and meet their obligations to appear in court.

Deakins said he supports the jail expansion proposal and most of the people he has talked to understand the need for it and will support it.

"Most people I talk to understand that the jail is an essential part of a functioning criminal justice system. People are definitely bringing it up. Any time you go to the voters and ask for a tax increase, that's a big deal."

Deakins said the people he has talked with say the jail is needed along with any pretrial programs the county might be able to demonstrate the value of.

Candidates for justice of the peace are also hearing from voters about the jail expansion proposal. In the race for the District 14 seat on the Quorum Court, Republican Gary Ricker faces Democrat Dawn Cannon for the seat vacated by Jim Wilson, who ran for the state House of Representatives in District 23.

Ricker, former police chief in Greenland, said he supports the jail expansion plan. Ricker said he has been in law enforcement for more than 30 years and is familiar with the jail and the problems it faces.

"Our population has grown and law enforcement has had to keep up with all the things that come with that," Ricker said. "I wish we didn't have to put people in jail, but we all know human nature better than that."

"Some people are against it because of the sales tax increase," he said.

Ricker said putting the proposal up for a public vote is the right way to handle a project this large.

"If the voters agree, we'll build it," he said. "If they don't, we'll have to back up and see how we need to proceed. A general election vote is going to give a true feel for what the people want."

Cannon said she has been trying to educate herself on the issue, taking a tour of the jail and doing "ride-alongs" with local law enforcement agencies. She said she doesn't support the expansion plan and thinks the county should try alternatives to incarceration first to see if the programs can reduce or eliminate the need for more jail beds.

The county's Criminal Justice Coordinating Committee, which is studying alternatives to incarceration and making recommendations to the Quorum Court, will continue its work without waiting for the results from the Nov. 8 voting, according to Prosecuting Attorney Matt Durrett. 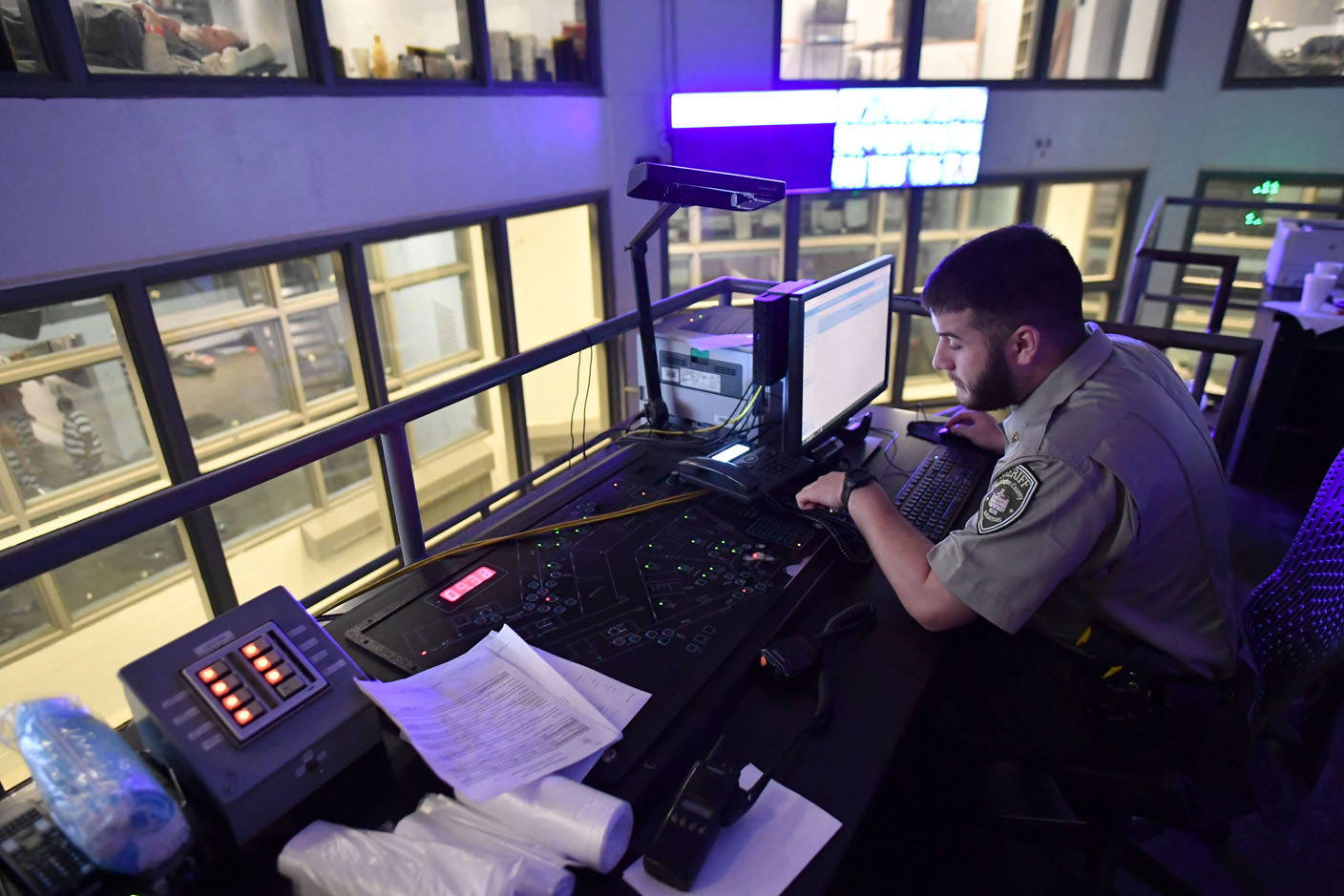 Cpt. Benjamin Velasco of the Washington County SheriffÃ•s Office monitors activity Friday, Aug. 5, 2022, in the Washington County Detention Center in Fayetteville. A plan to expand the facility will appear on the ballot for voters in November. Visit nwaonline.com/220807Daily/ for today's photo gallery. (NWA Democrat-Gazette/Andy Shupe) 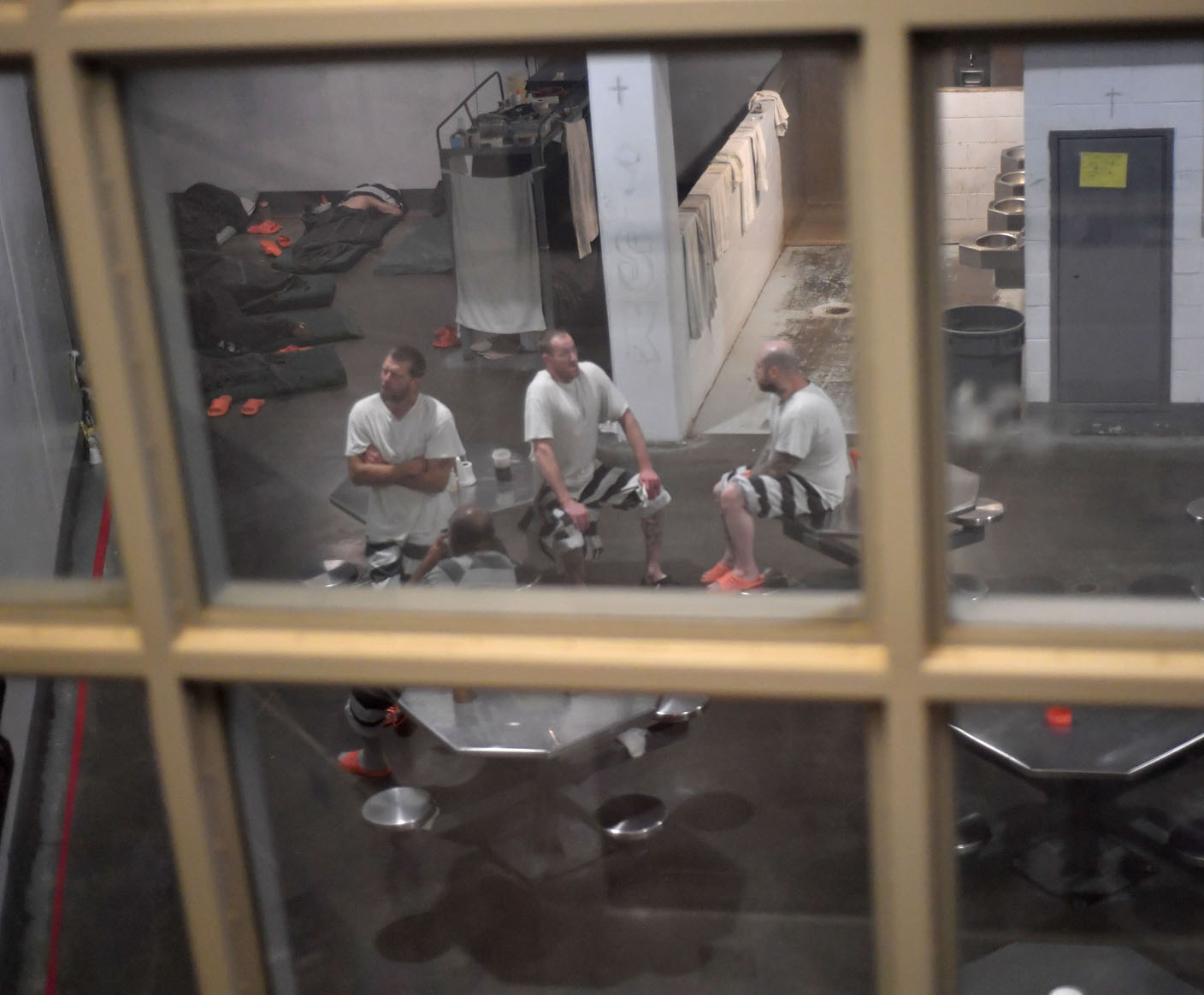 Detainees are gathered Friday, Aug. 5, 2022, in an area of the Washington County Detention Center in Fayetteville. A plan to expand the facility will appear on the ballot for voters in November. Visit nwaonline.com/220807Daily/ for today's photo gallery. (NWA Democrat-Gazette/Andy Shupe)