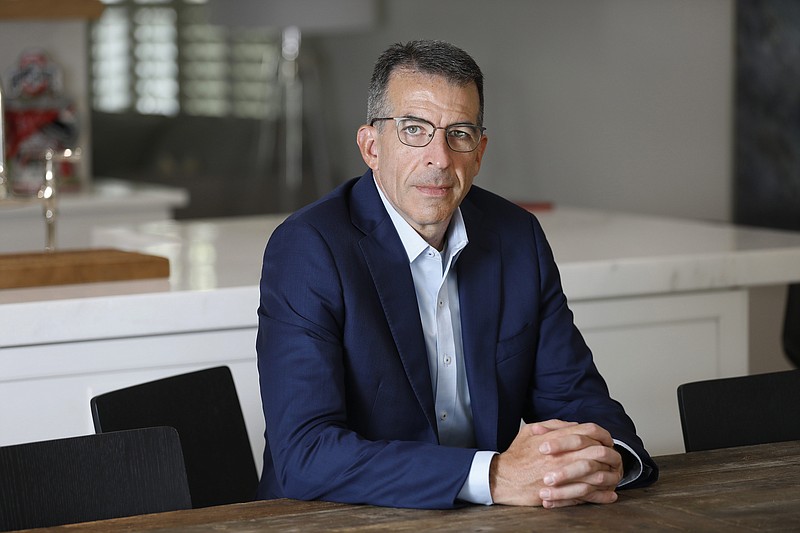 Jason Wojdylo, a retired U.S. Marshals official, tried for years unsuccessfully to convince the Bureau of Prisons to change its banking practices. MUST CREDIT: Photo for The Washington Post by Octavio Jones

The Federal Bureau of Prisons has been pushing back against efforts to make inmates pay much more of their court-ordered restitution to crime victims, in part because the money they would use helps fund salary and benefits for hundreds of agency staff positions, documents and interviews show.

Federal prisoner spending generates more than $80 million a year for the agency, mostly from profits on items like commissary purchases and phone calls, according to the Bureau of Prison's response to a public records request. Those documents also show that the agency earns interest from some accounts.

In Justice Department discussions in July, senior prison officials argued that the agency should not dramatically increase the amount of prisoner money turned over to victims, according to people familiar with the internal deliberations, who spoke on the condition of anonymity to describe the conversations. Any sharp uptick, the people described officials saying, would cut into a vital income stream at a time when the agency is already understaffed.

Jack Donson, a retired Bureau of Prisons case manager coordinator who now consults on the federal prison system, said the issue highlights a "dysfunctional" culture at the prison bureau, with officials focused on preserving the flow of money through commissary accounts, known within the agency as the "Trust Fund."

"At meetings, staffers often referred to the Trust Fund as a 'slush fund,' so I have always been suspicious of it," Donson said.

Over the last year, The Washington Post revealed that some high-profile inmates, including Boston marathon bomber Dzhokhar Tsarnaev and former USA Gymnastics doctor Larry Nassar, had sizable prison account balances yet paid very little of what they owed to their victims. Deputy Attorney General Lisa Monaco issued a directive to study the issue and make changes to the program.

How, or if, the Justice Department decides to set new rules could affect another high-profile inmate: R&B singer R. Kelly, who was sentenced in June to 30 years in prison for sex trafficking. Kelly has about $28,000 in his prison account, according to multiple people familiar with the case, and owes $140,000 in court-ordered fines, including a $40,000 penalty for a fund for human trafficking victims, according to court records. Prosecutors have yet to ask a judge to make the Bureau of Prisons turn over that money.

Kelly's lawyer, Jennifer Bonjean, said it was unethical for anyone at the Bureau of Prisons to share Kelly's data and noted there was already an investigation into how other details of Kelly's life behind bars had been leaked.

The controversy over inmate funds centers on two separate but related pools of money. The first are deposit accounts, in which the nation's nearly 140,000 federal inmates can keep an unlimited amount of money. These accounts are not subject to many of the regulations and scrutiny of regular bank accounts because the agency does not consider itself a bank. The total amount of money in the deposit accounts ballooned from $86 million to more than $140 million in 2021, in large part because prisoners received coronavirus stimulus payments, people familiar with the matter said.

The second pool of money is the commissary accounts, or Trust Fund, a means for inmates to buy things, like phone or email access, sodas and candy, with money from their deposit funds.

The Bureau of Prisons, according to documents provided in response to a public records request, makes interest off the Trust Fund, though the amount can vary wildly; last year the agency made just $29,526, but two years earlier the fund generated more than $1.3 million in interest.

The Trust Fund also operates as a kind of business, using the significant markups it charges inmates on purchases to pay for agency staff. Last year, the Trust Fund paid $82 million to fund 652 positions at the Bureau of Prisons -- $49.5 million in salaries and $32.5 million in benefits, according to agency records.

In a written statement, the agency drew a sharp line between the two pools of money, insisting the inmate deposit fund does not profit off inmates' money, while not acknowledging that the Trust Fund money generates tens of millions of dollars a year that is used for salaries and benefits.

Separately, through the public records request, the agency acknowledged that the commissary money, the Trust Fund, does earn interest for the Bureau of Prisons.

For years, the Bureau of Prisons has argued that whatever balance inmates may have in their accounts, they should only be required to pay $25 every three months to any court-ordered victim restitution.

In early July, as Monaco's office considered how much to increase what inmates have to pay toward court judgments, senior Bureau of Prisons officials asserted that no more than 25% of an inmate's prison account should be taken, people familiar with the conversations said. The officials noted that reducing the amount of money in the accounts could also reduce the amount in the Trust Fund, thus cutting into the agency's revenue, these people said.

The agency's proposal was met with resistance from other parts of the Justice Department, according to people familiar with the debate, which is ongoing. Officials are now considering an option in which the maximum amount taken from a prisoner to pay court orders would range from 25 to 75%, depending on the overall account balance.

Prosecutors and other law enforcement officials have been pushing to fix what they see as a glaring, unjust contradiction in the current system: The Bureau of Prisons zealously guards the money of convicted criminals who have been ordered by other parts of the government to make payments to their victims.

Prisoners are allowed to spend only about $400 a month through the commissary system, yet some keep many thousands in their accounts. More than 20 inmates had prison account balances of more than $100,000 each, The Post reported last year. It can be difficult for convicts to get a traditional bank account.

Critics of the Bureau of Prisons system say the agency's accounts often shield money that should go to court-ordered restitution or child support. Under the current rules, prosecutors have to ask a federal judge to order the agency to turn over significant amounts.

Lawmakers have also begun pressing the Justice Department to change the system.

"BOP has a responsibility to make sure inmates are making good on their judgments owed ... victim restitution, child support and the like," Sen. Charles Grassley, R-Iowa, said recently after being told of The Post's findings. "These important judgments should not go ignored while BOP is taking a cut from inmates buying snacks at the commissary."

In the Tsarnaev and Nassar cases, prosecutors eventually filed court papers seeking a judge's order to force the agency to turn over funds to cover larger payments. Before they did so, Nassar had spent more than $10,000 from his prison account on other purchases, according to a court filing, while paying victims about $100 a year. He had been ordered to pay tens of thousands in restitution.

By the time prosecutors asked a judge to seize Tsarnaev's prison funds in January, he had received $21,000 in deposits, including $1,400 in pandemic relief funds. He had spent all but about $4,000 on purchases from the Trust Fund.

In another past case, a Tennessee bank robber wrote to a federal judge saying Bureau of Prisons officials were preventing him from paying what he owed his victims. He asked the judge to intercede and force the agency to give them his money.

Federal inmate accounts are not subject to the same criminal and regulatory scrutiny as bank accounts of non-incarcerated people. Although the Bureau of Prisons operates accounts for inmates and issues checks and money transfers from those accounts on their behalf, the agency does not consider itself a financial institution. Nor does it run bank transactions through a Treasury Department screening program meant to flag outstanding debts, officials said.