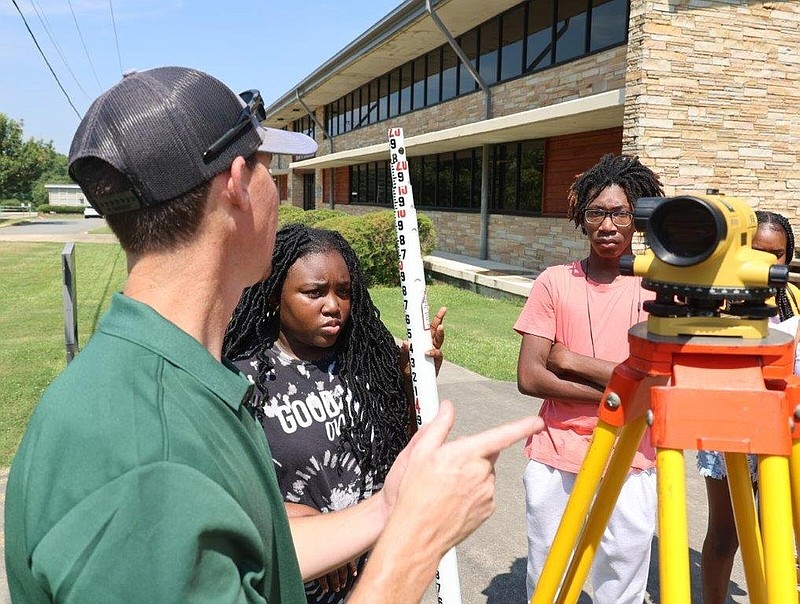 To show that math has real-world applications, Michael Blazier posed a problem to a group of high school students: How do you calculate the amount of usable wood that can be extracted from a forest.

"Imagine going out to 200 acres of forest with a million plus trees on it," he said. "You can't measure every one of them, so what we do is take a sample of them."

From that, Blazier demonstrated how simple mathematical formulas can be used to solve what seem to be vast problems.

Blazier is dean of the College of Forestry, Agriculture and Natural Resources at the University of Arkansas at Monticello.

The summit's mission is to work within rural and urban communities to provide the best benefits in areas of youth empowerment, STEM education, summer youth internships, community beautification, volunteerism, helping the disadvantaged and etiquette training.

KCTS President Brenette Wilder sees this camp as a way to give back. Wilder is a University of Arkansas graduate with a degree in chemical engineering.

She is from Altheimer, and her husband is from Wilmot, both in southeast Arkansas.

"My goal is to give back to the community of Wilmot," she said. "STEM was a subject that kids were not introduced to in a hands-on way. We want our kids to be exposed to STEM opportunities both inside and outside the classroom.

"If I can do it, they can do it," Wilder said. "And I want them to see that STEM is fun. It doesn't have to be seen as too tech or too challenging. They can do it if they have an interest in it."

Campbell said she wants to be a marine biologist.

"The instructors have been really cool," Campbell said. "They are good at explaining things so we can understand. It's a cool program; it is good stuff to experience."

Galloway said he wants to be a video game developer, barber or maybe a chiropractor.

"When it came to the land survey," Kylan said, "it was interesting."

While he said he didn't see a career in agriculture or surveying, he did say that moving cattle from pasture to pasture and calling the cattle were highlights.

"I would recommend it. We got a lot done in the amount of time we had," Galloway said.

"This is a pilot scale program this year," Blazier said. "We had a small class every day for the last two weeks. We participated in the Kansas City Teen Summit in hopes this will generate enough interest that it will build this program upward.

"I think it's a very important initiative to reach out to underserved students because we want to make sure our students in the college at the University of Arkansas at Monticello are reflective of the society we operate in," Blazier said.

"My goal was to teach them how to become a professional land surveyor," said land survey instructor Robert Blakeley. "If you see any building being built, roads being built, any property boundaries needing to be surveyed, that's what we do."

"We used an automatic level to shoot an elevation from one location to the other. We also used a total station to measure distance and angles and finished with a GPS base and rover to carry coordinates from one location to another. This was exposure to the land survey equipment. To explain to them what land surveying is. Most people don't know what we do," said Blakeley.

"I wanted to make sure they understood what the field was all about, at least in general," White said. "I wanted them to understand what I do as a wildlife ecologist within the greater field of wildlife population and wildlife ecology."

White explained to the students what wildlife population ecology is as a career opportunity. As props to describe the career field, White used electronic monitoring collars for animals.

"After discussing the scientific discipline and talking about the importance of wildlife conservation management based on scientific principles, I emphasized the radio telemetry research that I do, which involves animal capture and attaching radio collars on the animals to get locations any time of day or season, year after year," said White.

Blazier said he felt there was great class response.

"I showed them how to age a tree by pulling tree rings out," said Blazier. "They got to take some tree cores samples home with them. We taught them how the thickness of the rings would teach them how wet of a year it was or how droughty the year was. We showed them how we use lasers, trigonometry, and sonar to measure the dimensions of trees in field conditions," Blazier said.

Two days were spent on animal science. UAM farm manager Greg Montgomery took the students to the pastures, where they were exposed to sheep and cattle. Montgomery engaged students by moving a cattle herd from one pasture to another.

There they received a lesson on forage and its importance to the livestock. Students guessed the weight of Montgomery's prized bull. Estimates were anywhere from 300 to 600 pounds. Montgomery stunned the students when he told them that Sumac weighed in the neighborhood of 1,400.

"Most of these kids have not been around forestry or animal science. All of this is new," Wilder said. "Minorities are not represented in this area. They do not realize the opportunities for careers in this area, and we want to expose them to this."

"One of the things I was trying to emphasize is it's great to be in the classroom, but it's even better to have hands-on opportunities," Wilder said. "In animal science, to be able to touch, and in forestry to measure a tree instead of just enjoying the shade of it."

"We hope that our kids find an interest in UA Monticello here that they may even want to come here to pursue their careers. It would be fantastic to bring their high school learning back to where it started," she said.

For information on the STEM Camp, people can call UAM College of Forestry, Agriculture and Natural Resources at (870) 460-1053 or email at CFANR@uamont.edu.

Brenette Wilder can be reached at (816) 287-2167. Email at wilderbrenette@gmail.com. The Kansas City Teen Summit webpage is www.kansascityteensummit.org.

A video of the STEM Camp is available at https://youtu.be/i5OZ-2YvaW0 .

Lon Tegels is with the College of Forestry, Agriculture and Natural Resources at the University of Arkansas at Monticello. 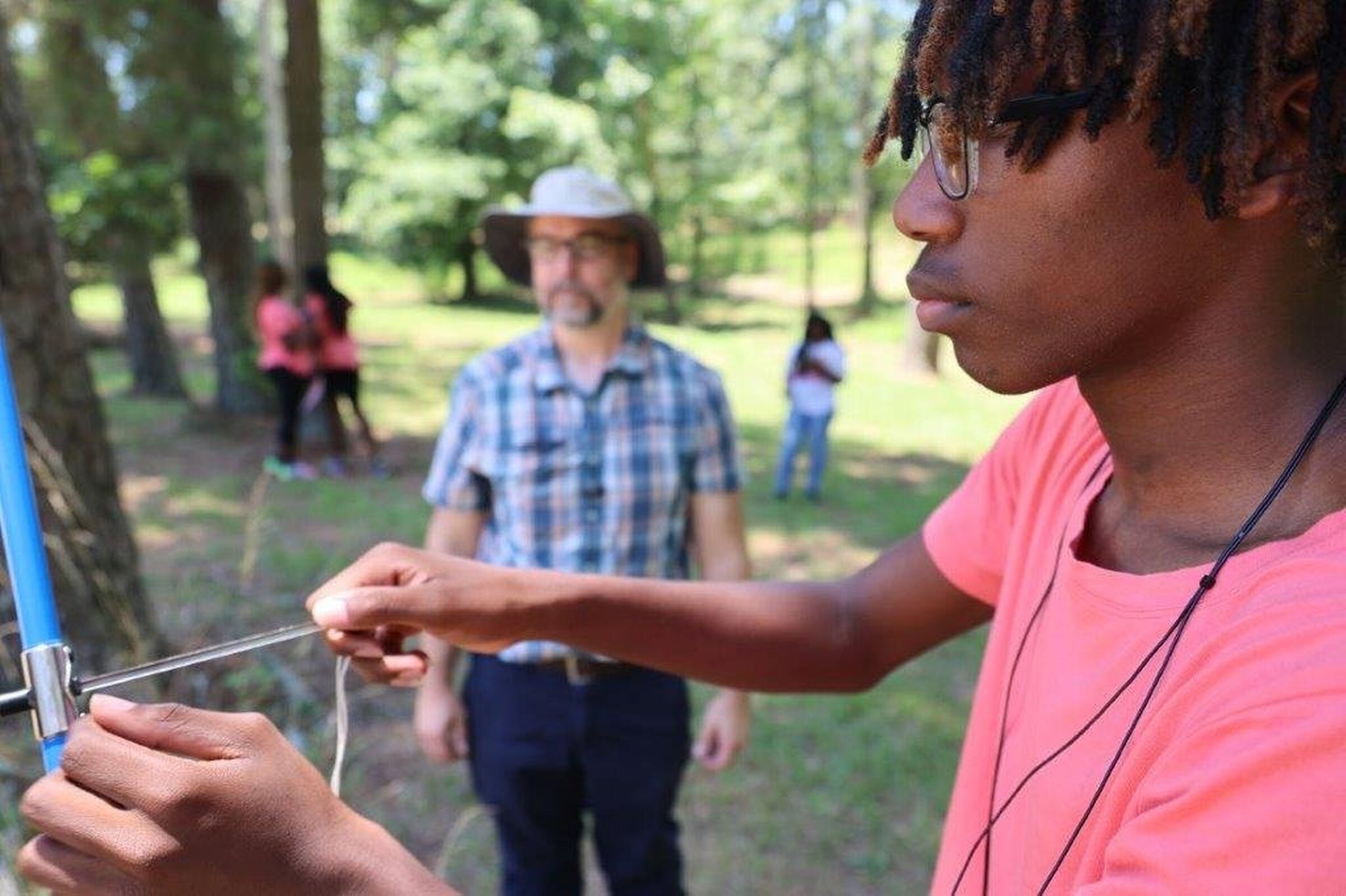 UAM Dean Michael Blazier of the College of Forestry, Agriculture and Natural Resources works with 11th grader Kylan Galloway of Hamburg High School. Blazier taught students how to measure the diameter of trees and pull core samples to estimate the age. (Special to The Commercial/University of Arkansas at Monticello) 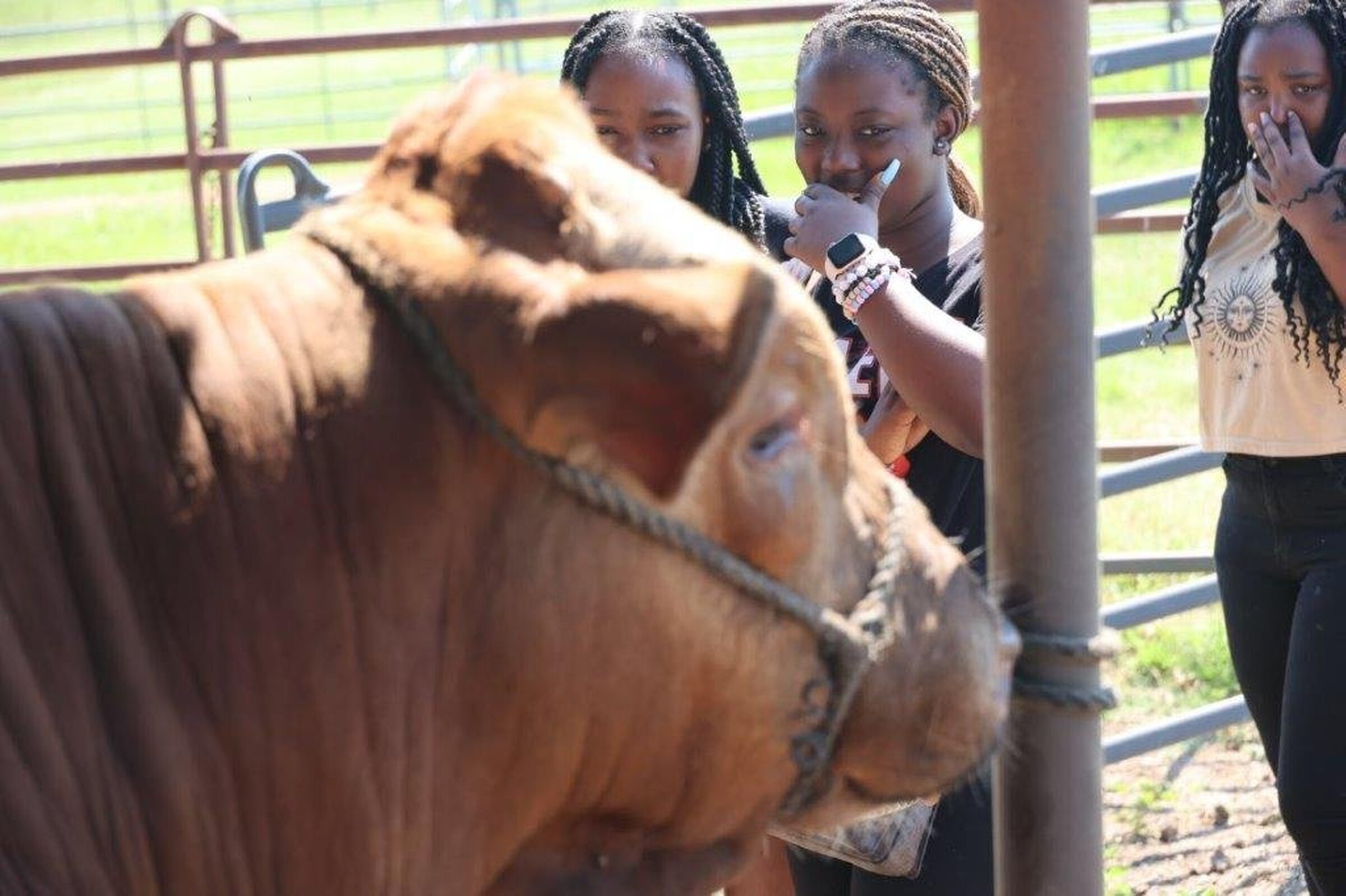 A’layhsia Dunn and ZaKiyah Diggs, ninth graders at Hamburg High School, guess the weight of Sumac. The bull came in at 1,400 pounds. The animal science lesson was part of the UAM STEM Camp, a pilot program offered in conjunction with the Kansas City Teen Summit. (Special to The Commercial/University of Arkansas at Monticello)