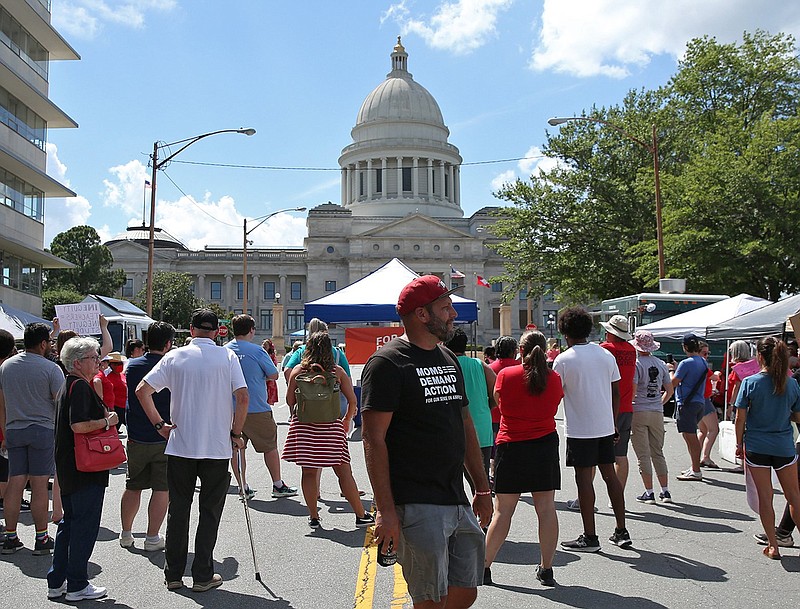 Supporters of legislation to provide pay raises to Arkansas teachers attend a block party prior to a rally on the steps of the state Capitol on Sunday, August 7, 2022. The rally and a block party were organized by the Pay AR Teachers movement to urge lawmakers to add educator pay raises to the agenda of a special legislative session scheduled for Monday, August 8. (Arkansas Democrat-Gazette/Colin Murphey)

Teachers, students and supporters from all over Arkansas gathered Sunday at the state Capitol to demand teacher raises, while Arkansas Democrats in the Legislature are planning to file a bill this week to raise teacher salaries with or without Republican support.

An estimated 500 to 600 people gathered in front of the state Capitol on Sunday afternoon as part of the PayArTeachers rally and block party. Music was played, food was served, and faces were painted.

The main theme of the day was demanding legislators add teacher raises to the special session agenda.

"Legislators need to make Arkansas children the number one priority," Gwen Ford Faulkenberry, a teacher and director for the nonprofit organization AR Strong, said."If it doesn't happen, elections are in November. Actions have consequences ... There are 30,000 teachers in the state and each one of us has a sphere of influence. If we stick together and stay on the same page we can decide who will represent us from the Governor's office to every other race."

Rep. Megan Godfrey, D-Springdale and a former educator, told the Arkansas Democrat-Gazette that Democratic legislators are planning to file their teacher pay raise bill during this week's special session.

"We still have a few days to see if we can get some Republican support, but we will file the bill," she said.

The event was organized by For AR People, a nonprofit organization that has been one of the driving forces behind getting teacher pay raises on the radar of legislators.

"I think one of the most impressive things from this event is the amount of people regardless of where they fall on the political spectrum support this issue," Gennie Diaz, executive director at the For AR People organization, said. "The support we have seen across the state has galvanized us."

Sadie Kirk, a senior at Parkview High School, said she decided to attend the rally because her teachers have done so much for her and she wanted to help them.

"They have the most important job in our society and receive some of the lowest pay," she said, mentioning how her biology teacher helped her have the confidence to get a degree in Neurology.

Arkansas Democrats in the Legislature released a plan in late July to raise Arkansas teacher salaries by $4,000 and raise the minimum teacher salary to $42,000, and urged Republican Gov. Asa Hutchinson to include their proposal in the upcoming special session on tax cuts and school safety grant funding.

Hutchinson subsequently trimmed his proposal to increase the minimum teacher salary to $42,000 a year and to provide a $4,000 increase to every teacher for the 2022-2023 school year.

Several Republican legislative leaders have said they want to wait for the House and Senate education committees to complete their biennial education adequacy review this fall and consider raising teacher salaries in the 2023 regular session, which starts in January.

The purpose of the rally held at the Capitol steps on Sunday was to reminded legislators that eyes are watching their decision on if to include teacher pay to the special session agenda.

"We believe that Arkansas educators should have liveable wages," Diaz said. "The work they did during the pandemic showed how dedicated they are to show up for their students. Now it's our turn to show up for them."

Rep. David Tollett, R-Marvell and an educator, also spoke at the event saying it's time for educators to be heard.

"We have been silent for way too long," he told the crowd. "While being silent we have seen our profession decline. Let's be clear, we are here to expose the systemic problem of teacher shortages across the nation and in Arkansas. We aren't asking to be rich. We are asking for a professional liveable wage because our teachers are the backbone of all other professions."

Tollett said using the surplus funds for teacher raises is an investment, but he believes Arkansas children are worth it.

"We have seen teacher raises but it hasn't kept up with inflation and the salaries of surrounding states that are poaching our educators," he said. "You get what you pay for and so lets pay for the best future for future generations."

Republicans on the Arkansas Legislative Council last month rescinded its approval of $500 million in spending authority for the state Department of Education to disburse funds under the federal American Rescue Plan's Elementary and Secondary Schools Emergency Relief Fund and then granted back $42 million of that spending authority.

The decision means school districts will have to decide whether to use Elementary and Secondary School Emergency Relief funds for bonuses. Each proposed use of the federal funds must receive approval from the Legislative Council.

Hutchinson said last week that he was disappointed by the Legislative Council's decision because he doesn't believe it is the best approach to helping teachers.

Teachers who spoke at the rally mentioned a bonus is no longer a solution to the growing problem of teacher shortages due to low pay.

Leron McAdoo, an educator and community activist, said bonuses are nice but they don't help retention.

"I was almost able to get on welfare and that is with a bachelor degree and two masters," she said. "If I can't support my babies how am I supposed to support the ones we are teaching?"

Mauldin said teachers value their students and it's time they recieved the same from their legislators.

"There is a saying that the first shall be last and the last will be first," she said. "We have been last for too long. It's time to put us at the top."

Holly Howard, a teacher at Bentonville High School, said many teachers are forced to leave the classroom for education administration jobs or things outside the industry just to be able to support their family.

"It's the cycle we see where the only way to move up in pay is to move out of the classroom," she said. "We are losing our best educators because they have to feed their family."

Donald Williams, a classified educator at North Little Rock High School, said it's time for classified personnel and teachers to see the pay for the work they do with other people's kids.

Diaz said she wanted legislators to know if they decided to ignore the cries of teachers to add teacher raises to the agenda then they will show up again in November to hold them accountable at the voting booths.

"Our state legislators have a lot of power in our state and they can make people's lives better or worse," she said. "We can use our collective voices to make sure they do right by all of us."

CORRECTION: An estimated 500 to 600 people gathered Sunday afternoon in front of the state Capitol for a rally in support of teacher raises, according to Capitol police. An earlier version of this story underestimated the crowd’s size.