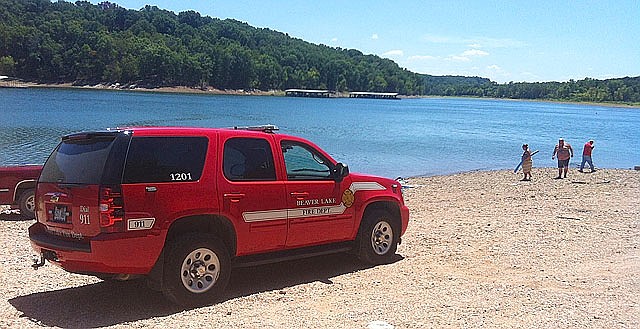 Beaver Lake Fire Department calls for a recovery team for a possible drowning at Beaver Lake off of Old Prairie Creek Road.

Some residents who live in a proposed Beaver Lake Fire District object to the proposal that could increase the dues they pay for fire protection.

John Whisenant, Beaver Lake Fire Department chief, filed a petition with the Benton County Clerk's Office on July 6 with the intent to establish a fire district.

Sheila Gallagher, who lives in the Prairie Creek area, said she pays $150 per year or $12.50 a month to the fire department. She spoke out against the proposal at the July 28 Quorum Court meeting. If a fire district is established, residents will have to pay based on the appraised value of their homes, Gallagher said.

Each resident now pays $150 per year, but he believes it isn't an equitable system, Whisenant said.

Prairie Creek Marina has millions dollars worth of items on its property, but pays $150 per year for fire protection, he said. It's the same as someone who owns a 700-square-foot trailer house, he said.

The petition describes the boundaries of the proposed district and sets the maximum levy at 0.325% of the property's appraised value as determined by the county assessor, according to the fire department's Facebook page.

"That's more than four of the staffed fire stations in Rogers," he said.

Voters approved in 2017 an increase in the annual fire due from $75 to $150, and Whisenant said it was clear then the department would seek other funding opportunities.

George Spence, county attorney, explained the law to the justices of peace at the July Quorum Court meeting. After a petition is certified, the Quorum Court must hold a couple of public hearings, the first within 60 days, he said.

If the justices of the peace adopt an ordinance to set up a fire district, it triggers a process where the court has to hold another hearing in the district within 60 to 90 days, Spence said.

The justices of peace can decide at the second meeting whether the majority of people at the meeting oppose or favor the ordinance by polling those in attendance, or opponents can circulate their own petition.

Spence said it's an odd statute because it allows voters "to get a petition at 10% and then you have to get 50% to beat it," he said.

He said the 0.325 rate is the maximum, but it could be lower. He said maximum rate is required to be put on the petition.

Whisenant said the board overseeing the district will set the rate, adding he will not present a budget requiring the maximum rate.

"At the end of the day, the department needs more revenue," he said. "We can't keep up with the services for the same revenue."

Curtis Hathcock also spoke against the measure at the July meeting. He is working with others on a petition to oppose establishing the fire district, he said.

Hathcock understands the department may need more money, but the increase needs to be reasonable, he said. The possibility exists if someone owns a $1 million home that the dues could go from $150 to $2,500, Hathcock said.

He said he knows someone who's lived in the area for 20 years, and his home increased in value over the years to a million dollars. He's a wounded veteran and lives on a fixed income, Hathcock said.

Ken Farmer, a justice of the peace, said he's heard from several people concerning the proposal.

"All of them opposed to the increase," Farmer said. "Even though the is technically not a tax, it has the same effect without some of the limits on property tax. It will also be levied on the appraised value of real estate rather than assessed value like property taxes."

Farmer thinks an increase that large should only be done with an election.

Joseph Bollinger, a justice of the peace, agreed to the issue should be put to a vote.

"While the current proposal is legal, I believe it is not the right thing to do for the people who live within that proposed district," Bollinger said.

Whisenant said the department will have to seek a special election for an increase in the fire dues if the fire district proposal is rejected.