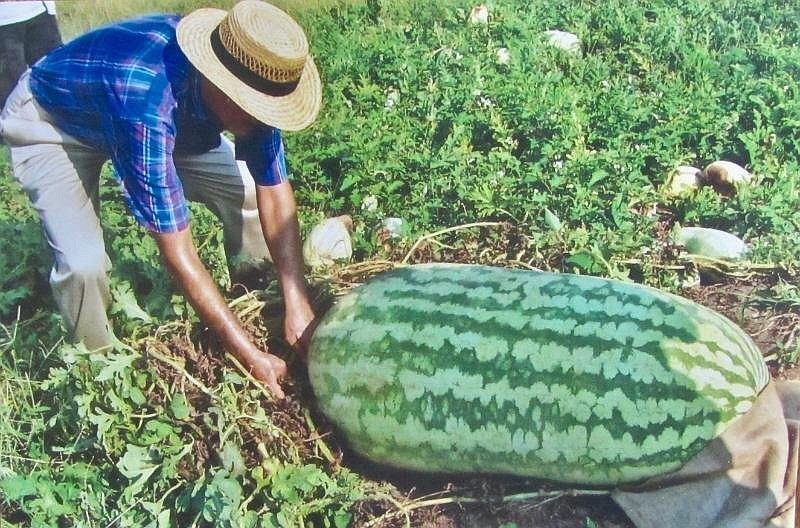 Lloyd Bright shows off a 268-pound Hempstead County melon he grew in 2005. (Special to the Democrat-Gazette/Marcia Schnedler)

The picture, taken in 1980, shows then-Gov. Bill Clinton at the Hope Watermelon Festival in the southwest Arkansas community where he was born on Aug. 19, 1946. Several slices of melon add delectable color to the bottom of the image.

Clinton now ranks as a political elder statesman who visits Hope only occasionally. The watermelon festival went dark in 2020 due to the covid pandemic. It returned with precautions last year and is primed for flavorful fun this Thursday through Saturday.

Although the first Hope festival took place 96 years ago, this will be only the 46th such event for the self-styled "Watermelon Capital of the World." That's because the woes of the Great Depression brought a long hiatus from 1931 until revival in 1977.

Gallery: Sightseeing — A Slice of Hope

Avid participants and excited spectators will enliven those playful undertakings. But the most popular feature of the festival, according to Christy Burns, director of the sponsoring Hope-Hempstead County Chamber of Commerce, "is food, food, food! We'll have the usual wide variety."

Dozens of concession booths will purvey a cornucopia of edibles, with cool watermelon slices in the starring role. Competitive feasters can take part in watermelon-eating derbies, where speed of consumption is the aim. Another melon-spawned sport is the seed-spitting contest, where distance is the winning factor.

Given Hope's perennial pride in the heft of local watermelons, a much-awaited event is the weighing of heavyweight competitors on Thursday evening. The grower of the largest melon will receive a trophy.

Admission is free to the grounds of the festival, whose 2022 theme is "Rockin' It to the Rind." There is a charge to attend the Saturday concert by Uncle Kracker on the CMC Stage inside Fair Park.

Festivalgoers can combine the juicy joys of melons with figurative time travel to a few Clinton locations. Copious photos and other memorabilia at the visitor center take him from "A Place Called Hope" to the White House and beyond. His winning 1992 and 1996 presidential campaigns are thoroughly celebrated.

Bowls painted as watermelons are displayed at Hope’s Visitor Information Center. (Special to the Democrat-Gazette/Marcia Schnedler)
The 42nd president's boyhood is detailed at the President William Jefferson Clinton Birthplace Home National Historic Site, 117 S. Hervey St.. He was actually born in Julia Chester Hospital, then lived on Hervey Street until age 4 with his widowed mother, Virginia Kelly, and her parents.

On display are two pieces of furniture, a gold-patterned sofa and an oval coffee table, that were in the house when he lived there. The remaining period furnishings reflect the life of ordinary Arkansans in the first years after World War II.

Clinton's second childhood home in Hope, at 321 E. 13th St., can be viewed from the outside but is not open to the public. He lived there from age 4 to 8 with his maternal grandparents before his mother remarried and moved him to Hot Springs.

Whether a visitor still loves Clinton or still loathes him or doesn't really care anymore, a tour of the so-called birthplace home serves as a reminder that his path to the White House began under modest circumstances. He was not born with a silver spoon in his mouth — only with a silver tongue.